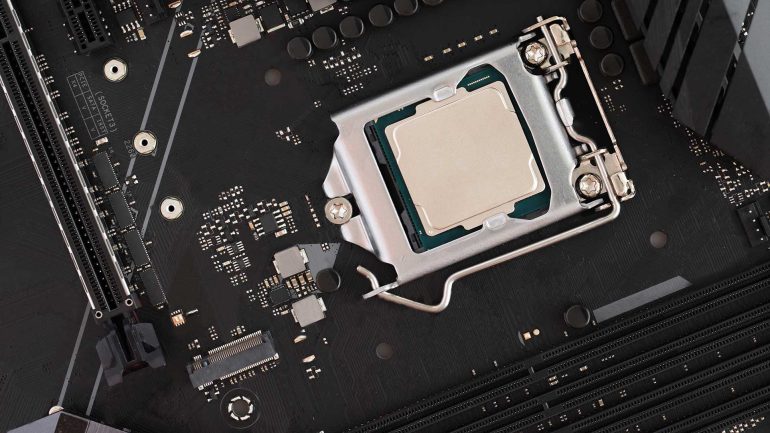 A bit of history about ATX, mATX, and Mini-ITX

Back in the 80s, IBM was the most popular manufacturer of personal computers. Their PCs supported third-party parts, so the company decided to design the first standardized motherboard form factor – the AT. AT motherboards had a standardized size (351x305mm) and connectors. The board was quite bulky for the cases of the time, leading to the creation of the Baby AT form factor. It was smaller and cheaper to produce, resulting in immense popularity.

The first ATX motherboards were made by Intel, which tried (and succeeded) to create a new standardized motherboard form factor for even easier design, manufacturing, and parts compatibility. Modern ATX boards feature the same size (305 x 244mm), but they’ve received lots of spec revisions in the meantime.

Intel also designed the Micro ATX form factor in 1997 to pack the same specs on a smaller (244 x 244mm) area. Finally, Mini-ITX boards were invented by VIA in 2001, and for years, they were niche products, but thanks to the rise of the SFF PC community in the last decade, they’re now more popular than ever.

The biggest difference between these three form factors is the physical size. ATX boards are the largest of the bunch (305 x 244mm), followed by mATX (244 x 244mm), and Mini-ITX (170 x 170mm) motherboards. As you can see, the Micro ATX form factor features the same width as the ATX, but it’s also 20 percent shorter. Mini-ITX motherboards are by far the smallest of the bunch, which was the main reason for creating the ITX form factor in the first place.

As for the case compatibility, most mid-tower and full tower cases (built for ATX motherboards) should support both mATX and Mini-ITX boards. All three form factors have standardized mounting hole placement even though they differ in size (boards, not mounting holes). That said, some ATX and mATX cases do not support Mini-ITX boards for one reason or another. So, if you think about building an ITX PC inside a mid or full tower case, do check for compatibility.

mATX boards can fit inside virtually every case that supports ATX boards. They are of the same width and have identical mounting hole placements as the ATX boards, the third row notwithstanding. So, even if a case doesn’t have standoffs for the third row of mounting holes, you will be able to screw the board and secure it inside the case.

ATX boards can fit inside mid-tower and full tower cases. A few Micro-ATX cases could offer support for ATX motherboards. So, if you want an ATX board inside an mATX case, you’re going to do lots of research because this is a highly uncommon spec.

Most Mini-ITX cases are compatible only with the Mini-ITX standard. Some models (Lian Li O11 Mini) can host mATX boards and ATX boards, but the O11 Mini is a definite outlier. Also, it’s sort of a mixed form factor, not strictly Mini-ITX. Virtually every proper Mini-ITX case is built for Mini-ITX boards only. Many SFF cases can’t even host Mini-DTX boards, which are very similar in size (170.18 x 203.2mm) to the Mini-ITX boards. Not surprising, considering that SFF PCs are usually built because of their increased portability and smaller footprint.

ATX vs micro ATX vs Mini-ITX boards – features and popularity

When it comes to features and popularity, the Micro ATX form factor is a proper middle child of the family. The form factor was more popular back in the day because the SFF PC community was still in its early stages. Mini-ITX boards were still a niche product for low-power setups, without support for the biggest and baddest CPUs and GPUs of the time.

But, during the late aughts and early twenty-tens, the Mini-ITX form factor rose in popularity, and soon after, it took over the enthusiast communities. These days, mATX boards are by far the least popular of the bunch. Mini-ITX boards are smaller but can pack almost the same power as mATX boards (aside from having four DIMM slots), and ATX boards aren’t that much larger, with many mid-tower cases being quite similar in size and volume as Micro-ATX cases. The mATX form factor does not offer enough differentiation and benefits over the ATX and Mini-ITX form factors, resulting in its current lack of popularity.

ATX is the most popular kid in the family, with Mini-ITX being the small form factor alternative. This led to Micro-ATX boards usually coming with fewer features than ATX boards, even though their size does support a ton of extra options. An average mATX board has fewer SATA ports, fewer PCIe and M.2 slots, and fewer internal USB connectors. Their audio codecs are usually budget and mid-range options, and when it comes to OC-friendly features (high-end VRM, POSTcode, Debug LEDs, etc.), they’re often omitted on Micro-ATX models.

You certainly have capable Micro-ATX boards (ASUS ROG Strix Z490-G Gaming, MSI B550M Mortar) that feature upper mid-range specs. Stuff like support for high-speed memory, dual M.2 slots and multiple PCIe slots, richly populated rear I/O, or extra features like the front USB-C connector or a Flash BIOS button. But if you’re looking for a high-end or flagship Micro-ATX model, good luck finding one. Like the AMD X570, some chipsets have just one or two models that, plainly speaking, suck.

When it comes to Mini-ITX specs and features, their size is the most significant limiting factor. This is why you don’t have a Mini-ITX board with four DIMM slots, multiple PCIe slots, more than two M.2 slots, or a state-of-the-art VRM section. But because of the constantly growing popularity among the enthusiast PC crowd, manufacturers continue to pack more and more features on Mini-ITX boards. These days, thanks to the fact that we have 32GB and 64GB RAM sticks, high-speed and high capacity SSDs (both SATA and M.2), and compact VRM designs built for flagship CPUs, you can make a proper beast of a PC based on a Mini-ITX motherboard.

Further, thanks to their increasing popularity, there are more and more Mini-ITX boards that feature high-end audio solutions, lots of USB ports on the rear I/O, massive heatsinks for cooling off VRMs and chipsets, Wi-FI 6, lots of RGB, as well as OC friendly features such as BIOS Flash or Debug LEDs. Due to the size constraints, some features, such as the POST code, tons of fan connectors, or power and reset buttons mounted on the PCB, are still omitted on this motherboard form factor.

Going the SFF route means accepting compromises. Sure, you won’t be able to pack four M.2 SSDs or have a whole array of hard drives. You won’t be able to build an SLI setup (but who would want one those days anyway?) to overclock the hell out of CPUs such as the i9-10900K or the upcoming 11900K or to have a ton of add-on cards. But that setup will look better than any regular-sized PC.

The ATX standard is still by far the most popular in the motherboard world, and you can find a flagship motherboard that packs every single feature out there if you have the cash, of course. Further, ATX boards fill every price bracket. From dirt cheap budget boards to flagship monsters that now sport four-digit price points. They also come with the widest spec gaps. You can get an ATX board with barebone specs, good enough for a basic PC for browsing the web, with worse specs than any mATX or Mini-ITX board.

Finally, when it comes to power connectors, an overwhelming majority of ATX, mATX, and Mini-ITX boards have the same or very similar power connectors compatible with every modern ATX and SFX power supply. The latest PSU revision includes a new connector for the motherboard, replacing the current 24-pin standard. But the ATX12VO standard is, at the moment, limited to custom PC builders and OEMs. It will take years before it arrives in the mainstream market. At the moment, your PSU will be able to power all three motherboard form factors. Just make sure it’s powerful enough for your next build.

ATX vs mATX vs mini-ITX – which one to buy?

Last but not least, let’s talk about which motherboard form factor is right for you. ATX boards are the best for most users since most of us already have mid-tower or full tower cases that can house these. Next, the mid-tower is the most popular case form factor, with a massive selection of different models. You can buy a case built for silence. Or, you can pick the airflow route and get a mesh case that isn’t as silent but has a much better thermal performance. You can also get crazy with RGB or go for a showoff build featuring lots of customization.

Next, if you like custom water loops, an ATX board combined with an ATX case is the way to go. Custom loops usually include many different parts, so you want a larger case that can fit the whole contraption. But even if you’re on a budget, ATX motherboards are the answer unless you find a similarly priced Micro-ATX alternative. ATX boards are also the best choice for gamers, professionals, and PC enthusiasts in general. They come, on average, with the highest number of expansion slots, storage ports, USB ports on the rear I/O. ATX boards also have the best VRM sections. To summarize, the ATX form factor is a great choice no matter your background, budget, and knowledge about PC building.

Micro ATX boards are the best choice for budget buyers since their smaller size means manufacturers can fit an extra M.2 slot, Wi-Fi 6 support, or a couple of other additional features without increasing the price of the board. For instance, the MSI B550M Bazooka is an affordable mATX board with two M.2 slots, two PCIe x1 slots, and even a flash BIOS button. At the same time, it is less than $10 more expensive than the most affordable B550 ATX board, the ASRock B550 Phantom Gaming 4.

Of course, an mATX board is also the only choice if you already own a Micro-ATX case and don’t want to buy a new one. Gamers who want the best performance and PC enthusiasts, in general, should avoid this form factor because you don’t have high-end and flagship Micro-ATX boards anymore.

Last but not least, we have the Mini-ITX form factor, which is the best choice if you want to build a small HTPC or a compact, console-like gaming rig. Next, thanks to the increased popularity of SFF PCs, we finally have relatively affordable ITX cases that come with outstanding thermal performance, slick design, and support for high-end GPUs that take more than two slots. Just look at the NR200 from Cooler Master.

Next, Mini-ITX boards are great for people who need a powerful PC with a small footprint. Or for those who want to build a portable PC they can carry around in a backpack. When it comes to portability and little volume, you can’t beat the Mini-ITX form factor. These boards are also great for building a home server or a NAS. That said, the ATX form factor is still an excellent choice for this purpose. You can find tons of dirt-cheap ATX boards based on older chipsets and couple them with equally cheap and old (but still capable) CPUs.

Finally, if you’re a PC enthusiast or just a fan of SFF PCs, get a Mini-ITX board. These are great for people who think that building regular PCs has become too simple. Creating a functional ITX build with solid thermal performance powered by something like the Ryzen 9 5900X and the RTX 3080 is an art in itself, especially if you own a compact case such as the NCase M1. Finally, if you want the ultimate custom loop building challenge, the Mini-ITX form factor is the way to go.