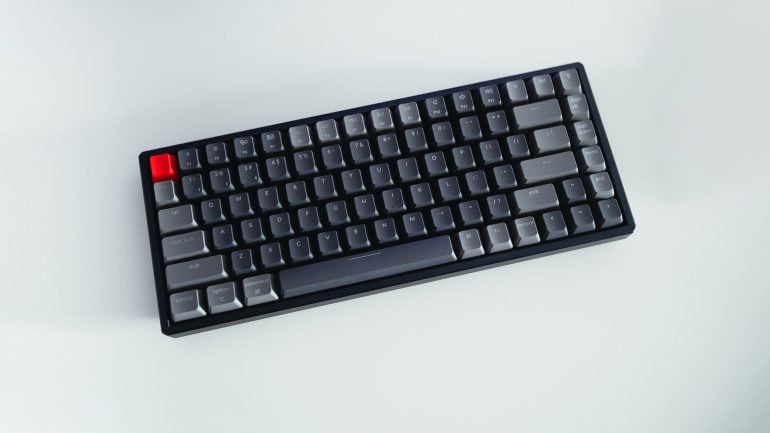 Mechanical keyboards come in all shapes and sizes. Aside from the ultra-portable 60% models along with the version with arrow keys in the form of 65% keyboards, you can also get so-called 75% keyboards. There’s a fair share of awesome custom 75% keyboards, but we won’t deal with these today.

Our list includes the best 75% keyboards that you can find at large online retailers. Models featured here are available to everyone. You don’t need an invite, a group order, or in-depth knowledge about mechanical keyboards to find and buy 75% keyboards featured in our best 75% keyboards list. Before we share the first entry, let’s explain the 75% form factor. In short, 75% keyboards are 65% keyboards with the added function row. While some models include almost every key found above arrow keys, most models include the following keys: Page Up, Page Down, Home, End, and Delete. These keys are tightly packed along with the arrow keys to retain the portable design. This is quite different from TKL keyboards, which are much larger even though they have only a couple of extra keys compared to 75% keyboards.

Before we start, we would like to share a couple of buying guides you might find interesting. For starters, check out our list of the best IPS monitors. If you’re in the market for a new gaming PC, you should read our guide for the best motherboard CPU combos. Finally, you can visit our Vissles LP85 review if you’re looking for an ultra-thin 75% mechanical keyboard. 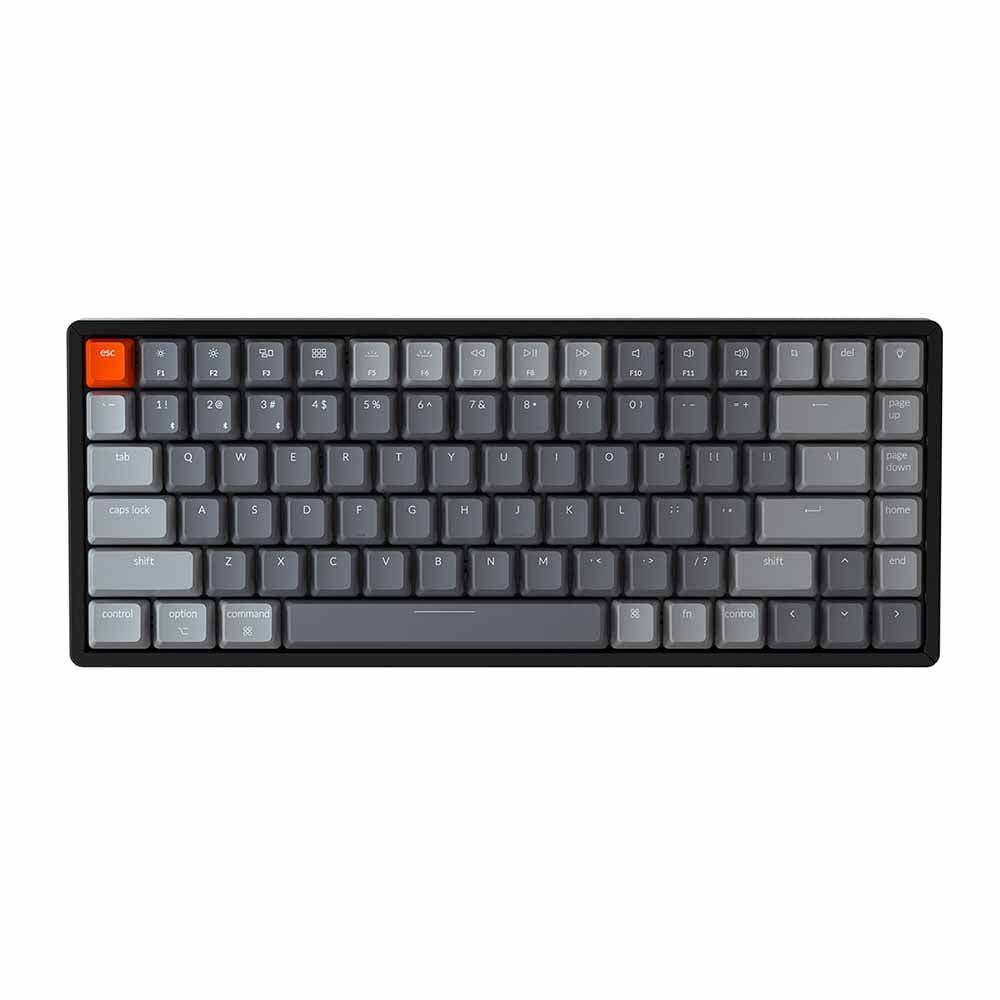 The K2 from Keychron is our pick for the best wireless 75% keyboard. It features amazing build quality with a metal frame and zero flex. The keycaps are a bit wobbly on the other hand, along with a bit of a hollow feeling when typing, which can be remedied by placing a silicon dampener on the bottom of the housing.

The design is excellent, with thin borders and pleasing color combinations. The keyboard should be great both for Windows and Mac users since it comes with two sets of keycaps for Mac OS-specific keys. Do note that the PBT keycaps version of the keyboard is selling separately. The regular version comes with lower-quality keycaps. These feel nice but aren’t as robust as the PBT keycaps.

The wireless performance is excellent 99 percent of the time. Using the Bluetooth connection will induce occasional moments of lag, but in the amount that shouldn’t be worrying. The RGB version of the keyboard has pretty dim lighting.

This also stands for the single-color backlighting version. Regarding battery life, you can expect about seven days of usage before recharging. Finally, the keyboard is available in various Gateron switches, which feel pretty good but not as good as their Cherry MX counterparts. 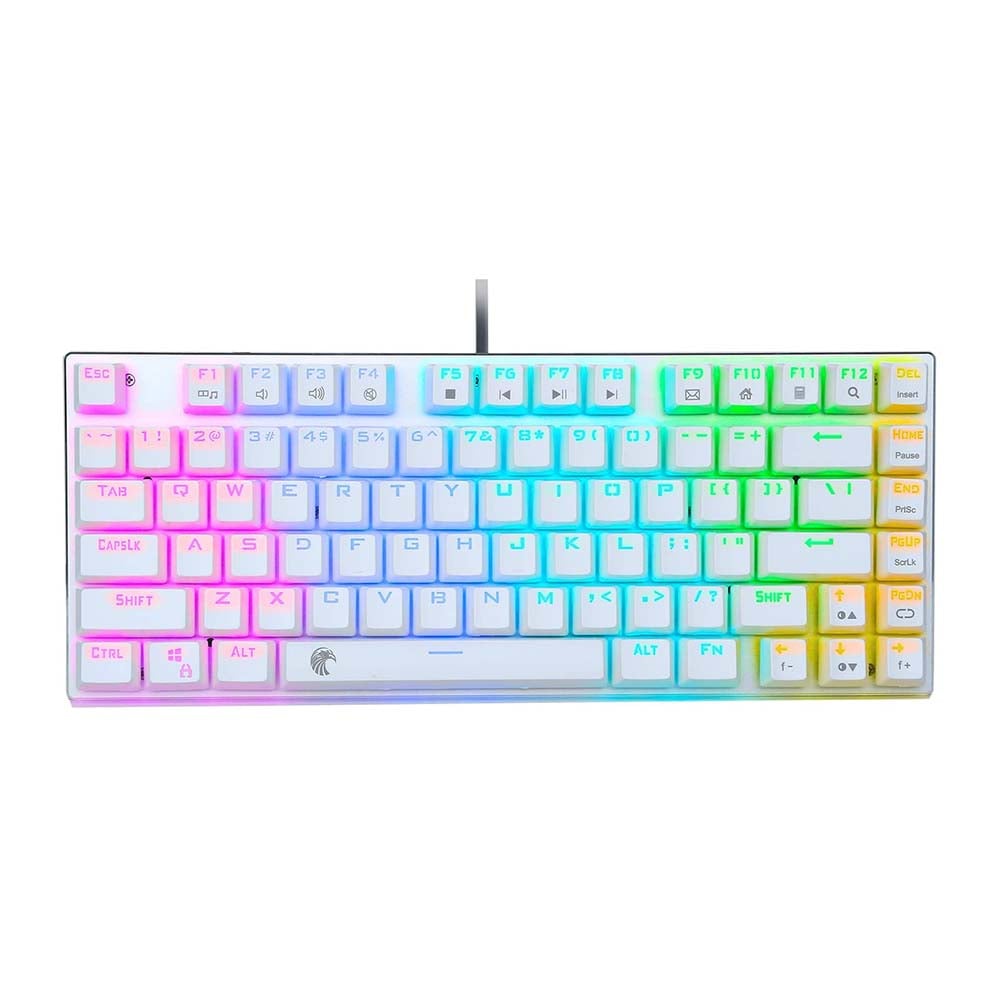 The build quality here is pretty good. The base plate combines plastic and metal and is as firm as on much more expensive keyboards. Overall, this is a great deal and a perfect entry ticked to the world of mechanical keyboards. 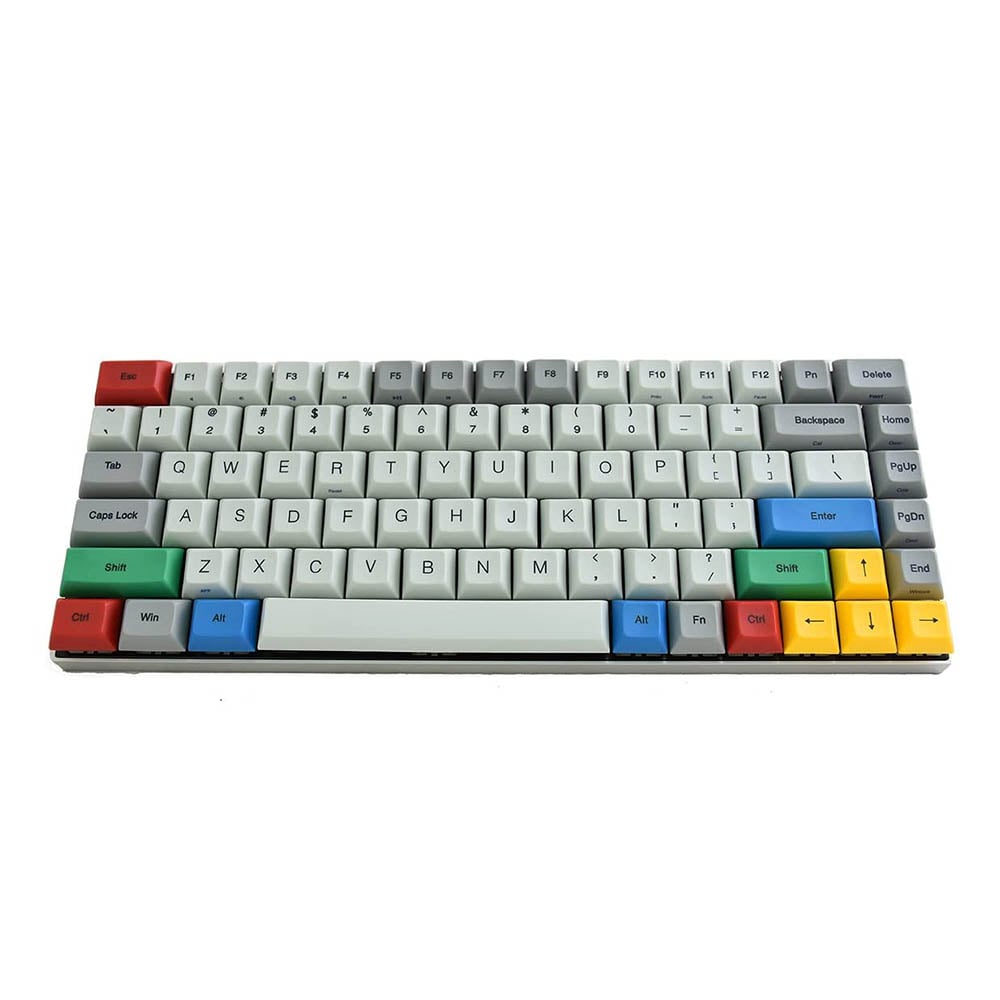 For users looking for slick design and unique looks, we present the Vortexgear Race 3, our pick for the best-looking 75% keyboard. We like its multi-colored design that combines variously colored keycaps into an attractive layout. The keyboard’s build quality is top-notch. Everything stays firm and without flex, even if you put all your strength into trying to break the keyboard.

PBT keycaps feel great, and the typing experience is very pleasant. Performance is great since we’re talking about Cherry MX blue switches here. The only negative is that they can be pretty loud, especially at night. Also, the keyboard doesn’t offer any backlighting, which is a definite minus for such an expensive keyboard. 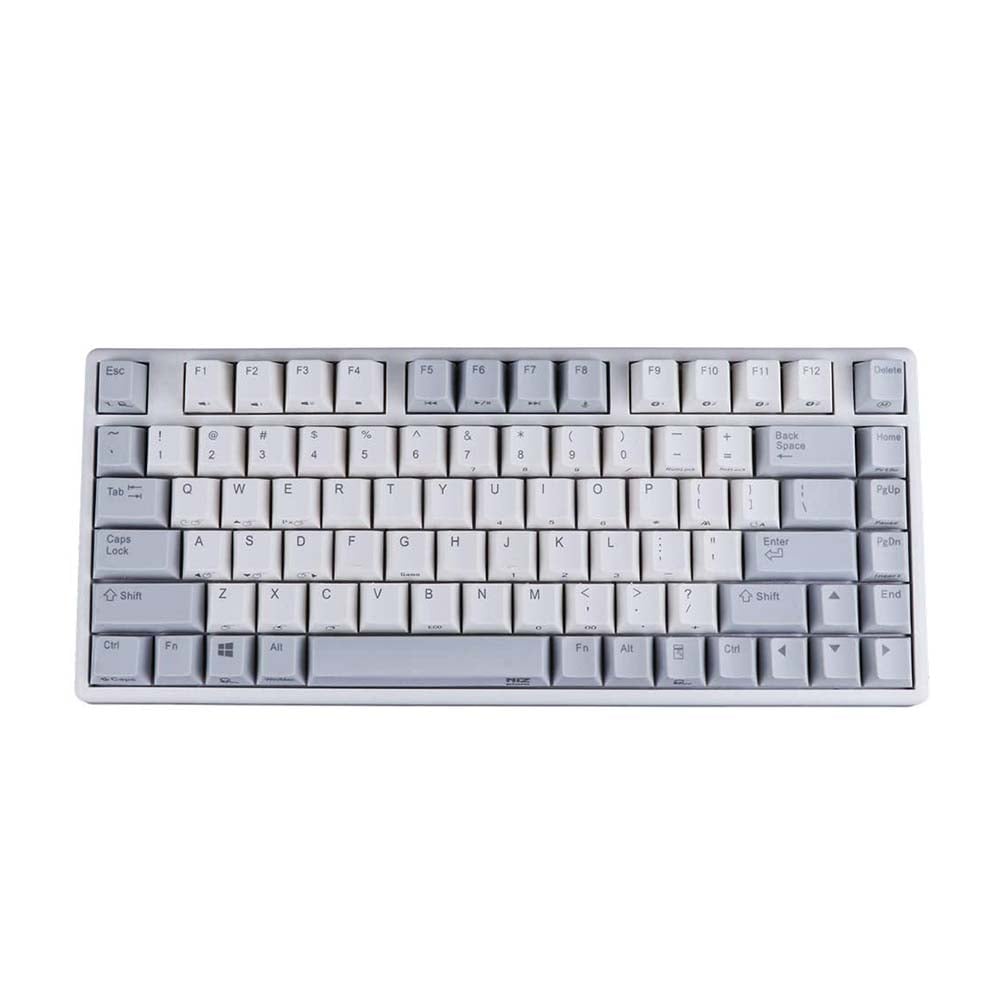 Two Epomaker keyboards ended as top picks in our list of best Topre keyboards, and today, we have the Epomaker NiZ Plum 84 Pro. This is the best 75% keyboard with Topre-like capacitive switches.

These switches feel great when typing on them and are almost indistinguishable from original Topre switches. The design is pretty attractive. You have slim borders, blue and white keycaps made out of PBT plastic, and superb build quality.

The keyboard doesn’t offer any form of backlighting. Further, the switches’ actuation force is 35g, making them extremely easy to press. This should lead to less finger strain making this keyboard an excellent choice for typists who are hunched over their keyboard each day for hours on end.

Overall, this is an excellent 75% keyboard with electro-capacitive switches, and it’s way cheaper than models with original Topre switches. Another nice thing about this keyboard is that, like many other models on this list, it uses regular Cherry MX keycaps stems. This means you can equip it with any aftermarket keycaps that feature Cherry MX stems.

Those looking for a 75% keyboard for their Mac computer could check out the Keychron K2. It’s a pretty good keyboard with wireless connectivity. But we think that the Matias FK303 Mini Tactile Pro is a better choice. This one uses switches made by Mathias, based on the legendary ALPS mechanical switches that are no longer in production.

The switches in this keyboard are based on the ALPS clicky switches used on the legendary Apple Extended Keyboard. Overall, the typing feel is very similar to ALPS switches. It’s enjoyable, and thanks to the actuation force of about 60g, these switches should be a great choice for long typing sessions. They are both tactile and clicky, like the Cherry MX Blue switches.

The keyboard features a sturdy frame that won’t easily flex. The design is reminiscent of the classic typewriter design, with an angled frame and that thick border on the top. The border isn’t just a fashion detail; it hosts two USB 2.0 ports, which can be handy to have for some users.

The typing experience on this keyboard is pretty good. The keycaps aren’t made of PBT plastic, but they feel nice under the fingers. It’s worth mentioning that the keyboard doesn’t come with replacement keycaps for Windows-specific controls. In other words. this keyboard’s for Mac users only. 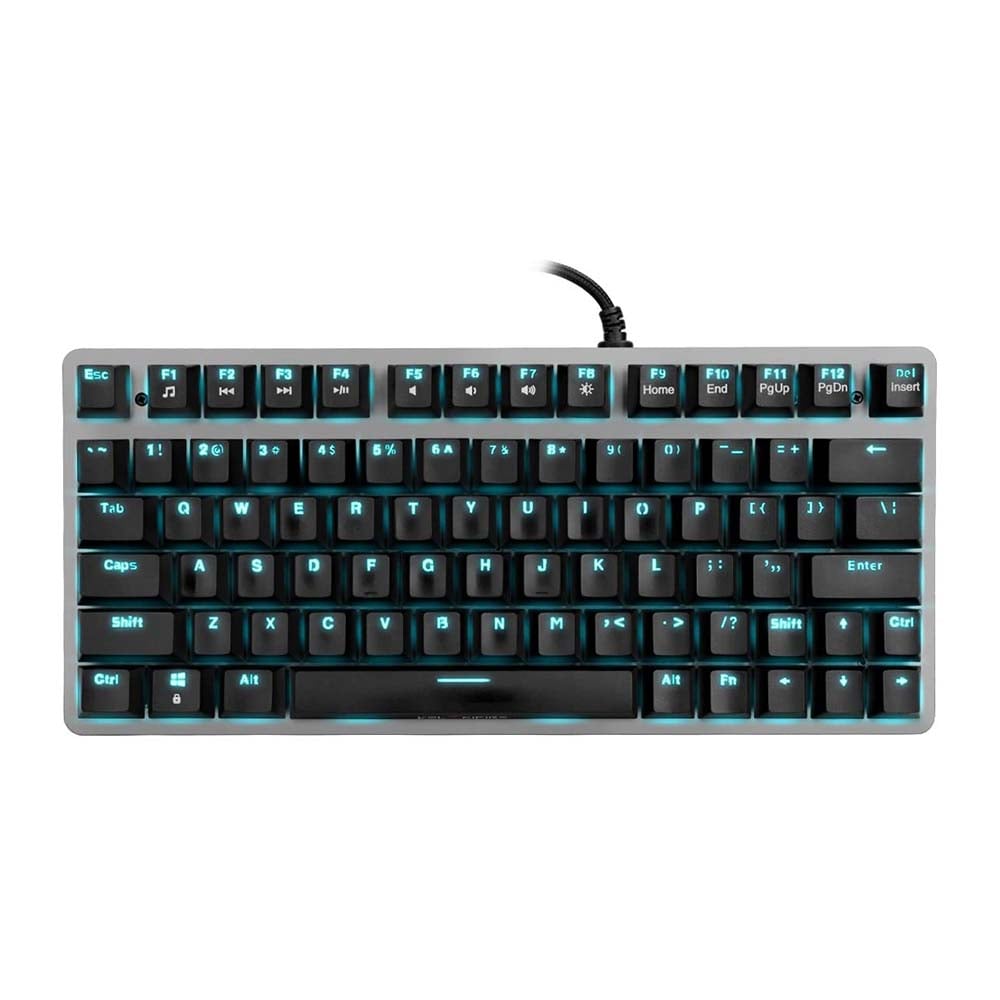 Next is the cheapest 75% mechanical keyboard you can find. It’s about 25-30 percent cheaper than our budget pick, and for the money, you get a lot.

First of all, this keyboard features brown mechanical switches (Outemu or Kailh) that are pretty comfortable to use and are great both for gaming and typing. Next, the build quality isn’t great, but for the price, it’s sturdy enough.

You also shouldn’t expect PBT keycaps on this keyboard. The ones used are okay. They are pleasant when typed on but don’t expect them to last nearly as long as PBT keycaps. On the flip side, you can replace them with aftermarket keycaps since the keycaps used feature regular Cherry MX stems.

The keyboard comes with blue backlighting, which is a huge plus at this price point. Sadly, its cable isn’t detachable, which is a feature we’ve found on virtually every other keyboard on this list.

Despite its lower portability than other budget models, the Velocifire TKL78 Wired MK is a nice budget 75% mechanical keyboard. The typing experience is solid, and the keyboard is dirt cheap, so we can wholeheartedly recommend this one for users who are just entering the world of mechanical keyboards. 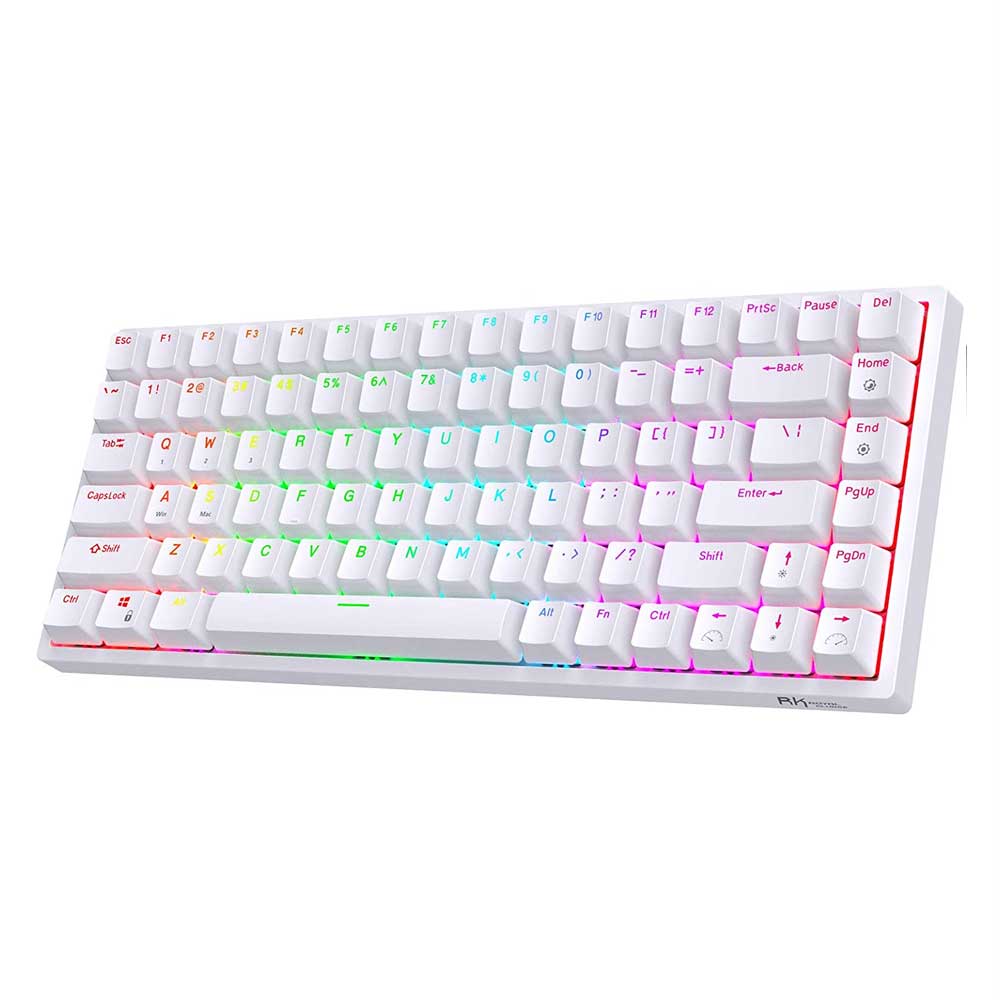 We award the title of the best hot-swappable 75% keyboard to the Royal Kludge RK84. It sports a competitive price, and it comes with a slew of extra features not found on competitor products, like the Keychron K2 Hot Swappable.

The body’s made of plastic, but it’s a quality plastic that flexes a bit when you really try to bend the keyboard. Otherwise, the plastic body does feel great under the fingers. Next, we have both Bluetooth and 2.4GHz wireless connections, which is awesome to find on a hot-swap wireless keyboard.

Bluetooth is universally accepted, but it’s a bit spotty and can induce lag or fail to register keypresses. With the 2.4GHz connection, you can finally play games without worrying about stuttery keyboard response and occasional lag spikes that happen when using Bluetooth.

That said, if you travel a lot or like to switch between different devices, the keyboard’s Bluetooth support includes pairing with up to three devices at the same time, which is great. Do note that earlier versions of the keyboard suffered from poor wireless performance. We would avoid looking for this keyboard on the used market.

When it comes to the switches, they are made by RK and aren’t the best on the market. If you get this keyboard, make sure to swap them for your favorites. Stabs, on the other hand, are pretty good for the price and above those seen on the Keychron K2 Hot Swap. The RGB backlighting is decent, but nothing special, with north-facing LEDs. As for the PCB, it can work both with 3-pin and 5-pin switches.

The keyboard doesn’t come with adjustable feet. Instead, it uses detachable magnetic feet that look cool but aren’t that great. Next, the cable is detachable, and you can remove the outer frame to get that floating look that looks very slick with the RGB turned on. You also get two USB-A ports to use via passthrough (only in wired mode). Finally, the included 3750mAh battery should be enough for about ten days of usage.

Downsides include the aforementioned switches, cheap-looking keycaps, and the flexy plastic frame. Overall, the RK84 is an amazing hot-swap 75% keyboard that’s definitely worth its price.