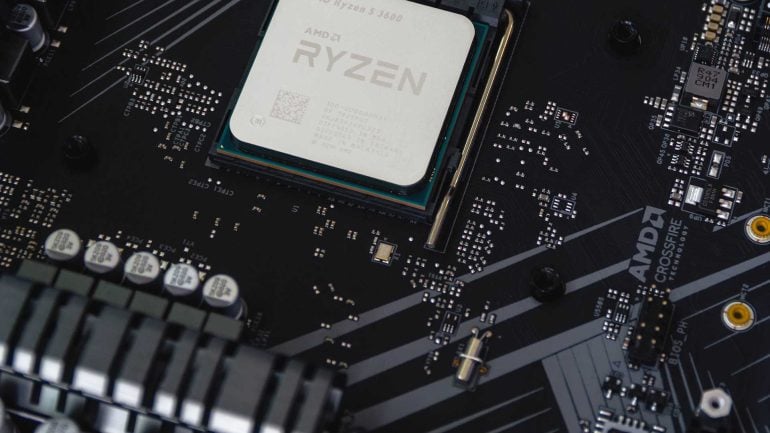 These X570 boards are affordable and offer great value for their price.

The X570 chipset is the current flagship Ryzen chipset. It can be found on a truckload of different models, from boards that are cheaper than most B550 models to flagship boards that cost an arm and a leg. If you’re interested in other motherboard chipsets, visit our motherboards section. It includes model lists for most of the currently popular chipsets.

Today we are covering the five best budget X570 motherboards. Now, remember that these are the best budget boards, not the cheapest boards around. Well, all of them except our first pick. They do have a competitive price, are good enough for any 3rd gen Ryzen CPU, be it the Ryzen 9 3900X, 3950X, or the 5950X, and they come with a wide set of features that should be enough for most users.

The list features four ATX boards along with one mATX and one M-ITX choice. Four boards should be fine when used for overclocking, all except the cheapest ATX and the mATX choice. Before we delve into the list, we would like to recommend reading our guide for the best X570 motherboards. This guide includes the higher-priced models. Next, we also have a list of the best B550 motherboards for users looking for cheaper alternatives. Finally, here’s our X570 motherboard list for you to check out every X570 model currently on the market. 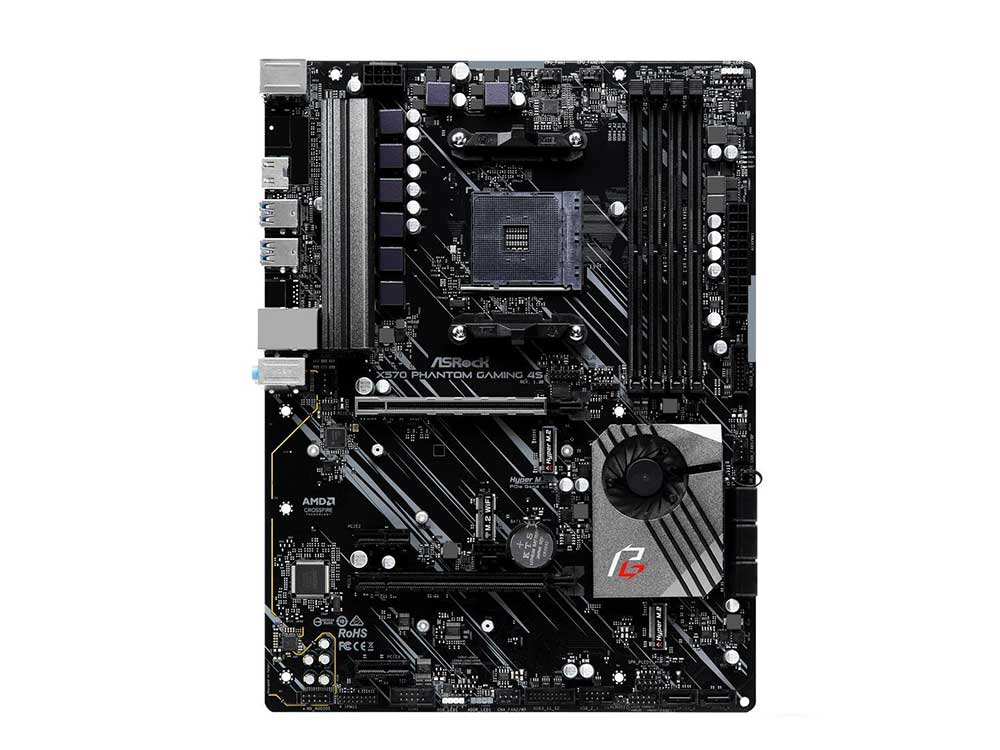 Memory support goes up to DDR4 4600 Mt/s, and the board comes with eight SATA III ports instead of six, found on most other X570 boards. The Phantom Gaming 4S includes two PCIe 4.0 x16 slots as well as two PCIe x1 slots. While there’s no Wi-Fi support out of the box, the board does feature one Key E M.2 socket made to accommodate Wi-Fi cards.

The connection options include gigabit LAN and, surprisingly, the audio section is powered by the Realtek ALC 1200 codec, found on more expensive boards. Finally, the rear I/O features six USB 3.2 gen1 ports without a single USB 3.2 gen2 (10Gbps) port. On the flip side, the board can be equipped with ASRock’s Thunderbolt 3 card, bringing two super-fast Thunderbolt 3 (USB-C) ports if you need them.

As for the extra features, you can find debug LEDs on the PCB, which is nice to see on a board as cheap as this one. That said, you’ll probably need a Ryzen 3000 CPU or older in case you want to pair the X570 Phantom Gaming 4S with a Ryzen 5000 CPU since you’ll need to flash a BIOS update and the board doesn’t feature the flash BIOS button.

The ASUS TUF Gaming X570-Plus shares the best budget X570 board title with the Gigabyte X570 AORUS Elite. They both come with a nice set of features, excellent VRMs, and they both have Wi-Fi variants if you need wireless connectivity.

The TUF Gaming X570-Plus has a VRM good enough for any Ryzen CPU and is pretty good for overclocking said CPUs. You also get support for up to 128GB of DDR4 4400 memory and eight SATA III ports. Storage ports also include two PCIe 4.0 M.2 slots for NVMe SSDs. There are two PCIe 4.0 X16 slots, out of which one works at x16 speed while the other one runs in x8 mode. The board also has room for three PCIe 4.0 x1 slots.

The back panel hides one DisplayPort and one HDMI port for users with iGPUs, along with a selection of seven USB 3.2 ports. Realtek ALC S1200A -powered audio section is pretty good, providing clear sound and coming with support for 7.1 channel surround sound. There’s also gigabit LAN powered by Realtek.

As for the design, we like it. The combination of colors is attractive without being too flashy or over the top, while the heatsinks and cooler for the chipset give the board a bit of personality with their dark grey color combined with yellow details. Overall, the TUF Gaming X570-Plus is an impressive X570 board that rocks a very competitive price. You can use it in combination with any CPU, and you’ve got a wide assortment of features for the price. 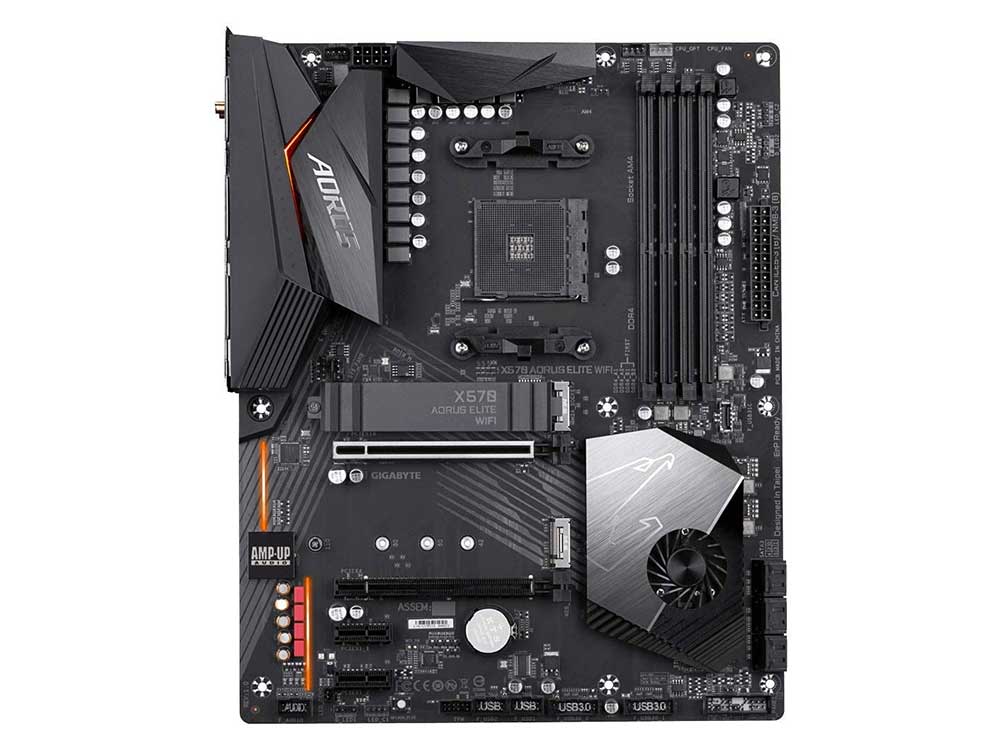 Another killer X570 board for the price. The Gigabyte X570 Aorus Elite is bringing a very similar set of features to the TUF Gaming X570-Plus and is selling for a very similar price. Here you get support for up to 128GB of DDR4 4000 MT/s memory instead of 4400 and two fewer SATA III ports. Six instead of eight. Finally, this board has BIOS flashback but no debug LEDs, the exact opposite of ASUS’s board.

The spec list continues with 12 phase VRM that’s good enough for overclocking any 3rd gen Ryzen CPU and two PCIe 4.0 M.2 slots, out of which one is armored. There are two PCIe 4.0 x16 ports, and the situation is the same is on the ASUS board. One of those works at full, x16 speed while the other runs at x8 speed.

There are also two PCIe 4.0 x1 slots. The back panel includes four USB 2.0, four USB 3.2 Gen 1, and two USB 3.2 Gen 2 ports. You don’t get a USB-C Port here. Also, there’s only one HDMI port, which won’t cut it for iGPU users who want to use more than one monitor. If you get this board, you’ll need a separate GPU for a multi-monitor setup. Luckily, we have a list of the best video cards for every multi-monitor setup.

The Realtek ALC1200 audio codec powers the audio section. It supports a full 7.1 channel surround sound. Gigabit LAN is powered by Intel, which is the preferred option over Realtek (found on the TUF Gaming X570-Plus) for a large number of users. The Wi-Fi version of the board comes with Intel Wi-Fi 5 chip and Bluetooth 4.2 connectivity.

Design-wise, we like the X570 AORUS Elite. Its visual design is subdued, similar to the TUF Gaming X570-Plus, with a similarly unobtrusive design. Dark grey PCB, a few while details, and a few orange LEDs are there to give the board a bit of dynamic without adding too many details. 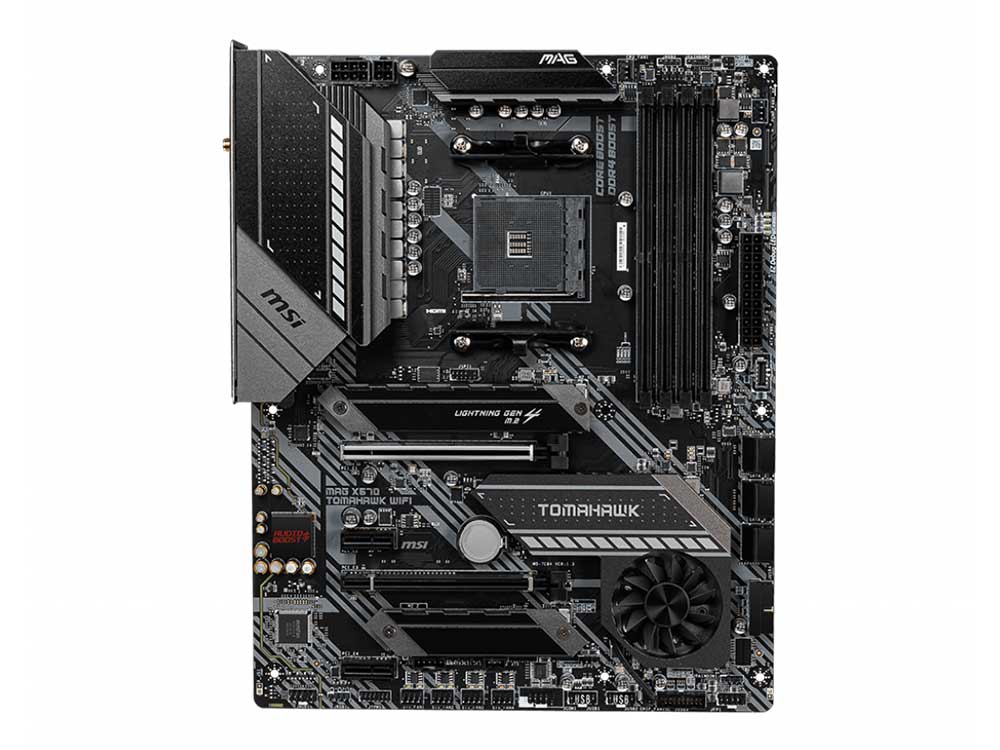 The MSI MAG X570 Tomahawk WiFi is another amazing budget X570 board that sells for about the same price as the X570 AORUS Elite and the TUF Gaming X570-Plus. This one’s a bit better, at least for people who like to push their CPUs to their maximum. Great VRM in combination with both BIOS flashback and debug LEDs is a perfect combination of features for an OC-friendly motherboard. Overall, the MSI X570 Tomahawk definitely is the best budget X570 board for overclocking.

Aside from a set of OC-friendly features, this board comes with a couple of upgrades over the two other ATX boards on our list. Features that should interest users who aren’t into overclocking. These are the 2.5 gigabit LAN (over the gigabit LAN offered on the other two ATX boards) and support for the new Wi-Fi 6 standard. You also get Bluetooth 5.0 connectivity.

The design of the board is all black with large heatsinks and without unnecessary details. Simple and effective and better looking than both the X570 AORUS Elite and TUF Gaming X570-Plus. MSI’s answer to their X570 boards overheating issues is nothing short of impressive. The company crammed the board with insane specs for the price, making this board the best budget X570 board at the moment.

If you want to get a Micro-ATX X570 board, you don’t have many choices. There are two boards in total with the one from Biostar being pretty bad. So, you’re left with the ASRock X570M Pro4. The VRM’s not great but not terrible either.

The rear panel includes one HDMI and one DisplayPort video outs along with six USB 3.2 Gen 1, one USB 3.2 Gen 2, and one USB-C 3.2 Gen 2 port. The Realtek ALC1200 audio codec is powering the audio section. Finally, the design is pretty good. We like this board, it’s black and white PCB combo and silver heatsinks. Especially that giant VRM heatsink.

Those who want to build an SFF build inside a Mini-ITX case are in luck since the Gigabyte X570 I Aorus Pro WiFi is the best budget X570 board available in the M-ITX form factor. The 6-phase VRM isn’t the best in class, but it’s fine when under load. It’s running pretty good when combined with the Ryzen 7 3700X and should be good enough for any CPU, even the 3950X, with adequate airflow.

As for the specs, the board can support up to 64GB of DDR4 4400 MT/s memory, and you can install two NVMe drives thanks to the second M.2 slot installed on the back of the board. Only one PCIe 4.0 x16 slot is normal on a Mini-ITX board. You also get one M.2 slot dedicated for a Wi-Fi card along with four SATA III connectors. Intel chip powers the gigabit LAN. The board also supports Wi-Fi 6 and Bluetooth 5.0, which is great news.

The Realtek ALC1220-VB codec with support for up to 7.1 channel audio is responsible for the audio section. On the back panel, you can find one DisplayPort and two HDMI ports. If you run a multimonitor setup from an APU, this is the Mini-ITX board to get. The back panel also hosts four USB 3.2 Gen 1, one USB 3.2 Gen 2, and one USB-C 3.2 Gen 2 port.

Finally, the design features the signature Aorus details. Dark grey PCB, silver and black heatsinks, and no unnecessary details. In other words, the board looks pretty good. Overall, the X570 I AORUS Pro WiFi is an impressive X570 Mini-ITX board. It can host any Ryzen CPU without issues and comes with a nice set of features. You also get Wi-Fi 6 and two M.2 slots on an M-ITX budget board, which isn’t seen every day.

While PCIe 4.0 SSDs are pretty fast, they are also pretty expensive, and most users probably won’t need more than one. And when it comes to multiple PCIe 4.0 x16 slots, well, SLI and Crossfire are dead, so you don’t need that feature.

So, pick a budget X570 board if you plan on running more than one PCIe 4.0 SSD. Otherwise, mid-range B550 boards, which sell for about the same price, are a better choice.