Smash your opponents with the latest meta builds! 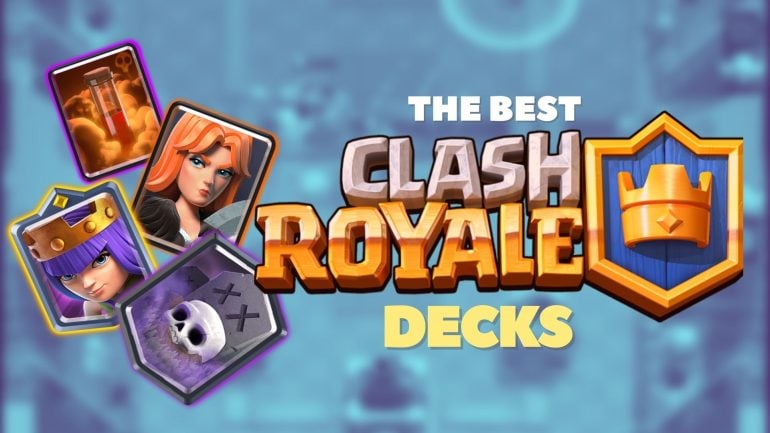 Clash Royale is the deck-building strategy smash hit set in the Clash of Clans universe. Don’t let its relatively small deck sizes fool you, Clash Royale boasts a depth and nuance that rivals some of the greatest strategy games out there. It features hundreds of cards to pick from and its developers provide a steady stream of updates and patches to keep gameplay fresh. So, if you’re a fan of card games, Clash Royale should be right up your alley.

Every Clash Royale patch introduces a new meta, so builds fall in and out of favor all the time. That means players always have to be ready to switch up their decks to stay competitive. Of course, we know not everyone has the time or energy to read through patch notes and min-max builds for ultimate efficiency. If you find yourself struggling to stay afloat in the latest meta, we’ve put together this list of some of the best Clash Royale decks right now. Check them out below.

Mastery is all about growth. Step up your game with these Warframe promo codes and World of Warships codes.

The Archer Queen Splashyard deck is excellent for defending and luring enemies into making hasty moves. The low-cost Troops ensure a steady flow of Elixir, and the Spell Cards are meant to buy you time to unleash your Archer Queen, who deals devastating damage to your opponent’s towers.

The biggest drawback to this deck is its lack of true damage-dealing units. Its heavy reliance on the Archer Queen also means you’ll have to play defensively during Single Elixir. Use your Spells to fend off enemy units until Double Elixir rolls around.

The Giant Graveyard is a deck that has been popular for almost a year now. It offers excellent defense without sacrificing damage potential, making it a great choice if you want a straightforward build that’s easy to execute.

Your Giant will be doing the brunt of the structural damage, so you want him at the front to ensure he reaches the enemy’s tower. If the enemy responds with anti-Giant units, like Goblins or a Princess, use your Arrows to take them out of the fight. Drop Musketeers behind the Giant to provide supporting fire, and deploy your Dark Prince to protect the back lines.

As the deck name suggests, you want to use the Megaknight to wreak havoc among the enemy lines. Place him on top of enemy offensive units and counter push with supporting units. Don’t waste your spells, you want the Snowball at hand in case the enemy drops Bats on him.

Play it safe during Single Elixir, using the Megaknight only when enemy forces are clumped up (usually around chokepoints, like bridges). In the early stages of a round, you probably won’t have enough Elixir to provide him the support he needs to reliably push forward. Bide your time until Double Elixir, then apply pressure with the Megaknight and support units.

This is a all-out offensive deck designed to end a match as quickly as possible. The idea is to apply constant pressure on your opponent by deploying a constant stream of Barbarians and Royal Recruit near bridges. With so many units coming at them, your opponent be forced to spend their Elixir on defense. If your opponent attempts to boost their Elixir production with an Elixir Collector, use your Fireball to take it out.

You want to overwhelm your opponent at the start of the round and never let up. Once Double Elixir kicks in, they will have the resources to actually mount an attack, and that could be bad news for such a low-cost, high-volume build as the Mother Witch Hogs Fireball.

This is an aggressive deck that requires active engagement from the player. You’ll need considerable Clash Royale knowledge and the ability to adjust your play on-the-fly.

With a Mortar Miner Bait deck, the goal is to lure your opponent into spending resources to counter your Mortar. The Mortar deals insane amounts of damage to the tower, and they’ll have no choice but to take it out or risk a quick loss. Once their best cards are out, use your Rascals and Barbarian Barrel to defend your Mortar. Rascals are a great defensive option because of their potential to turn a defensive action into a counterattack. Clever use of Miners is also key, as they are enough of a threat to draw attention away from your Mortar.

The LavaLoon Skeleton Dragons might just be the best overall deck on this list. Not only do the cards in this deck hit hard, they also do well at fending off all sorts of attacks. The icing on the cake? None of these cards are insanely expensive or rare, so if you’re a free-to-play gamer, you still have a good chance of putting this deck together.

There’s almost no wrong way to play this deck. As usual, you want to spend the first few minutes of a match feeling out your opponent’s cards. Once you know what to expect going forward, you can start using the Troops and Spells to best effect. You can even make a few mistakes without being punished, thanks to the flexibility of Fireball and Zap. Once you’ve deployed Balloons, it’s game over for the other guy.

The P.E.K.K.A. Ghost Bridge Spam deck is great if you can actually get your hands on all the cards—we know the Electro Wizard and Royal Ghost might take some effort to get. The P.E.K.K.A. Ghost deck is all about conserving Elixir until you have enough to deploy the high-damage units that are your win condition.

Start off with Bandits, Archers, and P.E.K.K.A. until you have enough Elixir to deploy Royal Ghosts and Electro Wizard. The Battle Ram is the cherry on top. The brutal trio of Ghosts, E. Wizard, and Battle Ram is enough to absolutely level any opponent, though you’ll need some patience to get there.

This deck is fun and simple, but it’s absurdly expensive. Don’t try building this deck unless you’ve got money to spare, because these cards are ridiculously rare.

For new players, it can be hard to get into deck building. It takes time (and a bit of money, too, if we’re honest) to build up your card collection. Just remember, it’s not always about winning or losing. A lot of the fun of Clash Royale is in trying to figure out viable builds from the cards at your disposal. One fun exercise you can try is to pick a favorite card and build a deck around it.