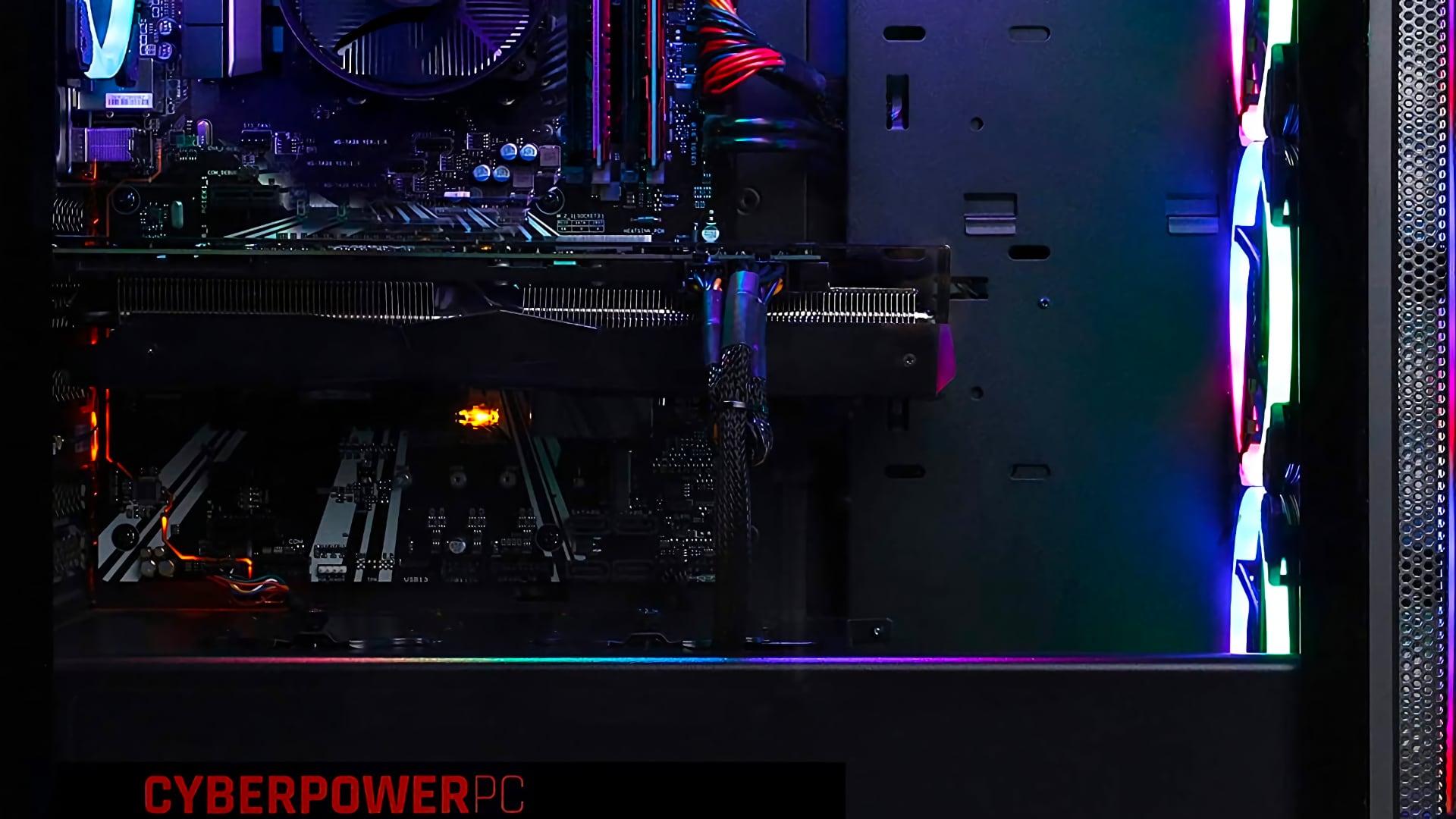 CyberPowerPC is a custom gaming PC manufacturer that specializes in assembling prebuilt PCs.

CyberPowerPC is one of the largest custom gaming PC manufacturers in North America. The company specializes in assembling and selling prebuilt PCs, from basic gaming machines to behemoths made for 4K and VR gaming. Unlike companies such as Dell or HP, CyberPowerPC uses off-the-shelf components allowing users to replace components or upgrade their PCs easily.

If you want to find the best CyberPowerPC Gaming PCs, read on. Below you’ll find five picks, ranging from budget gaming PCs to expensive machines powered by high-end GPUs & CPUs. Do note that, like most other custom PC builders, CyberPowerPC cares more about looks than airflow. In other words, the company primarily uses flashy, RGB-heavy cases instead of well-ventilated housings. 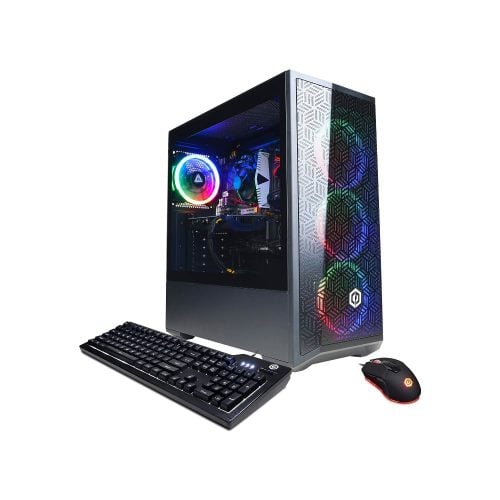 Let’s start with the budget option that almost doesn’t look like a budget gaming PC. This CyberPowerPC configuration revolves around a Core i5-11400F CPU and an RTX 2060 GPU, and if it weren’t for only 8GB of memory, we’d call this a mid-range gaming configuration. Performance-wise, the CPU & GPU combo can deliver around 60 frames per second at 1080p with high details in pretty much any current AAA title.

With that said, 8GB of single-channel memory will negatively affect performance. We recommend adding another 8GB stick of RAM as soon as you get this PC because the rest of the specs beg for 16GB of dual-channel memory in order to deliver their maximum. You’ve also got a 500GB SSD which isn’t perfect but is what you should expect to get at this price point.

The PC comes in what looks like a well-ventilated case, which is definitely an outlier for CyberPowerPC. Overall, if it came with 16GB of memory, this would be one of the best budget prebuilt gaming PCs on the market. But even with a single 8GB RAM stick, this is the best budget gaming PC made by CyberPowerPC. 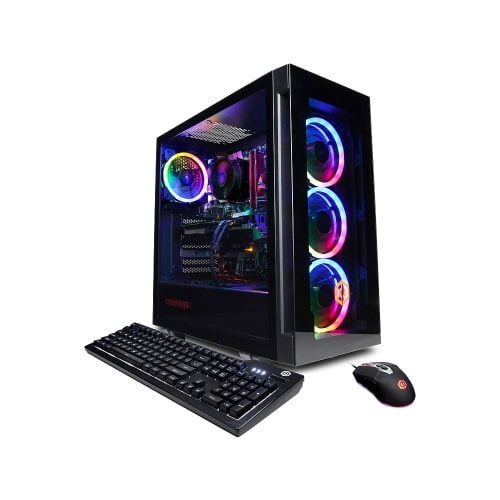 If you want the best possible 1080p gaming experience but don’t want to go overboard with the GPU, check out this machine. This Gamer Xtreme configuration packs enough oomph for high-refresh-rate 1080p gaming while also being powerful enough for 1440p gaming with medium to high details.

Overall, you should expect more than 60 frames per second in the most demanding titles such as Dying Light 2 or Cyberpunk 2077 with ultra details, and triple-digit frame rate performance in less demanding single-player games and esports titles.

Regarding memory and storage, you’ve got 16GB of dual channel memory, a 500GB SSD, and a 1TB hard drive. Overall, pretty solid for the price. A 500GB SSD won’t be able to hold all your games, but that 1TB hard drive is perfect for storing games you don’t play that often. Also, monitor CPU thermals because that CPU cooler doesn’t look like the best choice for handling the 11600KF. 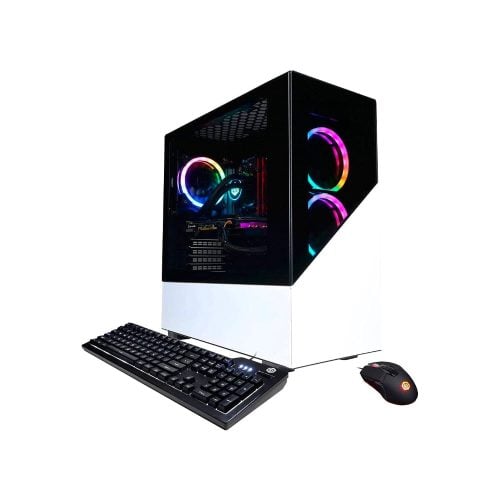 Moving on to the best bang-for-buck CyberPowerPC gaming PC, we’ve got an excellent all-AMD machine that can deliver a high-end 1440p gaming experience. While the Ryzen 7 3700X isn’t among the fastest gaming CPUs, you’ll hardly notice the difference when gaming at 1440p, the resolution this PC is made for. You might see about 5 percent slower performance in non-demanding games. Still, in graphically intensive titles such as Cyberpunk 2077, the difference between the 3700X and the fastest gaming CPUs will be just a couple of frames.

The GPU here is an RX 6700 XT, which is capable of delivering more than 60 frames per second on average at 1440p and ultra details in the most demanding AAA games. Older games and multiplayer tittles will run higher than 100 frames per second without issues. This card’s only major problem is ray tracing performance, which isn’t great. If you’re after a ray tracing-capable gaming PC, check our next pick.

The PC also includes 16GB of dual-channel memory and a great storage combo made of a 1TB SSD and a 1TB HDD. Overall, this is tons of value for the money and, regarding price-to-performance ratio, the best CyberPowerPC gaming PC you can get. The included 120mm AIO cooler is more than enough to keep the 3700X under control. Lastly, don’t forge that you can upgrade the CPU to any Ryzen 5000 part in the future, which is a huge plus. 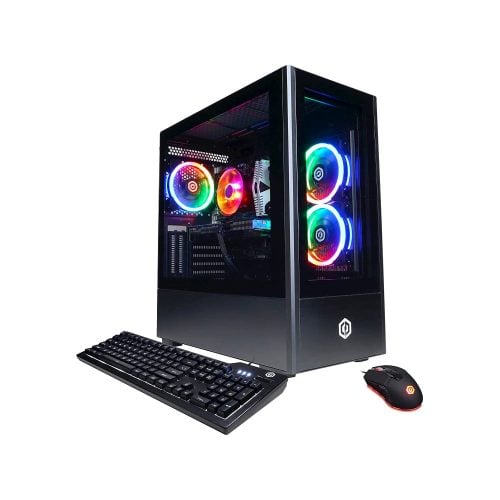 For instance, while the RX 6700 XT cannot deliver 60 frames per second on average in Metro Exodus Enhanced Edition in 1440p, the RTX 3060 Ti can run that game at about 70 frames per second. And that’s without DLSS! With DLSS enabled, the game will run even faster.

The CPU paired with the RTX 3060 Ti is a Core i7-11700F, which is an excellent solution for 1440p gaming. It’s not as fast as the fastest gaming CPUs on the market, but it’s not much slower. You can expect a couple of percent slower performance compared to, let’s say, 12700F, which is one of the best gaming CPUs you can get right now. Overall, this combo packs tons of power, and the CPU should be fast enough not to impose a bottleneck if you decide to upgrade the graphics card in the future.

16GB of dual channel memory is the regular amount for a mid-range gaming PC. As for the storage combo, a 500GB SSD and a 1TB hard drive will be enough for most users, but we’d like to see a 1TB SSD at this price. At the end of the day, this Gamer Xtreme configuration is more or less a sweet spot for 1440p gaming. With that said, it’s not the absolute best 1440p gaming PC by CyberPowerPC. If you want that, check out our next pick. 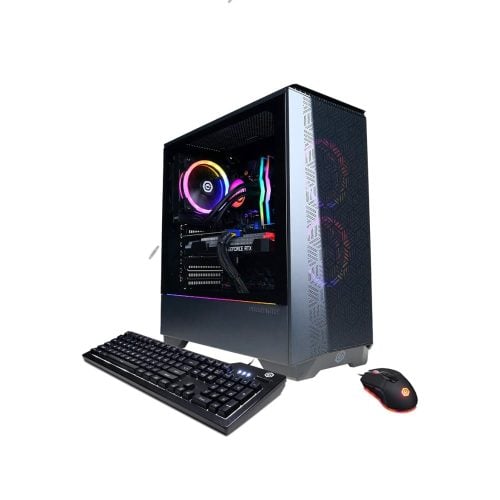 If you want the best 1440p gaming experience but don’t want to create a meteor-sized crater in your wallet, check out this combo made of Ryzen 5900X and an RTX 3070. Overall, you should get about 20 percent higher performance compared to our previous pick for about the same price increase. While it’s not the best value, this PC offers the best performance for less than $2000, at least when it comes to CyberPowerPC gaming PCs.

The GPU here is capable of delivering almost 100 frames per second on average, even in the most demanding AAA games with ultra details and DLSS enabled. This means that you can play Cyberpunk 2077 or Dying Light two at almost triple-digit frame rates as long as you don’t turn on ray tracing effects. With ray tracing, the performance will tank, but it shouldn’t drop below 60 frames per second will DLSS unless you crank RT effects to ultra.

As for the CPU, the 5900X is among the best gaming CPUs even today. Better still, this CPU is also great for CPU-intensive workloads such as video editing or code compiling. With that said, if you plan to edit videos, we recommend adding more RAM since this machine includes only 16GB of memory. Regarding storage, a 1TB SSD is fine, but no HDD storage is less than ideal at this price. Finally, considering the semi-mesh front panel, the included 120mm AIO should keep the 5900X under control in all situations. 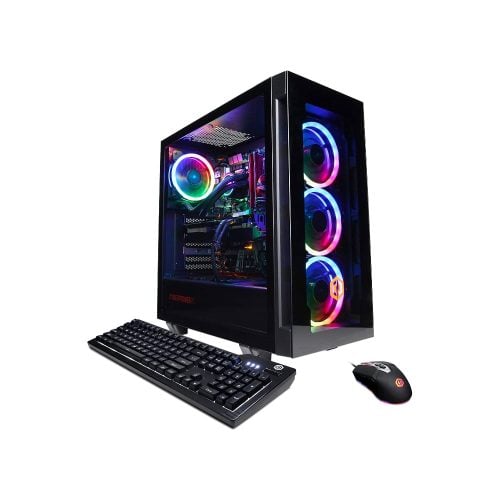 This RTX 3080-powered machine is our pick for the best high-end CyberPowerPC gaming PC. Along with an RTX 3080, you’ve also got a Core i7-12700KF, the second fastest gaming CPU, right behind the 12900K. Together, this combo is perfect for 4K gaming.

And we mean 4K gaming with smooth 60 frames per second and ultra details in the latest and greatest AAA games. You can also use this PC for 1440p gaming if you’re after 144 frames per second performance. We recommend getting one of the picks from our list of the best 4K 144Hz monitors for the best possible experience.

The RTX 3080 should also be fast enough to deliver playable, 60fps performance with ray tracing. That said, you’ll probably want to drop down to high settings if you’re going RT in 4K resolution. If you plan on gaming in 1440p, ultra details with ray [email protected] experience is possible. Just note that, in both cases, DLSS is required.

Our main issue with this PC is only 16GB of memory. Look, 16GB of RAM is enough for a vast majority of gaming scenarios. But if you like to play MS Flight Simulator or mod games until they start crashing, 32GB of memory is needed for the best possible experience. The second issue is the 120mm AIO tasked with cooling the 12700KF.

While we might see a 120mm AIO keeping the CPU under check while gaming, doing any CPU-intensive work for longer than a few minutes will see thermals go through the roof. Especially since the whole system is housed inside a zero-airflow case. A shame because the 12700KF is a perfect CPU for both gaming and productivity.

If you want a cooler capable of keeping the 12700KF under control during CPU-intensive workloads, get any of the AIOs featured in our list of the best coolers for Core i7-12700K. As for the storage, a 500GB SSD and a 2TB HDD is plenty of storage, but at this price, we’d expect something in the line of a 1TB SSD and a 2TB HDD.