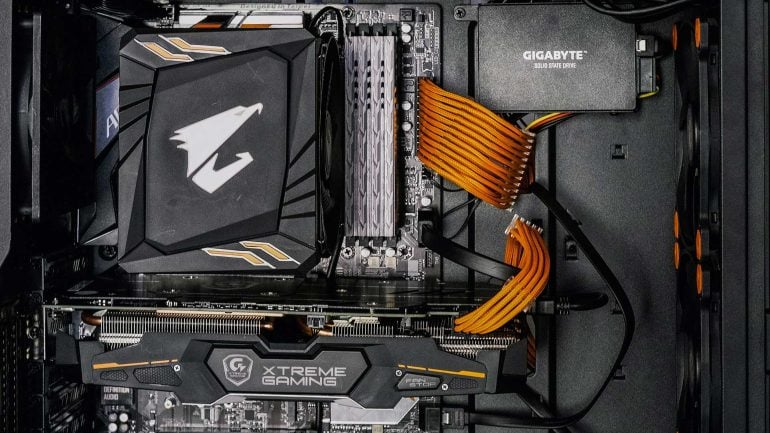 We’ve put together a list of best PC cases that can be used to build the ultimate 2-in-1 setup.

Two systems in a single PC case – a very niche thing to build, but certainly doable. There are a number of reasons why you’d build a dual system setup inside a single PC chassis instead of using multiple regular PC cases – combining a rendering workstation with a gaming setup or a NAS combined with a regular PC setup. You could also decide to have both the streaming and gaming setups inside a single case. Maybe even create a secondary system for high-security tasks while doing everything else on your main machine.

The possibilities aren’t endless, but the demand is high enough to guarantee a healthy choice of dual system PC cases on the market. And today, we’ll show you the best dual-system cases for 2-in-1 setups. We have both budget and high-end choices, systems capable of combining a regular ATX and a Mini-ITX system,  but also niche products that allow users to combine an mATX and an ITX board or two full-fledged ATX PCs inside a single case.

Do note that some of those cases require extra components, such as the dual system upgrade kit from Phanteks, a special dual-system PSU (also available from Phanteks), or a PSU power splitter, you’ve guessed it, also from Phanteks. Do note that we don’t recommend the PSU power splitter due to several, some quite dangerous, issues users have experienced. For more compact PSU options, check out our list of the best SFX power supplies. If you’re looking to build a streaming setup to go along with your current gaming setup, know that with one of the best CPUs for streaming, you could build a 2-in-1 gaming & streaming setup instead. And you could use one of the best airflow PC cases to house that setup and get the best possible thermals. 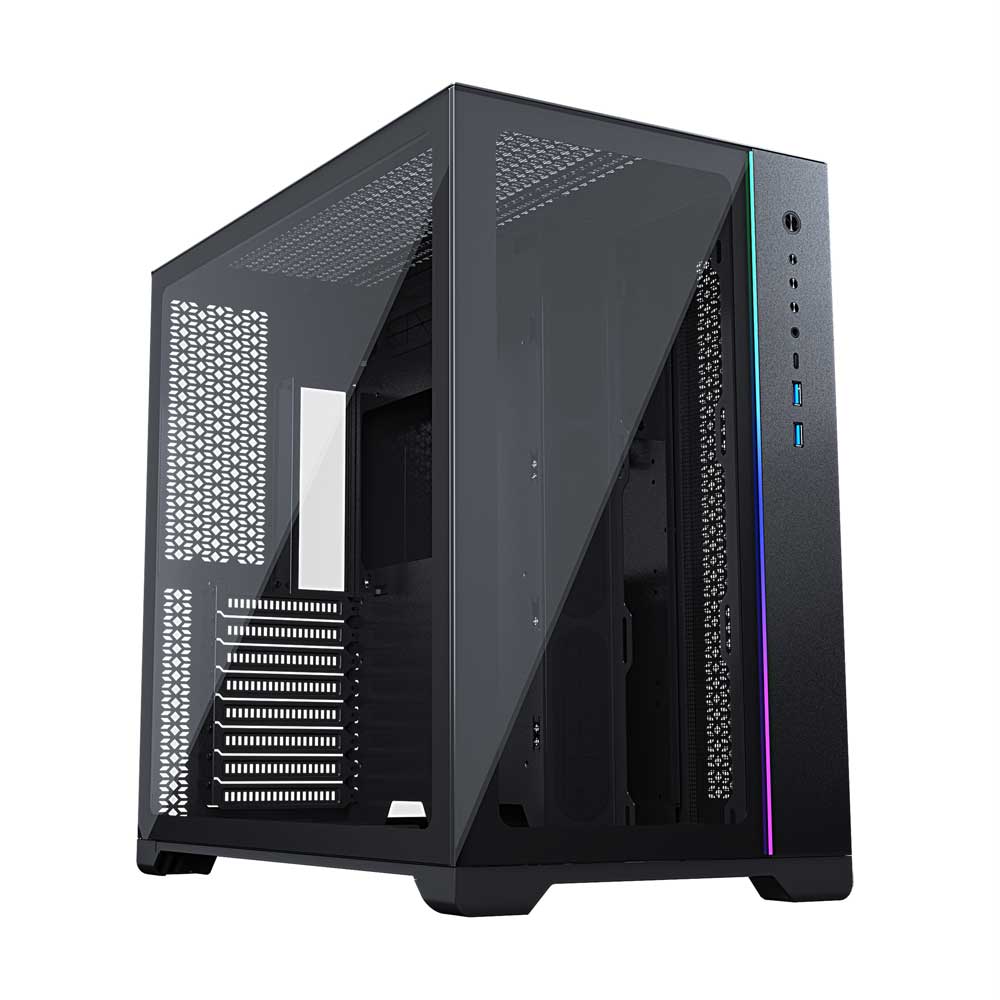 The NEO Qube from MetallicGear (Phateks’ budget case subsidiary) looks quite like the O11 Dynamic from Lian Li, but this one supports two systems inside it while costing way less. It’s not quite a budget case when compared to regular, single system housings, but if you want to build two PCs inside the same case, this is the best budget dual system case on the market for doing that.

As we already mentioned, the NEO Qube looks extremely similar to the O11 Dynamic, meaning great water cooling support, the option to vertically mount the GPU, lots of room to build inside the case, excellent cable management, and a slick design that doesn’t create a sauna inside the chassis.

On the flip side, the build quality is not perfect. As for the dual system capabilities, you can use up to an  E-ATX board for the primary system with plenty of room for the secondary system (ITX-based) on the back. The solution requires a single PSU, and, at the moment, the only choice is the Phanteks Revolt X series featuring 80 Plus Platinum certification, full modularity, and is available in 1000W and 1200W flavors.

The case supports up to nine case fans, triple 360mm radiators, up to eight storage drives (two 3.5”, five 2.5”), and it features four dust filters. Clearance for the CPU heatsink is 148mm (not great but expected in a case made for water cooling setups), while the GPU can measure up to 425mm in length. 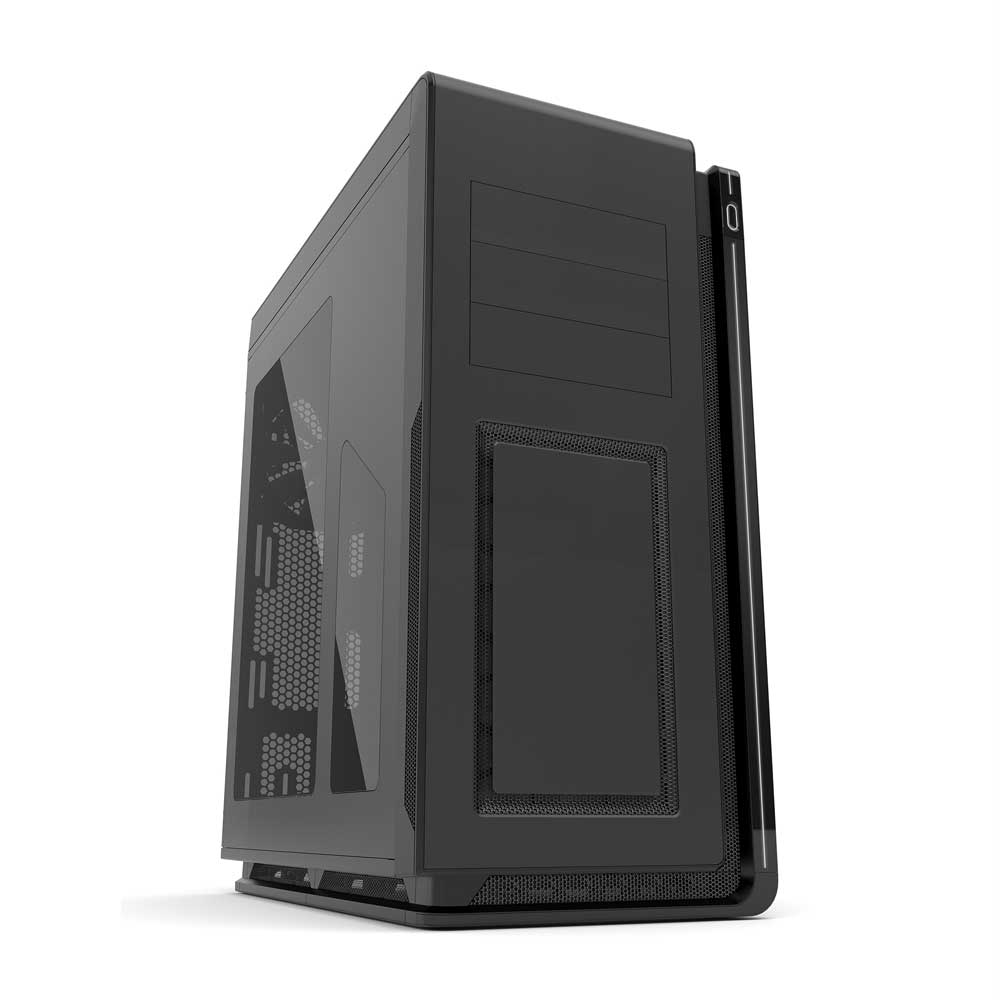 If, for whatever reason, you want to combine an mATX board with an ITX board, get the Phanteks Enthoo Mini XL. This is a massive case that supports two system builds (mATX and Mini-ITX), and that has enough room for two full-sized graphics cards, two massive CPU heatsinks, and two PSUs. While Phanteks supplies the PSU power splitter with the case, we would rather use either two PSUs (ATX + SFX) or the aforementioned Revolt X power supplies.

The case has pretty solid thermals despite the crowded insides, and you can fit up to thirteen 120mm case fans inside it. If water cooling is your thing, you can install three 240mm radiators along with a single 360mm unit. Clearance for the CPU heat sink is 215mm, and for the GPU it’s 410mm; or 289mm if you add HDD cages.

Storage support is great. There’s room for eight 2.5” drives that can be expanded to 14, and the case also has three 5.25” bays. When it comes to front panels, each of the two includes two USB 3.0 ports and combo audio jacks. The only major downside with the Enthoo Mini XL, aside from the provided PSU power splitter that’s more or less a fire hazard, is the outdated design featuring acrylic side panels. 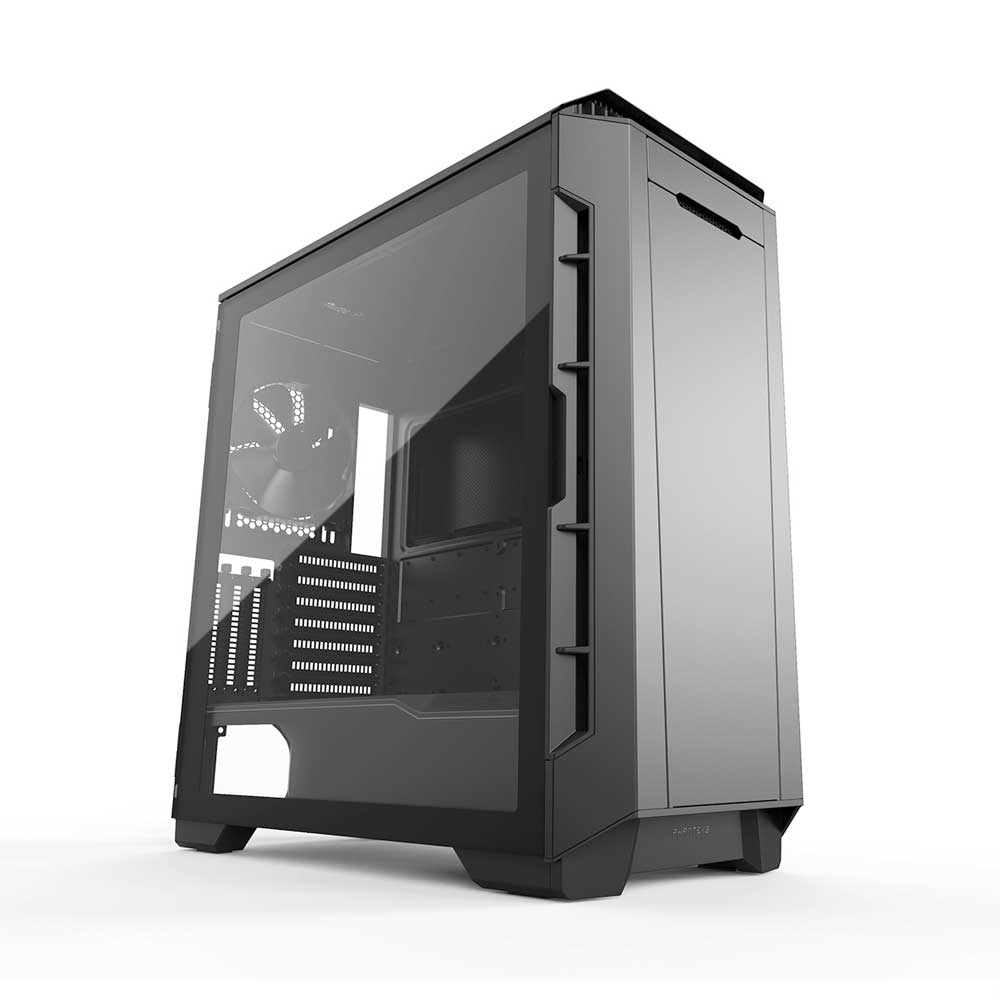 If you want support for two motherboards along with a silent performance, check out the Eclipse P600S, again from Phanteks (the company loves making dual system cases). This is a silent case that comes with a removable front panel for times when you want better thermal performance and increased airflow.

It shares the internal design with the Evolv X, meaning you can install the second system at the top, but you’ll need the dual system expansion kit. Overall, this is the best dual-system case with whisper-quiet performance.

Thermals are all right, if not a bit on the high side. You can get better thermals since the P600S supports up to a 420mm radiator on the front along with a 360mm unit on the top and a 140mm rad on the back. Plenty for two CPUs and dual graphics cards.

Another note is that if you want a GPU installed on the secondary ITX system, you’ll have to get a GPU riser card. This way, you can place the primary system’s GPU regularly, with the second GPU vertically mounted.

If you prefer air cooling, the P600S can house up to seven 120mm or six 140mm fans, with the case coming with three preinstalled 140mm units. As for the storage support, there’s room for four 3.5” drives and three 2.5” drives, but you can expand that to ten 3.5” drives, 13 drives in total.

The clearance for the CPU cooler is 190mm, with the allowed GPU length being 435mm. Do note that the secondary system has to include either a slim CPU cooler or a slim CPU block. Finally, the front panel features two USB 3.0 ports, one USB-C, and combo audio jacks. 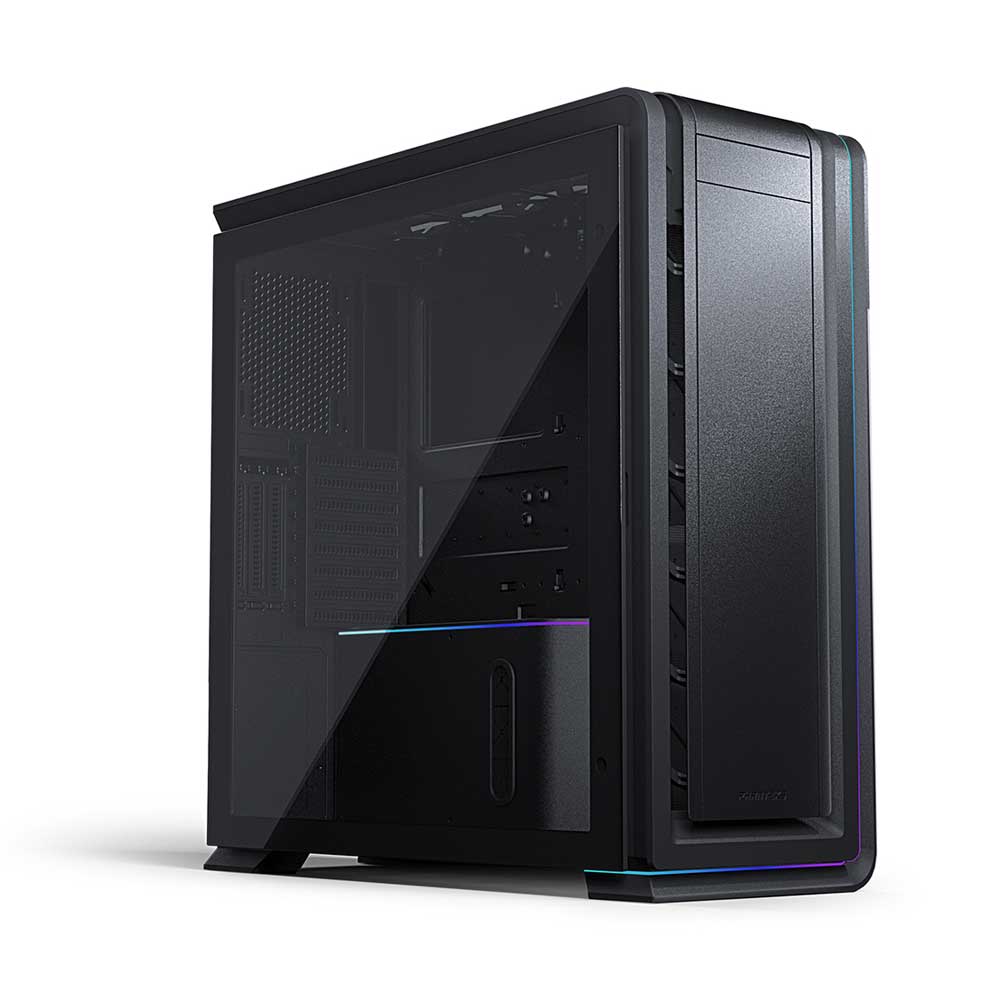 The Enthoo 719 from Phanteks is the best full tower dual system case you can get at the moment. It can house up to an SSI-EEB board combined with an ITX board, all powered by a single PSU. Interestingly, the case has support for two PSUs, but annoyingly you have to choose either two PSUs or a dual system setup. In other words, when building two systems, you’re limited to the Revolt X power supplies.

The clearance shrinks to 60mm or 80mm, depending on which slot you install the secondary GPU into. The good news is that the Enthoo 719 supports multiple 480mm radiators, so building a custom loop to cool both systems at once shouldn’t be an issue.

If you’re more interested in air cooling, the chassis can house up to fifteen 120mm fans. The case features a combination of old school (just look at the front panel) and modern design (glass side panel, subtle RGB implementation on the bottom of the case and above the PSU shroud), resulting in a case that looks like it came from 2016 until you turn it on.

As for the front panel, you get four USB 3.0 ports and one USB-C, and it looks like the front panel does include two power buttons. Last but not least, there’s room inside for up to twenty-three storage drives. 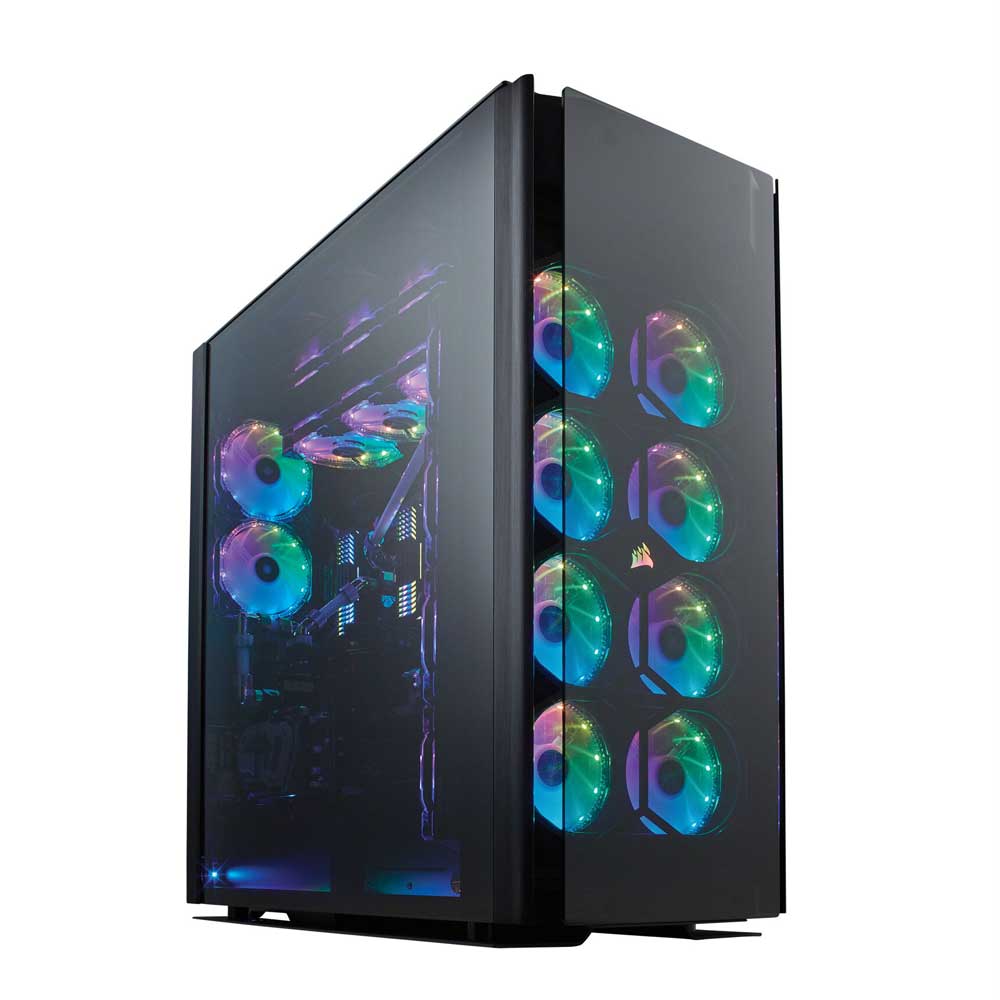 If you have the cash, space, and want the ultimate water cooling dual system build, check out the Obsidian 1000D from Corsair. This is a beast of a PC chassis & the best dual system case for water-cooling builds.

The 1000D can house one ATX and one M-ITX system. There’s enough room inside for two power supplies (ATX + SFX) along with dual 480mm radiators. Alternatively, you can equip the chassis with up to 18 case fans. Insane, no matter how you look at it.

Build quality is superb, with two massive glass panels on the front and the side along with a built-in fan controller and plenty of room for the two systems. The two tempered glass panels are smoked, making the 1000D look like the monolith from 2001: A Space Odyssey.

The only potential downside, aside from the price, is “only” eleven storage bays (six 2.5” bays and five 3.5” bays), which could be too little if you’re building a workstation + NAS build. If you want to see the best housing options for a NAS build, visit our list of the best NAS cases. Back to the Obsidian 1000D, the front panel is another showoff point for the housing, featuring four USB 3.0 ports and two USB-C 3.1 gen2 ports, all RGB illuminated. 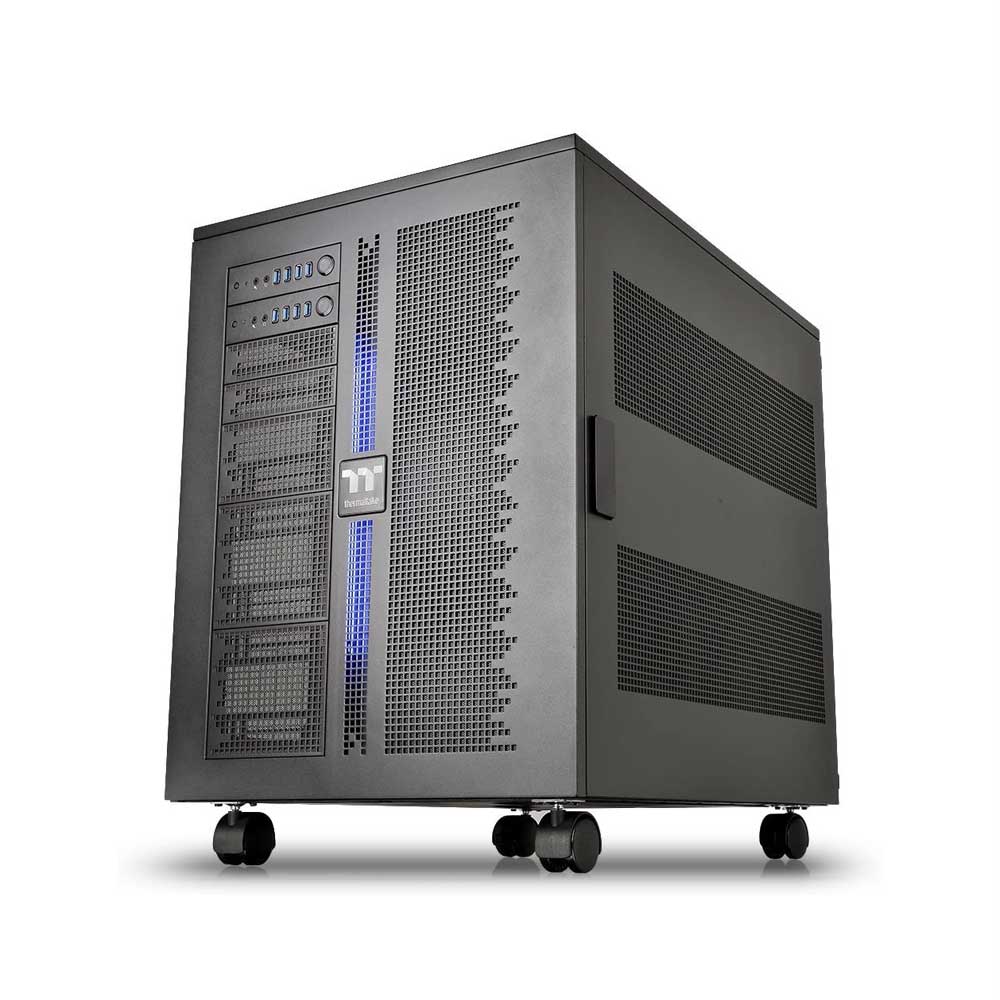 The Core W200 is basically a dresser on wheels that can house two full-fledged ATX systems. The chassis also supports XL-ATX boards, which means you can build two SSI-EEB systems inside one case, each powered by a single ATX power supply. In other words this is the best dual system chassis for anyone looking to build two full-sized, ATX PCs, inside a single case.

This sounds incredibly cool and quite insane at the same time. The build quality is solid, with a glass side panel, lots of HDD cages, and more than enough room for cable management.

Thermaltake designed the Core W200 for liquid cooling. You can install either two 560mm radiators or one 600mm rad on the top, one 360mm unit on the front, two 280mm units on the bottom, and up to two 600mm radiators (!!!) on the right side of the chassis.

The case also supports two pumps, one on each side. The clearance for the CPU coolers is 200mm, and the GPUs can be up to 470mm in length with the HDD rack installed.

Storage support is insane like the rest of the case. You can install up to twenty-four storage drives in total. The front panel features eight USB 3.0 ports, four for each system, along with two sets of combo audio jacks.

While the Core W200 isn’t a looker this is the biggest dual-system PC case you can find on the market. With the potential of housing two extreme workstation builds, this chassis is perfect for users whose imagination and wallets have no limits.