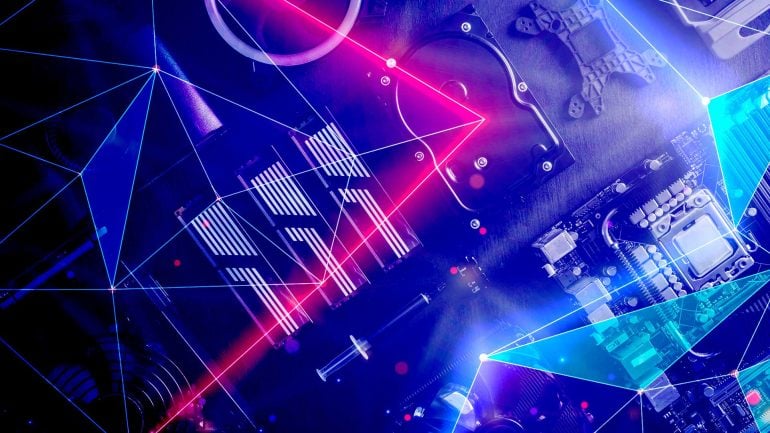 For $2000, you can get a top-of-the-line gaming PC equipped with a high-end GPU and a fast gaming CPU. Even if you’re limited to the prebuilt PC market. We’re talking about RTX 3070 and RTX 3080 GPUs coupled with 12th gen Core i5s & i7s as well as Ryzen 5000 CPUs. The only downside is that, even at this price, most prebuilt gaming PCs include flashy cases with less-than-ideal airflow.

If you’re looking for the best gaming PC under $2000, you will find them right here. Our list includes both value picks that leave some room in your budget for a gaming monitor as well as configurations that are sitting right at the $2000 mark. We also included a couple of great deals, one of which is a refurbished PC that packs an RX 6800 XT for a price of an RTX 3070 – level prebuilt PC. Intrigued? You better be! 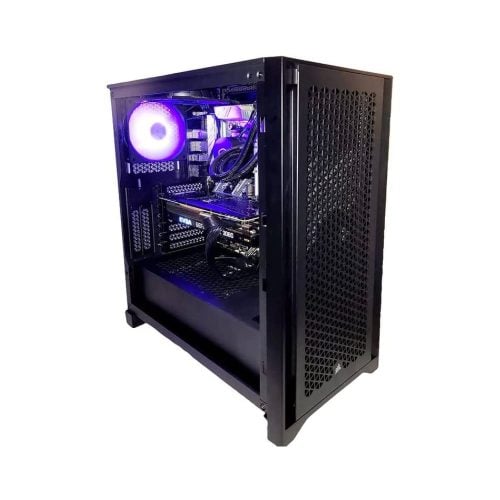 The Oracle is what we’re calling a great deal! This prebuilt PC packs superb hardware while commanding a price notably south of $2000. First, you’re getting an RTX 3080, a card that’s a perfect choice for 4K gaming. Also, for a high refresh rate 1440p gaming. And by that, we mean a high refresh rate experience in the latest and greatest AAA titles, such as AC: Valhalla, with all options turned to the max.

Another massive plus for The Oracle is that the whole system won’t suffocate and melt away since it’s packed inside the Corsair 4000D airflow case. Finally, we have a prebuilt PC packed inside a case with excellent airflow! And even better, a quality case didn’t make this PC pricier than its competition. 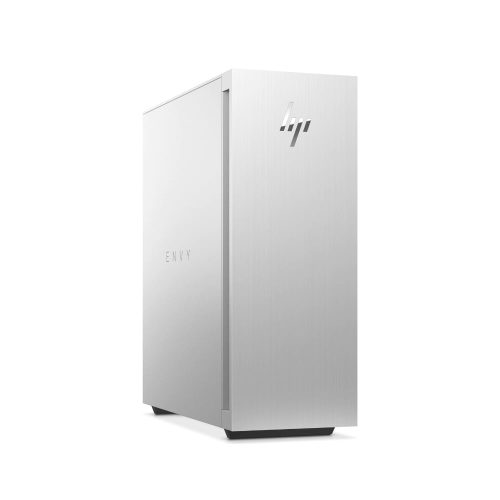 If you have $2000 and want to spend it all, down to the last cent, we’ve got something for you. The CUK Envy TE02, based on an HP prebuilt configuration, is the best overall prebuilt gaming PC for less than $2000. And aside from the generic case, this PC packs a metric ton of great gaming hardware. First of all, this is another pick on this list that comes with an RTX 3080. In other words, expect insane 1440p performance and higher than 60fps 4K performance, especially in games with DLSS support.

The CPU here is the latest Core i7-12700F, one of the best CPUs you can get at the moment, no matter whether you’re gaming or using the PC for CPU-heavy workloads. The 12700F has virtually the same gaming performance as the 12700K/12700KF while costing less and being way easier to cool. Even in heavy multithreaded tasks, the non-K i7 is less than 10 percent slower than the 12700K on average.

While you probably won’t notice the difference between the 5600X and the 12700F in gaming, 32GB of memory instead of 16GB found in The Oracle could mean a bit faster performance in MS Flight Simulator and fewer stutters in modded Cities: Skylines. Finally, you’ve also got a 1TB NVMe SSD coupled with a 3TB HDD.

Overall, for about a 15 percent higher price than The Oracle, you’re getting 32GB of memory instead of 16GB, a faster CPU, and more storage. On the flip side, we’d pick the Corsair 4000 Airflow over this generic HP case any day of the week. Also, it looks like this build lacks an AIO CPU cooler. 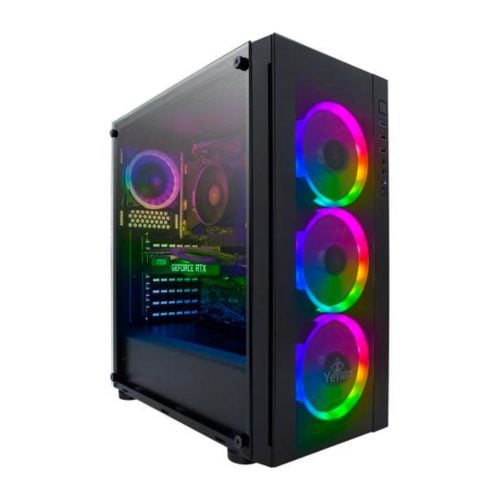 If you’re looking for the best value prebuilt gaming PC under $2000 and you prefer Nvidia GPUs over AMD, get the YEYIAN Katana R02. You won’t find a better combination of gaming hardware even in more expensive builds. The only reason to get anything pricier is if you want a faster graphics card or if 16GB of memory really doesn’t work for you.

The RTX 3070 here is perfect for a 1440p high refresh rate experience in most games. The card can also run games in 4K with some visual settings turned down a notch or with DLSS. As for the 5600X well, if it’s good enough for the RTX 3080, it’s good enough for its slower cousin. The Katana R02 also comes with 16GB of DDR4 3600 MT/s memory, which should give you a couple of frames more than the DDR4 3200 memory.

Storage-wise you’re looking at a single NVMe SSD with a capacity of 1TB. Just right for most gamers and enough to store more than a dozen of games on top of the OS. Last but not least, the case does look nice but the thermals will probably be far from ideal. Especially since the stock CPU cooler is used for cooling off the said 5600X. 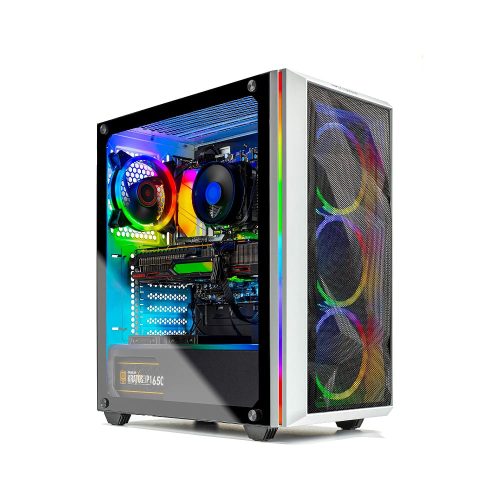 Our value pick that packs an AMD graphics card costs almost the same as the value Nvidia pick while offering a bit faster GPU. The RX 6800 is about 10 percent faster than the RTX 3070, both in 1440p and 4K. In other words, this value pick is the faster of the two. Especially since the RX 6800 also packs 8GB of extra video memory. Not that important in most games, but some titles (Doom Eternal, Ghost Recon Breakpoint, Deathloop) won’t work great with ultra textures at 4K.

For instance, when using Ultra Nightmare settings, the RX 6800 is more than 30 percent faster than the RTX 3070 in Doom Eternal in 4K. On the flip side, the RTX 3070 has much better ray-tracing performance and DLSS support. Considering the two value picks cost almost the same, it’s up to you to decide based on your preferences and what you deem important.

As for the rest of the specs, they’re pretty much the same, with one significant difference. First of all, the CPU’s the same. The 5600X is an excellent pairing for the RX 6800, and this time, it looks like the CPU heatsink’s a bit larger, so the cooler should be quieter. Next, 16GB of DDR4 3200 MT/s memory will give you like two frames less on average than 3600 MT/s memory, so the “slower” memory found here won’t be an issue.

You also get a 1TB SSD, the same as in our Nvidia value pick. What’s different is that the Skytech Chronos features a modern case with a mesh front panel. In other words, expect much lower thermals here than in our Nvidia value pick, along with less fan noise since the fans won’t have to ramp up to their max RPM in order to keep the components cool. 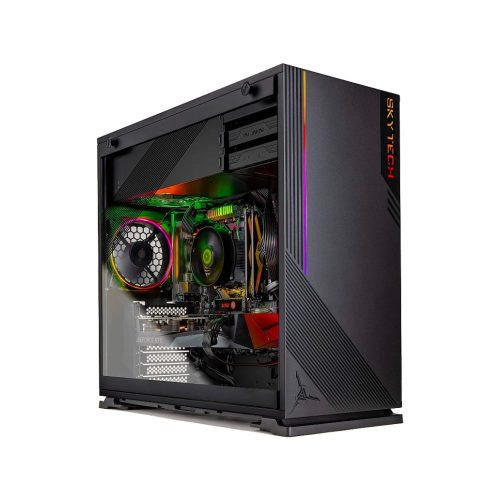 If you’re looking for an RTX 3070 – level of performance but need 32GB of memory, check out the Skytech Azure. This is one of the best prebuilt gaming PCs under $2000 we could find. It doesn’t have the best price, GPU, or CPU, but it does offer an outstanding overall package while having about 10 percent higher price than our value picks.

Aside from the RTX 3070, you’ve also got a Core i7-12700F CPU. Now, this is a great gaming CPU, but it also packs a lot of power for CPU-heavy tasks. But video editing or rendering with 16GB of memory is far from ideal. So, instead of paying more cash for a prebuilt that packs a faster GPU and more memory, you can spend less and get this PC instead.

Storage options include a 1TB NVMe SSD. The case the Skytech Azure is housed in looks like the InWin 101. While not as toasty as most other cases found in prebuilt configurations, the InWin 101 still doesn’t have the best airflow. On the other hand the case does have a pretty wide side air intake, covered by two RGB case fans. In other words, while the components inside won’t toast, don’t expect praiseworthy thermal performance. 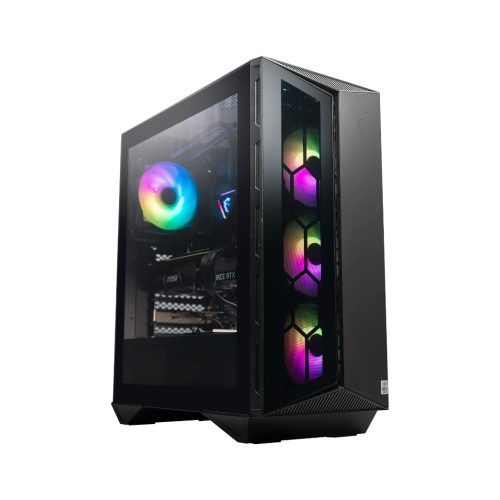 The MSI Aegis ZS offers the best performance in the class to everyone looking for the best prebuilt gaming PC for less than $2000 equipped with a Ryzen 7 processor. The Ryzen 7 5800X found here is one of the fastest gaming CPUs you can get, and here it’s paired with an RTX 3070 Ti GPU. Overall, the level of gaming performance of this PC should be about the same as in our AMD value pick. However, the 5800X is notable faster than the 5600X in CPU-heavy tasks such as video editing.

When it comes to the GPU, the RTX 3070 Ti has about the same raw performance as the RX 6800 and is about 10 percent faster than the RTX 3070. The card’s a much better choice for users who want to enjoy ray-tracing effects. But, again, we’re only looking at 8GB of video memory here, which will hurt the performance in 4K when playing certain games with all options set to ultra.

The MSI Aegis ZS comes with 16GB of dual-channel memory, which is okay at this price point. Putting a regular RTX 3070 instead of the Ti version could probably allow MSI to put 32GB of memory, but hey, you’ll be fine in like 99 percent of gaming scenarios. Finally, the PC also includes a 1TB SSD.

As for the case, it looks like it has some openings at the front that should increase airflow. With that said, we wouldn’t expect great thermals, especially since a 120mm AIO used here is less than ideal cooling solution for the 5800X. If you find thermals too high for comfort, replace the preinstalled 120mm AIO with one of the coolers from our list of the best CPU coolers for Ryzen 7 5800X. 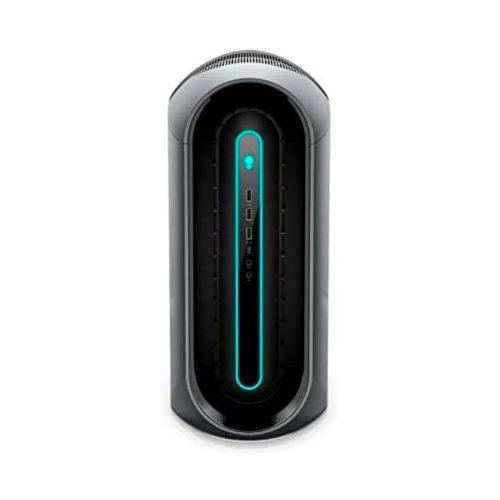 Finally, we have one refurbished prebuilt PC that packs an RX 6800 XT while costing less than our Nvidia value pick, making it the cheapest PC on this list. This refurbished Alienware Aurora R10 includes the aforementioned RX 6800 XT and a Ryzen 5 5600X. This combo is as fast in games as our top overall pick, which means higher than 60fps experience in 4K with all settings cranked to the max or a fast-refresh-rate 1440p experience.

The downside is that the RX 6800 XT isn’t best suited for games with ray tracing support. The card’s massively slower than the RTX 3080 in most titles when you turn on ray-tracing effects, and it doesn’t support DLSS. However, if you aren’t interested in ray tracing, this is one of the best gaming PC deals you can find, prebuilt or not.

The included 5600X is liquid-cooled, but considering this is Dell we’re talking about, we reckon they used a 120mm AIO. Not great but just enough for the 5600X, despite the fact that the CPU has to sweat inside the oven of a case that is this plasticky Alienware enclosure.

The rest of the specs include a 512GB SSD and 16GB of dual-channel memory. Not that much storage space, but it’s not like you can’t get another SSD and still pay much less than what you’d have to pay for a new gaming prebuilt PC powered by an RX 6800 XT.