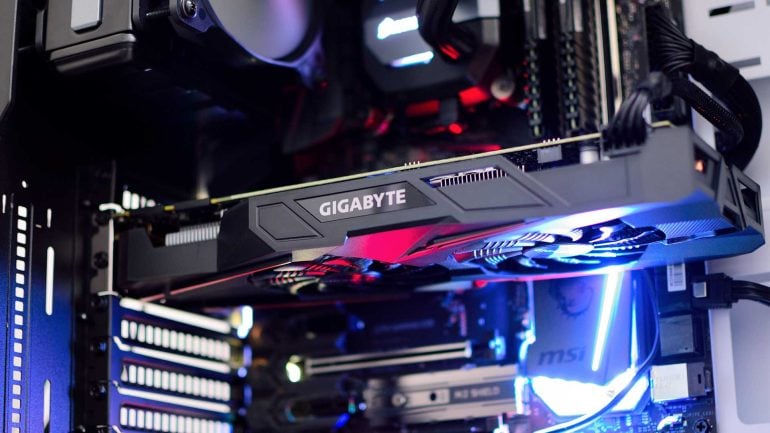 With the release of the Ampere and Big Navi GPUs virtually every card, starting from upper midrange is a hulking dual-slot (at least) beast with a three-fan design and ITX unfriendly length. There are RTX 3070 and 3060 Ti models with two-fan cooling systems but the bulk of models are quite chunky. You can find out more about the two aforementioned GPU models and more by visiting our graphics cards section.

Now, when mounting a two and a half slot, three-fan card with a heatsink heavy enough to crush small animals to death the card will probably bend a bit when slotted, it’ll start sagging. One solution for this issue is to get yourself a GPU brace. If you want to check the best braces simply scroll down and you’ll find the best GPU braces to stop graphics card from sagging. 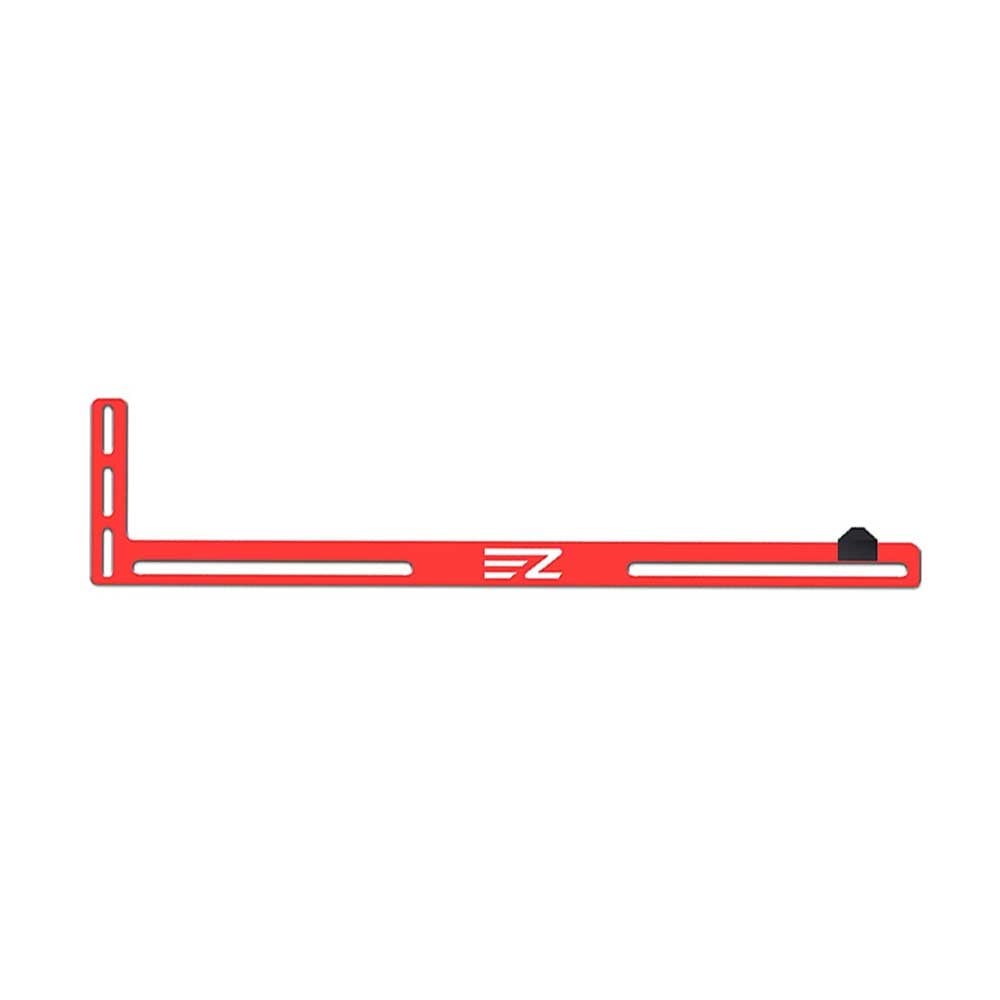 If you want something simple but effective just get the EZDIY-FAB GPU Bracket. This is easily the best value GPU brace on the market. It’s easy to install, it’s cheap, and it’ll hold your GPU straight, which is its primary purpose. The bracket has an adjustable rubber pad that provides support making this GPU bracket more or less a universal size.

The installation is pretty simple. All you have to do is some screwing and you’re set. As for the downsides, it would be great if we’d had multiple rubber pads of different sizes. Other than that, this is the best budget GPU bracket you can find. 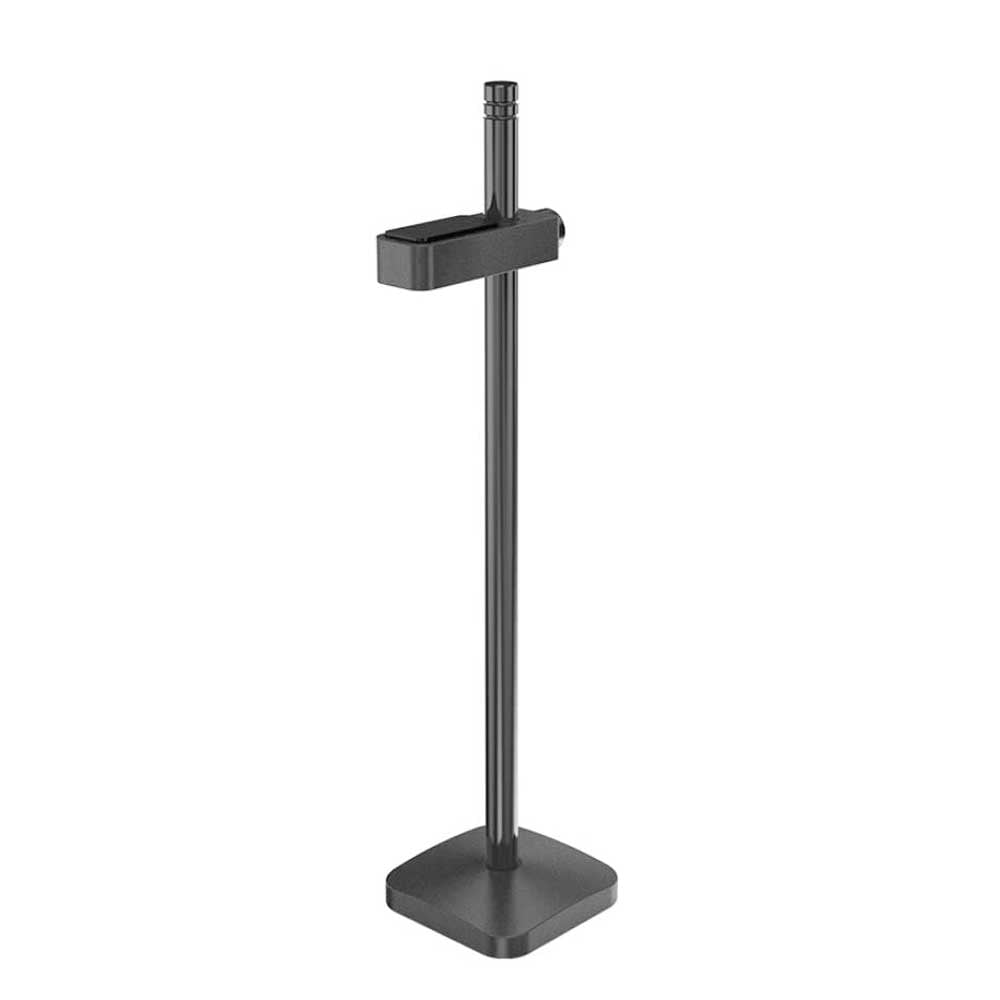 The best vertical GPU brace comes from MHQJRH (whatever that means). It’s affordable, made of anodized aluminum, and comes with a small rubber pad on the base of the support in order to prevent damage to the GPU. The foot isn’t magnetic and it doesn’t have a rubber sole, but it stays pretty firm once installed. 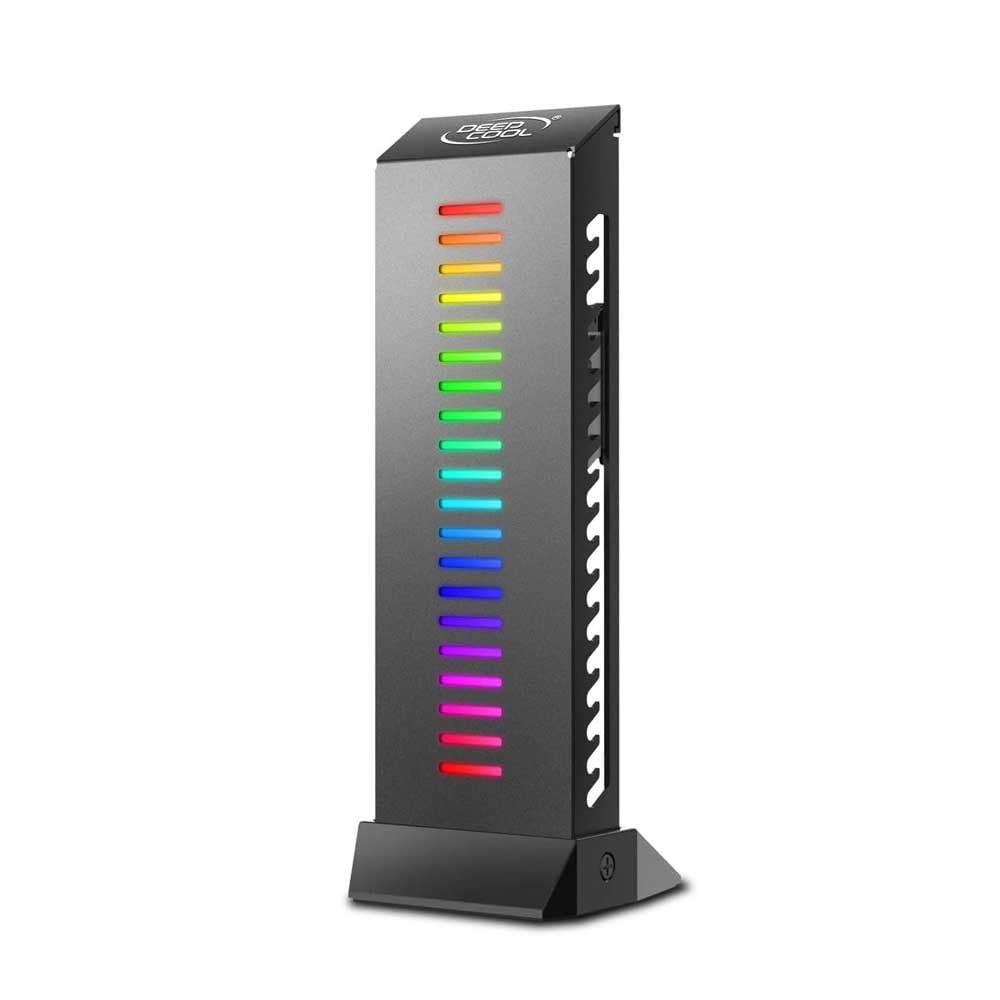 Of course that RGB GPU holders are a thing. If you’re on a tight budget the best value RGB GPU brace is the DeepCool GH-01. Not only does it come with a nice ARGB LED array, this RGB GPU brace can also hide PCIe cables, improving the looks of your build on multiple levels.

The holder can be freely vertically adjusted and you can install it both in cases with and without a PSU shroud, thanks to the base extender. The support has small rubber pads on the top, to prevent damaging the card. As for the base, it isn’t rubberized or magnetic, but it looks like it won’t be moved that easily. Do note that this is an ARGB device so you’ll need addressable RGB headers on your motherboard. We have the best RGB motherboards guide in case you need lots of RGB headers. 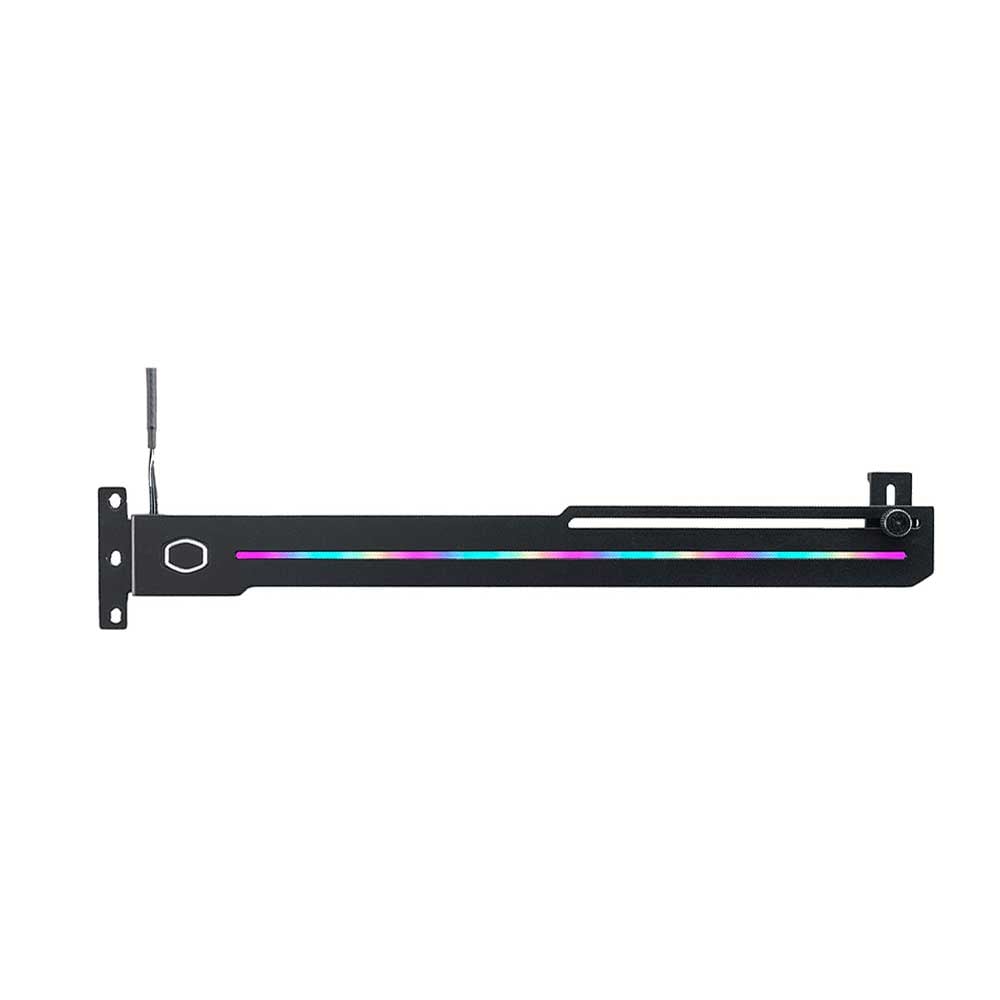 Cooler Master is known for their CPU coolers, case fans, and pretty solid PSUs but the company started to diversify its offering and now we have the Cooler Master ELV8, an impressive-looking ARGB GPU support brace. The ELV8 is the best ARGB GPU bracket you can get right now.

It’s made of quality materials, its RGB strip looks wonderful, and this bracket will definitely be an excellent addition to any RGB build. Now, this brace isn’t made for the longest cards on the market. If you have an AIB RTX 3080 or pretty much any RTX 3090 model, it’s better to skip this one. If you’re thinking about getting an RTX 3090 you can check our guide for the best RTX 3090 graphics cards.

As for the downsides, the Cooler Master ELV8 is quite expensive. It’s much pricier than our budget RGB pick. Also, the plastic support found here is of lower quality than the metal ones found on most other models. But, it does feature the best overall design and has the best RGB implementation we’ve seen in a GPU brace. 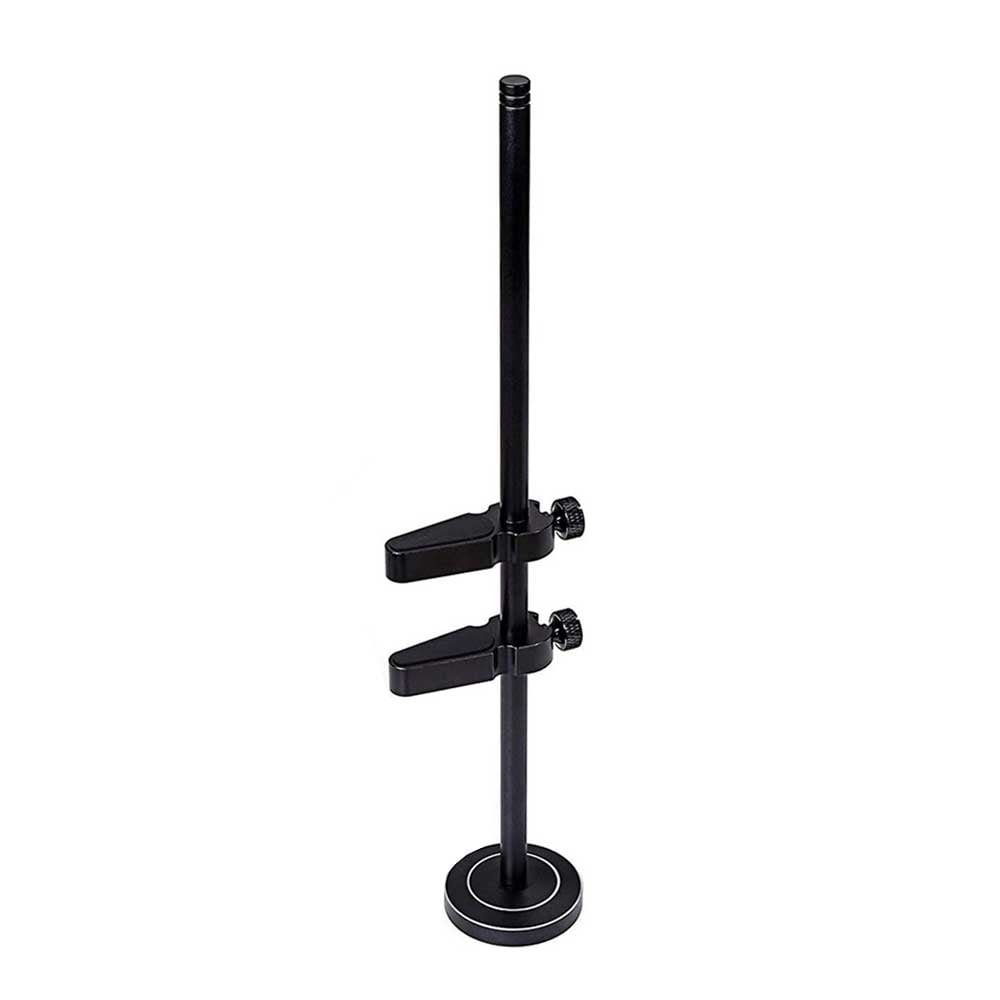 Finally, if you’re rocking an SLI setup, check the best GPU bracket for SLI rigs. This GPU brace from Glotrends and it’s pretty much the best GPU brace support you can find that doesn’t come with fancy features. It has two metal supports, both fully vertically adjustable. It also comes with a magnetized base, perfect for not slipping around.

This GPU support has a small rubber pad on the top and it looks like screws used for adjusting the height are firm and quality made.

What’s GPU sag and can you prevent it?

GPU sagging isn’t anything new. Back in the day when we started getting dual-slot GPUs with massive cooling systems, many people started noticing their graphics card bending a bit. They were too long and heavy for the screwed-in bracket support on the PC case. And today, the issue is as widespread as ever thanks to the ungodly sizes of cards such as the RTX 3080, RX 6800 XT, or the RTX 3090.

As whether the GPU sagging has detrimental effects on your GPU or motherboard, GPU manufacturers perform intensive bend, flex, extreme drop, and other sorts of torture tests on every GPU. in most cases, you shouldn’t worry about it. A bent GPU will only hurt your system’s visual impression. Graphics cards with backplates, especially made of metal, should experience a smaller degree of GPU sagging, so that’s something.

Now, if your card’s experiencing extreme GPU sag well, constant bending combined with massive size and multiple years of applying a constant force on the PCB, PCIe slot, and GPU components could lead to a malfunction. No matter the reason why you want to prevent your graphics card from going crooked, the best way to do that is by getting a GPU brace, or a GPU bracket. Whatever you want to call it. It’s easier and more pleasing to the eye than most DIY solutions and it’s pretty cheap, too.