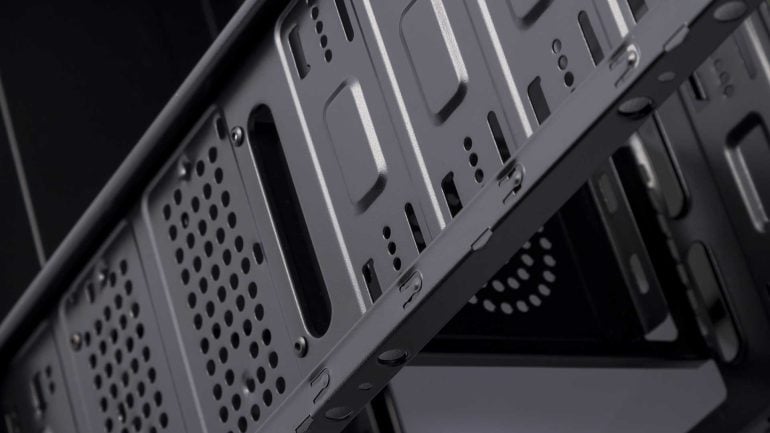 Horizontal PC cases were rather popular, back in 1994. Ever since then, tower-style PC cases have taken over the market. These days, horizontal PC cases are mostly used for office machines, and HTPC builds. The market is quite a niche one, so getting a perfect case is at the same time easy and complex.

Before we start, we’d like to share a couple of articles our readers might find interesting. First of all, many horizontal chassis have limited GPU clearance, so maybe you should read our guide for the best low-profile graphics cards. Next, our best SFX power supplies list could be helpful since many horizontal case models only support SFX PSUs. Finally, most horizontal models have very limited CPU heat-sink clearance, so picking an AIO from our list of the best 240mm AIO liquid coolers could end up being a perfect solution for that issue. 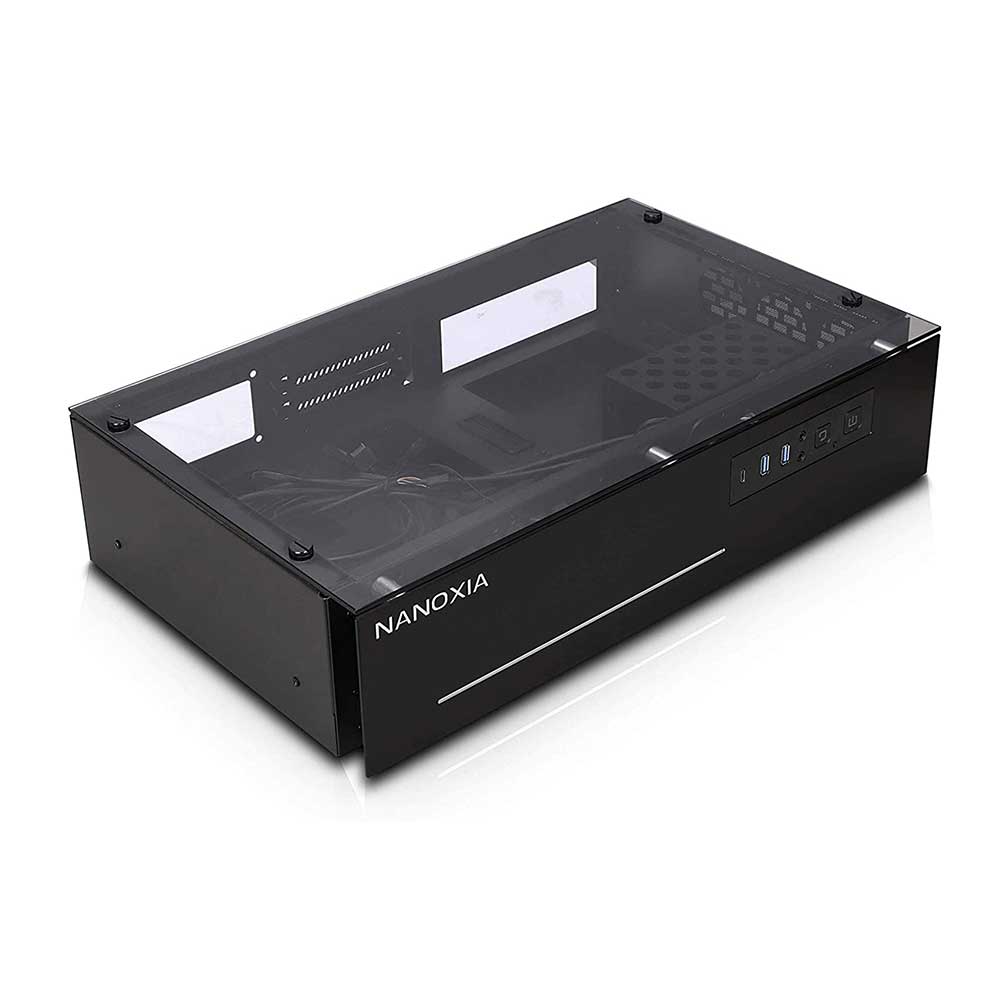 We’re starting with a case that’ll be quite interesting to people looking for a horizontal case that supports high-end components. The Nanoxia Project S Mini is a quality-made case that’s not too expensive, and that comes with support for dual-slot GPUs up to 267mm in length.

There are dual-fan RTX 3070 cards out there that fit the bill, meaning you can fit an impressive gaming rig inside the Project S Mini. If you want to check out different RTX 3070 models, read our list of the best RTX 3070 aftermarket cards.

As for the CPU cooler support, you can use air coolers up to 60mm in length. That’s not tall enough for high-performance low-profile coolers, but you can fit something like the Noctua NH-L9a-AM4, ID-Cooling IS-30, or the Scythe Shuriken 2, couple it with the Ryzen 5 5600X, and end up with a quite powerful gaming PC.

Other specs include excellent cooling with support for up to five case fans, enough room for SFX or SFX-L PSUs, and three storage drives (two for SATA SSDs, and one for HDD). The design is immaculate, with a minimalist front side, top glass panel, and even a bit of RGB put in for good measure.

The entire bottom panel can be pulled out, making this case the easiest to work with. The case comes with dust filters, but there’s no PCIe riser in case you’re going for the horizontal GPU mount. Overall, an excellent horizontal case purpose-built for gaming systems. 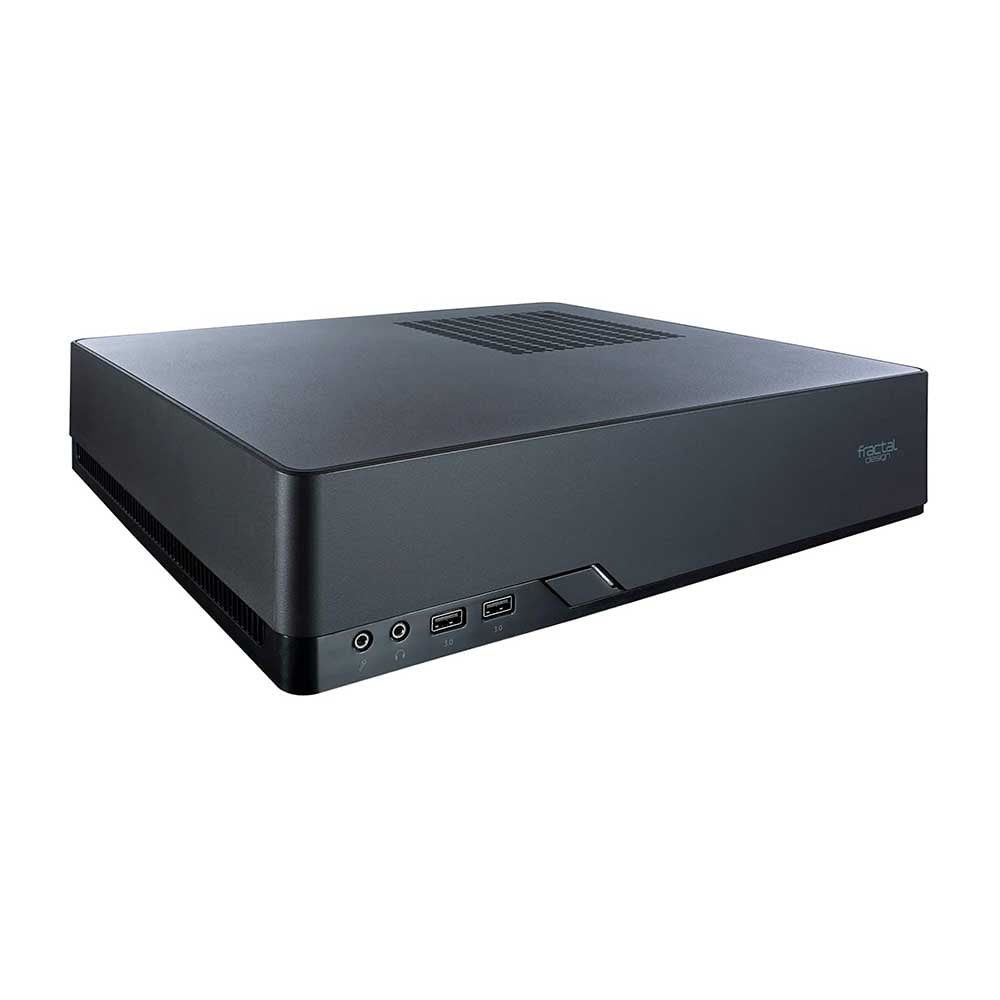 Another horizontal case built specifically for gaming builds is the Fractal Design Node 202. And Fractal did everything right except the airflow, making the Node 202 an exceptional case that can get rather warm.

The good thing is that there’s room for two 120mm case fans in the GPU enclosure, easing the thermal burden on your GPU. As for the CPU cooler clearance, you can use coolers up to 56mm in height. Not great, but enough for the Noctua NH-L9a/NH-L9i.

The design is minimalistic, in line with the PS4 Slim or the Xbox Series X. The Node 202 will look excellent under any TV; just make sure to have enough vertical clearance to prevent the GPU and CPU from getting too hot.

Considering the GPU compatibility, you could fit something like the RTX 3080 XC3 from EVGA (officially 2.2 slots, but it should fit given that people have managed to fit a 2.7-slot RTX 3080 TUF in the Node 202). You can also fit the RTX 3080 Founders Edition card if you can somehow find it.

The case supports SFX PSUs only and comes with space for 2.5” SSDs. You also get a PCIe riser card. There are dust filters on all sides sans the top one, and the Node 202 does not support case fans aside from the aforementioned two 120mm fan enclosures in the GPU compartment.

Overall, a great case, but watch the thermals. If you plan on putting a high-end card inside this case, we highly recommend undervolting it. If you want to learn how, read our CPU & GPU undervolting guide.

3. SilverStone RVZ03: Best vertical case that can be used horizontally 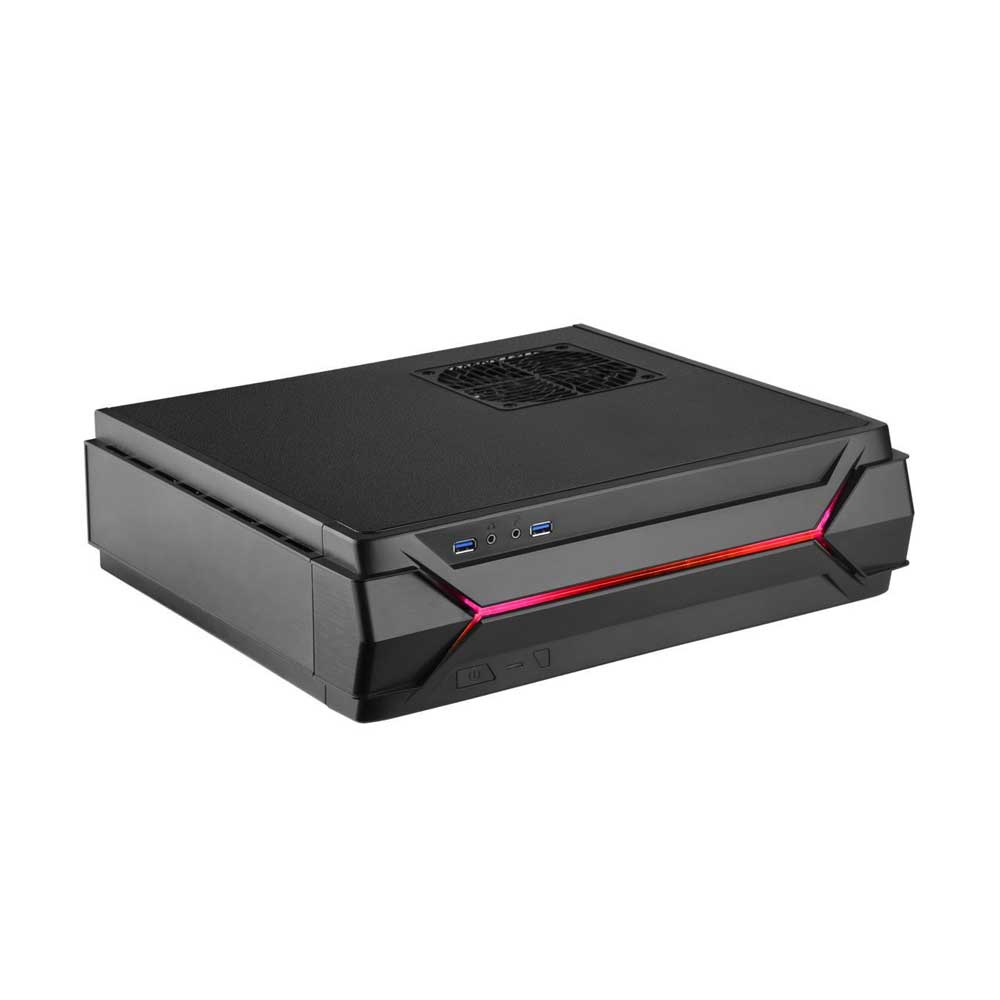 The SilverStone RVZ03 comes with multiple colors and RGB flavors, but all variants share the common feature of being primary vertical slim PC cases. The thing is, you can freely use the RVZ03 horizontally; just don’t forget that the CPU fan will be covered in this position, resulting in higher thermals.

As for the regular thermal results, the RVZ03 rocks. It’s one of the coolest Mini-ITX cases around, thanks to its three 120mm fan mounts. The case also has room for a dual-slot GPU up to 330mm in length, a CPU cooler up to 83mm in height, and an SFX PSU.

In other words, you can build an RTX 3080 & R9 5900X rig inside this case without issues. Just keep the CPU at stock clocks and get a high-performance, low-profile air cooler, like the be quiet! Shadow Rock LP or the Noctua NH-L12S.

When it comes to storage drive support, you have space for four 2.5” drives but note that going with a PSU longer than 140mm will leave one 2.5” drive mount impossible to use. Now, the ARGB version of this case supports AIO coolers. The thing is, the clearance is so limited that most AIO coolers simply won’t fit. If you want this case, you’ll likely have to use an air cooler for your CPU.

Overall, the RVZ03 is one of the best vertical PC cases around, and it looks amazing when used horizontally. Just watch about CPU thermals, maybe put the case on a stand to have some bottom-side clearance, and you should be fine. 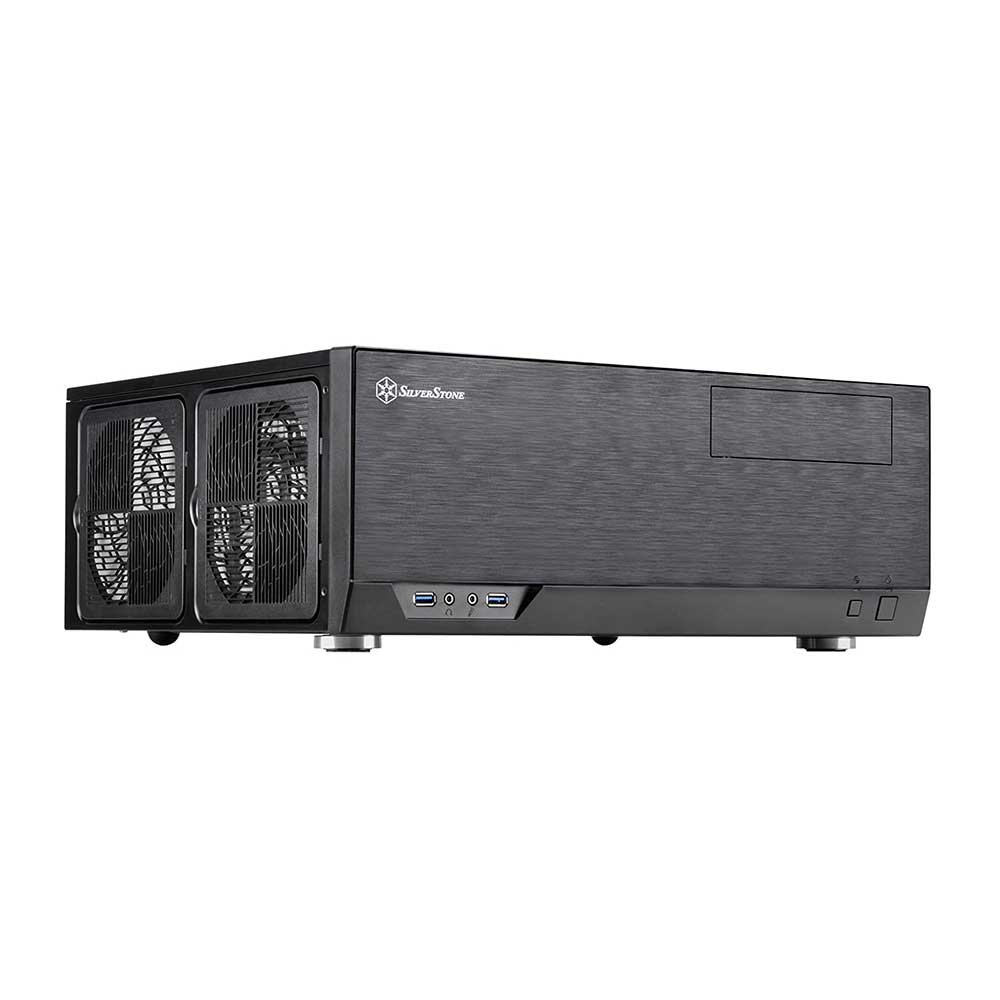 The SilverStone GD09 looks like a simple HTPC case, but this one’s the best horizontal PC case for HTPC builds. This is an excellent case if you want a powerful VR or living room gaming PC and don’t care about the size of the chassis.

The GD09 is quite thick and asks for a lot of space under the TV, but if it can fit, you’ve got yourself an HTPC that supports ATX boards and GPUs up to 309mm in length. The CPU cooler can go up to 139mm in height, meaning you can install a large assortment of quality air CPU coolers inside this case.

As for the thickness of the GPU, don’t worry; the case has enough room for seven expansion slots. You don’t have to worry about GPU cooler design here. When it comes to the cooling system, it’s pretty effective.

The case is cooler than most other similar designs thanks to support for up to four case fans (two come preinstalled with the case). There’s space for one 5.25” drive and up to two 3.5” and 2.5” storage drives. Overall, this is a chunky but quality HTPC case that can be a great base for a beastly gaming rig. The only downside is that it doesn’t support AIO coolers. 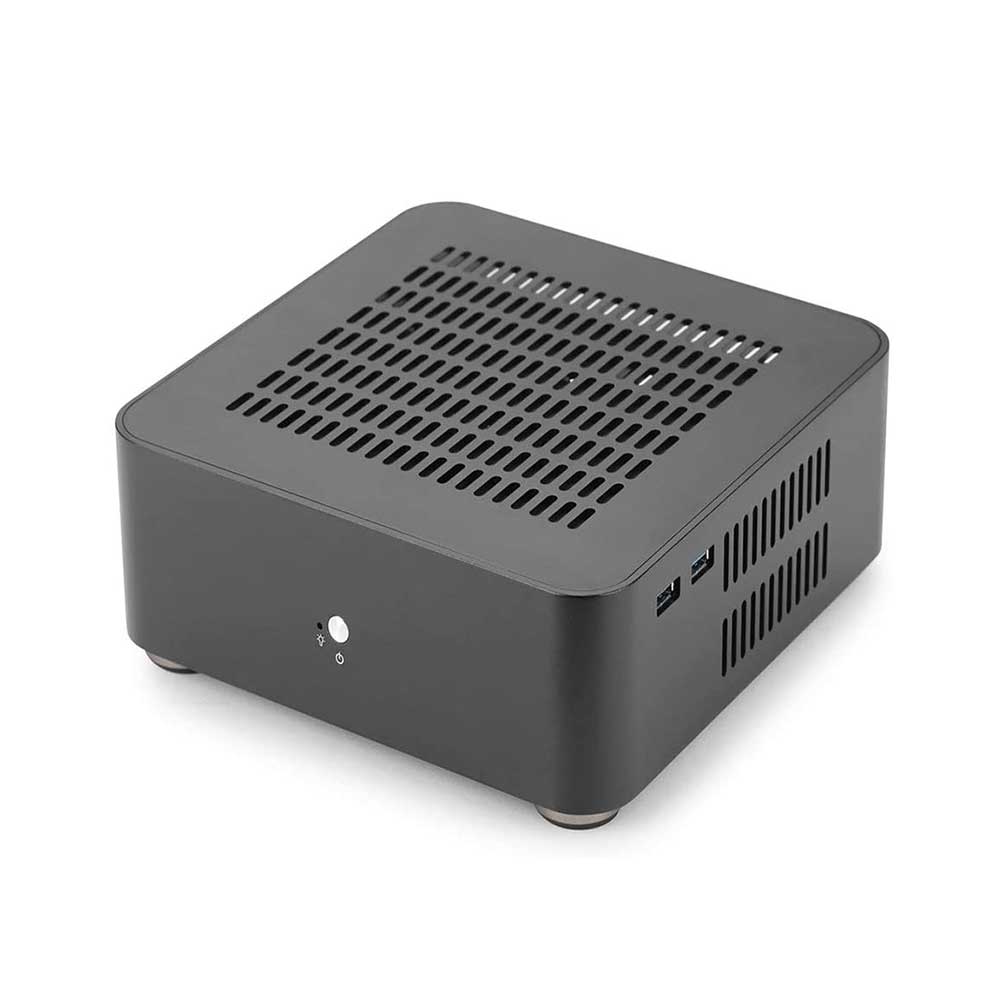 The aforementioned HTPC cases are pretty large. If you’re planning on building a low-profile HTPC without a discrete GPU and powerful CPU, you probably want something pretty and tiny.

Something hardly noticeable in the living room. And the L80S from RGEEK is just that. A tiny HTPC case with support for Mini-ITX motherboards and pico PSUs. All that packed inside a highly attractive design.

The case comes with support for one 5010 fan (basically a small, 50mm brushless case fan), but the majority of the heat will dissipate via cutouts found all over the case. Thermals are pretty solid when using low-powered CPUs with integrated GPUs.

As for the CPU cooler clearance, you can fit coolers lower than 40mm. In other words, you’re okay with running any AMD APU inside this case. When it comes to space for storage drives, you can fit one 3.5” and one 2.5” SSD drive, which is nice to see in a tiny case like this one. 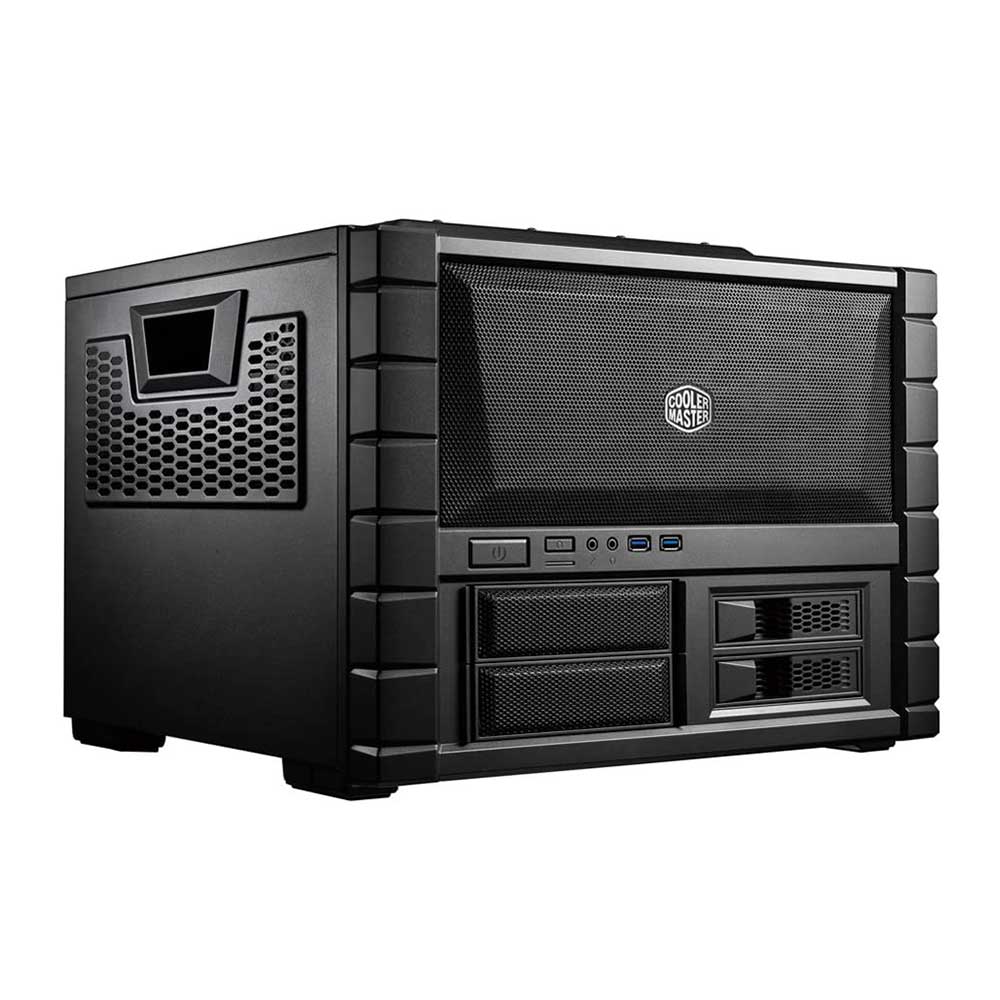 The Cooler Master HAF XB EVO is a thick boy, and while it looks like a box design, it’s actually the best horizontal PC case made for LAN parties. You get pretty handy built-in handles, which are very stable for carrying the case around.

You also get a massive amount of space, turning the process of building a PC inside this case a breeze. There’s room for a 180mm CPU fan and GPUs up to 334mm in length, meaning you don’t have to worry about clearance, GPU thickness, and other issues inherent to most horizontal PC cases.

As for the airflow, it’s great thanks to the chunky design and the huge, 200mm fan mounted on the top. You also get two 120mm front-mounted fans (which can be replaced with 140mm case fans), and space for one optional 120mm case fan on the back.

Finally, there’s also room for a 240mm radiator on the front side, making this a rare horizontal case with AIO support. The HAF XB EVO has enough room for a standard ATX PSU, two 5.25” drives, and four 2.5” or 3.5” drives. Pretty solid but not great, considering the sheer size of this case. 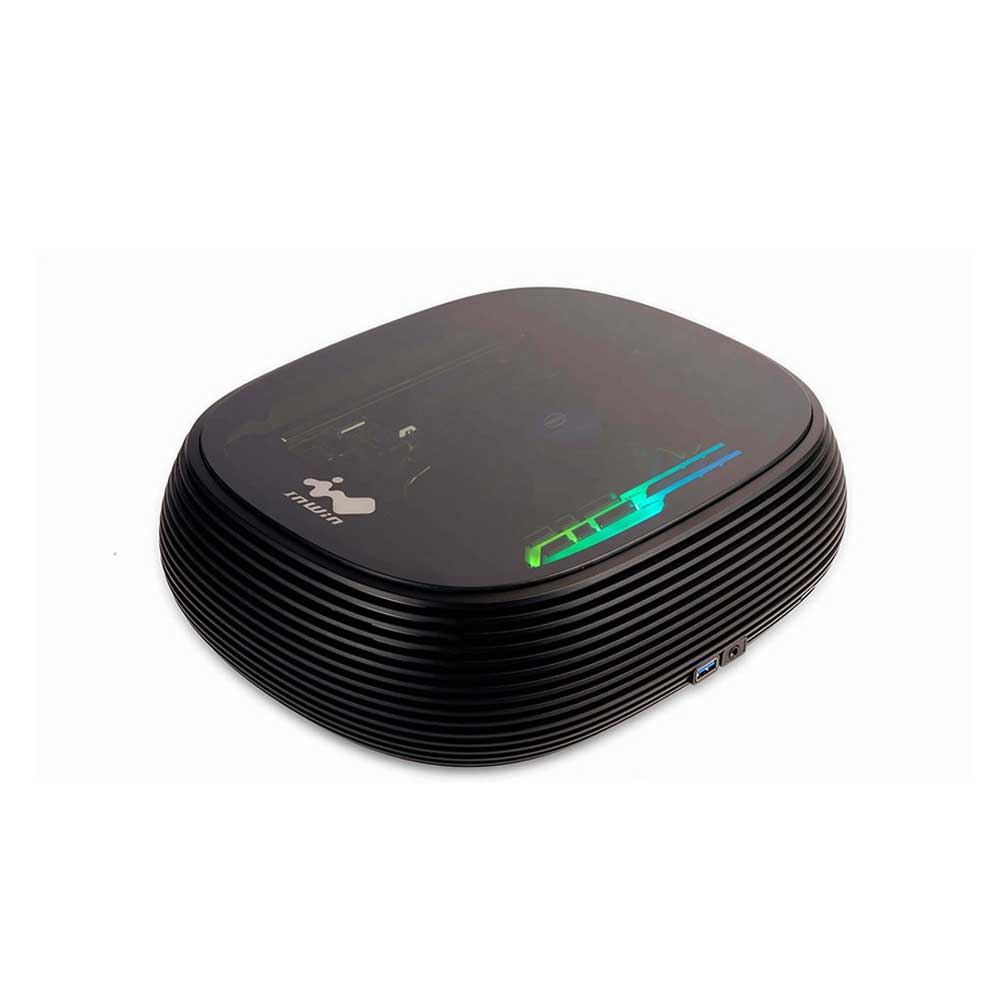 Last but not least, we have by far the best-looking horizontal case on this list. The B1 from InWin is one of the slickest PC housings we’ve ever seen. It’s relatively small, and you can use it both vertically and horizontally.

The good news is that the case has a side-mounted fan, so the airflow won’t suffer when using the case in a horizontal position. That said, the case doesn’t have the greatest thermal performance. We’ve expected this considering the extravagant design sealed from the top by the glass panel.

Because of this, we recommend getting a cooler like the Noctua NH-L9a/NH-L9i, even though the case supports coolers up to 60mm in height in order to have increased airflow around the CPU. As for the GPU, no, you cannot install one, making this case perfect for low-power HTPC systems and not for gaming rigs.

The small, 80mm fan can get a bit louder when under high loads, but at least there’s some form of active cooling. The rear side has a quality dust filter, so you don’t have to worry about the dust limiting already restricted airflow. The case comes with a 200W power supply, another limitation, and another hint that this case isn’t made for gaming systems.

As for the drive bays, there are two 2.5” bays, which is just enough for most HTPC builds. Overall, the B1 is an excellent-looking case with a great price and a 200W PSU included in the price. It can get a bit hot, but when paired with a low-power APU and a quality low-profile fan, it should have pretty decent thermal performance.