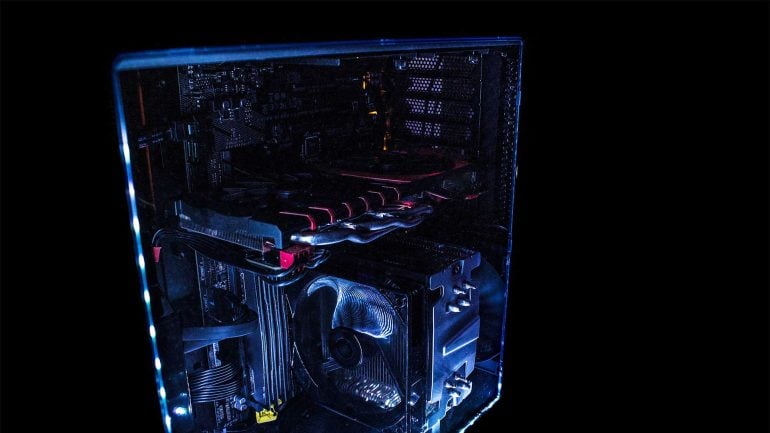 PC cases come in all shapes and sizes. Inverted PC cases include an upside-down internal layout and are meant for people who, for one reason or another, want to place their PC on the left side of the desk. Whether you don’t have enough space on the right side of your desk or want an unconventional setup, an inverted case is the way to go.

And today, we’re going to show you the best inverted PC cases you can get right now. Our list includes mostly ATX cases, but we reserved a spot at the end of the list for a couple of mATX and Mini-ITX picks. Now, most inverted cases come with the inverted layout out of the box, although there are a couple of modular housings that can go both ways. These modular models are quite expensive, and the procedure of swapping their layout can be a pain, especially if you haven’t done anything similar before. You have been warned.

Finally, the inverted PC case market is extremely niche, and the number of choices is highly limited. If you didn’t find your favorite on this list, you could try checking out our other buying guides. Guides such as the best dual system cases or best vertical GPU cases. We also have a list of the best unique PC cases for those looking for ways to make their PC build stand out from the pack. 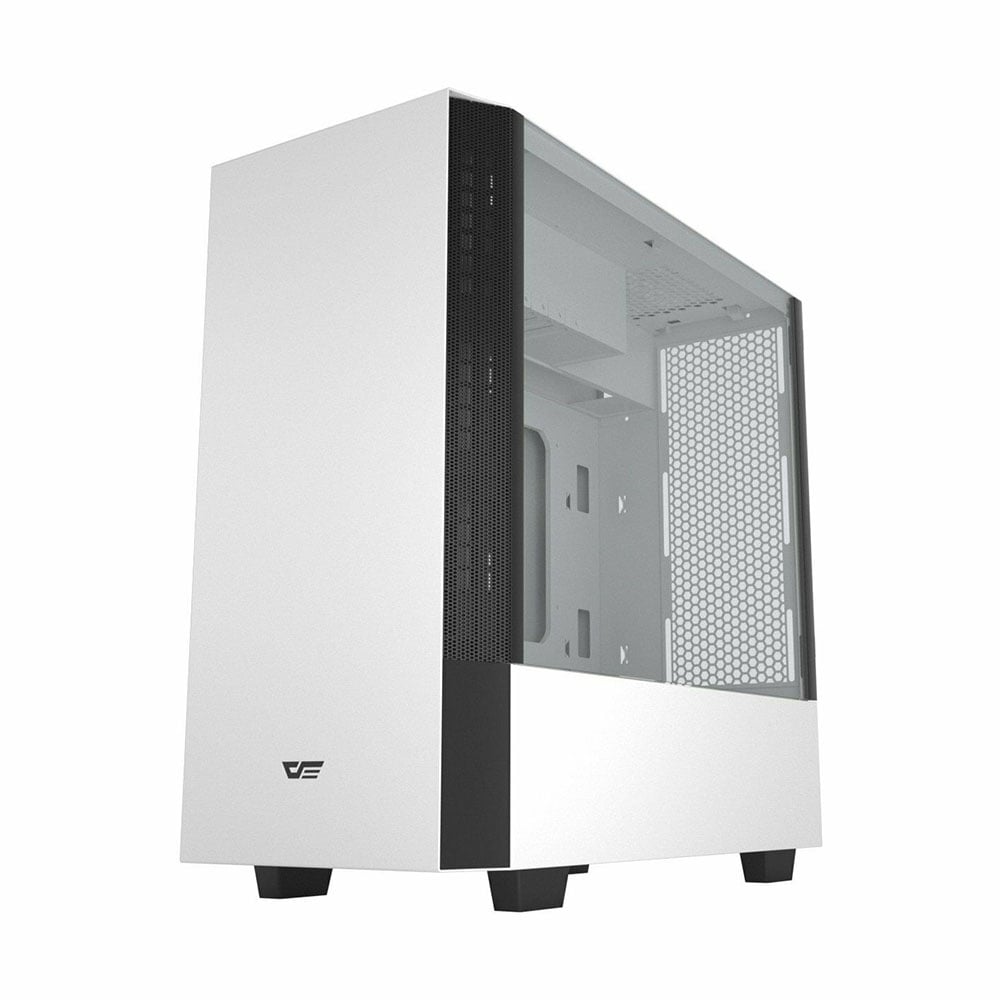 The darkFlash V22 is cheap, and it has an excellent minimalist design (think NZXT H510) that’s all-white. This is our pick for the best inverted PC case for users on a budget. It’s worth noting that, aside from the inverted layout, the housing also features an unusual motherboard layout that puts the GPU vertically, parallel to the front panel.

This looks very cool but also carries a penalty of the rear I/O being placed at the top of the case instead of on the rear side. Luckily, there’s enough space between the I/O and the top cover to use regular cables and not angled ones, which is definitely a plus.

Another plus is the magnetic side panel (this time found on the right side of the case) that can be easily opened and closed and seamlessly removed. The housing features two vents placed on both sides of the front panel that should help with the airflow.

The V22 comes without pre-installed fans, which makes its price not as attractive as other budget cases that do come with one or more case fans. That said, it isn’t like you have a huge selection of budget cases with an inverted layout.

The default thermal performance is below par, so we recommend mounting at least one fan on the back, with the 2+2 (front and back) fan layout being the best solution. The case supports five 120mm fans in total and can also house a 360mm AIO on the front and a 240mm radiator on the back.

Since the V22 features a rotated motherboard layout, you only have 310mm of clearance for your GPU. Not terrible, but less than ideal in this day and age, when monolithic flagship GPUs are the norm. If you want to see some massive GPUs, just look at our list of the best RTX 3090 graphics cards.

On the other hand, the CPU heatsink clearance is 165mm, which is excellent. You also get two dust filters (at the front and on the topside) and an okayish front I/O (two USB 3.0, combo audio jack). Overall, the darkFlash V22 is a pretty solid inverted PC chassis, its biggest strength being the price and sleek design. 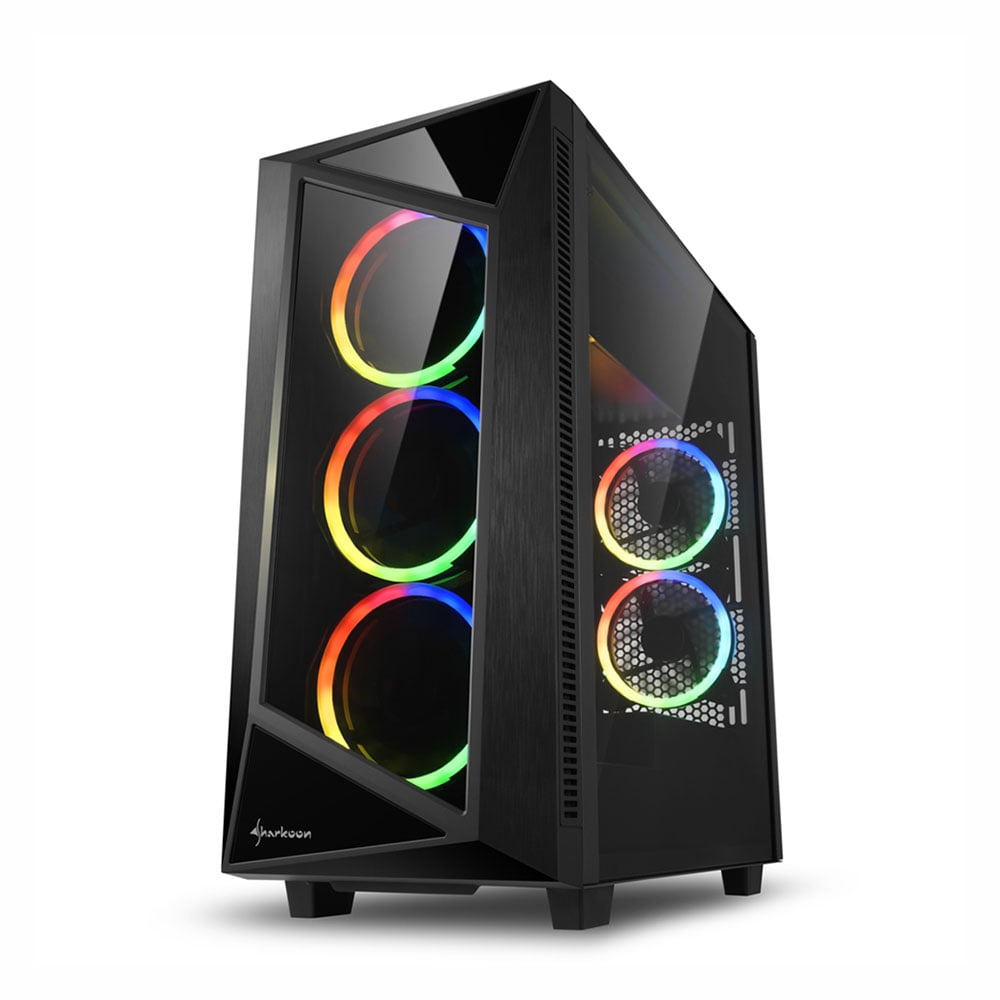 Moving on to our pick for the best RGB inverted PC case, we have the Sharkoon Rev200. This one has a classic RGB design with five RGB case fans in total and a glass front panel. Not great when it comes to the airflow, but at least you get fins on both sides of the front panel that should keep the thermals in check.

The design is solid, with the angled front panel and, again, a rotated motherboard that includes the vertical placement of the GPU. The case supports two 3.5” drives along with four 2.5” drives. An average amount for a mid-tower chassis.

As with the darkFlash V22, the top-mounted I/O has enough space for regular cables, and the internal cable management is realized quite well. Clearance is also better than on the V22. You can install CPU coolers up to 165mm in height and GPUs that are up to 323mm in length. 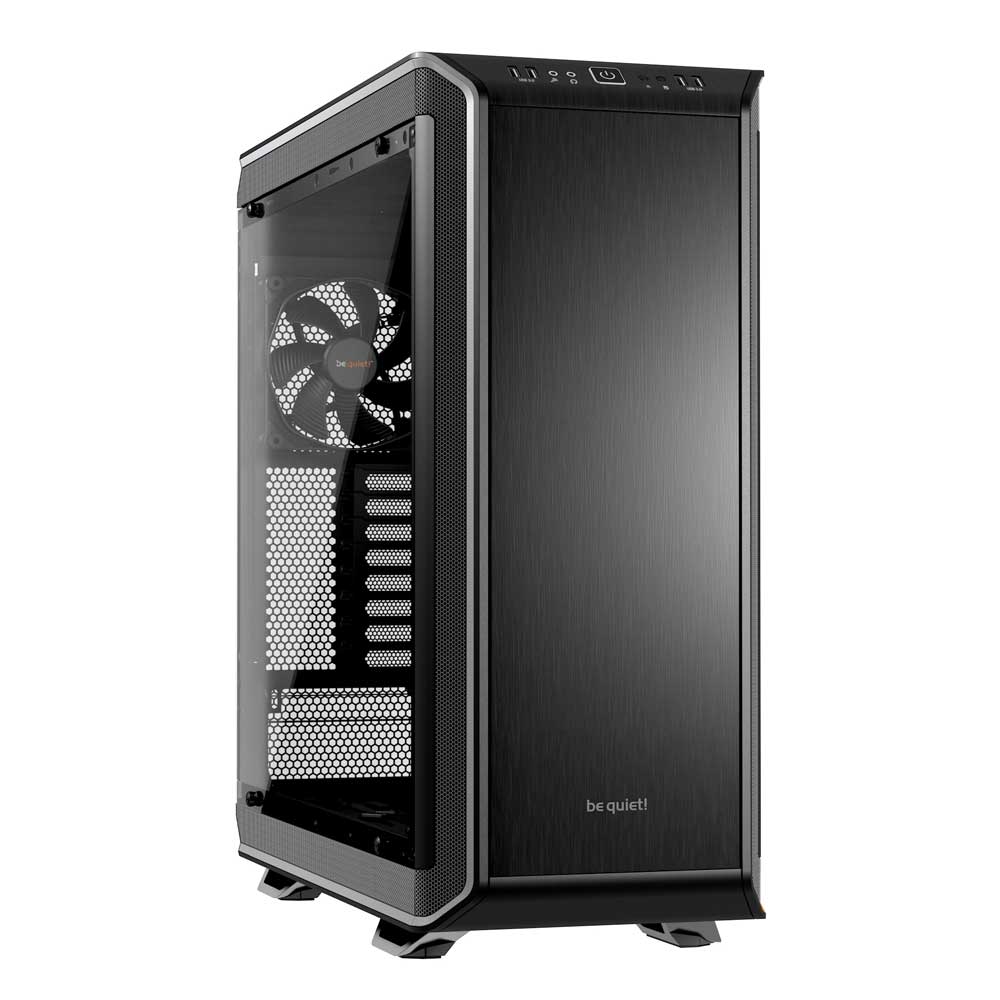 In other words, they come with a regular layout, and you’ll have to put some time and effort into swapping the motherboard tray and the side panels to get the inverted ATX layout. The better choice of the two is the Dark Base Pro 900 Rev. 2 from be quiet!.

This is a superbly built full tower housing with a restrained but still attractive design. The case combines silent paneling and three 140mm performance fans, and the end result includes low thermals but also quite a high noise due to the high RPM fans. Luckily, you can tweak the fan curve and get a quiet case with better-than-average thermals.

The Dark Base Pro 900 supports up to 10 fans. The chassis also comes with a fan controller with PWM support, which is great to have in a case as huge as the Dark Base Pro 900. As for the front panel I/O, you get two USB 3.2 gen1 ports, one USB-C port, and a combo audio jack. Finally, this chassis also comes with a Qi wireless charger, which is a neat extra. 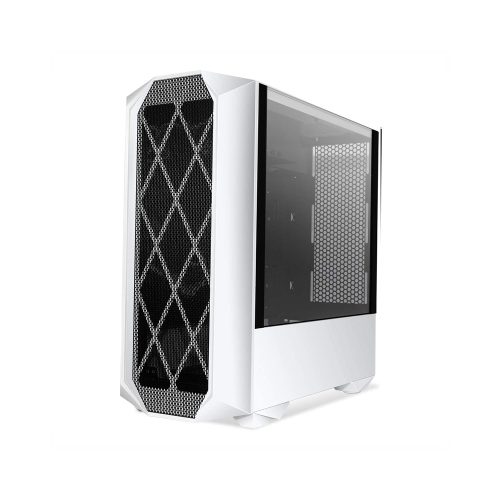 Now, both the darkFlash V22 and the Sharkoon Rev200 feature vertical GPU mounts, but our vote goes to the Segotep Typhon, thanks to its mesh front panel. This means excellent airflow and pretty cool aesthetics, thanks to the white design.

As is the case with other chassis featuring a rotated motherboard tray, there’s a compartment on the top for cable management. The case includes space for two 3.5” and two 2.5” drives, which isn’t that much but should be enough in the age of M.2 SSDs.

Aside from the three front fans, the Argus has room for two 120mm case fans on the back, and that’s pretty much it when it comes to the fan support. Clearance is solid, but it can be too limiting for flagship GPUs since you can install cards up to 320mm in length. CPU cooler support is better, with enough space for up to 167mm tall CPU heatsinks.

The chassis can host one 360mm AIO on the front and one 240mm radiator on the rear side, is quite roomy to build inside, and it features surprisingly good internal cable management. We also like the front panel since it includes two USB 3.0 ports, power and reset buttons and a combo audio jack. Overall, an excellent vertical GPU case with an inverted layout. 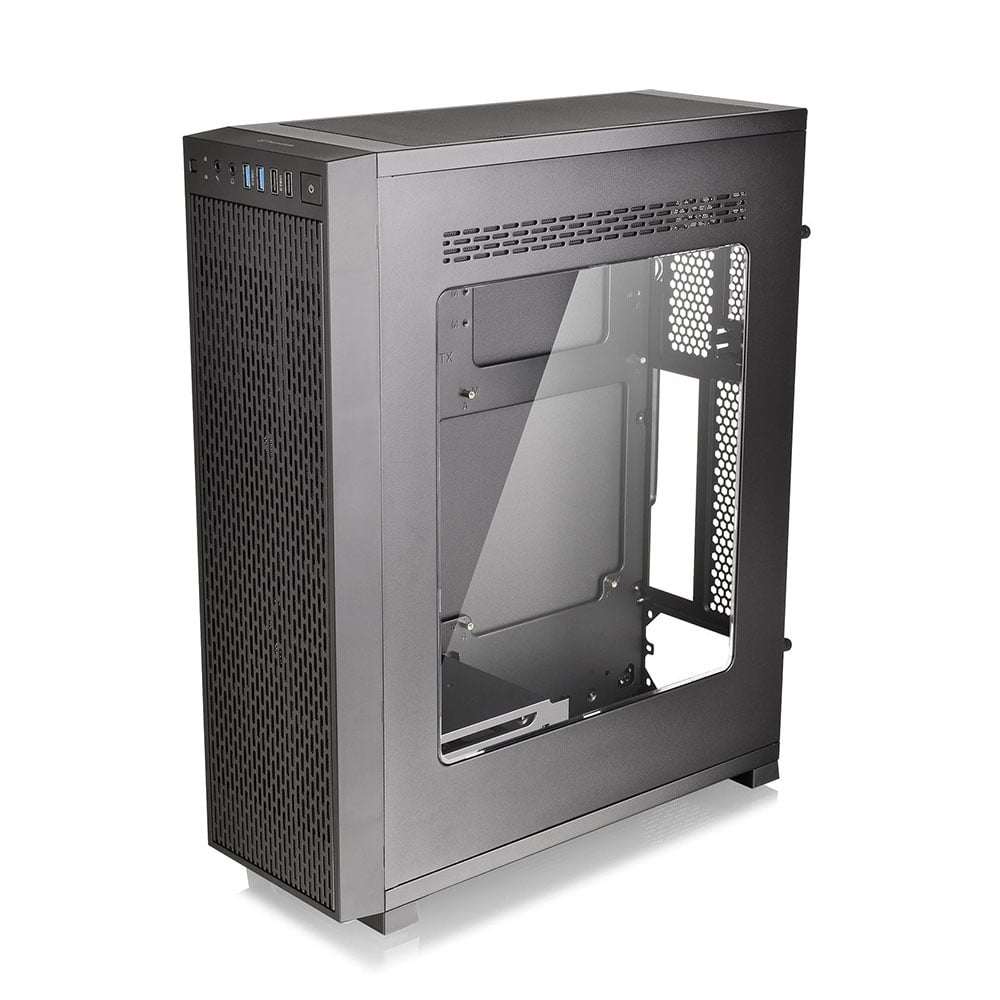 The Core G3 from Thermaltake is a very unusual design. It features an extremely slim inverted profile and requires an SFX power supply. If you’re looking for an SFX PSU, we have a list of the best SFX power supplies you can check out.

Despite its lean frame, the Core G3 supports full ATX motherboards. Finally, you get a vertical GPU mount. Oh yeah, and you can also use the case in both vertical and horizontal layouts, which is a nice bonus.

The case features a mesh front panel, along with lots of ventilation on the top and rear. This is great because the slim frame combined with a vertical GPU mount could likely result in higher than average GPU thermals.

Putting holes on all sides should keep the GPU thermals under check. As for the clearance, you can fit a GPU up to 310mm in length and a 110mm tall CPU cooler.

Considering the slim design, vertical GPU mount, and less than ideal CPU cooler clearance, we would recommend going custom loop, but the thing is, the Core G3 supports only a single 240mm radiator.

This should be enough for a mid-range CPU combined with a high-end GPU, but you could have thermal issues if you combine something like the 10900K or the 11900K with the RTX 3090.

If you do want to build an air-cooled system, do know that the G3 has space just for two front-mounted case fans. Finally, the G3 can house either two 3.5” drives or two 2.5” drives. Overall, highly attractive, with ATX support, but also with questionable thermal performance. 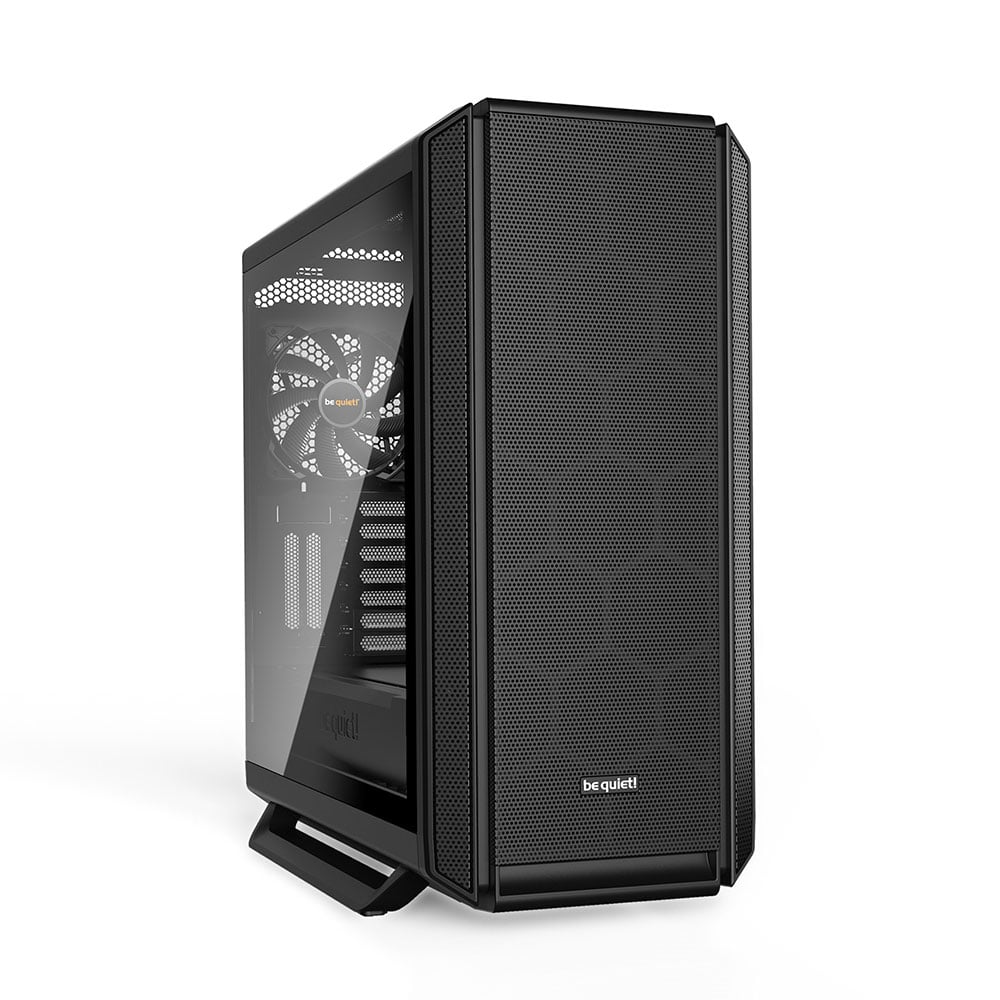 If you want a modular inverted ATX case, there are a couple of full-tower models in the form of the be quiet! Dark Base Pro 900 and the Cooler Master Cosmos. But if the full tower’s too big for you, the best modular inverted PC case is the Silent Base 802 from be quiet!

Now, this is one original chassis. It comes with a modular design that includes a removable motherboard tray and two front-panel choices. One for silent operation and a mesh one for high airflow.

While the mesh front panel offers much better airflow and thermals, putting the silent paneling won’t turn the insides into a sauna. You also have two top covers, one for silence and the other for airflow. Overall, the case looks great no matter which front panel option you opt for.

The Silent Base 802 comes with three pre-installed Pure Wings 2 fans, which have pretty solid performance and. If you want more, you can install up to seven case fans in total.

Water cooling support is excellent. The Silent Base 802 can house up to one 420mm radiator on the front, in combination with up to a 360mm on the top and a 140mm AIO on the back.

As for the clearance, you can install a 185mm tall CPU heatsink and a GPU that’s up to 432mm in length (287mm if you keep the HDD cage). Finally, you can fit up to 22 storage drives inside the case, making it a perfect choice for a NAS build.

Overall, the Silent Base 802 is an exceptional case with a highly modular design, lots of insulation that won’t affect thermals if you go with the mesh panel, and superb build quality, notwithstanding the mesh top cover with glued magnetic strips that could peel off rather easily. 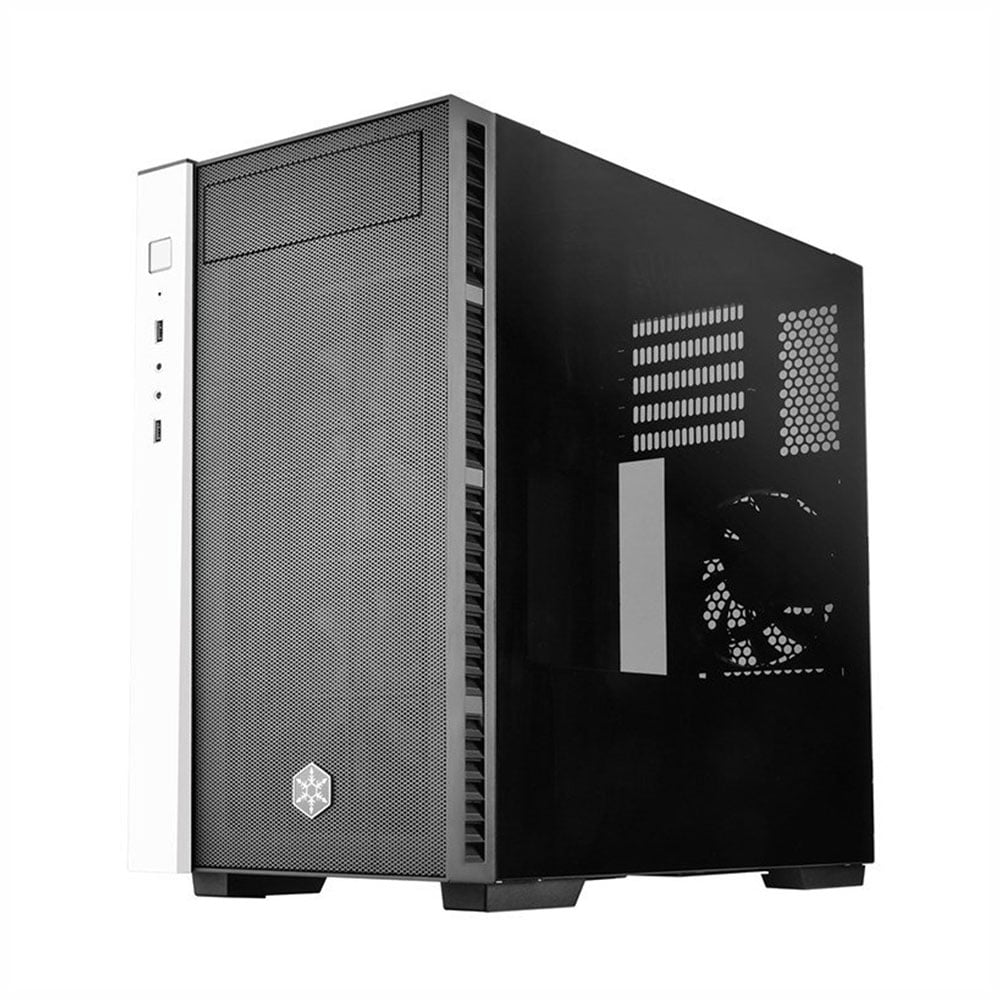 Last but not least, we have a couple of picks for users who want smaller, portable cases that come with an inverted internal layout. The first option is the RL08 from Silverstone, the best inverted Micro ATX case you can get.

The housing has great airflow thanks to the mesh front panel. It features both inverted and upside down internal layout, it looks very attractive, and it comes with two preinstalled RGB fans on the front. 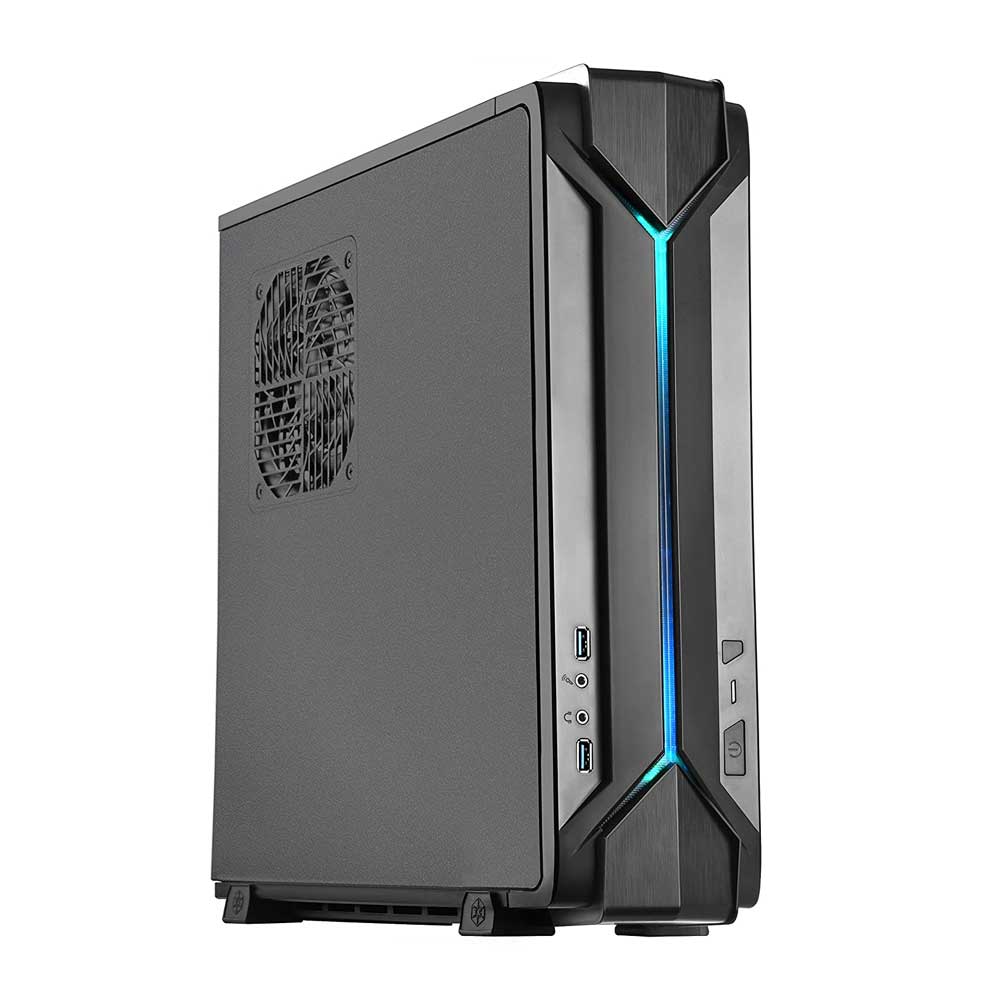 Finally, we have the best inverted ITX PC case. Now, the RVZ03 from SilverStone doesn’t come with an inverted layout, but the design allows owners to place it either on the left or right side of the table.

The case has surprisingly good thermals, but the internal layout isn’t very build-friendly. Further, the chassis comes with a separate GPU chamber connected to the board via a riser card that’s PCIe 3.0. In other words, if you have a PCIe 4.0 GPU, you could run into all kinds of issues.

As for the clearance, the case supports graphics cards up to 330mm long and CPU heatsinks that don’t exceed 83mm. The cooling system includes two pre-installed 120mm fans (one on the top and one on the button) along with space for a third fan. The RVZ03 is also available with an ARGB LED strip and in white.