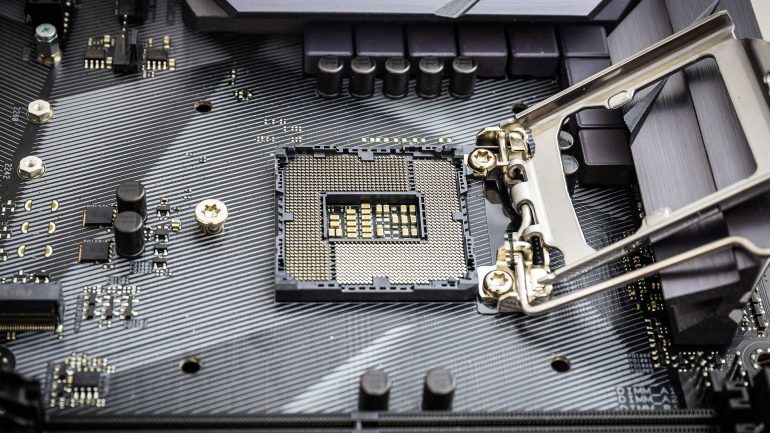 The most exciting CPU from the 10th gen Core lineup is the Core i5-10600K. This 6-core/12-thread CPU is in the sweet spot for many gamers. It’s still a pretty solid choice for games. The 10600K costs less than the newly-released Ryzen 5 5600X, and it can be paired with pretty much every Z490 board out there. If you want to find out more about Z490 boards or motherboards in general, do visit our motherboards page.

Overall, the 10600K is a pretty solid bang for the buck gaming CPU. It’s simple to overclock and can net you enough extra power to match the 10900K, which isn’t a bad result for the price. Once you decide to go for the 10600K, you’ll also need a solid Z490 board to go with the CPU. Want to find the best motherboards for i5-10600K? Read on.

Those interested in the best motherboards for the 10600K could also visit our list of the best CPU coolers for i5-10600K. And if you have this CPU and are looking for a new GPU, check out our best graphics cards for i5-10600K and best RTX 3070 aftermarket cards articles. 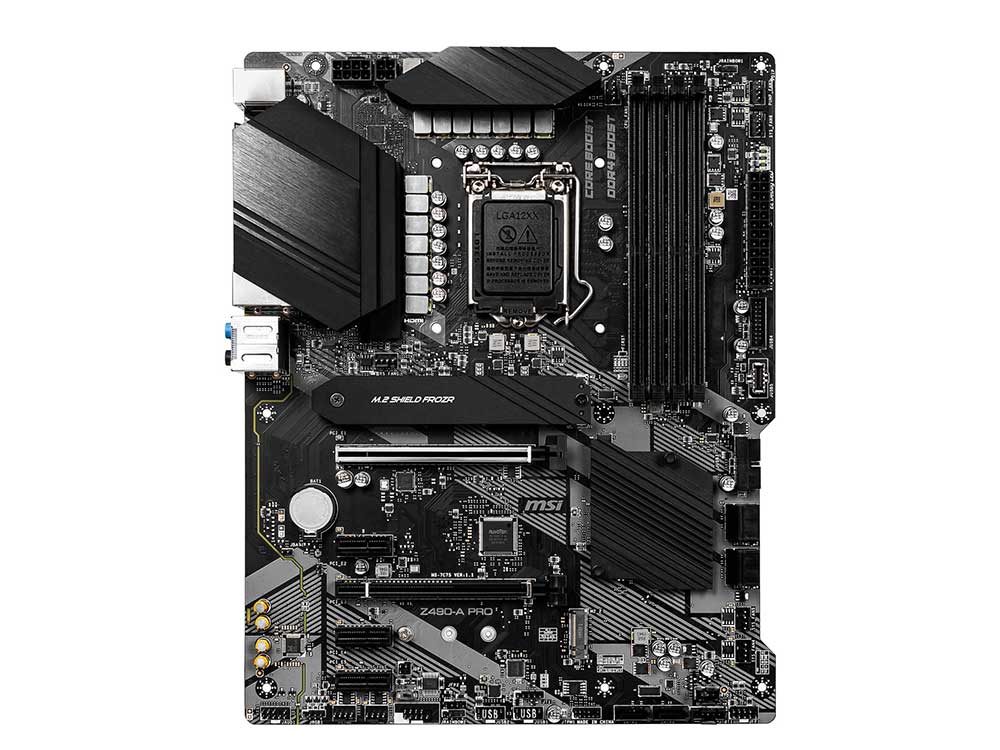 The MSI Z490-A Pro is the best value board for the 10600K. This is one of the cheapest Z490 motherboards yet it packs a pretty solid punch. The most important part, the VRM, is great for the price. The board can run the 10900K at 5Ghz without any throttling taking place, so it shouldn’t have any issues running an overclocked 10600K.

The issue, for some users, could be the limited set of features on this board. Affordable price had to mean either lower quality VRM or fewer features. MSI, luckily, has picked the latter. Feature list of this board is surprisingly positive. You get support for up to 4800MHz DDR4 memory, two M.2 slots, and six SATA III ports.

Dual PCIe x16 slots (but only PCIe 3.0 since the current generation of Intel CPU doesn’t support PCIe 4.0) and three PCIe x1 slots. You also get 2.5Gb LAN and a solid audio section, both made by Realtek. But at the back, there are just a couple of fast USB 3.2 ports along with a couple of video outs, and that’s pretty much it. Also, don’t expect stuff like BIOS flashback, troubleshooting LEDs, dual BIOS, or POST code. 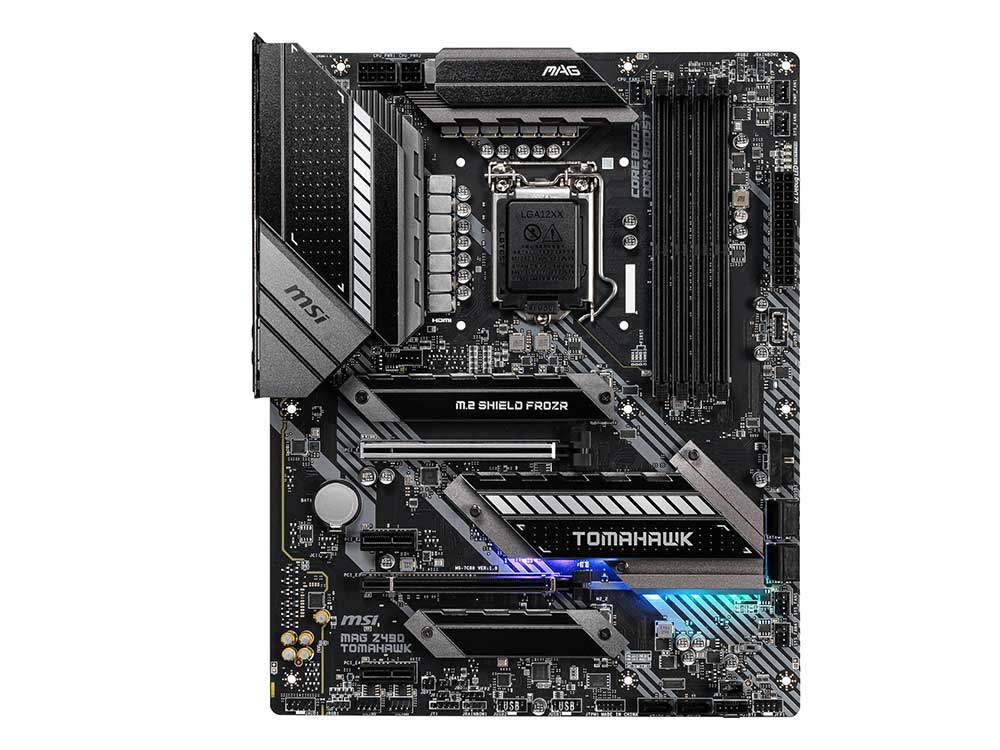 The MSI MAG Z490 Tomahawk is the sweet spot for users who want to overclock their 10600K without needing a wide range of features. It’s our pick for the best mid-range mobo for the Core i5-10600K; no questions about that.

The VRM on this board is excellent, good enough to run even the 10900K over 5GHz without issues. The board also has a pretty good-looking rear end, with lots of USB 3.2 ports and dual gigabit LAN (1Gb + 2.5Gb).

You also get support for up to 4800 MT/s DDR4 memory, two M.2 slots, and six SATA III ports. The board comes with two PCIe x16 slots, but it doesn’t support SLI, only Crossfire. There are also two PCIe x1 slots for expansion cards. The audio section, powered by the Realtek ALC1200-VD1, is excellent for the price.

You won’t get advanced OC features, but they aren’t needed except if you want to push both your CPU and memory to their ultimate limits. Finally, the board looks rather nice. The unobtrusive design is highlighted by large heatsinks, with both M.2 slots getting one. There are also a couple of subtle RGB effects that should look great in the dark. 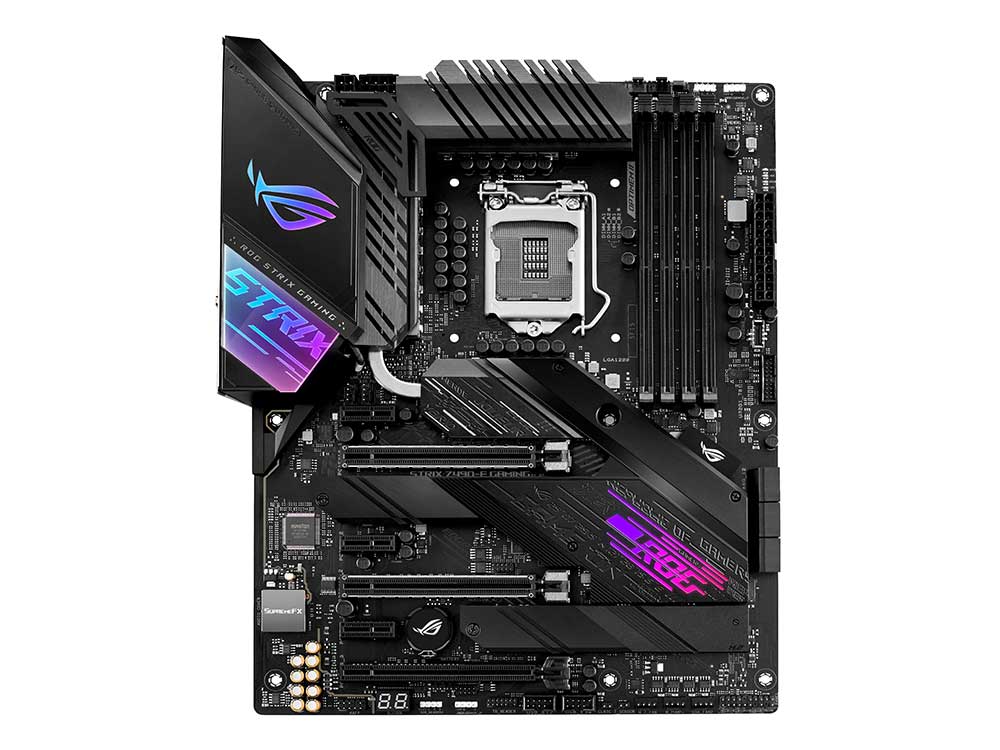 If you want to explore the boundaries of the extreme 10600K overclock, get this board. The ASUS ROG Strix Z490-E Gaming is packed with OC-friendly features such as POST code, excellent passive cooling, troubleshooting LEDs, BIOS flashback, and a superb VRM unit. If we had to pick the best high-end board for the 10600K, this would be our choice.

As for the rest of the specs, memory support goes up to 4800 MT/s DDR4. There are two M.2 slots and six SATA III Ports. The board comes with three PCIe x16 slots, and it supports both Crossfire and SLI. There are also three PCIe x1 slots.

At the rear end, you’ll find 2.5Gb LAN, Wi-Fi 6 and Bluetooth 5.1 connectivity, a bunch of USB 3.2 ports, BIOS flashback button, and also four USB 2.0 ports, if someone still needs those. The audio section is powered by ASUS’ proprietary audio codec, and it’s excellent. This is a complete product for those in need of advanced features. 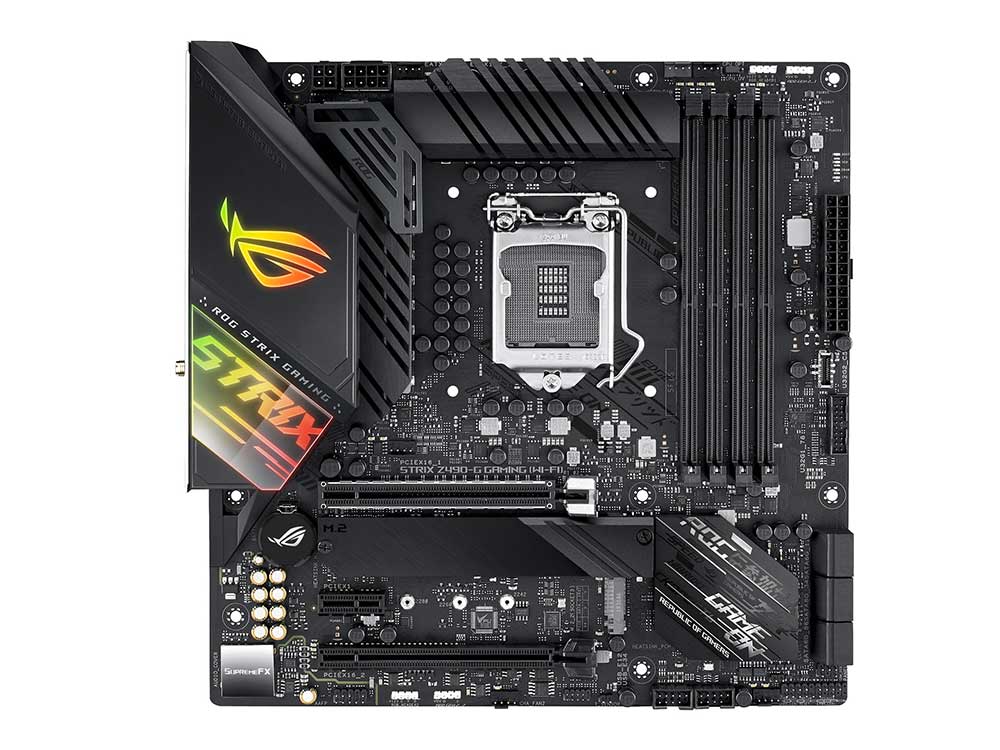 Next, this board’s small but packed. The usual support for up to 4800 MT/s DDR4 memory is here, as are two M.2 slots (nice to see on an mATX board). You also get 6 SATA III ports and two PCIe x16 ports with support for Crossfire. The board features 2.5Gb LAN along with Wi-Fi 6 and Bluetooth 5.1 connectivity.

There are some OC-friendly features such as colored troubleshooting LEDs and BIOS flashback. The rear panel hosts six USB 3.2 ports along with a couple of video outs and two USB 2.0 ports. The audio section is the same as on the ASUS ROG Strix Z490-E. Overall, this is a near-perfect mATX board that will satisfy anyone. 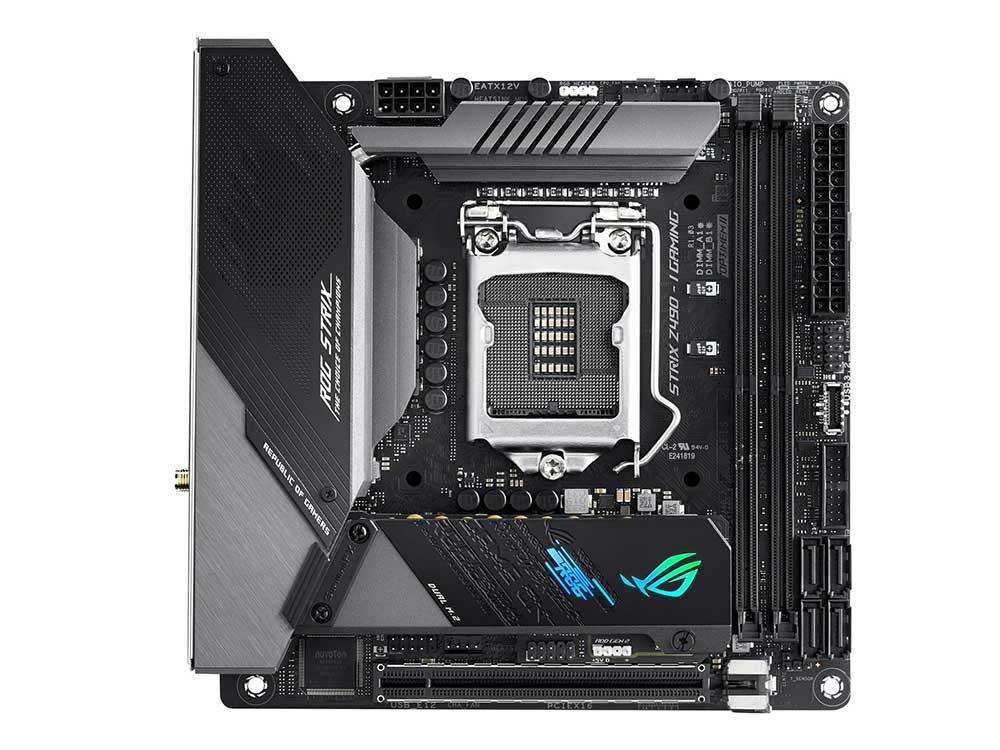 Last but not least, we have the best Mini-ITX board for the 10600K. Now, ASUS ROG Strix Z490-I Gaming is expensive, but it’s worth the price. First of all, the VRM is pretty good for a Mini-ITX board.

Next, the board supports DDR4 memory up to 4800 MT/s. It also comes with dual M.2 slots and four SATA III ports. A usual set of storage options for a high-end Mini-ITX board.

The ASUS ROG Strix Z490-I Gaming comes with a single PCIe x16 slot, a Wi-Fi 6 card, and Bluetooth 5.1 connectivity. The audio section is the same one that’s found on all high-end boards from ASUS. In other words, it’s great.

The board features 2.5Gb LAN along with some nice features such as different colored troubleshooting LEDs and BIOS flashback. Finally, the rear panel is richly populated for a Mini-ITX board. There are four USB 3.2 ports, two USB 3.1, and two USB 2.0 ports.

Design-wise, the ROG Strix Z490-I Gaming looks slick and monolithic despite its humble size. The rear panel armor looks like it’s fused with heatsinks. The two turn the board into a seriously thick boy.

You can create a powerful SFF build inside an M-ITX case with a slightly overclocked 10600K with this one. Looking for an ITX case? You should read our list of the best Mini-ITX cases.

First of all, this is the cheapest unlocked processor from Intel right now. The company decided to launch the i3 series without a K model. On top of that, the Core i5-10600K shows incredible gaming performance when overclocked. Run it stable at around 5GHz, and you’ll be able to reach 10900K levels of gaming performance for much less cash.

The great news is that the 10600K is very easy to overclock since it runs much cooler than its bigger cousins, the 10700K and the 10900K. Pair it with a solid AIO or a quality air cooler and, you’ll be able to reach 5GHz.

The best thing of all is that you don’t need an expensive board to reach 5GHz. Even some budget Z490 boards have VRMs good enough to sustain the Core i9-10900K at 5GHz. Running an OCed 10600K wouldn’t be the slightest problem for those boards.

Finally, the CPU’s six-core design might look like a limiting factor for some users, especially regarding performance with next-gen games. But considering the performance per core and the fact that consoles reserve one core for the OS, it looks like a powerful 6-core and 12-thread CPU, like the 10600K, will be a great choice for upcoming games.

That said, the 5600X is a better buy. Better gaming and productivity performance, box cooler that comes with the CPU (and less demanding CPU to cool in case you opt for an aftermarket cooler), compatibility with even the cheapest B550 and X570 boards, and the ability to reach 10900K gaming performance without overclocking. If you want to get a new gaming CPU in the 10600K’s price range, get the 5600X instead. But if you’ve already got the 10600K, don’t worry since this is a pretty powerful gaming CPU.