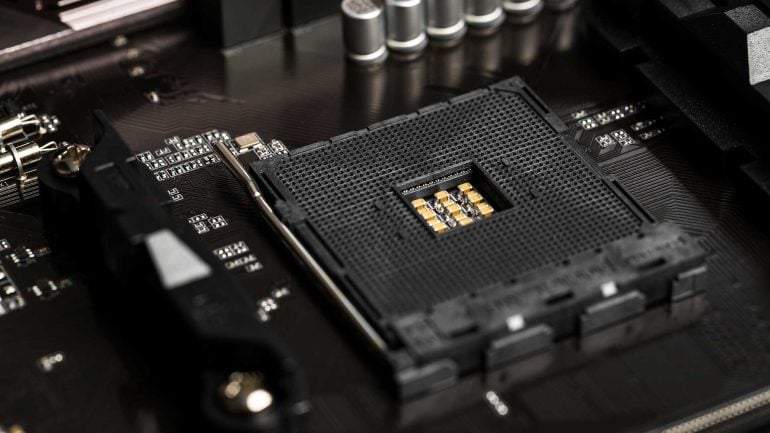 The Ryzen 5 3600XT, Ryzen 7 3800XT, and the Ryzen 9 3900XT feature increased clock speeds over the base 3000X models. This translates into about a 5 percent increase in performance. The Ryzen 7 3800XT is in the middle of the 3000XT series, packing eight cores and sixteen threads. Being a 105W Ryzen part, the 3800XT needs a quality AM4 board to work as intended. If you’re interested in Intel motherboards, visit our motherboards section. It features dozens of motherboard buying guides for Intel CPUs.

Now, before we present our first pick, we want to recommend a couple of buying guides that might interest every 3800XT owner. First of all, read our list featuring the best air cooler for Ryzen CPUs to find a proper cooling solution for this CPU. If you’re in the market for a new GPU, do check our guide for the best aftermarket RTX 3070 cards. Last but not least, our guide for the best B550 motherboards can give you extra choices when it comes to the best motherboard for the 3800XT. 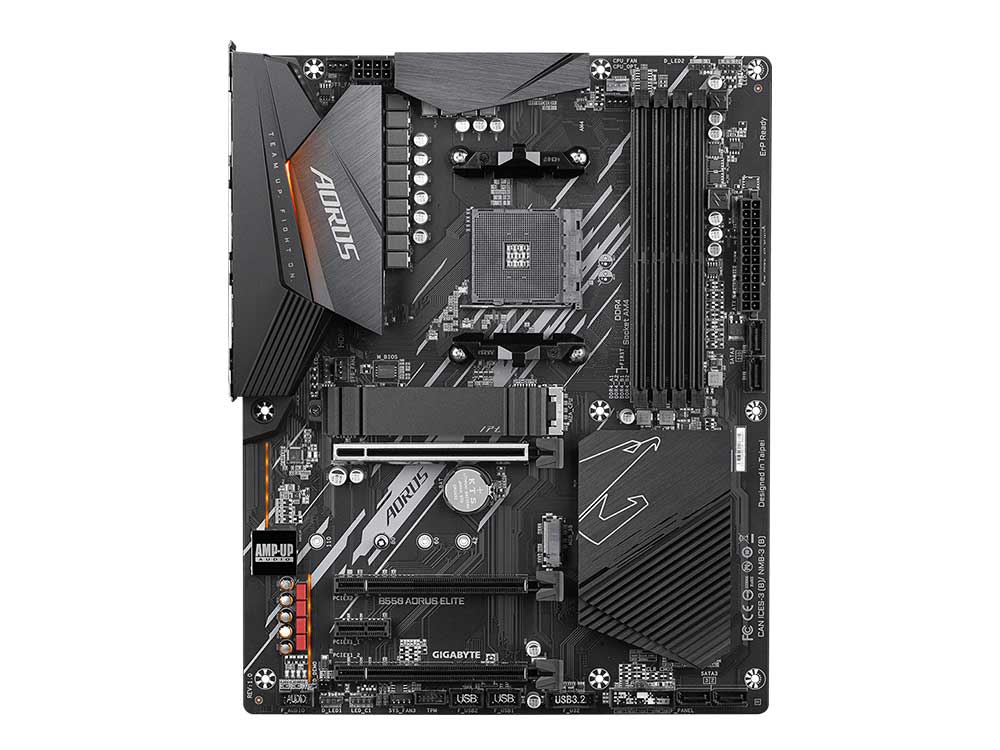 The Gigabyte B550 Aorus Elite isn’t the cheapest B550 board at the moment. The thing is, cheaper models could have issues with running the 3800XT due to their less-than-ideal VRMs. This is the reason for choosing this model as the best budget motherboard for the Ryzen 7 3800XT.

If you want to get a board that will have no issues running the 3800XT, even overclocked, get this one. Its VRM section is good enough for you to push the 3800XT to its absolute limits. When it comes to other features, the Gigabyte B550 Aorus Elite supports fast, 4733 MT/s, DDR4 memory.

Connectivity options include a 2.5Gb LAN port. The board also has a pretty solid audio section, powered by the Realtek ALC1200 audio codec. It houses six USB 3.2 ports on the rear panel, which is excellent for such an affordable motherboard.

When it comes to SATA ports, the B550 Aorus Elite has only four of those. You’ve also got two M.2 slots (one PCIe 4.0 and the other being PCIe 3.0). Expansion slots include three PCIe x16 ports in total, but only one is a full-fledged PCIe 4.0 port that words at x16 speed. The other two are PCIe 3.0 slots working at x2 and x1 speeds. Also, the board includes one PCIe x1 port. 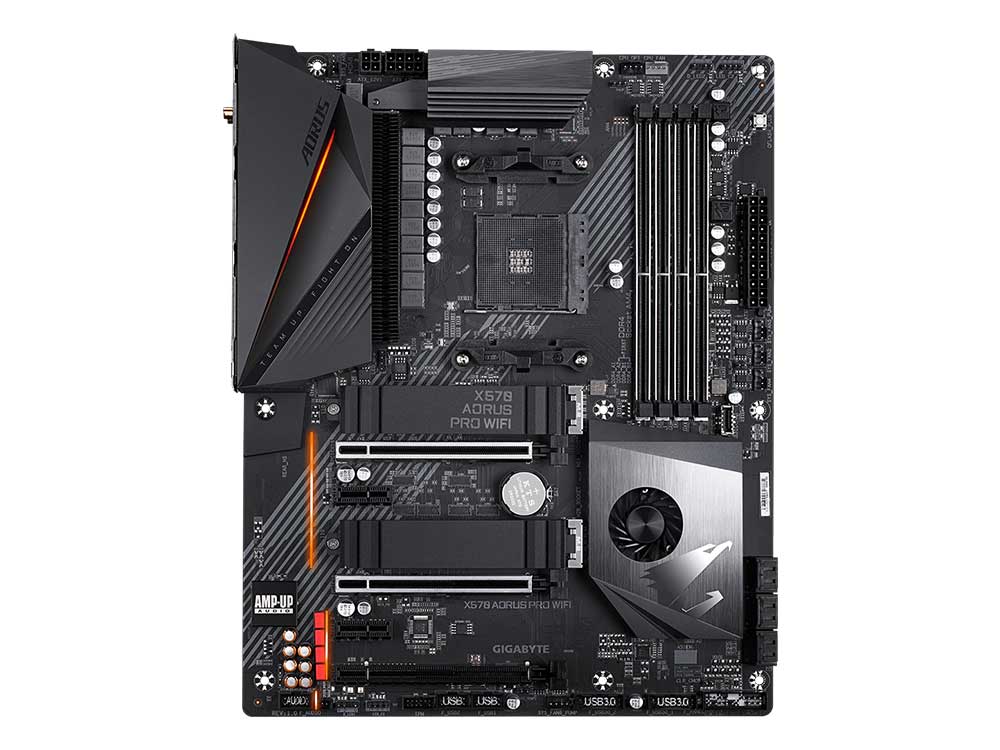 If you’re looking for an X570 or B550 board to pair with the 3800XT, the mid-range market offers by far the biggest selection of quality choices. The best mid-range motherboard for the 3800XT is the Gigabyte B550 Aorus Pro. This is a relatively affordable B550 model that packs an excellent VRM solution.

The board can run DDR4 memory up to 4733 MT/s. Realistically you probably won’t run anything faster than 3600MHz, so when it comes to memory speed support, the Gigabyte B550 Aorus Pro is excellent.

Storage-wise you’ve got two M.2 slots along with six SATA III slots. Next, the board packs three PCIe x16 slots. You get one slot working at x16, with the other two working in x4 and x2 modes. Other expansion slots include two x1 slots.

When it comes to audio, we’ve got a pretty good audio section powered by the Realtek ALC1220-VB audio codec. The B550 Aorus Pro features a 2.5Gb LAN chip. The rear panel is richly populated on this model. You get multiple USB 10Gbps ports, one USB-C port, as well as a selection of audio jacks. Another bonus is the BIOS flashback button found on the rear panel. 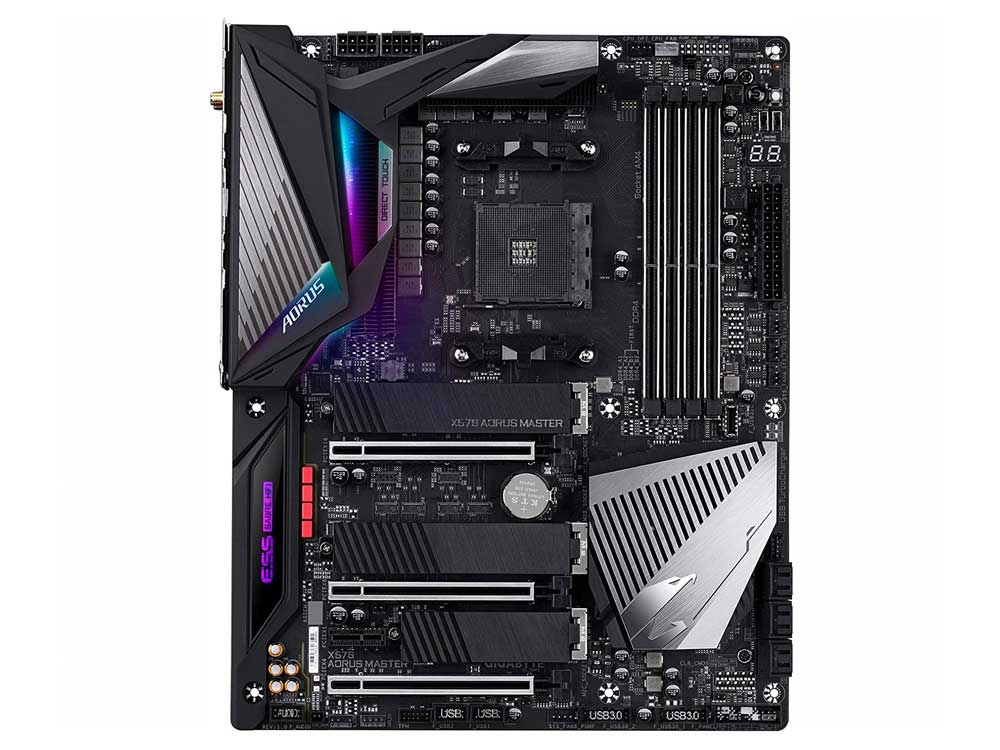 The high-end market also has lots of quality boards. Our pick for the best high-end motherboard for the R7 3800XT is great because it packs a superb VRM, has lots of extra features, and is great for overclocking the 3800XT.

The Gigabyte X570 Aorus Master supports DDR4 memory up to 4400 MT/s DDR4. Storage-wise, the board packs three M.2 slots and six SATA III ports. You’ve also got three PCIe 4.0 slots, out of which one works at x16, one at x8, and one at x4. There’s also one x1 slot along with support for both SLI and Crossfire.

The board features dual gigabit LAN (1Gb + 2.5Gb) along with Wi-Fi 6 network card that also includes Bluetooth 5 connectivity. The rear panel includes six USB 3.2 ports along with some USB 2.0 ports and one USB-C Port.

The board also has lots of features aimed at overclockers. There’s the usual BIOS flash button on the rear panel. And on the front of the board, you can find the POST code along with debug LEDs. Overall, this is probably the best overall 3800XT motherboard that doesn’t cost a small fortune. 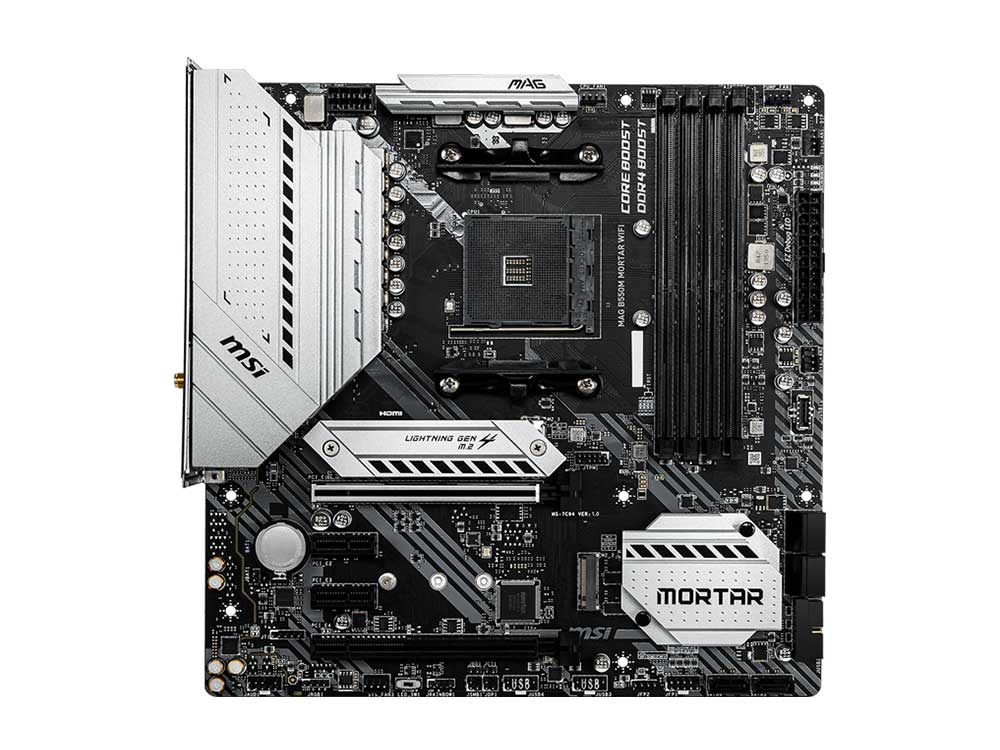 While the new B550 chipset doesn’t include a phenomenal mATX board, like the ASUS ROG Strix Z490-G Gaming we have for the 10th gen Intel CPUs, the MSI B550M Mortar is a pretty good mATX board. It features excellent VRM that can deal with every Ryzen CPU along with a nice set of features for an mATX motherboard.

Connectivity options include 2.5Gb LAN ports along with Intel Wi-Fi 6 chip that also includes Bluetooth 5.1 connectivity. The rear panel is populated by four USB 3.2 ports, one of which is USB-C, along with a selection of audio jacks and a BIOS flashback button. The board also includes debug LEDs and a solid audio section based on the Realtek ALC1200 codec. Overall, a great package for the price.

Unlike the situation with mATX boards, the Mini-ITX market for Ryzen CPUs has lots of quality choices. Our choice for the best ITX board for the 3800XT is the B550I Aorus Pro from Gigabyte. This is a perfect motherboard for any SFF build. If you need a compact case to go with it, check out our list of the best Mini-ITX cases.

This is an excellent little board that has everything you need out of a compact motherboard. You get support for fast memory – up to 5300 MT/s, to be precise. The VRM is also amazing for an ITX form factor. You won’t get better VRMs even on X570 models since they all feature pretty much the same VRMs.

Storage options include two M.2 slots along with four SATA III ports. Connectivity-wise, there’s the 2.5Gb LAN chip along with Wi-Fi 6 and Bluetooth 5. You also get a single PCIe x16 slot, which is a regular thing on Mini-ITX boards. Finally, the Gigabyte model comes with six USB 3.2 ports on the rear panel, which is a lot for such a compact motherboard.

The Ryzen 7 3800XT processor has an excellent performance in most productivity apps, and it’s a pretty solid choice for gaming. The main issue is that this CPU is simply too damn expensive. There are a bunch of better CPUs out there you should focus on instead.

For instance, if you want one of the best gaming CPUs at the moment for less cash, there’s the 5600X. On the other hand, you can get the 5800X, which sells for less than twenty percent higher price. If you’re only interested in productivity workloads and are satisfied with the 3800XT-like performance, get the 3700X instead.

It’s cheaper and has almost the same performance in both games and productivity benchmarks. The 3800XT is only worth it in case you stumble upon a killer deal on the used market.