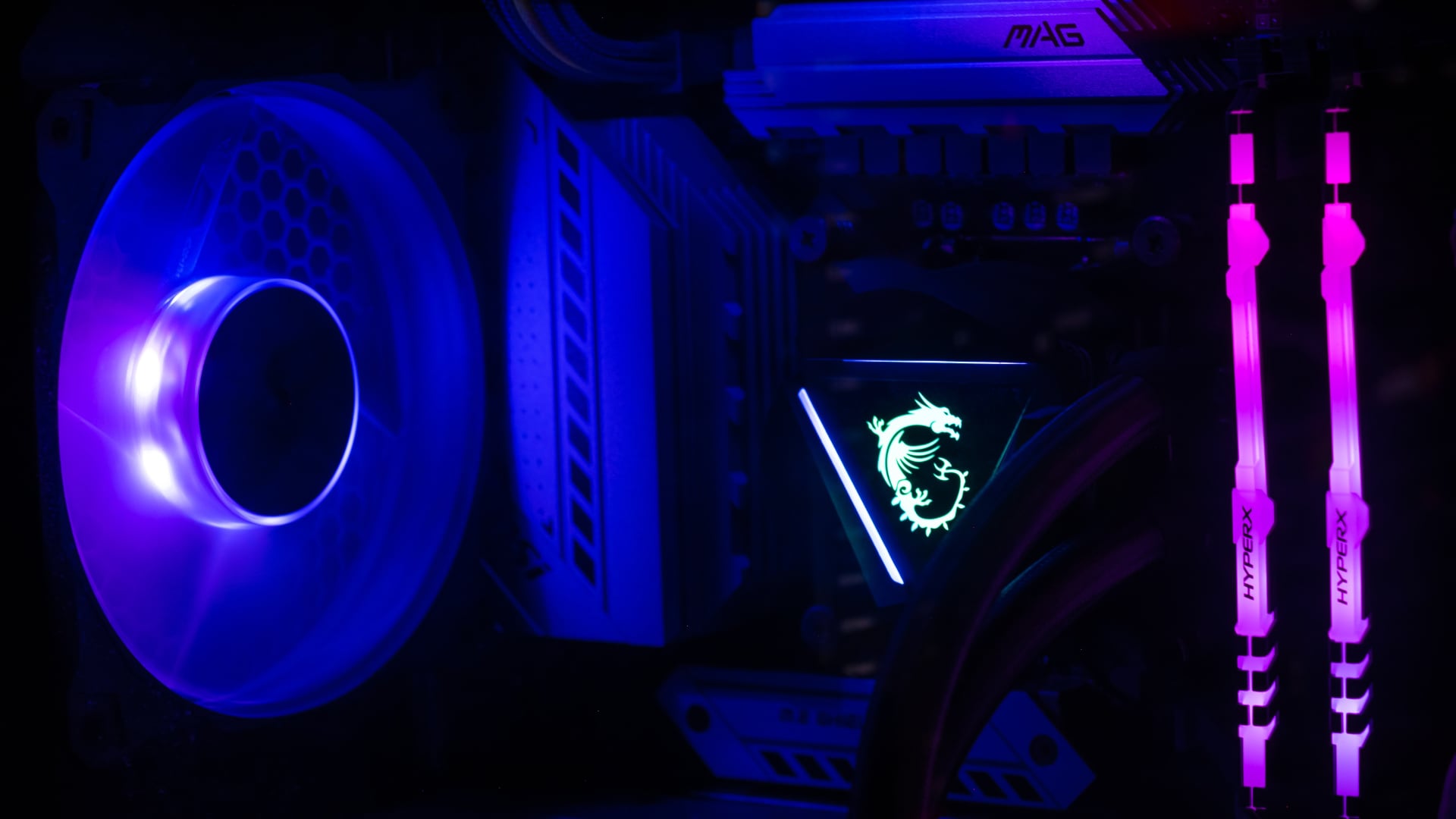 MSI is a PC hardware company that manufactures a variety of PC components, including gaming PCs.

Over the years, MSI went from being a PC hardware company focusing on manufacturing PC components such as motherboards and graphics cards to a behemoth in the PC hardware industry that dabs into every PC hardware niche, from laptops to high-end AIOs. And one of those niches is prebuilt PCs. Now, while the company has office and productivity PCs as part of its lineup, the majority of MSI prebuilt PCs are gaming machines.

Today we’re looking at the best MSI gaming PCs. While MSI’s gaming PCs don’t have great value when it comes to budget models (read: prebuilt PCs that cost around $1000), we’ve been pleasantly surprised regarding the pricing of their high-end models. Also, MSI is one of the rare prebuilt PC manufacturers that offer SFF gaming PC, so we had to include one. Overall, you’re looking at seven picks, ranging from more than solid 1080p gaming machines to RTX 3090-powered beasts. 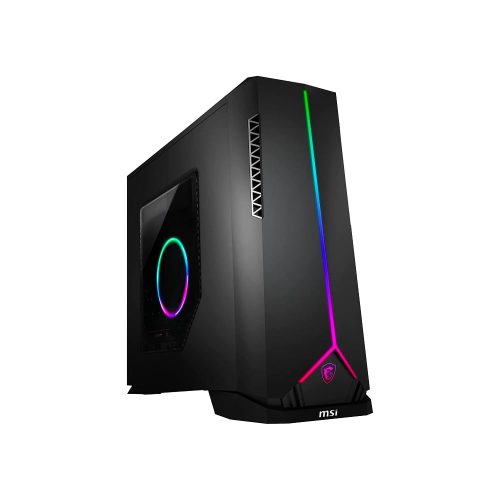 This particular MSI Aegis SE configuration is a bit too pricey for our liking, but if you want an MSI gaming PC, this is the best budget option. Despite placing it into the budget category, this PC is capable of delivering more than [email protected] in the latest AAA games with high or ultra details (depending on the title). Hell, you can even use it for 1440p gaming if you’re ready to lower visuals to medium in more demanding titles.

While 16GB of RAM is par for the course at this price point, 1TB of fast SSD storage is a nice bonus. The system is packed inside a cool-looking case that features tons of RGB. On the flip side, we’d monitor thermals if we were you since the chassis isn’t that great regarding airflow. Overall, we like the amount of gaming performance here, and we would like it even more if this PC was 10-15 percent cheaper. 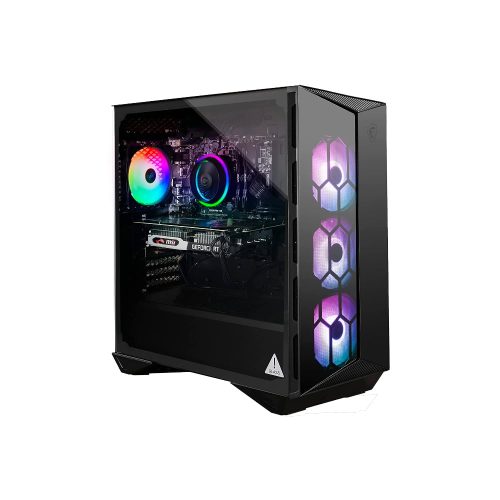 The MSI Aegis R powered by an RTX 3060 is our pick for the best value MSI gaming PC. As we already said, the heart of this particular Aegis R config is an RTX 3060, a card with enough oomph for high refresh rate 1080p gaming and 60fps 1440p gaming. You’ll have to enable DLSS to achieve 60fps in the most demanding titles with ultra details at 1440p, but most games will run higher than 60 frames per second at 1440p, even with visuals set to the max. Of course, esports games will run at triple-digit frame rates even in 1440p.

The CPU here is the Core i7-11700, which is more than enough for the RTX 3060. Its gaming performance is in the ballpark of CPUs such as Ryzen 5 5600 or Core i5-11600K, which means it can handle any current GPU. And once the RTX 3060 inside this PC becomes too slow for modern games, you’ll be able to upgrade the GPU without replacing the processor. Finally, this CPU is a pretty solid solution for gamers interested in video editing or other CPU-intensive work.

The rest of the specs are what you’d expect at this price point. 16GB of dual channel DDR4 3000 MT/s memory and a 1TB NVMe SSD. The hardware is packed inside an MSI-made case that, again, looks like it doesn’t have the best airflow. At least you’ve got enough RGB to host a party. While the GPU thermals should be in check, you should monitor CPU thermals and replace the CPU cooler if they prove too high for comfort. We recommend any of the liquid coolers found in our list of the best 240mm AIO liquid coolers. 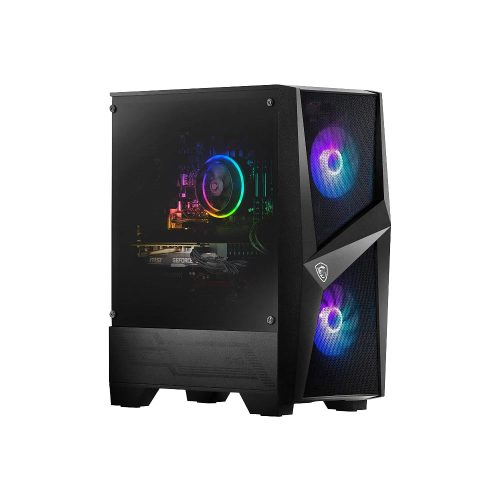 While this MSI Codex R desktop doesn’t have as powerful a CPU as our previous pick, it does feature an RTX 3060 Ti graphics card. And while having a 11400F instead of a 11700 won’t matter much since the two have virtually identical gaming performance, and RTX 3060 Ti is, on average, more than 30 percent faster than the RTX 3060. In other words, you’re looking at 30% higher gaming performance for about a 15% higher price.

This means that the MSI Codex R should achieve 100fps or more in less demanding AAA titles and around 60fps in most demanding games, with all settings cranked to the max. You can also expect 60 frames per second with ray tracing effects turned on. Of course, you’ll also have to enable DLSS if you plan to feast your eyes on shiny RT effects. Finally, if you only play multiplayer games, this configuration should be fast enough for 4K gaming, especially if you play with competitive (read: low) visual settings.

The Codex R also features 16GB of dual channel DDR4 3000 MT/s memory, a 512GB SSD, and a 1TB hard drive. Overall, just the right amount of memory and storage for the money. Another positive is that the chassis has a mesh front panel and two RGB case fans mounted on the front, which should increase airflow and deliver much better CPU and GPU thermals than our previous pick. Overall, this is clearly the best bang-for-buck MSI gaming PC you can get at the moment. 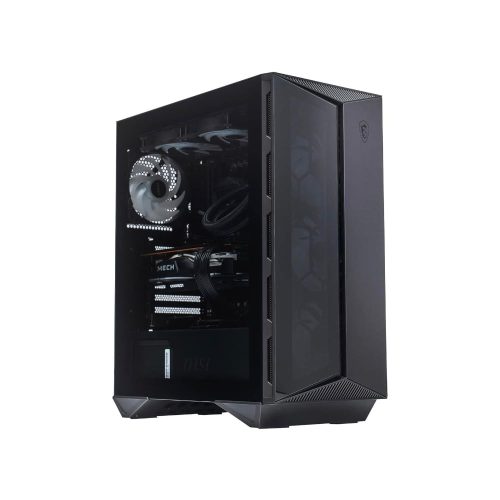 The MSI Aegis ZS is the best mid-range MSI gaming PC we found on Amazon. While not as great a purchase as the Codex R, the Aegis ZS should achieve about twenty-five percent higher performance in games on average.

This level of performance equals a high refresh rate 1440p gaming experience in every single game available at the moment. Some games will require DLSS to go over 100 frames per second, but most will push 100fps+ in native 1440p resolution. With that said, turning on ray tracing effects will drop performance to about 60 frames per second.

This level of performance is made possible by a Ryzen 5800X + RTX 3070 Ti combo. Both the CPU and GPU are some of the fastest gaming hardware available at the moment. The former is fast enough to support a next-gen GPU once the time comes to upgrade the current graphics card. The latter should even be fast enough for 4K gaming, as long as you’re ready to lower visuals to high or medium. The 5800X is also great for any CPU-intensive work, such as video editing.

As for the rest of the specs, you’re looking at 16GB of dual channel DDR4 3200 MT/s memory and a 1TB NVMe SSD. Overall, okay for the money, but we would like to see a 1TB hard drive on top of the SSD since this PC costs almost $2000. The case comes with three RGB fans, and a 120mm AIO is responsible for cooling the CPU.

Despite an AIO liquid cooler used for cooling the processor we would look closely at thermals since the front of the chassis doesn’t have much space for air to come in. Finally, if you decide to get this PC, a 1440p 240Hz monitor would be a great addition, especially if you primarily play multiplayer games. 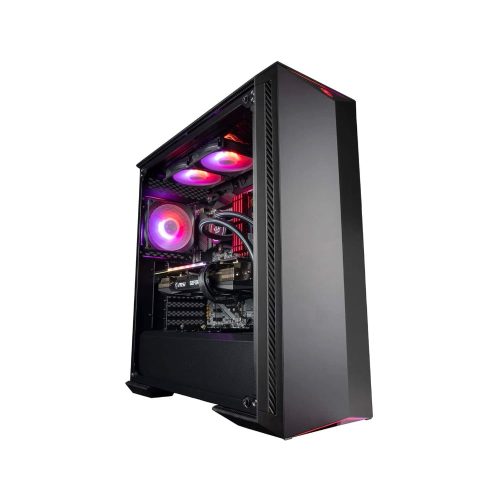 If you want to game at 4K or demand the best possible performance in 1440p, take a look at the Aegis RS. This is the best high-end MSI gaming PC powered by an RTX 3080 and a Ryzen 5800X. Now, this is quite a fast GPU + CPU combo that will serve you well in years to come.

The GPU is fast enough for 4K gaming with all options cranked to the max. Depending on the game, you’re looking at performance between 60fps-100fps. With ray tracing, you’ll have to enable DLSS to get playable framerates. 1440p, on the other hand, is where most games will run at framerates north of 100fps, with ultra details. And with ray tracing and DLSS enabled, even graphic hogs such as Cyberpunk 2077 and Dying Light 2 should run at or near 60fps.

Now, while the case used here is, again, poorly ventilated, it looks like a larger AIO (probably a 240mm unit) is cooling the CPU, so thermals should be fine. It’s good to finally see 32GB of memory since this is a proper high-end gaming PC. While not the fastest memory available – we’re looking at DDR4 3200 RAM – it’s still fast enough for the Ryzen 5800X and shouldn’t noticeably lower average framerates compared to something like DDR4 3600 MT/s memory.

The storage situation here is good but not great. While you’ve got 2.5 terabytes of storage in total, only 512GB is fast SSD storage. This isn’t ideal, and something like a 1TB SSD + 1TB HDD would be a much better solution at this price. Still, this is the best high-end MSI gaming PC you can get considering the price and the overall specs. 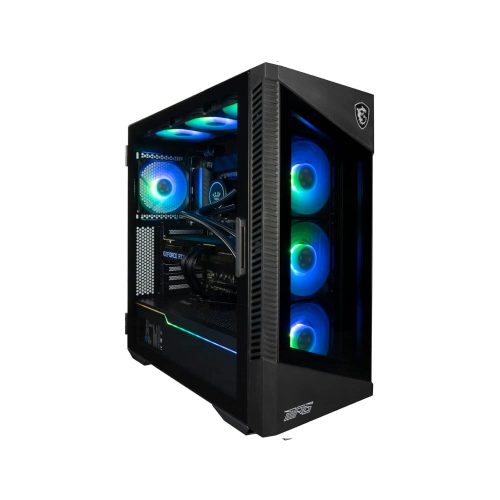 Now, if you want to go balls to the wall and don’t care about the price, we have something for you. The MPG Velox is a gaming beast packing an RTX 3090 and a Core i9-12900KF. This is more or less the fastest gaming combo available. An RTX 3090 Ti and a Core i9-12900KS are technically faster, but that combination would probably cost something like $1000 more while offering a percent or two higher performance.

This PC is made for 4K gaming, and it should achieve triple-digit framerates in every AAA game with max details. Even with ray tracing, you should achieve around 60 frames per second as long as you enable DLSS and don’t use the absolute highest ray tracing settings. Further, this combo is also great for serious work such as video editing or GPU-accelerated rendering. Overall, no matter what you plan to do with this PC, it will exceed your expectations.

As for the rest of the specs, you’ve got 64GB of memory, which is excellent for everyone planning to use this PC for more than gaming. Next, the MPG Velox comes with a 1TB NVMe SSD and a 3TB hard drive. Again, lots of storage, but a 2TB SSD + 2TB hard drive would be a better solution for a PC that costs as much as this one.

Finally, the case here should have a decent amount of airflow, considering it has intakes on both sides and the top and that it comes with nine RGB fans if we account for the fans mounted on the CPU AIO liquid cooler. 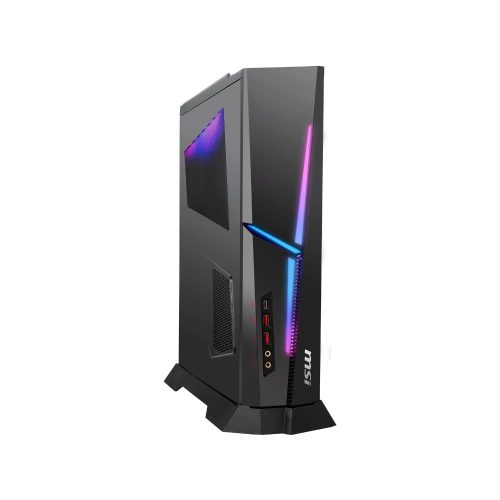 MSI is a rare prebuilt PC brand that offers pretty solid SFF (small form factor) gaming PCs. They’re pricier on average than builds packed inside regular, mid or full tower cases, but if you want a super compact gaming PC, you’ll have to pay the price. And while the Trident AS doesn’t have the most powerful CPU & GPU combo, we think it offers the best price-to-performance ratio of all MSI SFF gaming PCs.

The GPU here is an RTX 3060 Ti, and the CPU is a Core i7-12700F. The former is capable of delivering a 1440p high-refresh-rate gaming experience in most games, while the latter is one of the fastest gaming CPUs you can get today. While not a K-series CPU, the 12700F is almost as fast as the 12700K/12700KF while using much less power and thus not needing a beastly cooler. Which is very important considering we’re talking about a small form factor gaming PC.

The MSI Trident AS also includes 16GB of dual channel DDR4 3200 RAM and a 1TB SSD. Good enough for the price, especially considering this is an ITX prebuilt PC. And those always cost extra. Finally, the case here is quite tall but also quite sleek and with two large air intakes positioned over the GPU and the CPU cooler. Considering the CPU here is a 65W part, CPU thermals should stay in a safe range even during summer days.

While it looks like a perfect case to put under your TV instead of a console, we wouldn’t do this because both sides need to be well-ventilated. We recommend keeping the housing in its default, vertical position. Overall, we really like the design of the chassis. It’s not too aggressive while offering lots of RGB and solid airflow. So, there you have it. If you want an SFF gaming PC made by MSI, the Trident AS is the best choice.