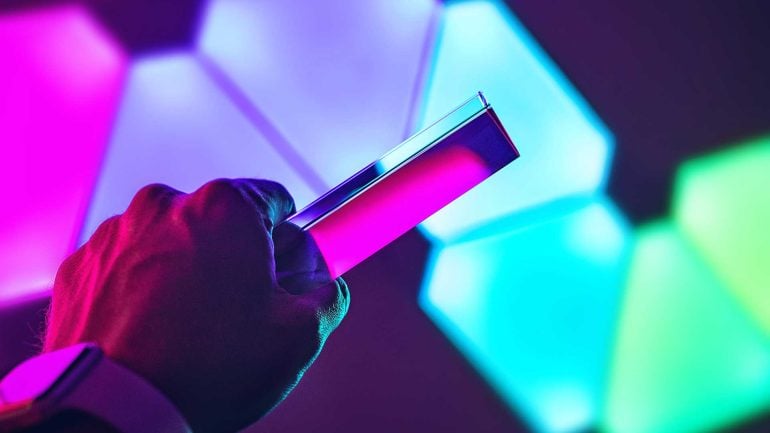 If you don’t have a big budget, perhaps one of these alternatives is more suited for your tastes.

Nanoleaf is a pretty cool lighting gadget, but it’s also quite expensive. The concept is simple yet flashy, and it’s strange how someone didn’t think of it earlier. In the age of RGB, Nanoleaf is one of the best gadgets you can get. If you like RGB, of course. But if you don’t have the cash or don’t want to pay the steep entry price, we’ve got you covered.

Below you’ll find the eight best Nanoleaf alternatives. We have the budget and high-end choices. We included designs that are more or less copycats and proper alternatives for people who don’t want to cover their walls with a ton of RGB LEDs. Finally, each option has something unique going for them. Whether that’s an affordable price or a unique design that doesn’t have anything in common with Nanoleaf. 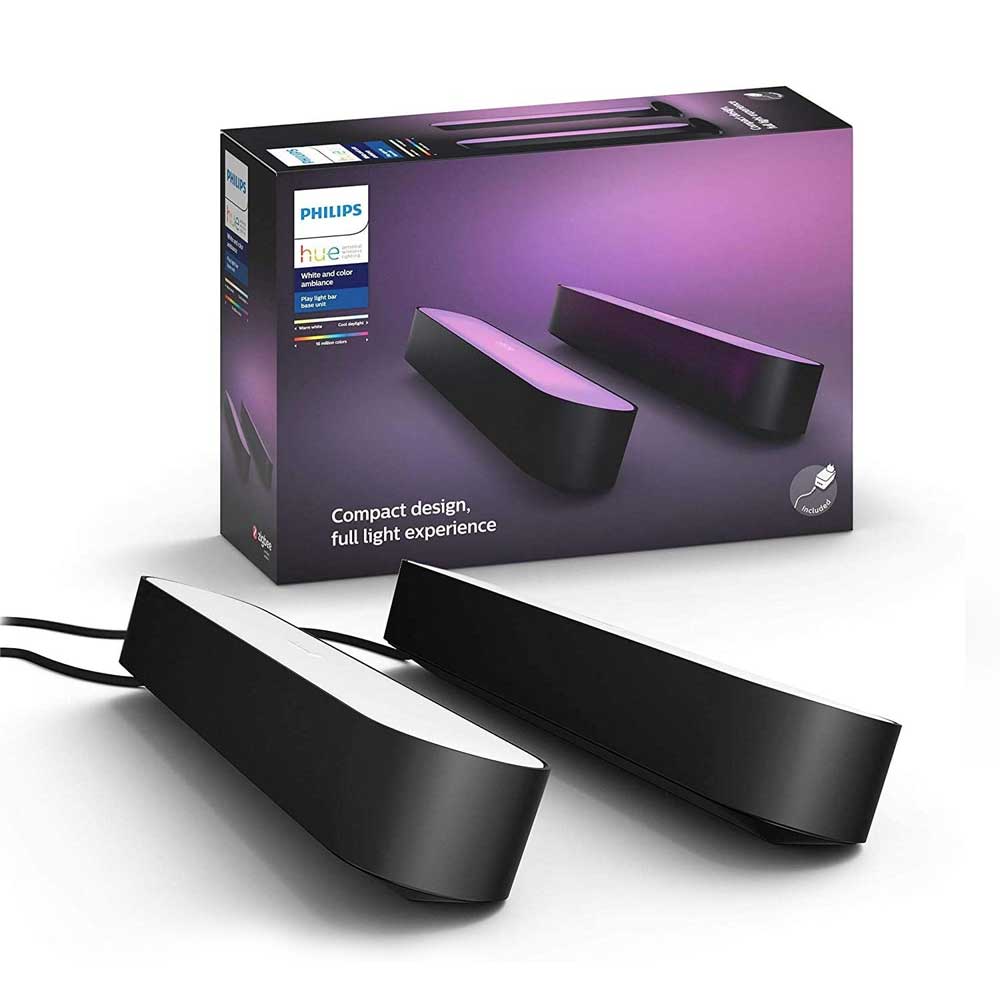 If you like RGB but don’t want to cover your wall(s) with RGB LED panels, the Hue Play Light Bar from Philips is the best high-end Nanoleaf substitute.

First of all, the Hue Play is packed with features, including all features found on Nanoleaf. This includes music, movies, and games sync, allowing you to turn your TV or monitor into a proper Ambilight device.

The Hue Play also works with a range of digital assistants, and its design makes its lighting effects subtler than Nanoleaf. Instead of mounting it face-first on walls, you can turn the bars away from you, resulting in a more modest effect compared to the in-your-face RGB light show provided by Nanoleaf. The Hue Play also offers a slew of setup options, unlike Nanoleaf.

You can install the units on the back of your TV or gaming monitor. You can also place them next to your display facing the wall or your eyes if you want the whole RGB experience. You can put them on the floor, behind plants, on the ceiling, etc. Overall, the Hue Play offers a ton more installation options.

And the best thing of all is that it just works. The Hue Play is fully integrated with every Hue product and allows owners to create hundreds of unique setups. There’s also the mobile app. The app includes predefined scenes, custom lighting scenes based on day, mood, etc. Do note that, to enable game sync, you have to install the Hue PC app. 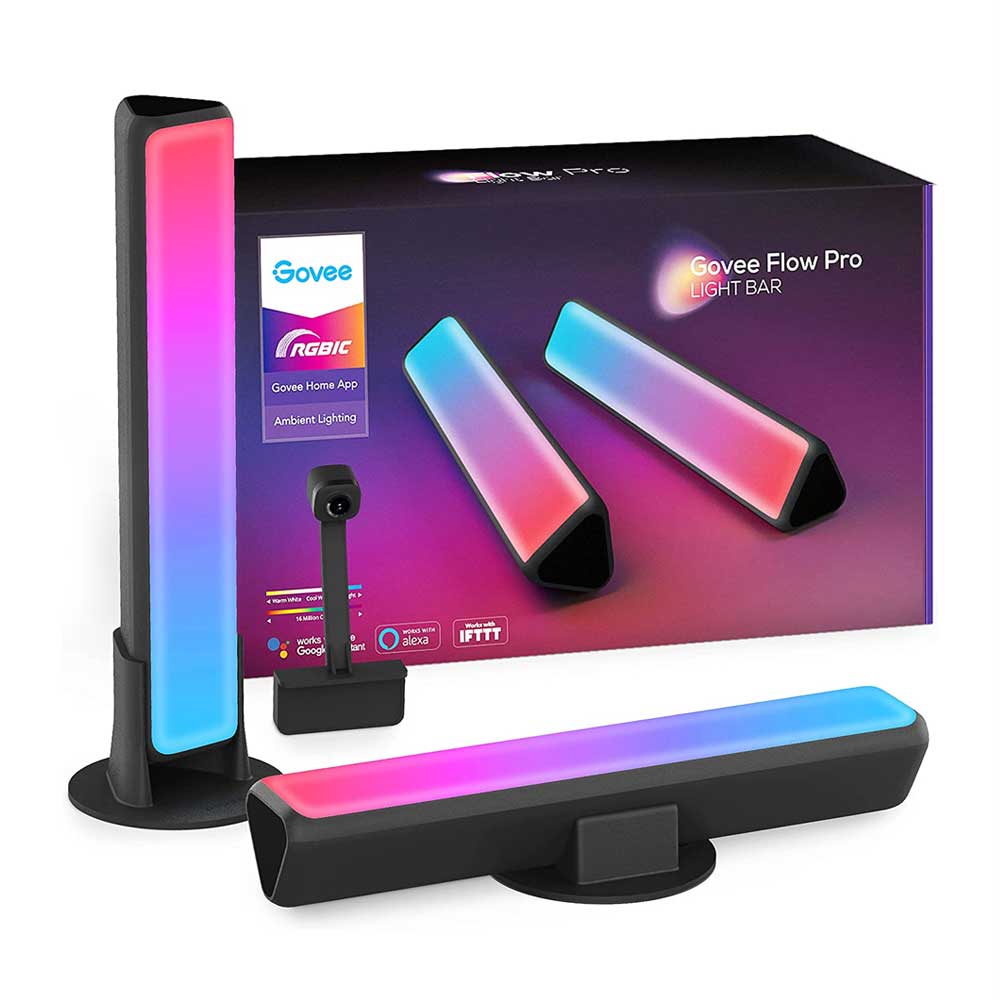 If you like the Hue Play but think it’s still too pricey for what it offers, check out the Govee Smart LED Light Bars. This is the best budget light bar Nanoleaf alternative. These are very similar to the Hue Play but are much cheaper. They provide the same level of variation in setup options, but they lack the complete Nanoleaf experience.

Yes, these work with Google Assistant and Amazon Alexa. They also support Music Sync. But, their video and gaming sync capability works via an external camera, not via a PC app. This means you have to find a place for the camera (provided in the selling package), which can be tricky.

Luckily, the Govee light bars come with a mobile app. The app supports various scenes as well as the Music sync and other features. While the quality of the RGB experience is below both Nanoleaf and Philips Hue Play, the price of the Govee Smart light bar base kit is just a third of the cost of the Nanoleaf base kit. 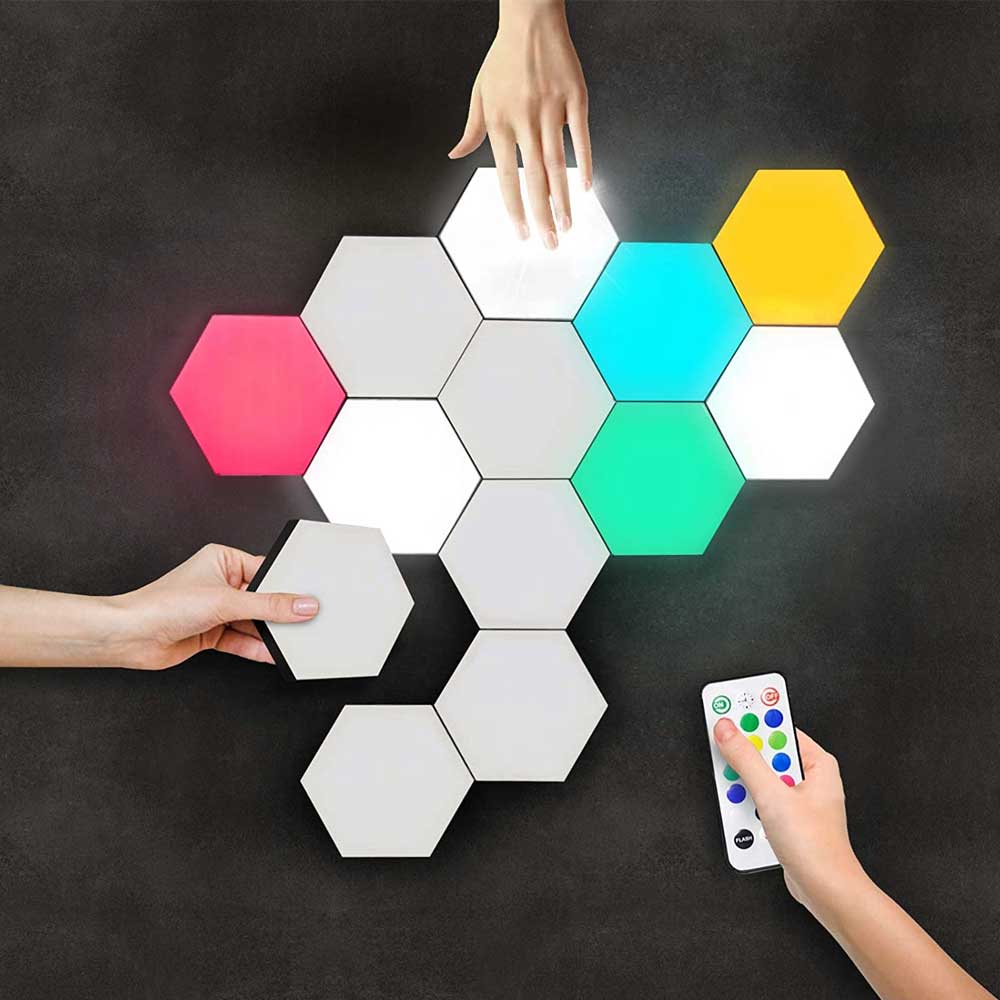 The Hexagon Lights from Luminosia is the best barebones budget Nanoleaf alternative. It’s made for people who want pretty lights covering their walls without extra features. Here we have hexagonal tiles that are relatively smaller than Nanoleaf tiles (all hexagonal light kits on this list are similar).

There’s no music or gaming sync, no digital assistant support, and there isn’t a mobile app. You can only set colors of the whole set or individual tiles with a provided remote or select different colors by touching the tiles.

That said, these work great if all you want is dynamic RGB tiles that you can mount on a wall. Do note that many users report poor quality of the adhesive pads provided in the selling package.

Make sure to get quality adhesive if you don’t want the lights to fall off the wall after a while. Also, with these, you get only 13 different colors. You can connect as many tiles as you want, but the manufacturer suggests using an extra USB power cable for every ten connected tiles. 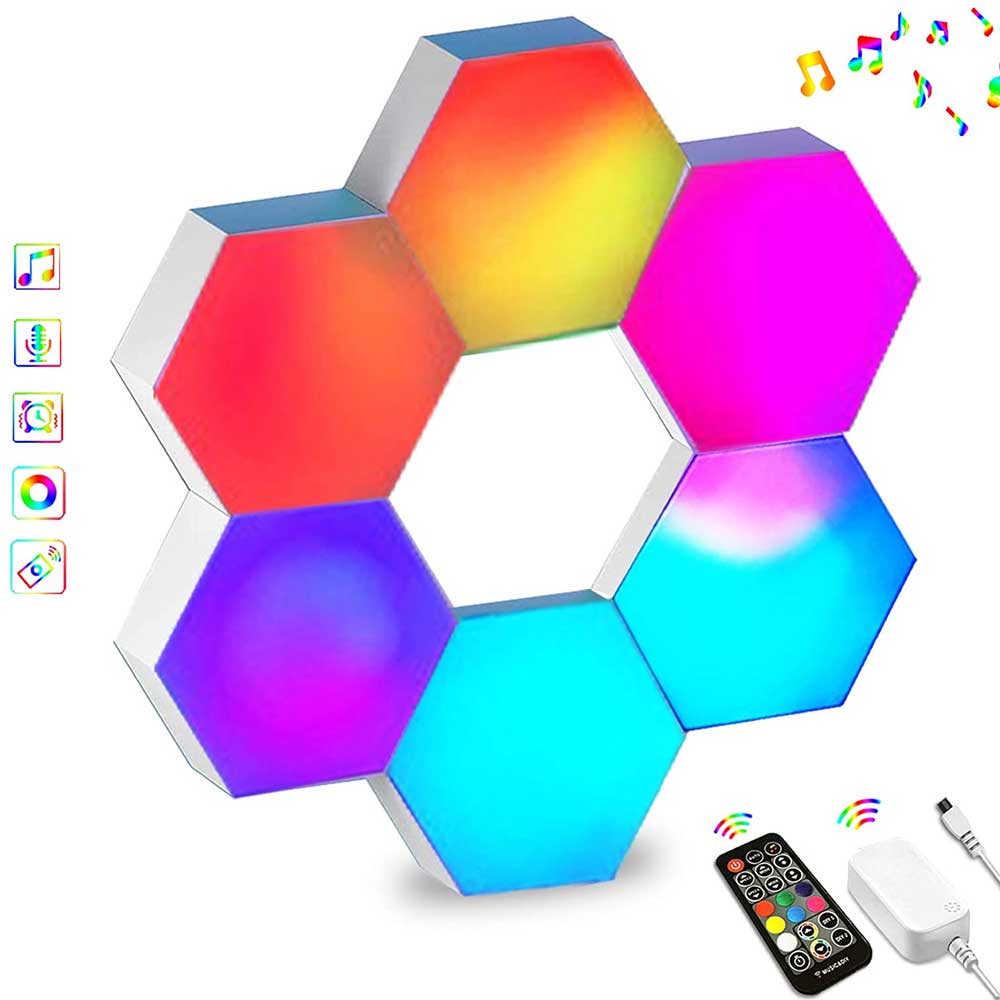 Kicking it up a notch, we have the best budget Nanoleaf alternative that includes the music sync feature. In other words, the Amailtom Hexagon RGB Lights are the same as the Luminosia and Odistart, but here you also get music sync.

The lights use an external microphone (provided) to sync to the tunes. There’s no mobile app here, but these come with the full 16 million colors RGB experience and 60 RGB modes.

The provided remote has lots of features. Instead of just including different colors, a couple of effects (flash, fade, etc.), and the ability to increase or dim the brightness, the remote coming with the Amailtom Hexagon Lights supports options such as changing the speed of the color switching effects, an “alarm clock” that turns on the lights at a specific time, and more.

The quality of the colors is pretty high. They are bright enough to light up a dark room and come in packs of six units. As with other smart hexagonal lights, you can connect as many tiles as you want, as long as you provide one USB power cable for every ten units.

And again, adhesive pads provided in the selling package are of lower quality, so make sure you have quality pads around before installing these. 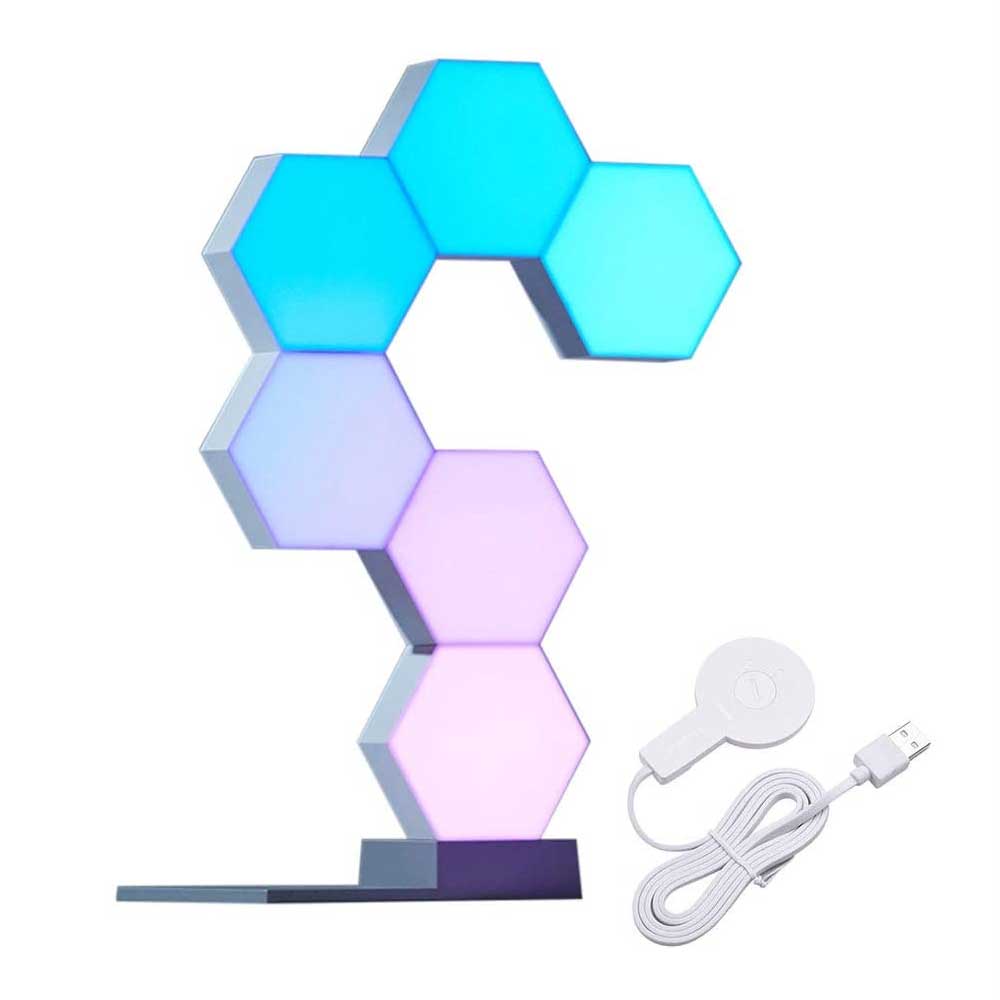 Kicking it up another notch, we have the Yescom WiFi Smart LED Light Kit that offers Music Sync, a mobile app, and Alexa and Google Assistant integration. Another plus is the inclusion of a plastic base allowing users to place the lights on any surface, not just on walls.

You also get multiple base kit variants. You can choose between a 3-pack, 5-pack, 6-pack, 7-pack, 9-pack, 10-pack, and 11-pack. All starter kits come with the same plastic base, but the 6-pack and 10-pack base kits offer baseless variants.

The base is ABS plastic which is the same plastic used for keyboard keycaps. Unlike the previous choices, these lights support a maximum of 20 tiles instead of an unlimited number of blocks. Again, if you exceed ten lights in one design, make sure to use an additional USB power cord.

This time you don’t get a physical remote. Instead, you have to use the mobile app (iOS and Android), which equals a much larger number of RGB effects and the option to create custom effects. The app is far less powerful than the Nanoleaf or Philips Hue apps, but it works as intended and supports custom RGB effects.

Do note that kits coming with the base don’t include wall-mount adhesive strips. But since, again, adhesive strips aren’t of the highest quality, this isn’t such a big deal. Finally, the individual units aren’t touch-activated. 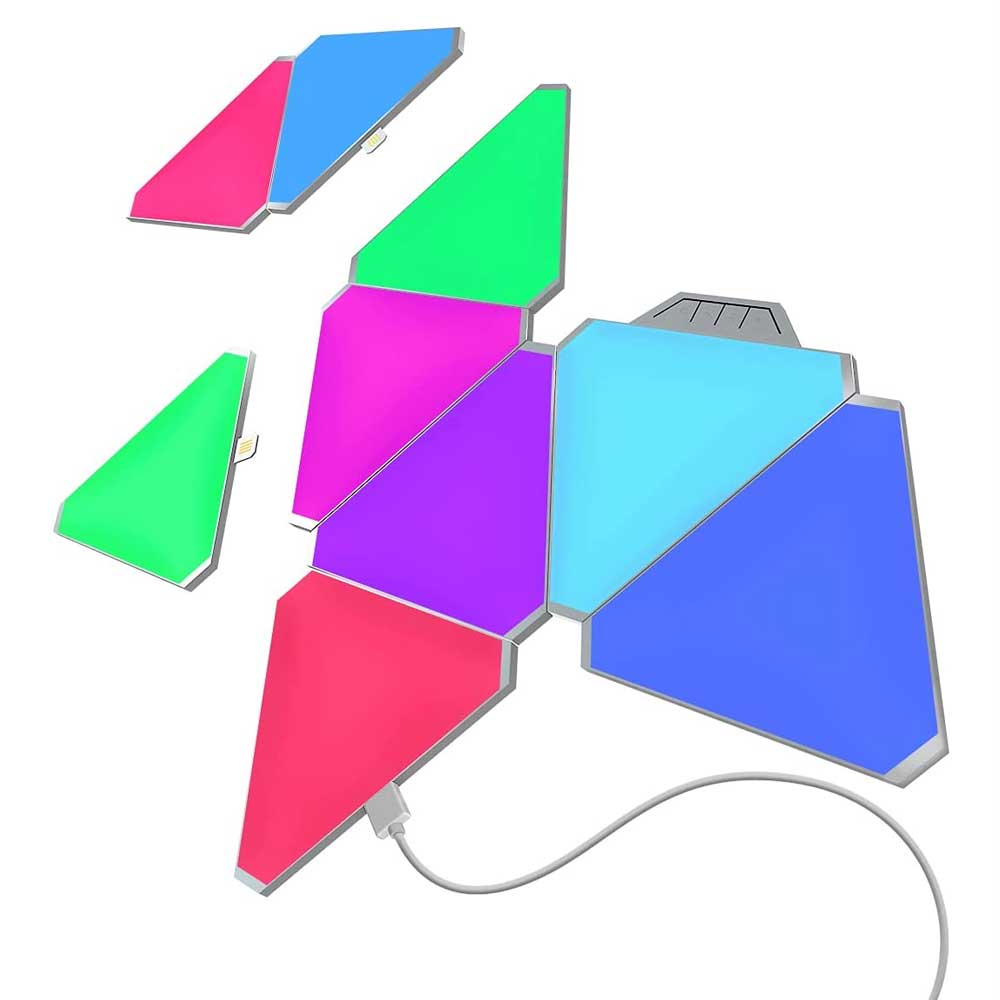 For those who want the best Nanoleaf alternative with a triangle design, the 8WASAI Triangle Light Kit is the one to get. This smart light kit looks almost precisely like Nanoleaf. You don’t get the gaming sync, only music sync.

Further, you cannot set the colors of individual tiles. That’s about the only limitations compared to the original. The individual units are larger than hexagonal tiles, are pretty bright, and support the entire 16 million colors RGB range.

Music sync works via an external microphone, and there’s also the mobile app and Alexa and Google Assistant integration. The kit comes with a simple controller that can be connected to one of the tiles.

The controller includes the on/off switch and a button for switching between preinstalled RGB scenes. The app supports custom lighting effects, and it’s the only way to change the brightness of the lights. The max number of tiles is unlimited, but the manufacturer recommends one USB power cable for every nine tiles.

Also, you can use one physical controller for up to 18 panels. If you want to add more, you’ll have to install an additional controller on top of a USB power cable. The included adhesive strips are of higher quality than most other kits on this list, which is another plus. 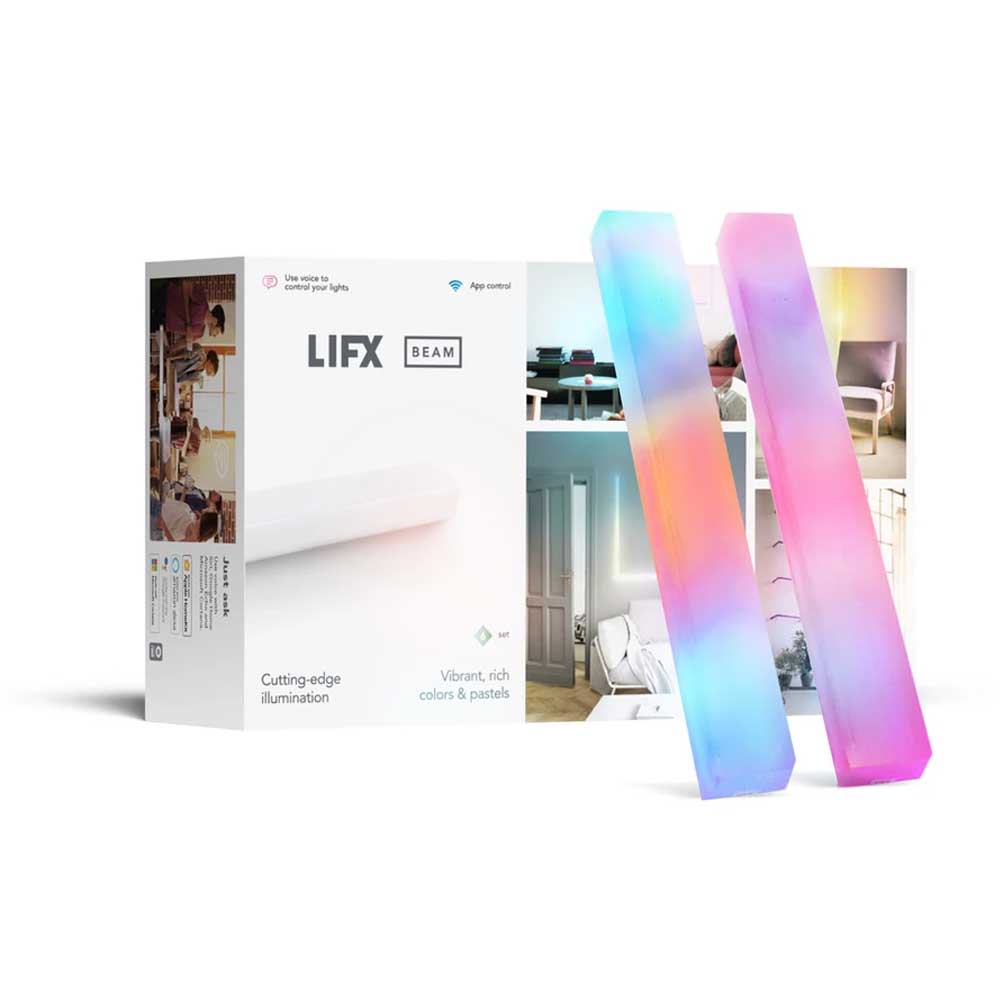 Last but not least, we have the LIFX Beam, which looks like a plastic beam with a ton of RGB LEDs under its surface. This unconventional design might not fit into every room, but we have to say, it’s one-of-a-kind. This is the best Nanoleaf alternative for those who don’t like the Nanoleaf design.

The base pack includes six beams in total and one corner kit used to connect two light beams seamlessly. The LIFX Beam comes with iOS, Android, and Windows 10 apps that offer many different RGB effects with support for custom effects.

Each beam includes multiple RGB zones, and each zone can be individually programmed. RGB implementation here is solid with super-bright LEDs, brighter than those used in Nanoleaf panels. On the flip side, there’s a noticeable separation between different LED zones, which doesn’t look great in person. Another downside is the poor quality of the included 3M Velcro strips.

Combine poor quality Velcro with a hefty beam weight, and you’ve got yourself one painful installation procedure. As for the syncing features, the LIFX Beam supports Razer Chroma, which offers game sync for a limited collection of titles. If you have a Razer mouse, keyboard, or other peripherals, LIFX Beam might be the best Nanoleaf alternative.

Music sync is fairly good when using the Windows 10 app, but the experience is way worse when using the mobile apps due to a fairly high lag. The Beam works with Alexa, Google Assistant, Apple HomeKit, and Microsoft Cortana when it comes to the home assistant integration.

You can activate the lights via voice, but the cool thing is that, depending on the assistant you’re using, you can program the lights to turn on based on a custom schedule or motion if you have motion detectors linked to an assistant. The lights can also change colors with the weather changes. Overall, the LIFX Beam is a pretty solid Nanoleaf alternative, with the high price being its biggest downside.