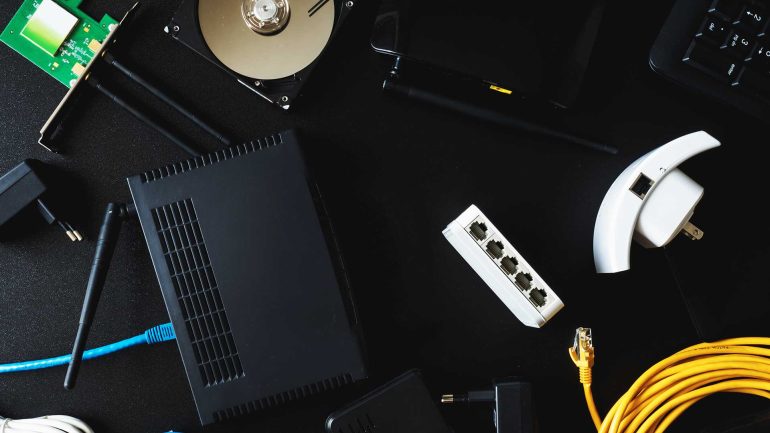 If your motherboard doesn’t come with Wi-Fi support, you have a couple of ways to enable wireless connectivity on your PC. You can get a wireless adapter in the form of a USB or a PCIe Wi-Fi card, both of which are pretty good choices.

While you’re here, you might also be interested in our lists of the best fiber optic modems and routers and the best Z690 motherboards. Finally, check out our guide for the best RGB motherboards in case you want your next PC to have a quality light show. 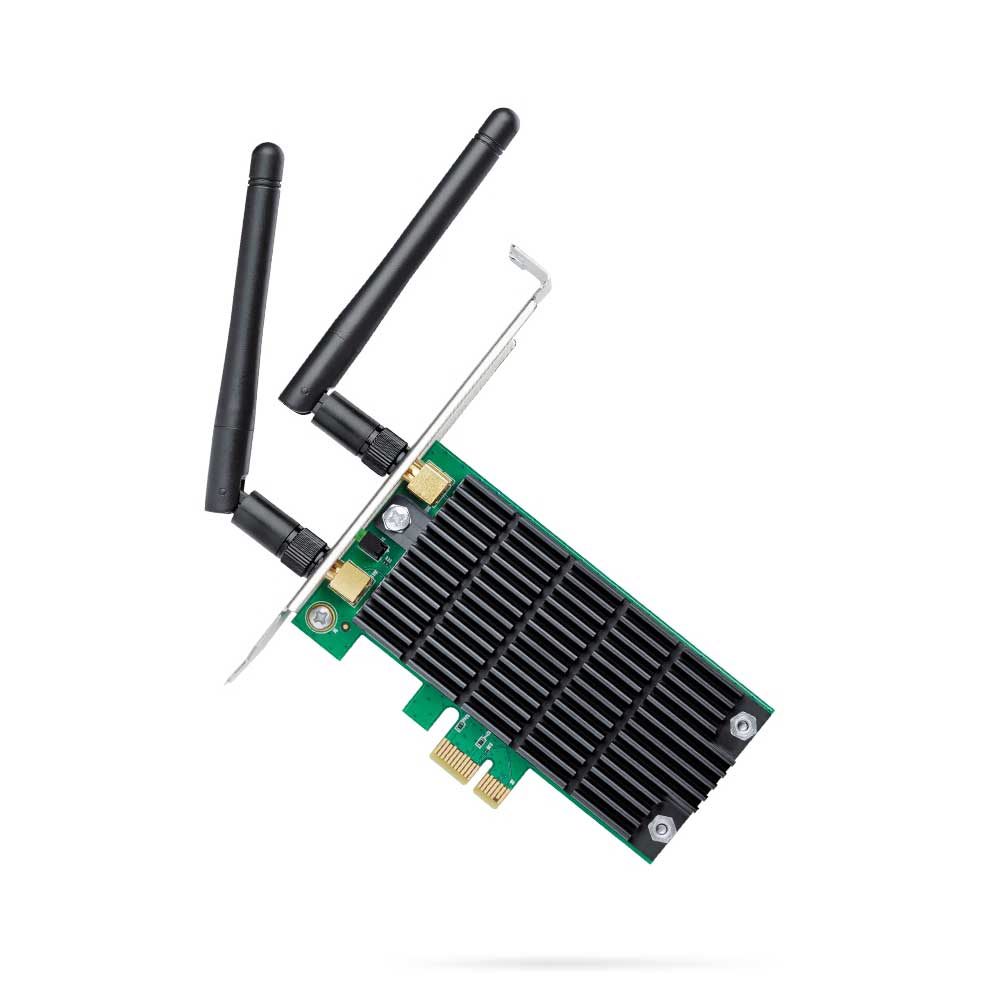 The TP-Link Archer T4E is an affordable PCIe Wi-Fi card and our pick for the best budget PCIe Wi-Fi card. The T4E comes with pretty solid performance, and doesn’t take much space. The card itself is pretty small, and it features two detachable antennas. It has Wi-Fi 5 and dual-band support.

The card can reach up to 300Mb/s over the 2.5Ghz band and up to 867Mbps over the 5GHz band. If you take a look at user reviews, you’ll notice that the real-world connection speed is pretty good.

Owners reported reaching about 880Mb/s over the 5GHz band, which is faster than the rated speed. As for the range, the card comes with beamforming, which should increase stability and decrease latency.

Overall, the Archer T4E is a powerful little PCIe Wi-Fi card that has excellent performance and is at a very affordable price. If you don’t need extra features such as MU-MIMO, Wi-Fi 6, or Bluetooth, this is the best PCIe Wi-Fi card on the market. 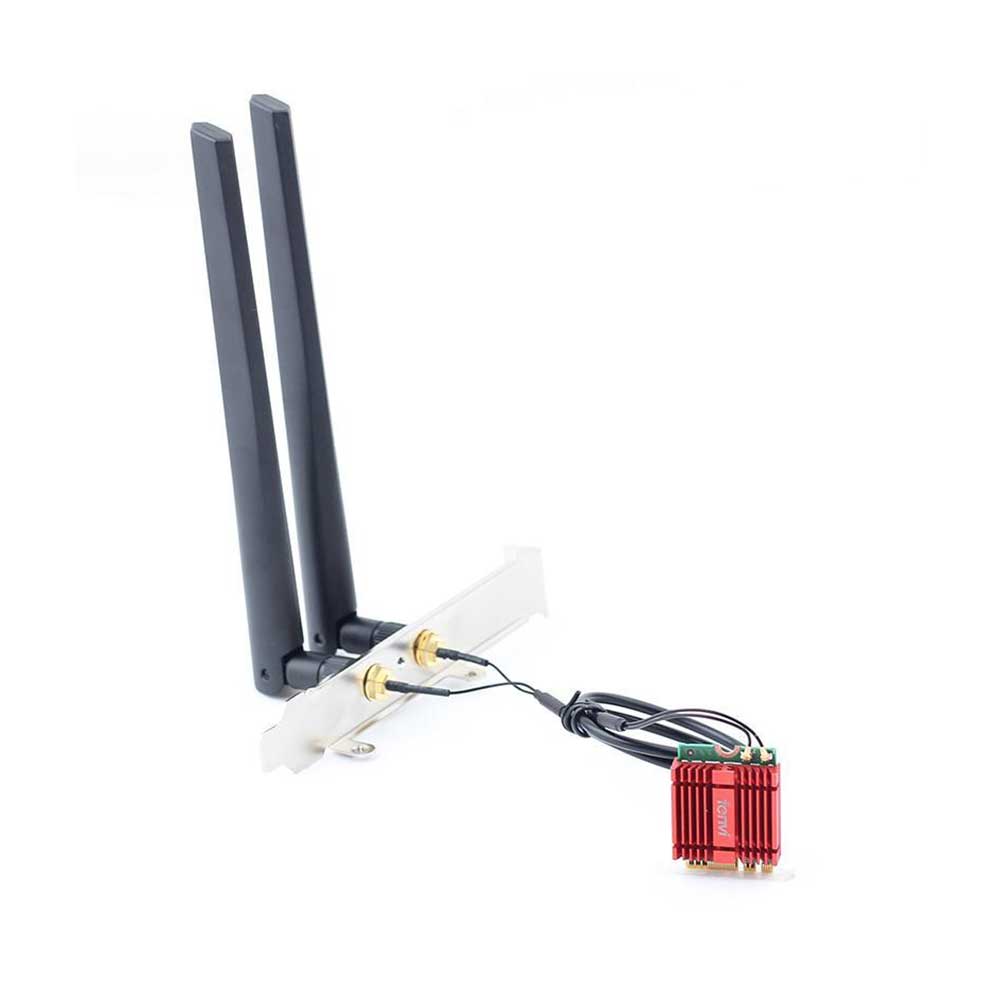 If you own a motherboard with a dedicated Wi-Fi M.2 slot and need a cheap Wi-Fi 6 card, check out the fenvi FV-AX200. It sports virtually the same price as the Archer T4E, but this one comes with Wi-Fi 6 support. Other than Wi-Fi 6, the card comes with dual-band, MU-MIMO, beamforming, and Bluetooth 5.0. That’s a killer feature set for the price.

The card’s rated at 574Mb/s over the 2.5GHz band and ultra-fast 2,400Mb/s over the 5GHz band. That’s pretty fast, and it should allow you to max out your internet speed and achieve excellent performance when sharing files with other devices hooked to the local wireless network.

This fenvi card is an excellent product. It’s small and very fast, and it also comes with a neat feature set. The catch is that you have to own a motherboard with an M.2 Wi-Fi port (also called M.2 Socket 1 or M.2 socket with E key) to install the card. If you have one, this is one of the best budget PCIe Wi-Fi cards you can get right now. 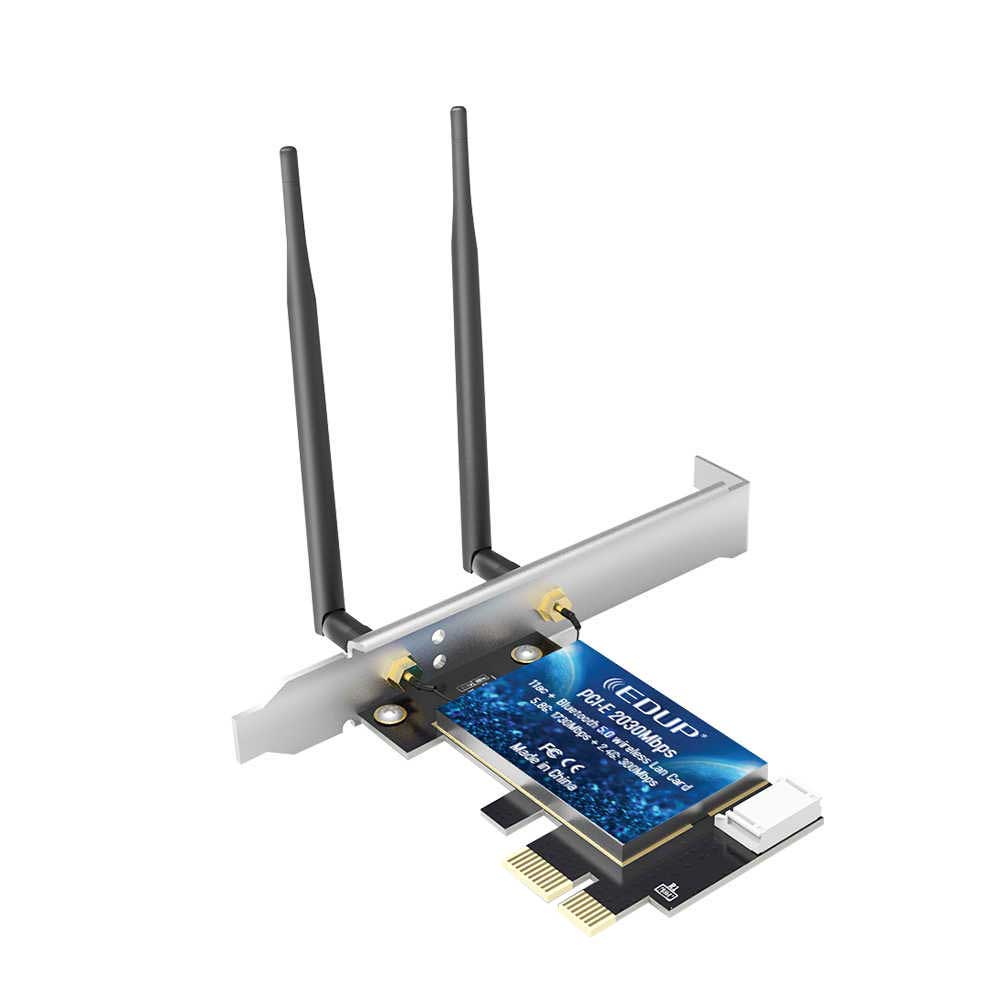 If you don’t have a dedicated Wi-Fi M.2 slot and need Bluetooth connectivity for cheap, the EDUP EP-AC9636 looks like an excellent choice. The card sports a bit higher price than the previous two models, but it does come with two high-gain antennas.

The card also operates on dual bands, and it comes with Wi-Fi 6. Wi-Fi 6 means high connection speed, and this card delivers. The rated speeds are 600Mb/s over the 2.4Ghz band and 2400Mb/s over the 5Ghz band. You also get MU-MIMO and beamforming.

The 3000M is a capable PCIe Wi-Fi card that should satisfy users who have ultra-fast (in the gigabit range) internet plans. It’s cheap, has lots of handy features, and it comes with Bluetooth 5 connectivity. 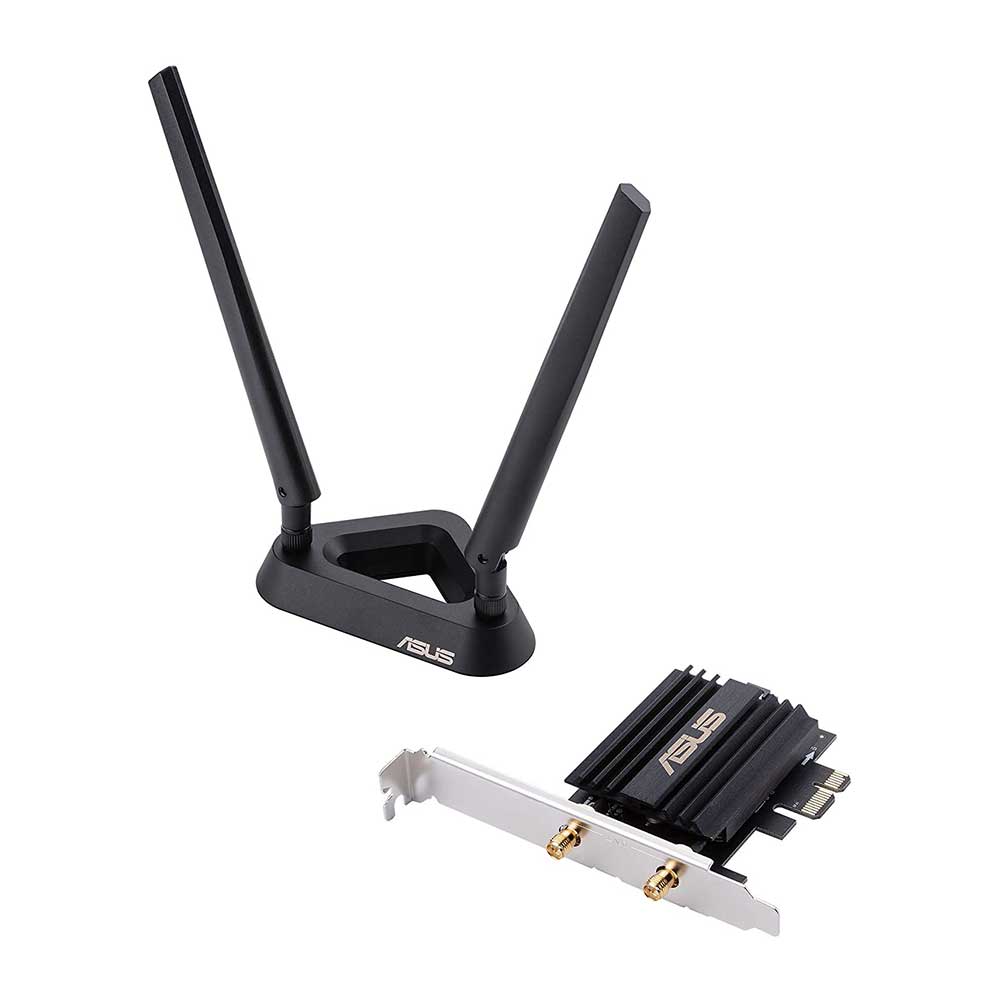 The ASUS PCE-AX58BT is the best mid-range PCIe Wi-Fi card on the market. First of all, it has Wi-Fi 6 and Bluetooth 5. It also comes with MU-MIMO and a technology called OFDMA. OFDMA is Wi-Fi 6 exclusive and it should, in combination with MU-MIMO, reduce latency and provide the best possible online multiplayer experience. If you like playing online games, you should seriously consider getting this card.

The ASUS card also comes with two high-gain antennas and a sturdy-looking base. Also, the card works both on Windows 10 and Linux. Overall, this is the best mid-range Wi-Fi card you can get right now. Insanely fast performance combined with a wide set of features is a killer combo for online gamers and users who rock gigabit internet plans. 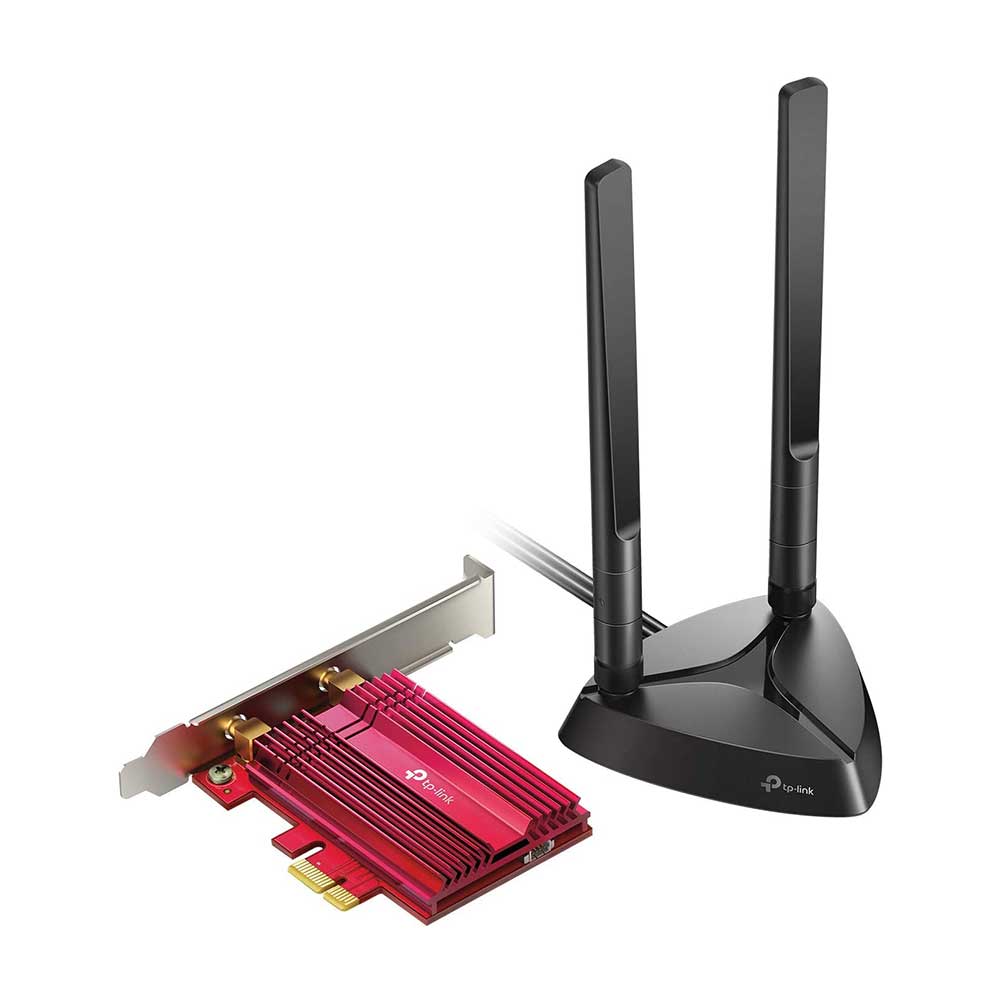 The TP-Link Archer TX3000E is a mid-range PCIe Wi-Fi card packed with features. First of all, it comes with Wi-Fi 6, Bluetooth 5, MU-MIMO, and OFDMA. Next, the rated speed is 2.4Gb/s over the 5GHz band, while the max speed over the 2.4GHz band goes up to 574Mb/s. Tests show a max speed of about 750Mb/s, which is pretty high and should satisfy everyone no matter their internet plan.

The two high-gain antennas can be connected directly to the card or the base, allowing users to place antennas wherever they want. The base looks pretty sturdy, and it has a 1-meter long cable, which is long enough to place the base anywhere near your PC. Do note that this card only works with Windows 10.

Overall, the Archer TX3000E is an excellent PCIe Wi-Fi card that should be especially interesting to gamers thanks to the OFDMA tech found in the card. But the Asus model is a better choice. It packs the same collection of features, is faster, and works both on Windows 10 and Linux. 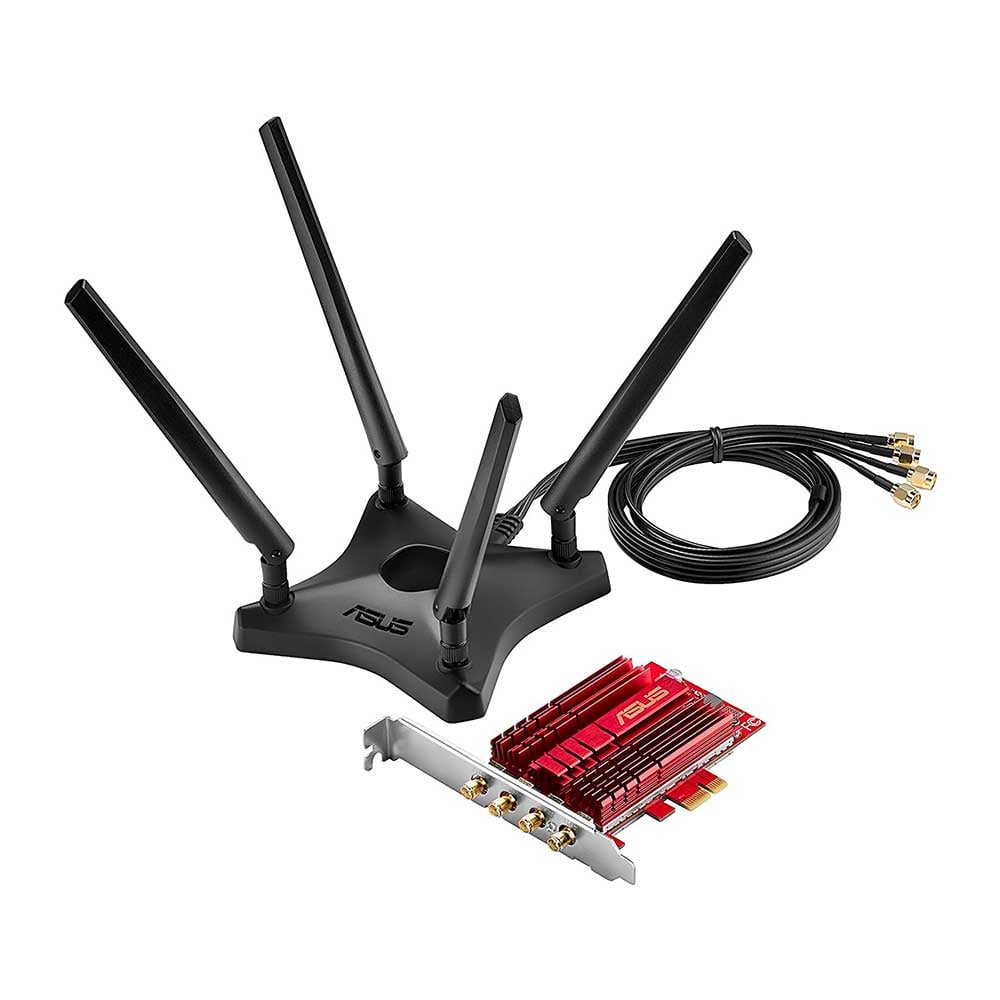 The PCE-AC88 from ASUS doesn’t come with Wi-Fi 6, but it does come with four antennas offering a serious range. The card also has a nice set of features, including beamforming and MU-MIMO. The antenna base is magnetized and comes with extension cables. This is great for users who have their PCs a long way from their router.

Four antennas should allow for a very long range, and the rated 1000Mb/s over the 2.4Ghz band is the fastest we’ve seen. The 5Ghz band can support speeds up to 2167Mbps. Tests show that the card can push about 450Mb/s over the 2.4GHz range and more than 300Mb/s when being 10 meters from the router. This is an amazing result that confirms the great range of the ASUS PCE-AC88.

Speeds over the 5Ghz range are equally impressive. 900Mb/s when near the router and more than 700Mb/s when 10 meters from the router, which is incredible given the fact that wireless signal loses speed pretty fast over the 5GHz range, even when being just a meter or two from a router.

The PCE-AC88 is an expensive card, but it has amazing performance and superb range. You won’t get Wi-Fi 6 and OFDMA, but if you need a capable PCIe Wi-Fi card that can keep a high connection speed even when being very far from the router, this is the best high-end PCIe Wi-Fi card on the market.

Why PCIe over USB?

Getting a USB Wi-Fi card can be a better choice in case you own both a PC and a laptop with a dated wireless chip or one that’s broken. USB cards are very simple to switch between devices, and they don’t require installation other than installing drivers.

But if you own just a PC, a PCIe Wi-Fi card is usually a better choice. First of all, PCIe is a faster standard. PCIe 3.0 standard (present in most current motherboard models) has a bandwidth of 1GB/s (gigabyte) per lane.

On the other hand, the USB 3.0 standard has a bandwidth of 5Gb/s (gigabit) which translates to 640MB/s or megabytes per second. As you can see, PCIe 3.0 is about one-third faster, per lane, than USB 3. Since most PCIe Wi-Fi cards use a PCIe x1 port, they can achieve up to thirty percent faster speeds than USB Wi-Fi cards.

PCIe Wi-Fi cards aren’t just faster. While they are more complex to install than USB Wi-Fi cards, they won’t crowd your USB ports. Remember that every USB card that comes with an external antenna is quite chunky, and it will block adjacent ports. In the end, getting a USB Wi-Fi card can make most of your USB ports located on the back panel unusable.

Overall, if you have the knowledge needed to install it, a PCIe Wi-Fi card is a better choice than a USB card. It supports faster speeds, and it won’t clutter your back panel ports.

Wi-Fi 6, or 802.11ax, is the latest Wi-Fi standard that brings faster connection speed and better connection in cases when many devices are connected to the same wireless network at the same time. Its bandwidth upgrade over Wi-Fi 5 (802.11ac) is substantial, going from 3.5Gb/s on Wi-Fi 5 to 9.6Gb/s on Wi-Fi 6.

The thing is, you won’t be able to get even close to the Wi-Fi 6 maximum speed. Even the fastest internet plans are way below the 9.6Bps bandwidth, which translates to 9600 megabits per second. But Wi-Fi 6 has other perks that may be worth the price for some users.

First, if you have a Wi-Fi 6 router along with a bunch of devices connected to your local wireless network, a Wi-Fi 6 PCIe W-Fi card can make the connection more stable and a bit faster. Next, if you own a Wi-Fi 6 router along with multiple devices with Wi-Fi 6 (smartphones, laptops, other PCs with Wi-Fi 6 cards) support that is connected to your local wireless network, a PCIe Wi-Fi 6 card will make the connection between Wi-Fi 6 devices in your local network faster than if using a Wi-Fi 5 card. In the end, it all comes up to your personal needs.

An important thing to consider is whether you have room in your case for a PCIe Wi-Fi card. While they usually support PCIe x1 standard, you can fit them into any available PCIe slot, whether it’s x1, x4, or x16. If you have a free PCIe slot, you’ll be able to install the card.

But you should also measure how much space you have in your case, especially if you own an SFF (small form factor) PC. Also, if you have a multi-slot graphics card, check whether it blocks access to other PCIe slots or not.

Next, some motherboards have a dedicated M.2 slot for a Wi-Fi chip. If you own such a board, you can get a PCIe Wi-Fi card that uses the M.2 standard instead of PCIe x1.

Finally, let’s talk about the antennas. Unlike USB Wi-Fi cards, all PCIe Wi-Fi cards have external antennas. The more antennas, the better the signal will be. Better and more reliable, but not necessarily faster.

Next, different antennas have a different range. If your router is close to your PC, it doesn’t matter which antennas the Wi-Fi card has. But if the router is, let’s say, more than 30 feet away, look for cards with high-gain antennas. Also, look for professional reviews and read user reviews talking about the range of the card.