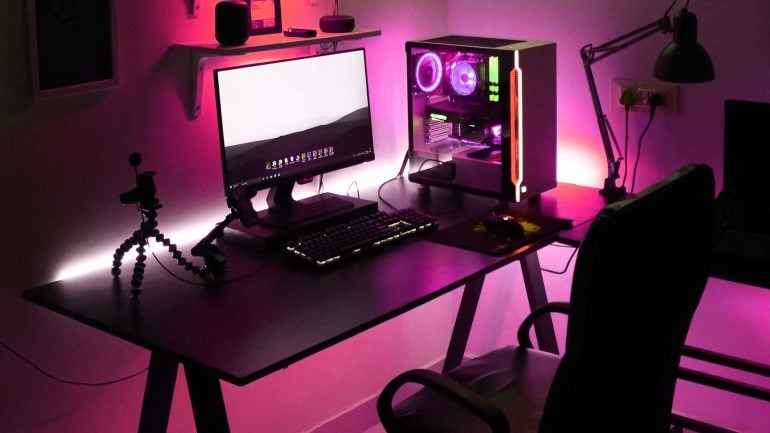 If you want to build a full-on pink setup, getting a pink PC enclosure is the journey’s first step. There aren’t that many pink cases, but picking the right one can be a pain since there are many similar designs out there. The issue is that most PC cases don’t come in pink, so you have to settle for lesser-known brands and models. That isn’t to say that there aren’t any quality pink chassis out there.

Today, we’re showing you the best pink PC cases you can get in five different categories. Most cases feature two-digit price points, making them perfect for budget builds, but we also have a couple of high-end picks for those wanting to go all-in on style. If you want a pink case, read on. 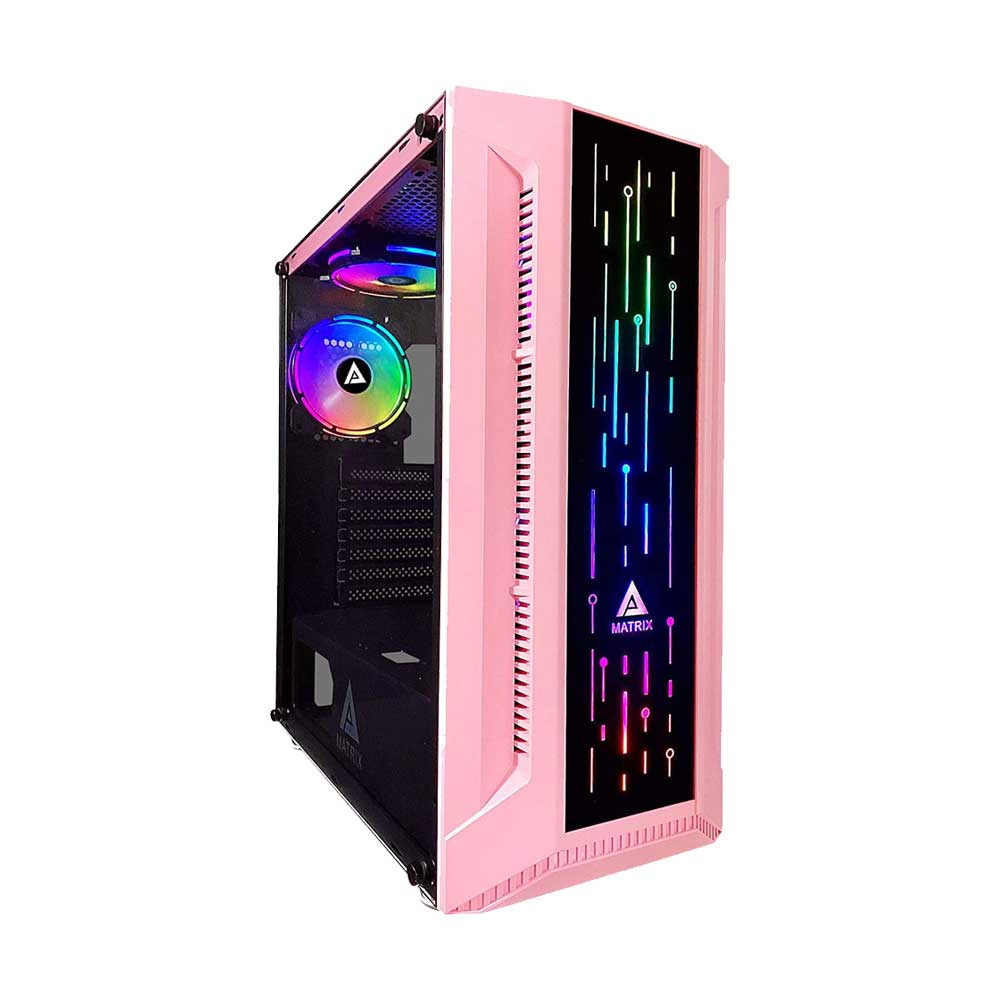 Having a ton of RGB is all the rage these days, but many RGB housings feature simple designs, with fans being the only RGB elements of the setup. This can look great, but in many designs, RGB fans at the front imply a tempered glass front panel, leading to less-than-ideal thermals. This is why we picked the Apevia Matrix-PK as our best pink case with RGB.

First of all, this case doesn’t feature a metric ton of RGB case fans. Instead, the Matrix features a stylish RGB front panel with large cutouts on the sides to provide respectable airflow levels. Inside you’ll find two fans on the front, one at the top and one on the back, which is more than enough.

The case’s spacious, and it can host a GPU up to 350mm in length and CPU heatsinks up to 160mm in height. Water cooling support is above average, with enough room for two 240mm radiators (front and top). The front I/O panel includes two USB 2.0 and one USB 3.0 port, two audio jacks, as well as an RGB control button, which is a pretty solid offering at this price point.

While the Matrix is easy to build in, cable management is non-existent. Make sure to have some straps on your hand before starting with the build. Also, the supplied fans (four 120mm units) use Molex cables and will spin at full speed all the time. If you want a better experience, think about getting aftermarket case fans. We have lists of the best RGB case fans as well as the best 140mm case fans that include more than a dozen great choices. 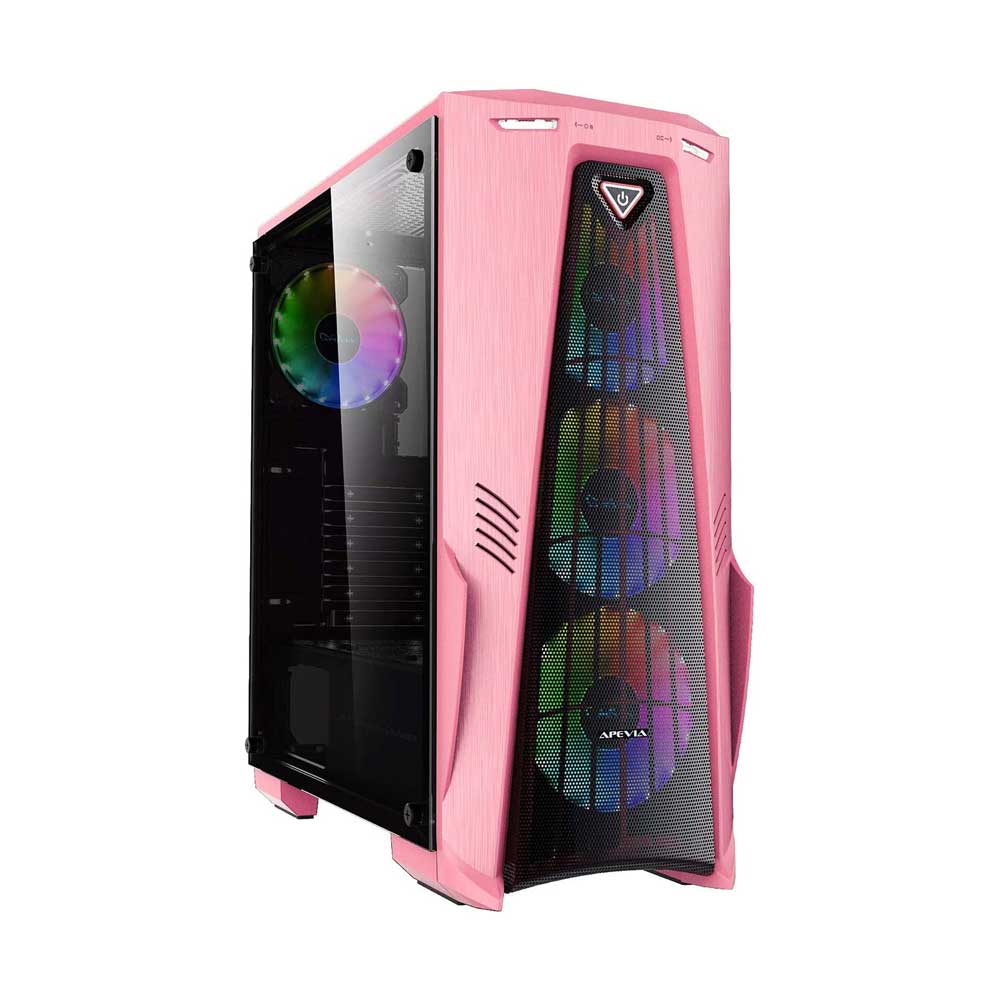 If you want to have excellent airflow, get a mesh PC case. And the Apevia Crusader-F-PK is just that – a mesh case with solid airflow and a ton of RGB. The chassis comes with four preinstalled RGB case fans, and while the chassis doesn’t have a full mesh front, the airflow’s great. The fans are bright and have saturated colors but can be pretty loud, so get some quieter fans if you want to have high airflow and silent operation.

While the case has high airflow, it’s not builder-friendly. You have little room to wiggle when installing components, and the back of the case has below-par cable management. GPU clearance is 350mm, CPU heatsink can go up to 165mm in height, and you can install a 360mm radiator on the front and a 240mm AIO on the top.

Note that the top side has a dust filter, limiting the airflow if you decide to install a case fan there. Luckily, the filter’s removable. The Crusader has enough room for up to four storage drives (two 3.5” and two 2.5”), and its front I/O comes with two USB 2.0 and one USB 3.0 port, dual audio jacks, and the RGB fan control button.

Overall, this is a quality case, but its fans are loud, and cable management is plain bad. The Crusader has great airflow, it’s affordable, and is quite attractive. 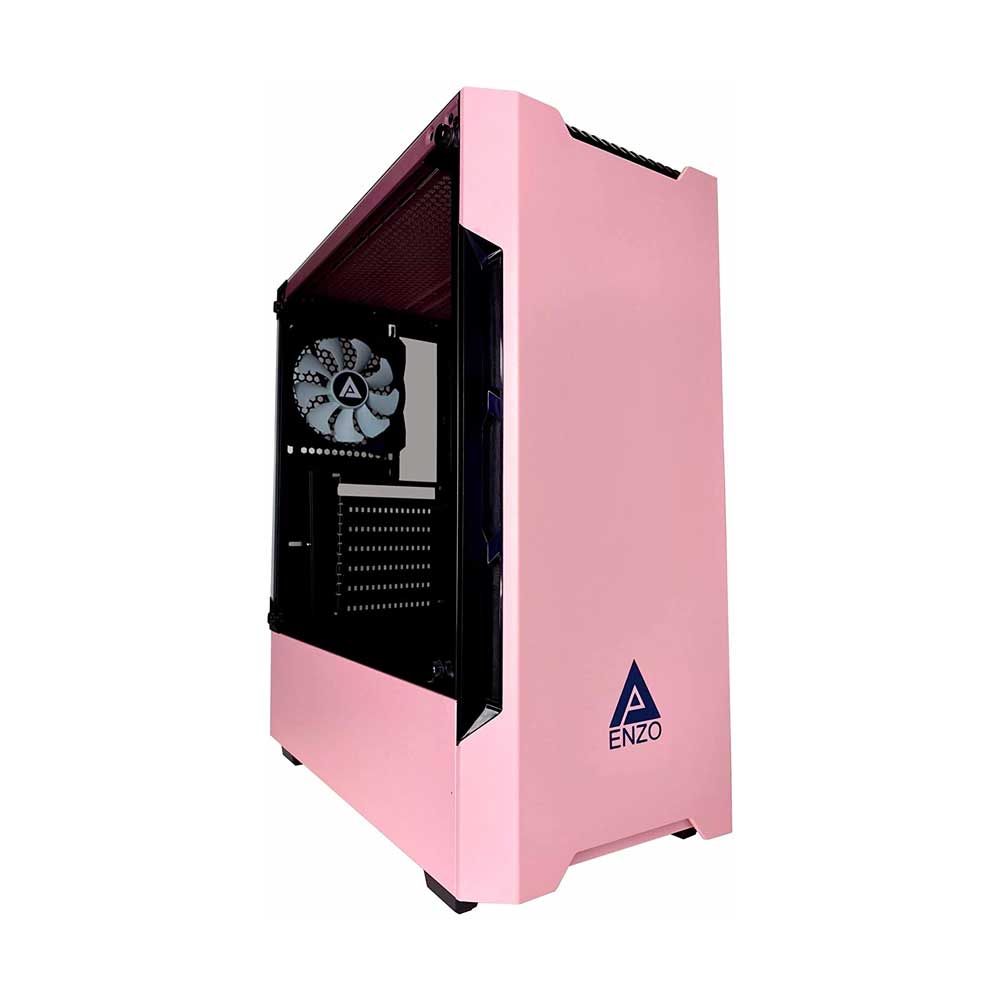 The Apevia Enzo-PK is the cheapest case on this list, notwithstanding our primary ITX pick. So, if you want the best budget pink case that also has solid airflow, check out this one.

First of all, the build quality is surprisingly sturdy. The chassis is made of glass & metal, except for the plastic front panel. The plastic used is sturdy and looks like it can take a beating and last for a while.

The side cutouts on the front panel should be enough for a better-than-average airflow. Just forget about putting case fans on the front. Cutouts are relatively narrow, and front-mounted fans will choke the air intake. It’s better to create a negative pressure flow by installing one fan at the top and keeping the rear fan.

And do remove the top dust filter if you’re going with a top-mounted fan in pull config. Overall, you can install six 120mm fans or five if using 140mm units. Water cooling support is average, with space for up to two 240mm radiators (one on the front and one at the top).

The design is down to earth, without a ton of RGB or unnecessary details. We like it, but we don’t like the prominent Enzo branding at the front. It breaks the otherwise minimalist philosophy of the case. The front I/O features two USB 2.0, one USB 3.0, dual audio jacks, and an RGB controller (if you decide to go with RGB fans).

As for the storage space, you have enough room for up to five storage drives (three 3.5” and two 2.5”). Finally, the case supports graphics cards up to 350mm in length and CPU coolers up to 160mm in height. 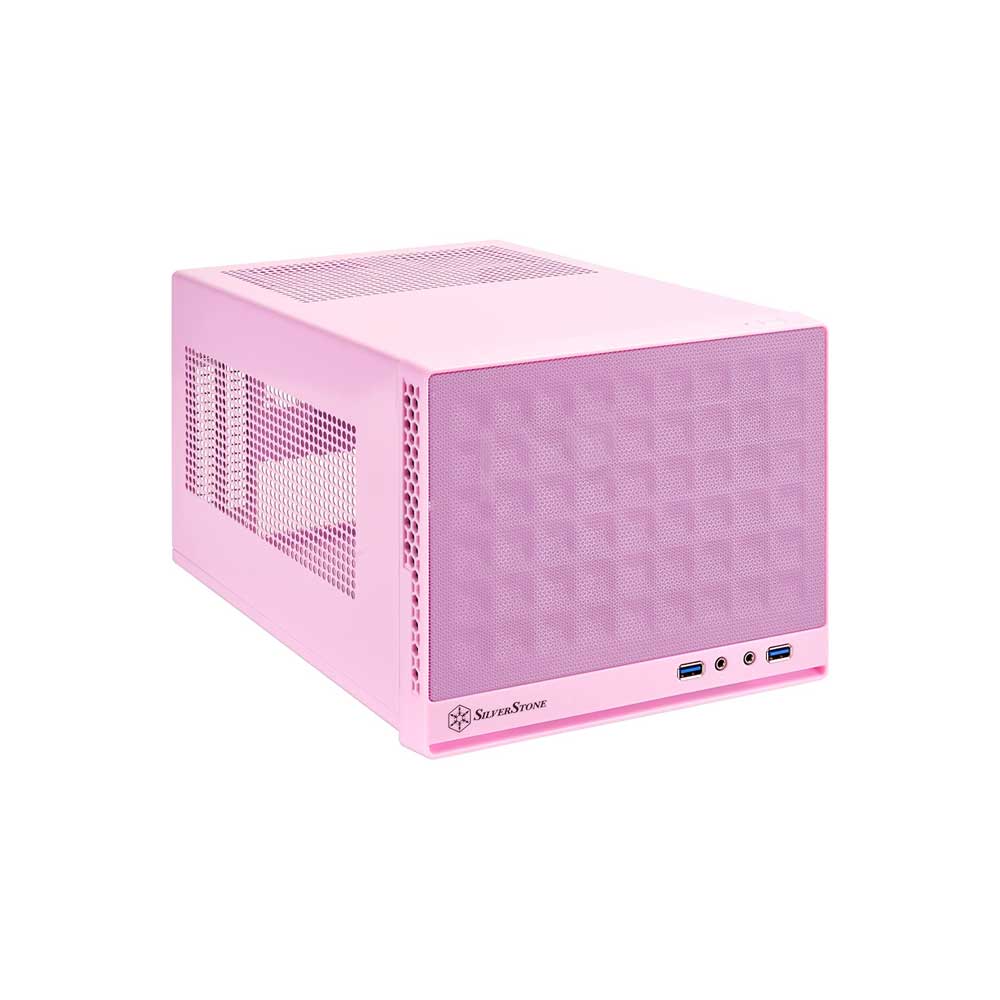 The SilverStone SG13P is our pick for the best pink ITX case. This budget housing simply screams pink. The chassis offers excellent airflow, an exciting design, and lots of room to build inside it. Spacious insides come with a cable management penalty, which is quite severe.

Luckily, the case doesn’t have see-through sides, so you don’t have to be extra tidy when building your next PC. Airflow is surprisingly good, considering the small footprint and lackluster cable management. It is probably thanks to its mesh front panels and lots of vents on the side, rear, and top, despite components covering most of these vents.

The case supports ATX power supplies, but you should go with an SFX PSU if you don’t want to pull your hair out while building the PC. We have a guide for the best SFX PSU if you need a quick recommendation or two. As for the front I/O, you have two USB 3.0 ports coupled with dual audio jacks.

There’s room for a single 120mm or 140mm case fan or an AIO, which is pretty limiting, but at least the airflow is more than decent, even without extra fans. You have enough room to put a dual-slot GPU up to 270mm in length, coupled with a CPU cooler that’s up to 61mm in height.

Overall, the SG13 is a barebones case, but it’s also very cheap. It looks rather attractive and features solid thermal performance for a mini-ITX case. 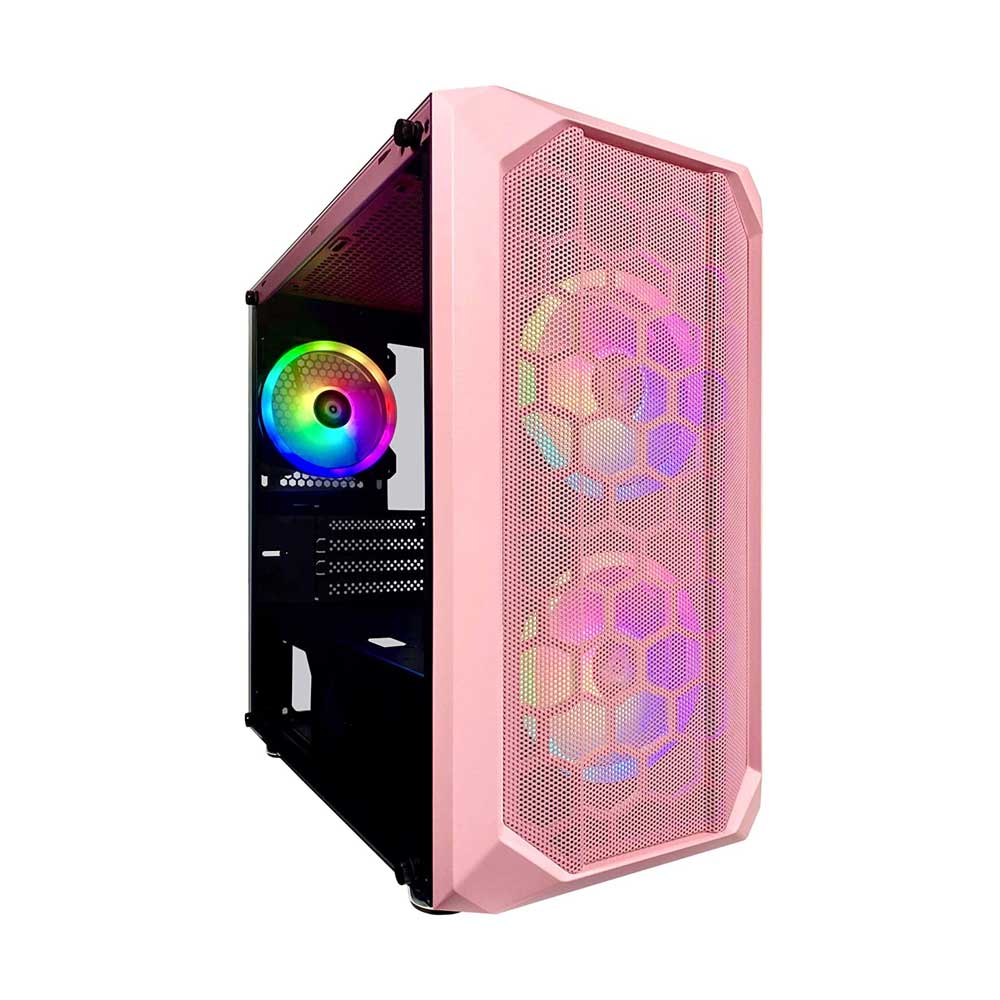 Last but not least, we have the best pink Micro ATX case for those looking for a compact enclosure but don’t want to switch to an ultra-compact ITX system. Again, it’s a case by Apevia, labeled Prodigy.

The case features an airflow design, with two pre-installed RGB fans on the front and one at the back. Add another one at the top if you want the best airflow configuration for this design. The chassis supports six case fans in total.

Moving on to the side, we have a tempered glass side panel and a cutout in the PSU shroud that should show off your PSU. The topside is vented and covered with a dust filter, which you should remove if you plan on installing a fan or an AIO on top for better airflow.

The front I/O is the same as on all other Apevia cases. That translates into one USB 3.0, two USB 2.0 ports, dual audio jacks, and the RGB control button. As for the clearance, you have room for a GPU up to 350mm in length along with a CPU cooler that’s 165mm in height, which are great numbers for an mATX enclosure.

The chassis can also house dual 240mm radiators on the front and top. Cable management is virtually non-existent, and despite it being able to fit a 350mm GPU, there’s barely enough room for an mATX motherboard, which means this isn’t a great case to work in.