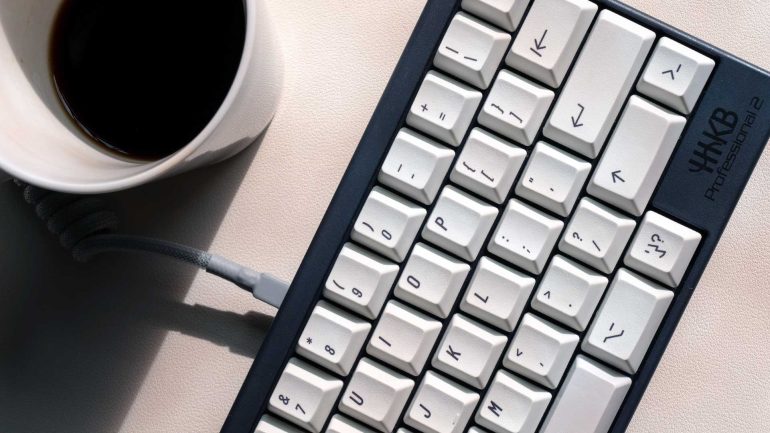 Overall, most Topre keyboards don’t have extra features or stuff like RGB lighting or a ton of extra buttons, but they do offer an excellent typing experience, and that’s what should matter the most. Now, if you’re looking for regular mechanical keyboards, do read our lists of the best 60% keyboards, best 65% keyboards, and the best 75% keyboards. 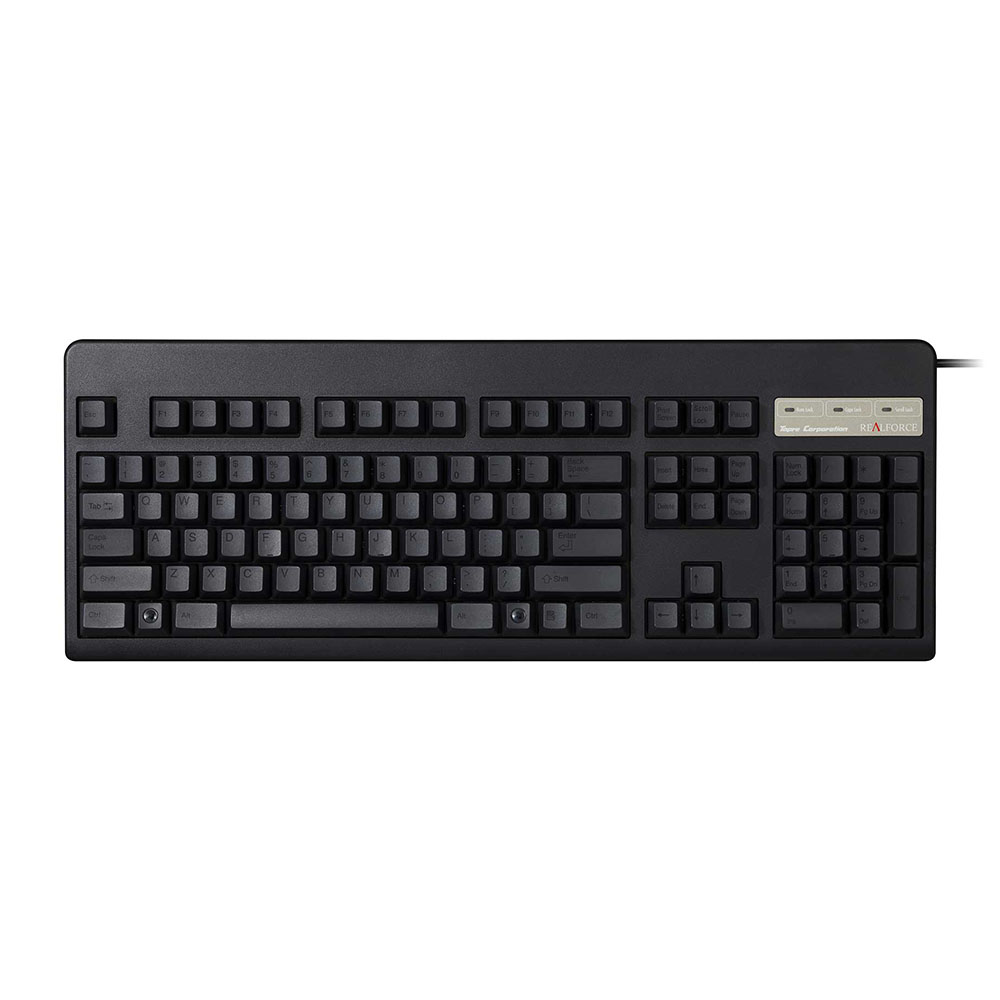 First on our list is the best full-sized Topre keyboard. It comes from RealForce, Topre’s keyboard manufacturing brand. While the keyboard looks plain, like millions of cheap keyboards found in offices around the world, its magic resides under the hood.

While plain-looking, the body is made of quality plastic, and it’s very hard to flex. Overall build quality is excellent, and that stands true for every keyboard model made by Realforce. The keycaps are made out of PBT plastic and should last for a long time. Further, the keyboard doesn’t have any extra keys or functions. It’s pretty basic in its design.

But once you start typing on it, you should either love it or hate it. The typing feel is great, and while a bit mushy (that’s the hate part of the equation), the keys are more silent than the Cherry MX, and the tactile feedback is more pronounced. Overall, this should be a great choice for all who need a keyboard for long typing sessions on a daily basis.

When it comes to downsides, the one that first comes to mind is the dark grey lettering on black keycaps. If you don’t touch type, you might have trouble finding the right key after dark or even during the day if you’re inside a poorly lit room.

There’s no backlighting on this keyboard, and Topre switches have unique keycap stems. Replacing default keycaps with custom ones (which are in most cases designed to fit Cherry MX stems) is out of the question.

Finally, the RealForce 104UB includes different Topre switches, varied by their actuation force. This should reduce finger strain. But varied switches take some time to get used to. Some people prefer when all keys have switches with the same actuation force. In the end, if you don’t mind the plain design, no backlighting, very high price, and variable switches, this keyboard is a breeze to type on. 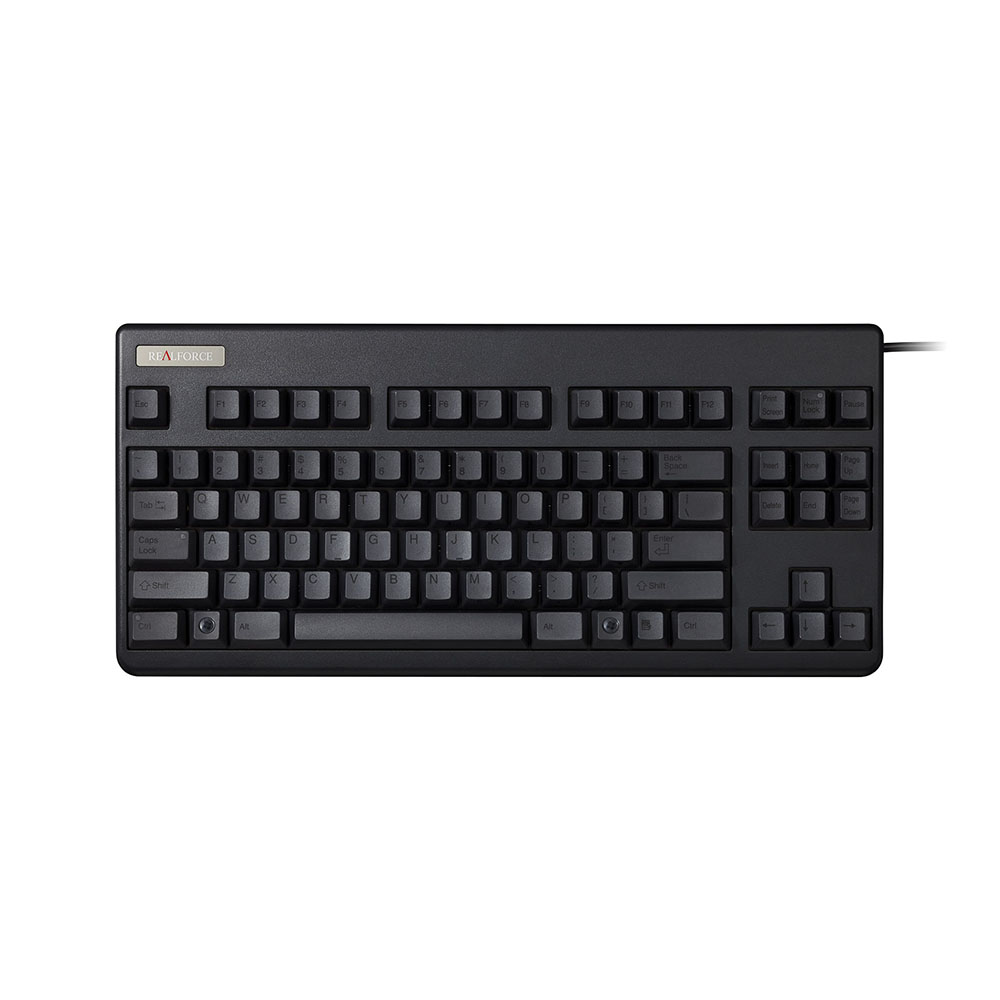 The RealForce 87UB is completely the same as the full-sized model aside from it not having the numeric part. In other words, expect superb typing experience combined with top-notch build quality.

You should also expect plain design, grey letting on black keycaps, no extra features, switches with variable actuation force, and a very high price. But if you’re looking for the best Topre TKL keyboard, this is the one to buy. It offers a better typing experience than most TKL mechanical keyboards. 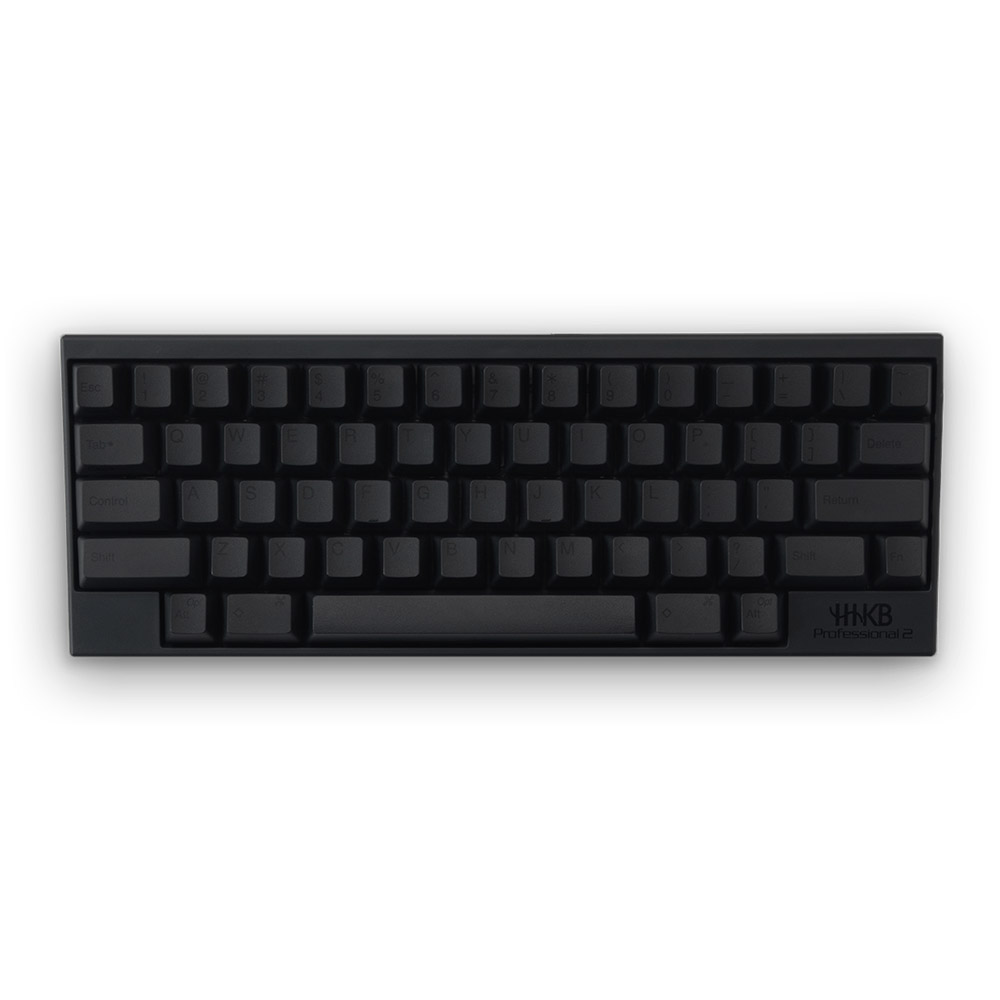 Now, if you’re looking for the best 60% keyboard based on Topre switches, the Happy Hacking keyboard is basically the only choice. While its unique key layout isn’t targeted toward typists, gaming and programming should feel great on this keyboard.

45g switches mean less finger strain during long typing sessions. And yeah, these keycaps are also black, with dark grey lettering. At least you can opt for the white version, which looks even better than the black one. There’s also the blank keys version if you are ready for an adventure.

When it comes to the build quality, this keyboard’s built like a tank. It has very little flex, is sturdy, quite heavy for its size, and with PBT keycaps on top of it that feel excellent when typed on. The keyboard includes a removable cable along with a USB hub on the back, which is nice to see. Overall, this is an excellent keyboard but only for those who don’t mind the irregular key layout. 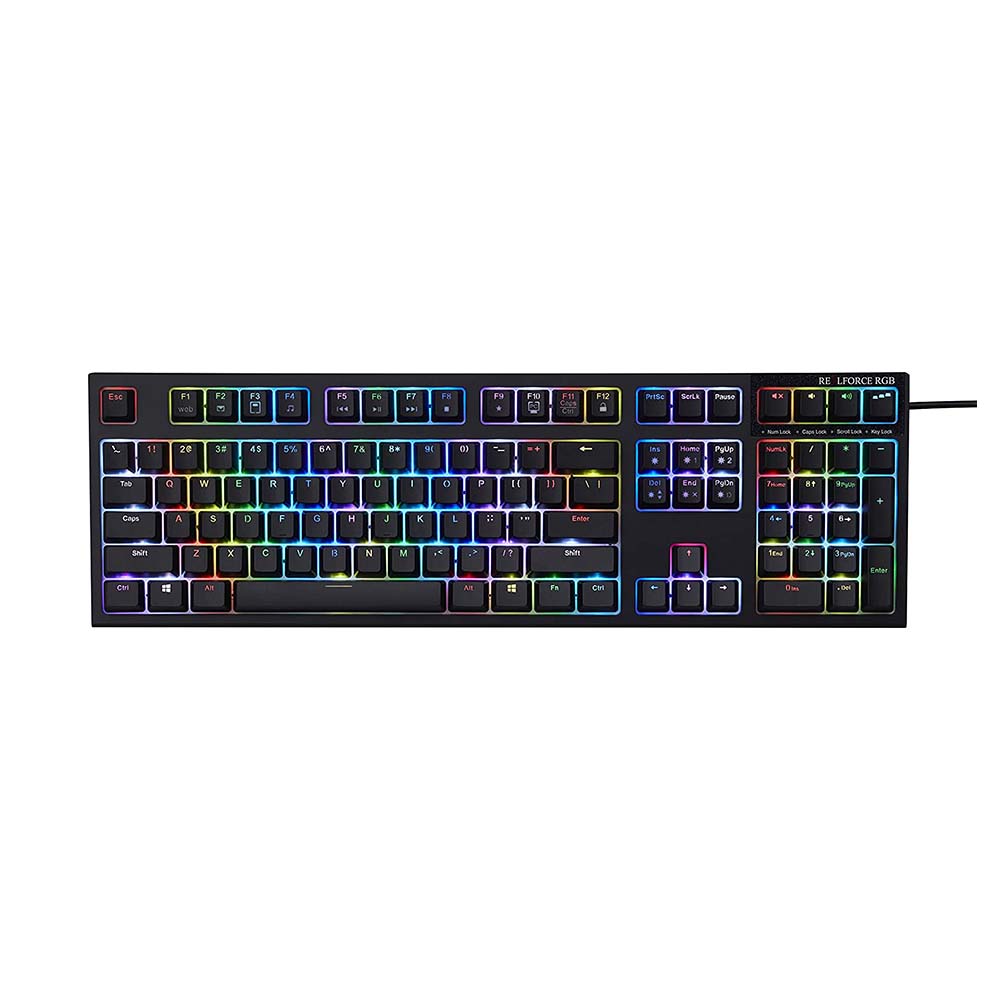 Those looking for the best Topre keyboard with RGB (or any) backlighting are out of luck. The only model that features RGB backlighting is the RealForce R2 RGB, and this is not a great keyboard. First of all, RGB lighting is average. It isn’t very bright, but at least the colors look nice.

Next, instead of PBT plastic, RealForce used ABS plastic, which is of lower quality. It has that cheap shine when used for some time, and it isn’t as pleasant to type on. Also, the keyboard is very loud when typing, mostly thanks to the ABS keycaps.

The build quality is pretty good, and 45g switches are a joy to use. The design even includes volume control keys, something you don’t often see on RealForce keyboards. Luckily, you can replace default keycaps with keycap sets that feature regular, Cherry MX stems. RealForce decided to equip this model with special Topre switches that have Cherry MX stems, which was the best thing they did.

Now you can just replace the keycaps, and you’ve got yourself a great RGB keyboard that’s a joy to type on. And since the full-sized version is much cheaper than the regular keyboard, even with swapped keycaps, the RGB model should end up cheaper than the one without backlighting. 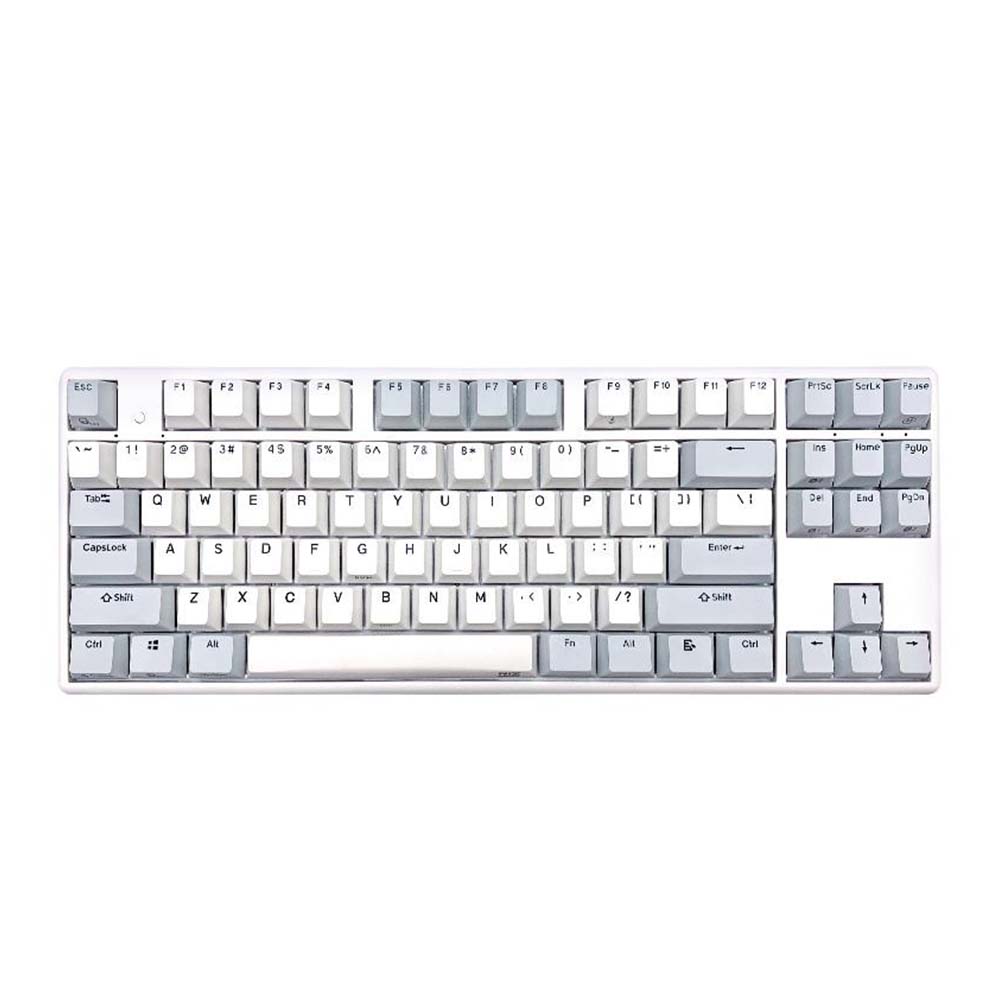 Last but not least, we have the best alternative to Topre keyboards in the form of the NiZ Plum x87. This keyboard uses Topre clones that feel pretty good. The feeling is very similar, but we don’t know anything about longevity.

Further, these keys’ actuation force is 35g, meaning they are even easier to press, creating an even better typing experience. On the flipside, keys are pretty wobbly, far from the perfectly stabilized keys found on Realforce keyboards.

Also, while the Topre clones used on this keyboard are very close to the real thing, they don’t have the firm tactile feedback found on original Topre switches. These are more in line with Cherry MX Browns when it comes to feedback.

Next, the keyboard features a removable cable, which is always a plus. The PBT keycaps feel great, but if you don’t like them, you can replace them with any regular keycap set since these clone switches use Cherry MX stems.

Overall, the NiZ x87 looks and feels excellent. These NiZ switches are a great substitute for Topre switches. Next, the build quality is great, and PBT keycaps are of high quality. Finally, the x87 is about half the price compared to other Topre keyboards.

What are Topre switches?

Topre switches are electrostatic capacitive ´keyboard switches. Their design consists of a rubber dome (like in membrane keyboards), which houses the system that utilizes a phenomenon called capacitance. This phenomenon allows the circuit board to detect a keypress without any physical contact between the switch and the circuit board. On the other hand, every mechanical switch works by closing a circuit between two wires during each keypress, which always includes physical contact.

The system housed inside the rubber dome contains the plunger along with the switch housing. The switch also includes the buckle responsible for the tactile feeling when pressing the switch. Finally, there’s the coiled spring. Once you press the key, the switch will bend the spring until the PCB registers the keypress. Quite different from the Cherry MX mechanism, where a keypress closes the circuit, thus registering the stroke.

This non-contact way of registering keystrokes makes Topre switches more reliable and longer-lasting than any other mechanical switch on the market. But since the rubber dome housing provides most of the feedback upon the keypress, many users see Topre switches as glorified rubber dome switches.