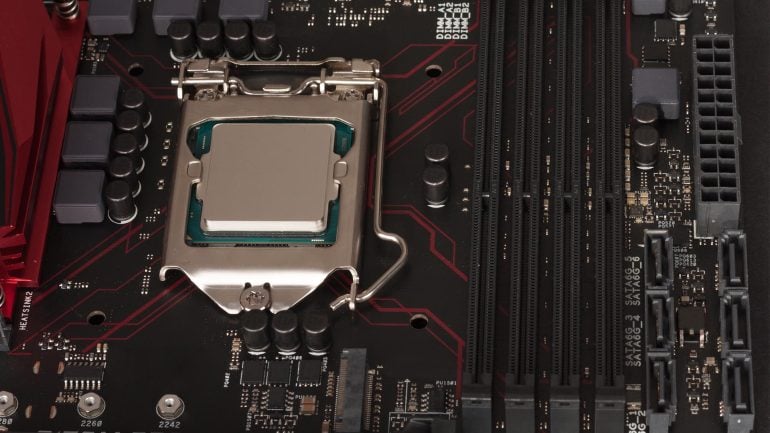 The Z390 chipset is the flagship chipset made for Intel 9th-Gen K series CPUs. While not in the spotlight anymore, some of these CPUs are still packing lots of punch. Models such as the Core i9-9900K and the Core i7-9700K can run all the latest games without issues and can be paired with cards such as the RTX 3080 without inducing a noticeable bottleneck. As for the motherboards, you have a nice selection of Z390 boards for every use case.

Below you can find our list of the best Z390 motherboards. Each of the picks comes with the best feature set in its price range. When it comes to the OC capabilities, every board here sans budget pick is capable of running an overclocked 9900K without issues. We’ve included budget, mid-range, as well as high-end boards. You can also find an mATX pick along with the best Mini-ITX Z390 motherboard at the end of this list.

Take a look at our Z390 motherboard list to learn more about the Z390 chipset and see the complete list of Z390 mobo models. If you’re interested specifically in the Core i9-9900K, check out our list of the best motherboards for i9-9900K. Finally, you can also read the best CPU coolers for i9-9900K article and see which coolers are the best for the i9 behemoth. 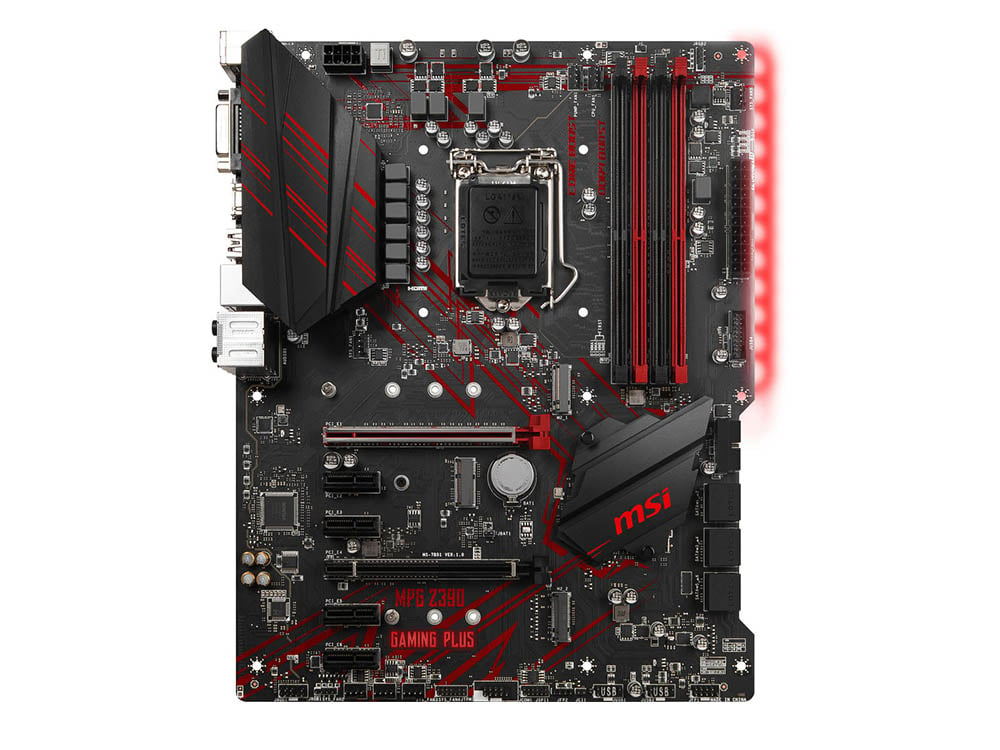 The MSI Z390 Gaming Plus is an excellent choice in the budget market and the best value Z390 motherboard. The 8+1 phase VRM isn’t the best, but it should serve the purpose of running a stock 9900K. The board has pretty good memory support and can run DDR4 memory up to 4400 MT/s.

As for the storage options, you have six SATA III ports and two M.2 slots. There are two PCIe x16 slots along with four PCIe x1 slots. The second PCIe x16 slot works at x4 mode, and it isn’t suited for a multi-GPU setup. The audio setup is pretty basic, with the Realtek ALC892 audio codec at the helm.

The rear I/O includes two USB 3.1 gen1, two USB 3.2 gen2 (one of which is USB-C), two USB 2.0 ports, a gigabit LAN port (1Gb), DVI, and HDMI ports, as well as a selection of audio ports. Not great, not terrible. The aggressive black-and-red design looks pretty good, and the board also includes a bit of RGB LEDs on the backplate.

Our choice for the best mid-range Z390 board is the MSI MPG Z390 Gaming Pro Carbon. This mobo offers a lot while keeping a relatively affordable price. It’s made for running the 9900K at 5Ghz or slightly higher, thanks to its 10+1+1 VRM design. The board supports memory up to 4400MHz DDR4, and it comes with 6 SATA III ports and two M.2 slots.

The board comes with gigabit Intel LAN (1Gb). The rear I/O features four USB 3.1 gen2 ports (one of which is USB-C), two USB 2.0 ports, and HDMI and DisplayPort, as well as the LAN port and a selection of audio jacks. 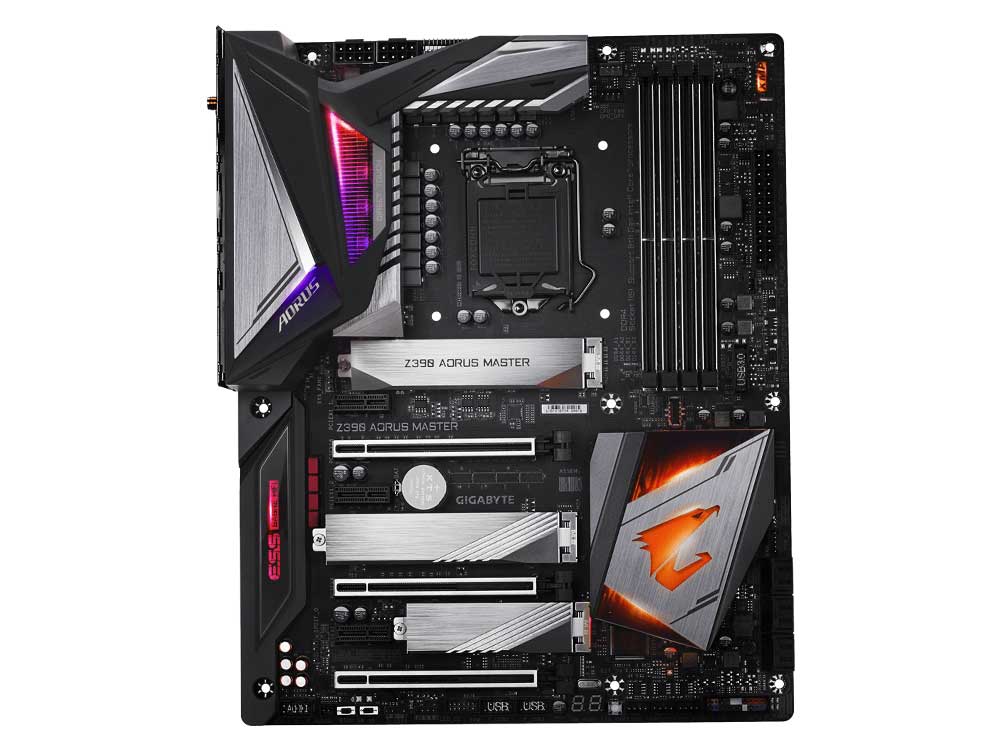 The high-end Z390 segment features a couple of excellent choices. Our pick for the best high-end Z390 motherboard is the Gigabyte Z390 Aorus Master. This is a flagship model, specced out to the max and suitable for serious overlocking.

The board features 12+1+1 phase VRM, enough for running the 9900K at 5Ghz or above. Memory support goes up to DDR4 4400 MT/s. Storage options include six SATA III ports and three M.2 slots, each of them having its own heatsink.

There are three PCIe x16 slots (x16, x8, x4) along with three PCIe x1 slots and support for both SLI and Crossfire. The board’s audio section revolves around the Realtek ALX1220-VB codec coupled with the ESS SABRE 9118 DAC, which is a solid solution for the price.

Connectivity options include gigabit (1Gb) LAN and a Wi-Fi chip with Wi-Fi 5 and Bluetooth 5. Rear I/O features four USB 3.1 gen2 (one is USB-C) ports, two USB 3.1 gen1 ports, and four USB 2.0 ports. The rear connectors also include the LAN port, one HDMI port, along with audio jacks and the power and Clear CMOS buttons.

Visually, the board’s quite attractive. There are plenty of RGB effects that don’t feel overly aggressive or cheap. Also, the combination of a black PCB and silver NVMe heatsinks looks striking. To see more RGB parts visit our guides for the best RGB case fans and the best RGB cases. 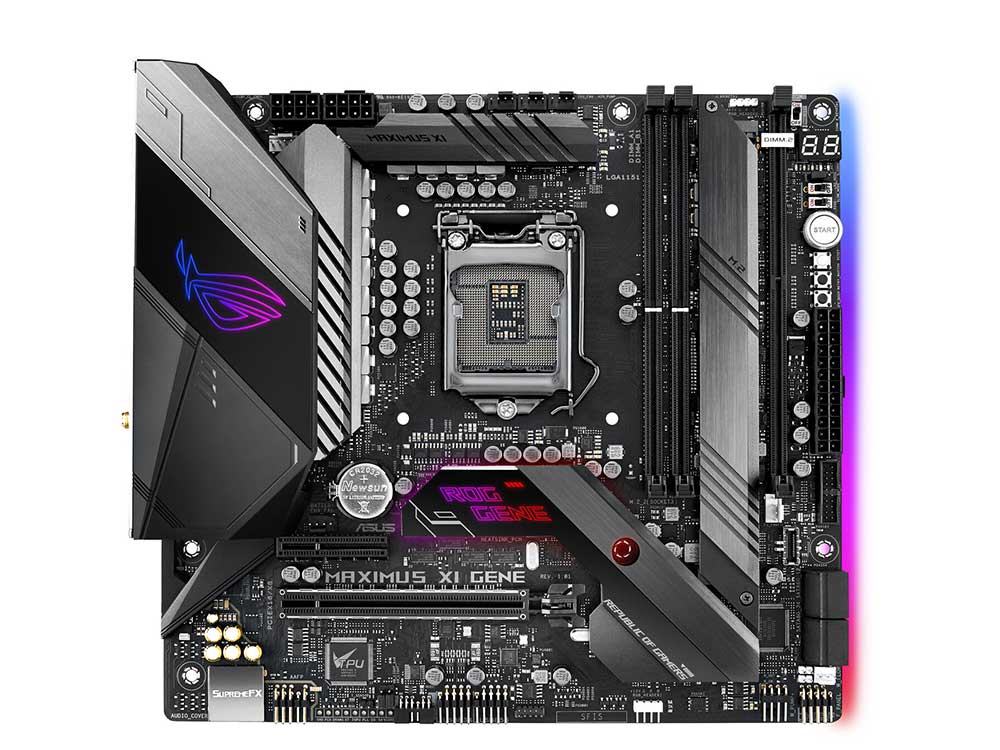 The mATX Z390 boards mostly fall into the low-end segment. However, the ASUS ROG Maximus XI Gene is everything except a low-end motherboard. This is by far the best mATX Z390 motherboard you can get.

The ROG Maximus XI Gene (Z390) is a feature-packed board with a 10+2 phase VRM that should handle overclocked 9900K without issues. This is a board aimed at users who plan on overclocking their CPU as soon as it’s installed, and its high price confirms that.

When it comes to storage, you have four SATA III ports, in line with other mATX boards. But where it gets interesting is the number of M.2 slots. The board comes with only two DIMM slots for memory, with support for up to DDR4 4800 MT/s.

The third DIMM slot can host a ROG DIMM.2 Module, which hosts two NVMe drives. The board itself has two more M.2 slots, putting the total number of M.2 slots to four. This is excellent news for users needing lots of fast storage, but it does mean you get only two DIMM slots for memory. Connectivity options include 1Gb LAN along with Wi-Fi 5 and Bluetooth 5.

On the rear, we find four USB 3.1 gen2 ports (one of which is USB-C), six USB 3.1 gen1 ports, two USB 2.0 ports, a selection of audio ports, a clear CMOS button, and a BIOS flashback button. Since this board is made for overclocking the 9900K, you also get the POST code, safe boot button on the PCB, as well as the power button, also found on the PCB.

The Mini-ITX Z390 market includes some interesting models, with the best ITX Z390 mobo being the ASRock Z390 Phantom Gaming ITX-AC. It all comes down to the VRM since you’ll probably use the 9900K. And this one has an excellent VRM that includes 5 phases, without phase doublers, and is made of quality components.

This allows the 9900K to work at 5GHz without issues. The VRM will run a bit hot but it won’t reach concerning temperatures. Other features include support for up to DDR4 4500, two M.2 slots, and four SATA III ports, with a massive heatsink above the primary M.2 slot. Expansion slots include just one PCIe x16 slot, in line with other Mini-ITX boards.

The board comes with a 1Gb LAN along with a Wi-Fi 5 chip that also offers Bluetooth 5 connectivity. The audio section rocks for such a small board. The Realtek ALC1220 codec is at the base, with the SNR DAC and an Amp helping it to deliver an excellent audio experience. Finally, the front panel audio connector includes a NE5532 headset amplifier with support for up to 600 Ohm headsets.

The rear I/O is packed to the brim. You get four USB 3.1 gen2 ports, two USB 3.1 gen1 ports, one Thunderbolt 3 port, the usual array of audio ports, and a DisplayPort and HDMI combo. Overall, this is a perfect mini-ITX board for 9900K-based SFF gaming builds. It can also be a great basis for an HTPC thanks to its great audio section and lots of storage options.