The bHaptics TactSuit pushes VR immersion to the next level, literally 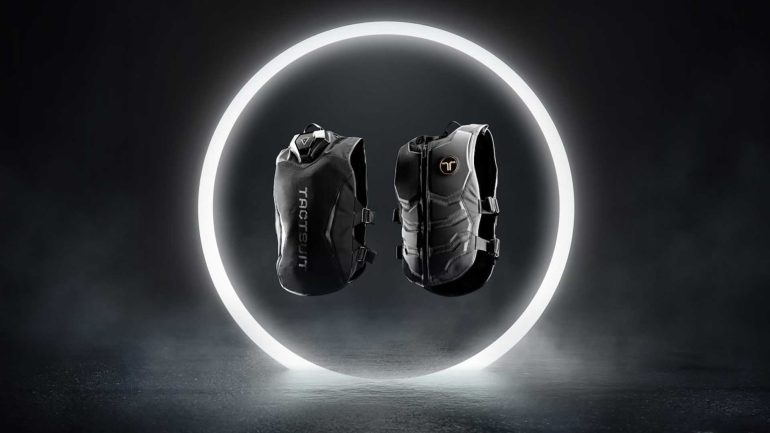 If you keep up to date with Virtual Reality (VR) news and developments, you’ll be aware that we are literally living in the future. From dynamic virtual reality games & experiences you could waste days exploring to real-world applications that make the wildest fantasies of ‘80s Sci-Fi look antiquated, it may seem as if Mixed Reality (XR) technology is reaching its golden age.

As virtual reality technology continues to advance, haptic feedback appears to be the next great revolution. Haptic responses in gaming are nothing new – after all, you’ve surely held a vibrating controller before, right? But, instead of just experiencing VR experiences through sight and sound, haptic feedback technology allows the experience to exert itself back on you through the sensation of touch.

There are a bunch of exciting start-ups exploring this emerging sector, previewing projects that will transform your VR experience. But it just so happens that South Korea-based start-up bHaptics are the forefront of VR’s next great frontier, and they have recently launched one of the most impressive Haptic devices available currently.

The promise of bHaptics’ TactSuit is simple: it will let you “feel a snake swirling around your body, shocks from gunshots or the gentle hugs you’ll share. The combination of various haptic patterns using 70 individually controllable haptic points mimics the real touch more closely than you’ve ever imagined before.”

South Korean start-up bHaptics launched the first iteration of the TactSuit early in 2020, which consisted of the Tactot vest and Tactosy arm, as well as face, hand & feet units. Together, the original TactSuit series of devices connected via Wi-Fi, allowing supporting games to deliver touch responses to in-game stimuli with next to no latency.

The TactSuit does this with the help of a total of 87 feedback points which feature rotating mass vibration motors: seven on the face, twenty on the front of the vest, twenty on the back of the vest, and twenty on each arm. These feedback points are triggered by events in-game, like a gunshot or a punch, which activate the nearest touch point(s) on the suit. Furthermore, the developer implemented an ability for the suit to translate environmental noise into subtle vibration, meaning that you wouldn’t just hear the ferocious roar of an approaching monster – you’d feel it, too.

However, the first TactSuit faced a couple of significant limitations. All in all, the original TactSuit was expensive – launching at $500 for each compatible unit. Although this is significantly cheaper than other VR haptic feedback devices (the elliptical-style mechanism which simulates digital walking comes to mind), it’s still a significant investment for the average joe. Secondly, for that amount of money there weren’t a significant number of compatible games: while a select few were natively supported, others were provided mods which implemented haptic feedback to different levels of success.

The result of these two factors was that the original TactSuit’s impressive haptic feedback capability was adopted by location-based entertainment (LBE) providers across the globe, but missed out on commercial domination.

bHaptics decided to up their haptic feedback suit-game a few months after the release of the original TactSuit. The reason for doing so was simple: the South Korean start-up decided to address some of the key critiques fans had of the original. Namely, they added more haptic feedback points, increased the battery life, widened support and introduced an entry-level model to make the software more accessible.

There are two variants of the TactSuit X Series. The TactSuit X16 is an entry-level model of the TactSuit X, but doesn’t contain as many ERM motors as its more expensive cousin – it has only 16. On the other hand, the TactSuit X40 has more than twice the ERM motors of the cheaper variant and seems to be aimed at enterprise clients, developers and LBE providers. There are a couple of other differences between the two, namely that the X16 seems significantly slimmer and shorter. Developer bHaptics claim that this is by design, with the lightweight, breathable material ensuring that you aren’t burdened by the device when you sit down to play PC VR titles.

The bHaptics TactSuit X series also include an audio port, Bluetooth 4.0 connectivity and new straps on the sides and shoulders for a better fit. The new models also expand on the original’s Audio-to-Haptics technology. Via a wired connection, they now support full, two-channel stereo haptic feedback – meaning that you can even use the TactSuit to some degree with titles that aren’t natively supported. Both versions also have expanded battery lives, with the X16 lasting for 22+ hours from full charge and the X40 lasting over 18.

This is Blerp and it’s essential for streaming on Twitch

But out of the gate there are over fifty natively supported titles including Space Junkies, Onward and the fan-favourite horrifying Phasmophobia. The community is also releasing compatibility mods for the most popular virtual reality titles too, so you’ll surely never run out of games to play. Currently, there are mods available for Half-Life: Alyx, Skyrim VR and Fallout 4 VR.

Best of all, bHaptics have developed the ‘bHaptics Player app’, which allows users to explore in-depth customisation options to make sure that your haptic experience is really your own.

Where can I buy the TactSuit X?

Pre-orders for the devices opened all the way back in December, and the official bHaptics Store website claims that the Estimated Ship Date for the TactSuit X16 & 40 is the 25th of March 2021.