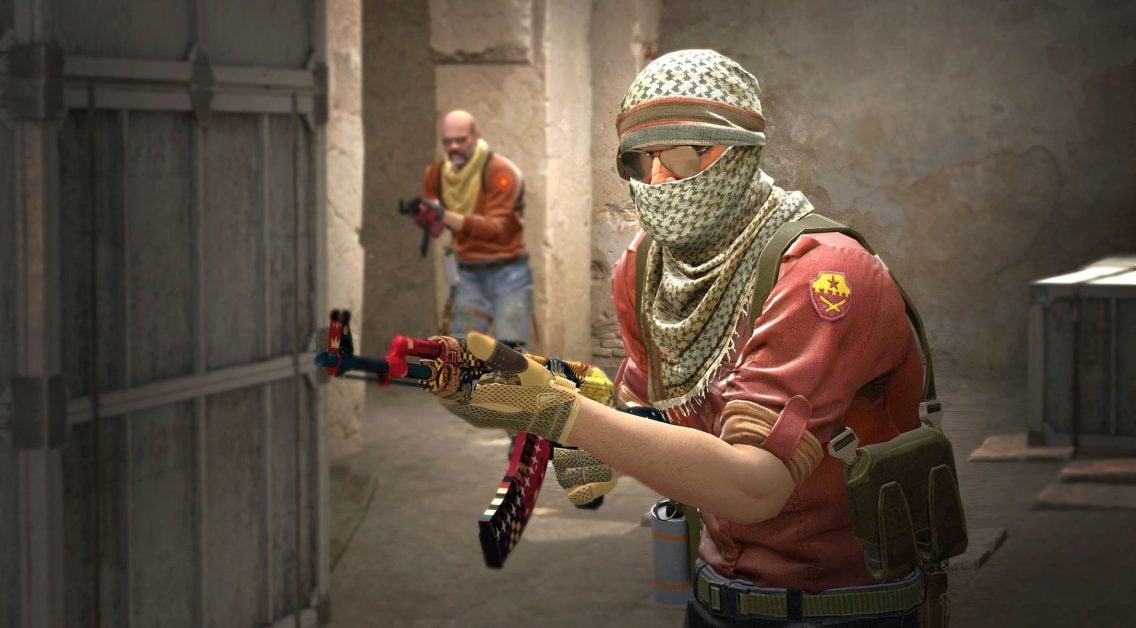 Counter-Strike: Global Offensive, the fourth game in the series, was launched in 2012 and followed the gameplay left by its predecessors by being a multiplayer shooter played in first-person. Each match comes with specific objectives rather than just letting the players do what they want.

Two different factions (Terrorists and Counter-Terrorists) fight each other in various game modes. The most common is Counter-Terrorists having to defuse a bomb planted by Terrorists, or Counter-Terrorists having to save hostages kept by Terrorists. But there are a total of nine game modes, with one involving a battle royale or the really serious Competitive mode pitting players of equal rank against each other in a series of matches. Except for the specifics connected to the game mode and the different objectives given, the gameplay is almost the same everywhere. At the end of each, money (in-game currency) is awarded based on your performance.

The matchmaking allows players to play on specific servers featuring an anti-cheat system to prevent cheating. It is also possible to play on community-made customized maps. It is possible to play offline with most modes, and bots will replace teammates and enemies. The game has been free-to-play since 2018, and part of the skins created by users are included in loot boxes, and the creators receive a cut. This system has even created a virtual economy in-game that, in turn, created a whole system based on gambling and betting. Global Offensive is also really popular in eSports and until today is still one of Valve’s most successful and popular games (if not, the most popular).

Time to look at the current Counter-Strike: Global Offensive statistics and facts, the last installment of a franchise that left its imprint in the industry. Speaking of the industry, our video games industry statistics will make a great read if you enjoyed this piece. So, check that out too!

Terrorists or Counter-Terrorists, it does not matter. Players are here to blitz through the maps, shooting the enemies, covering for their partners, and enjoying the tension of a good match. Connoisseurs will tell you: CS: GO is not just about going “pew pew.” A good marksman also needs strategy, which is what makes the matches that enjoyable. No smurfing, no camping, and no cheating allowed!

It does not come as a surprise that women represent a minority. It aligns with the fact that men in MOBA and shooters represent a minimum of 70% of the population, as their sense of competitiveness favors those kinds of games. Nevertheless, women are starting to watch eSports way more, with a jump from 15% to 30% in recent years. However, they still do not engage as pro-players because CS: GO is not a world known to be friendly toward women engaging too seriously.

The poll was conducted in the United States, Great Britain, France, and Germany. Surprisingly, contrary to what we might think, it seems like players are willing to experience diverse experiences with multiplayer and not stick with just the one MMO. But at the end of the day, they have their favorite. When it comes to the reasons why players start with CS: GO, a lot of them wanted to better themselves, but it is not said if the priority was on getting better at video games or just trying to become a better person by interacting with a bunch of strangers in different situations. Few people started just because they were bored, which means that people usually come with prior information and a strong will or curiosity about the game.

From 2014 to 2018, CS: GO has experienced a slow and organic rise in players. 2019 took it to a whole new level by reaching 20 million active players per month. The industry keeps a close eye on its numbers as the game has its ups and downs but always manages to get back on its feet. Twenty million monthly active players is pretty consistent with CS: GO, and even when they start losing players, they end up regaining their momentum. Players never stay away for that long, and Valve always finds a way to keep the interest alive by continuously feeding the community with new updates, new cosmetics, new battle passes, and of course, the professional scene.

With such success, everyone is curious about topics focused on revenues, profits, the number of downloads, and more information about the game itself.

4. In 2020, Valve reached the $1 billion threshold in lifetime revenues.

The big hole here is due to Valve keeping their numbers on the low and not revealing how much they are making precisely each year. But when looking at the number of players and the still-existing success CS: GO enjoys, we think that it is safe to say that they are making way more. The free-to-play model seems to suit as they make good money from different microtransactions, but the most loved of them all is, of course, the skins. Valve creates their own, but a few selected artists from the fanbase also get the chance to put their designs on the market, and players are crazy for those. Not only are they in the Marketplace, but you will get a cut if your design is included in one of the crates awarded to winners after a round (and requiring a key worth $2.50 to be opened). It is so big that a whole economy has been built on these, and today, you can indulge in gambling and betting with skins.

5. The game has received over 15 awards and accolades.

When only considering the most prestigious ceremonies, we can see the game’s worth has been recognized but not rewarded. The game keeps accumulating nominations without really getting the big prize. Of course, it has won smaller awards like the Steam Awards.

Time to take a closer look at how the community consumes the game. The implementation of cosmetics was Valve’s most ‘eureka’ moment as it has even developed its own economy.  Plus, the matches make for some outstanding entertainment for viewers.

Those results used a pool of 7 million players, and the first 20 countries represent 70% of the total player base. Based on the comments from some users, there is a particular discrepancy between how much the game is played in their country. Still, the professional is almost invisible or non-existent. That would mean that they are more on the casual side. But there is also the fact that eSports is not fully recognized as a legitimate discipline everywhere.

7. 49% of players only play CS: GO and do not watch streams or tournaments.

It is pretty huge that almost half of the fanbase does not have any interest in the eSports scene because it is the best right now. And has been for a while. But it is also understandable when you see that people started playing CS: GO because they were competitive and wanted to prove themselves. If that is the most common mindset, you can bet that, yes, they would have a limited interest in watching a bunch of other players doing what they want to prove themselves.

Objectively, it is not that bad a rank on Twitch. However, for such a big game with such a big following and a major eSports scene, not even breaking into the top 10 is unexpected. CS: GO is not even among the most-watched video games streamed on Youtube Gaming. It is even more of a mystery when you see the number of hours watched in a week and how many viewers there are on average: it is not rare to find several active streams, but it is not good enough?

9. The highest number of concurrent players on Steam was 1,305,714 in April 2020, making it the second game on Steam breaking a record.

Part of 2020 was spectacular for CS: GO as the game would pull in over 1 million players month after month. So when the game went back to numbers around 500,000 to 800,000, people were quick to talk about its decline and its soon-to-arrive death. But, after nine years, the title is bound to have ups and downs, and a lot of what is qualified as “downs” are above-average numbers. Even more so when you know for how long CS: Go has been around.

With his team-based, fast-paced, shooter-style gameplay, CS: GO has everything needed to ensure an exciting tournament. The opportunity was evident, and Valve jumped on it. The company was already used to it through Dota 2 and other titles from the Counter-Strike series. Hence, the game has been at the forefront of the eSports scene, dominating ever so fiercely and not ready to let newcomers take their place.

CS: GO has been around for a while now as the game is a major heavyweight in the industry. Valve saw potential and seized it as soon as possible, and it paid off as the company is now dominating the eSports with its two bigger games being at the top of the circuit.

11. The top 5 of the players with the highest-earning is dominated by Denmark.

All those players are part of Astralis, one of the best teams on the CS: GO circuit. Most of that money has been earned when representing Astralis, which shows that they have an excellent synergy as a team. As we can also see, they all have been playing for quite a while, with some of them being professionals since 2012 and approaching their thirties. Which, with eSports, is most of the time the moment players retire. The Ukrainian player s1mple is the first one to break Denmark’s supremacy.

12. Denmark dominates the circuit with its $17,863,487 earned, making it the country with the highest sum of money awarded.

Nordic countries are really in their element with CS: GO, occupying up to 3 of the places in the top 10. As seen before, even if they are the first when it comes to ratio, they are all you can see when looking at the number of players in 1 million citizens. Surprisingly enough, CS: GO is something South Korea never felt invested into.

CS: GO is a bit of a mystery: when looking at the game, it isn’t easy to decide whether it is intrinsically good or if skins are doing at least 60% of the work. They are so crucial that some accounts have been reported to be worth thousands of dollars just because of the skins owned. A whole system of betting and gambling exists, with skins at its center. It is to the point that certain countries even banned such websites and the loot boxes in-game as they were actually going against gambling laws in those countries (namely the Netherlands and Belgium).

However, with Valve and their policy to keep their numbers secret as much as possible, it is impossible to determine exactly how much they make from microtransactions. Still, when you see how much skin creators earn for less than 20 skins, it is easy to imagine the millions Valve must be raking in.

Apart from that, on the eSports side, CS: GO is just doing its own thing and has been for years. The tournaments are still really successful, and the prizes make many players want to be part of the professional scene. With controversies such as pro players betting on themselves or Valve canceling two essential tournaments, this community side is still doing very well.