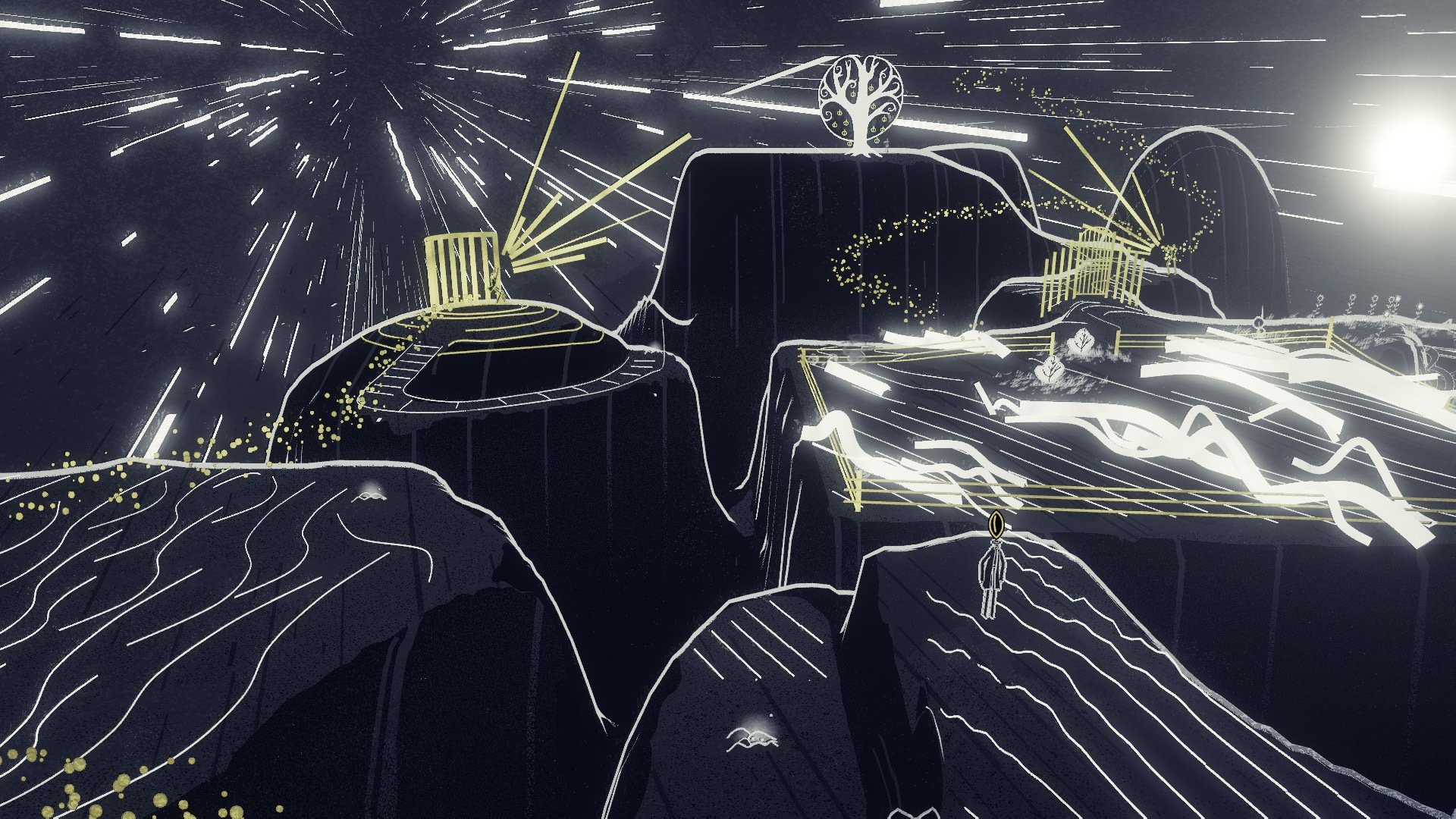 Genesis Noir review – a brief history of time and space

The game is visually breathtaking, but it also offer an amazing story-driven experience.

Lost love, an unsolved murder, lots of alcohol, and all that jazz. Yup, Genesis Noir is filled with film noir references. The thing is, the game also includes the Big Bang, playing with fate and the nature of time, and testing the limits of your godly powers. Oh, and it also looks otherworldly good. But just how good this epic tale that spans the entire history of space and time is?

Genesis Noir’s main attraction (aside from its story) is its unique visual design. Highly stylized graphics combined with a two-tone color palette allow the game to immediately take one of the empty memory drawers in your brain. Even when you forget everything else about it, Genesis Noir will tingle your neuron connections with its charming looks.

If it were a reward for the most unique-looking game of the year, Genesis Noir would surely be among the favorites. And the stylized visuals work wonders for the game. Starting with the mundane first level and continuing across extremely diverse locations, Genesis Noir is one of the prettiest rides you can hop on in the current gaming market.

The game’s strong noir visual identity combined with cardboard-scenery-like models will pull you into its world of science, gods, and solving a crime where the perpetrator is known before the investigation even started. The only negative we have regarding the game’s visuals is this flicker effect that can bother some players. Luckily, you can turn it off.

Exploring the space and time accompanied by sweet sound of Jazz

You play as No Man, a watchmaker (and the God of Time) who fell in love with Miss Mass, a famous singer at the local jazz club, and another god. After arriving at her place for another night of romance and booze (the dude’s clearly an alcoholic), you find her being held at gunpoint by Golden Boy, her new lover. Seeing this, you suddenly stop the time, just a moment after the bullet left the barrel. This moment is where the real adventure begins.

You’ll start suspecting No Man is more than a watchmaker since he’ll quickly find himself at the beginning of time, trying to find a way to stop the murder, and the Big Bang, from happening. His solution? Creating a black hole and stopping the Big Bang in its infancy, or something like that.

The game’s made out of relatively small levels that explore the course of events spanning the entire history of space and time. It all starts with the birth of light and gravity and ends in the distant future, where the human race struggles to survive. In between you’ll play the invisible hand of evolution, will slam planetoids together to form new solar systems, and will also be at the front row of a live saxophone gig. The game also includes planting the seeds of creation, providing inspiration to a human scientist, as well as some good old jamming.

No Man will also visit humanity in various stages of our development. Playing the role of an otherworldly visitor who, most of the time, helps humanity in one way or another. While his end goal is to gather the ingredients needed for the black hole creation, fate (maybe) has other plans in place for the Time God. What plans? Play the game and find out. If you like space, noir movies, or just a good story, it’ll be worth it.

In between you’ll be served with bits and pieces of No Man’s memories, putting some context into his quest. Still, even with showing you memories and lots of the background story, Genesis Noir remains light on explaining the whole thing. Storytelling here is visual and musical, without reaching for those nasty words. A form of communication created by puny creatures known as humans. On the one hand, we salute this since not many games let players connect the dots on their own.

On the other, this freestyle form of storytelling may leave you with more questions than answers after the curtain falls. Replaying the game from the beginning is a great way to again enjoy the excellent music and sound effects, as well as to connect the missing dots from the first playthrough. Genesis Noir can be finished in two afternoons so we recommend everyone engrossed in the game’s story to give the game another spin after beating it the first time.

The music and soundtrack play a huge role in Genesis Noir since the game’s almost completely devoid of any voiceovers. Jazzy tracks are a perfect fit for this particular game; their progressive melodies fit well with the slightly chaotic nature of the game (we’re talking about the Big Bang and space and time here, after all). Calmer passages, on the other hand, do a good job of reflecting No Man’s emotions during flashbacks of happier (and alcohol-filled) times he spent with Miss Mass. If there’s a game that deserves a quality pair of speakers or nice-sounding headphones, it’s this one.

When it comes to gameplay, Genesis Noir is technically an adventure game with a collection of simple puzzles. Most chapters include a couple of simplistic puzzles that are, despite their trivial difficulty, interesting to solve. It’s because they all utilize some form of repetitive actions, embedded with pleasant and engaging audio and video feedback. In other words, a perfect way to get our primal brains addicted. These include popping bubbles, snapping branches, planting seeds, as well as other forms of repetitive actions most of us love doing.

You’ll solve most of the puzzles without breaking a single grain of sweat, but there’s a slim chance you’ll get bored. It’s because each puzzle is unique in its design and because most puzzles don’t repeat. Each chapter includes a unique set of “challenges” and once you move on, you’ll rarely stumble upon similar problems during later levels.

The two major issues with the gameplay side of Genesis Noir are the occasional need to hunt for pixels in order to activate a mechanic that will continue the story, or solve a puzzle. The game also missed a (huge) opportunity to enhance the audio and video feedbacks with controller rumble. With it, the game and its puzzle-solving experience would be so much better and more enjoyable.

The pixel hunting moments have no place in a story-driven adventure like this one, where the majority of the puzzles are on the level of those seen in walking simulators. It’s not as bad as in old-school adventures and it only takes place on a couple of occasions during the course of the game, but still. Finally, there’s a couple of puzzles that present a steep increase in difficulty compared to their peers. Again, not a big deal overall but still a strange thing to find in a game that relies on its story, and not gameplay, to drive players towards its end.

A (rather) brief (Hi)story of time

Genesis Noir is a short experience. You can finish the game in about five or six hours. But since the story is filled with so many cool moments, you’ll have a feeling the game is longer. We enjoyed its unique storytelling, film noir aesthetics, and dopamine-inducing puzzles. And we’re full of praise for its story that combines quantum physics, lost love, the history of humanity, ancient gods, jazz music, and time travel.

On the flipside, occasional vague depiction of events, a couple of puzzles that can get a bit frustrating, and those pixel-hunting moments won’t ruin the experience. They do leave visible dents, though. Combine the short time it takes to beat the game with these downsides and you get a diamond in the rough of the modern video game storytelling accompanied by one of the most striking visual experiences we’ve seen in the last couple of years.

As a standalone game, with its $15 price point, the game’s priced just right considering its length. If you want to get the most of the games you buy, consider waiting for a discount. That said, Genesis Noir came out on Game Pass day one. If you have Game Pass for Xbox or PC, get this game and play it, like right now. As part of the Game Pass offering Genesis Noir is a no-brainer recommendation. It will fill a couple of afternoons with a mind-boggling adventure across time and space, packed into one of the most unique visual coatings you’ll see this year (and that’s a guarantee), and accompanied by a striking jazz-infused soundtrack.