Find out the key points to consider when choosing a case for your next gaming build. 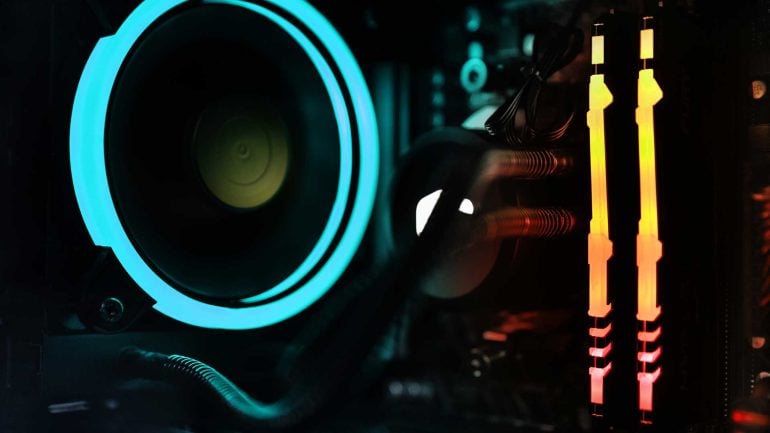 What you should look for in PC cases in general is one of the most critical things you can do when starting your gaming build. If you overlook the fundamentals then you will just be frustrated later on if you overlooked something. Yes, it could be as something as silly as the wrong case size or as something as serious as having to deal with a CPU constantly overheating.

Size isn’t all that matters but you should decide which form factor you need before picking your next PC case. Full tower PC cases are the biggest and can handle everything you throw at them. They are tall and chunky, and can host lots of storage devices. Further, they support AIO liquid cooling systems and multi-GPU builds. Even motherboards with multiple CPU sockets.

Mid-tower cases can take full-sized motherboards. Many feature plenty of room for all components along with lots of storage devices. They are the best pick for most users and as long as you aren’t a power user looking for the ultimate PC case, mid-tower cases are an excellent choice.

Micro ITX (or mini-tower) cases are smaller in size and weight. They are built specifically for builds based on Micro ITX motherboards. Mini towers usually come with less space inside for storage devices and are more cramped than mid and full tower cases. Some don’t even have support for a full-sized graphics card. Something to pay attention to if you’re looking for a micro ITX case.

Finally, we have mini ITX cases, super small cases built to host mini-ITX motherboards. They are quite popular these days for building compact gaming rigs or media centers. Users can place those below their TV, with rigs taking the same space as gaming consoles. While being excellent for compact builds, they come with lots of limitations. Don’t expect liquid cooling support in most models. Also, most mini-ITX cases don’t support full-sized video cards

It’s best to tuck away cables behind the back tray so look for a PC case with cutouts in the motherboard tray. Almost every model these days has cable management cutouts but it’s better to be safe than sorry.

Make sure your case has enough expansion slots for hard drives and SSDs. These should be listed in case specifications so be sure to check it before making the decision. Nowadays most cases feature a tool-less design for mounting storage devices. Some affordable models might need a screwdriver for mounting hard drives and SSDs. This is less of a priority if you don’t plan on moving your PC around often. For example to attend a LAN party in which you should consider looking into portable PC cases with handles.

Other notable features to look for

Not all cases are suited for liquid cooling systems, you have to check out specs to be sure your future case supports one. Next, most current case models don’t support 5.25-inch drive bays. If you really want a DVD drive in your new build search for a case that supports large drive bays.

How PC quiet cases differ from the rest

Regular PC cases offer better thermal performance in general. They have more room for fans and are built in a way that ensures efficient airflow throughout the case. Quiet PC cases, on the other hand, like the Silent Base series from be quiet! for example come with multiple design choices that put silence above everything else. They have sealed front and back panels and don’t have as many fans installed at the front, back, or top side compared to regular cases. Further, their air vents are designed to lower noise while providing solid airflow to the inside of the case.

This design leads to higher temperatures inside the case but the choice between high airflow and silent performance doesn’t have to be made in case you have some knowledge and time on your hands. This handy video guide from Gamers Nexus explains how you can construct a silent PC build and at the same time have efficient airflow.

Virtually every quiet case includes panels padded with noise damping materials. These materials, usually noise-damping foam, further block component noise. 140mm fans – which are generally quieter than 120mm fans – further damp the noise. There are also muffled vents for lowering noise even more. The brand be quiet! has its own line of fans that operate at lower noise than regular fans.

Finally, most silent PC cases come without glass side panels, since those can’t be padded with noise-reducing foam. While there are models with see-through side panels you should opt for metal side panels for the best results and the lowest amount of noise.

Tips for a quiet PC build

In case you’ve opted in for a quiet PC build getting a silent PC case is only the beginning. Here are some tips aimed at achieving extremely low noise levels with a silent PC build.

Water cooling is great at keeping temperatures at bay. The fact is that the best AIO systems provide noticeably lower temps compared to regular coolers. But water cooling can be noisy. The pump works non-stop. And as soon as you put your PC under heavy load the pump will get loud and those radiator fans will start spinning at high RPM.

Instead of going for a liquid AIO solution you should just get a massive, overpowered air cooler. Models like Scythe Ninja 5 or be quiet! Dark Rock PRO 4 provide excellent cooling performance with low temperatures while keeping it nice and quiet even under heavy load.

Lowering the noise of the graphics card is a bit trickier. You can search for a quiet GPU (scroll down for a list of sites that include noise levels in their hardware reviews) or get an aftermarket GPU fan. Something like ARCTIC Accelero Xtreme IV should do the trick for most GPU models around. Do note that the fan has a 300W upper limit meaning that some high-end video cards such as Vega 64 aren’t supported.

You don’t have to sacrifice airflow

Like we already mentioned, a quiet PC build doesn’t mean you should sacrifice airflow for the sake of low noise levels. If you want a case with low noise levels that also has solid airflow, get a high airflow silent PC case. Or, get ready for some DIY with the help of Gamers Nexus guide we linked above.

Bear in mind that, while they offer solid airflow levels, silent PC cases aren’t on par with the best classic PC cases. You can’t have it all.

There’s always the option of a high-airflow case. High-airflow combined with large case fans and top of the line CPU and GPU aftermarket coolers can provide almost the same levels of noise as a quiet PC case. But, once it gets hot outside and those fans start spinning faster you won’t have that sweet noise insulation foam around your case to lower the noise.

Pay attention both to noise level and quality

Getting the overall noise of your system low as possible is great, just don’t forget to watch about noise quality. Stuff like 120mm or smaller fans and hard drives might not get particularly loud. But, they can get annoying, especially HDDs once they start spinning.

Not all hardware review sites include noise levels in their reviews. If you want to have those it’s best to bookmark sites such as Gamers Nexus, Anandtech, Tech PowerUp, and KitGuru. These sites provide excellent, in-depth hardware reviews that contain those sweet noise levels.

Don’t forget about the PSU and try avoiding HDDs

Aside from fans and CPU and GPU coolers you should also focus on getting a powerful and quality PSU unit. High power output means less strain on the PSU. This leads to lower temperatures under load and thus lower fan noise.

There are also PSUs with semi-passive fan mode. Those are great for quiet PC builds since their fans don’t activate under low load. Some models we recommend are the Be Quiet! Dark Power Pro 11 or Corsair HX750i 80 Plus Platinum. Both offer superb reliability, high power, and low noise levels.

You should also avoid HDDs. Even the quietest models have moving parts and can become noticeably loud once they start spinning. Go with an SSD instead.

A few suggestions when putting it all together

When you’re first setting up your PC don’t get too giddy about closing it up and adoring it in all it’s glory too soon. It happens to even the best of us so make sure everything is setup just right. Boot it up, run it for a bit, install the necessary drivers, test some programs and a game or two. Only then should you screw the panels back in place. Save the yourself frustration and gain some peace of mind.