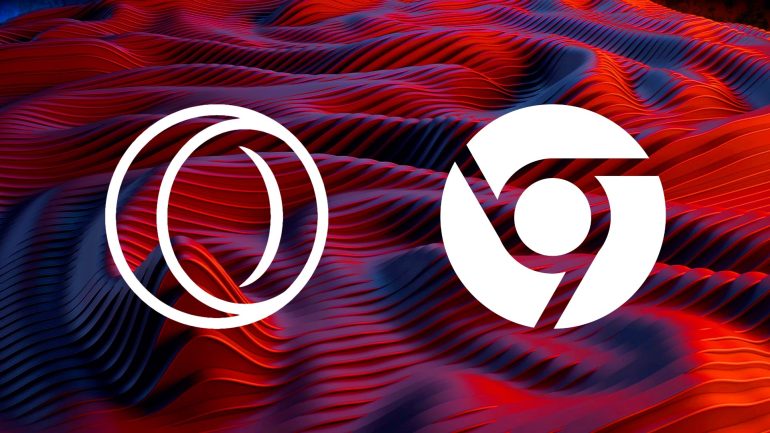 Opera GX vs Google Chrome — which should you use?

This is how Opera GX compares with the most popular browser out there, Google Chrome.

Google Chrome has been the most popular browser on the market for quite some time. Chrome holds more than 63 percent of the total browser market as of January 2022. Opera GX, a version of Opera explicitly made for gamers, isn’t as popular as Chrome. However, the gaming browser offers a pretty solid alternative to Google’s behemoth. As long as you don’t install it just for its alleged gaming benefits. But how do the two browsers compare to one another? Let’s find out in our Opera GX vs Chrome analysis. We’re starting with visual design.

Opera GX has that aggro gamery design, filled with sharp corners and saturated colors that give strong retro wave vibes. Using Opera GX is like using Winamp back when the legendary player received support for skins. Almost every Opera GX theme screams 2004 and DJ Mike the Llama. If we had to compare it to a contemporary product, just imagine all those gaming phones such as the ROG Phone or Legion Duel 2, and you’ll get the picture.

Luckily, there are a lot of different color themes to choose from, and we have found a couple dominated by shades of grey that look pretty good. Opera GX also comes with a sidebar that includes handy stuff such as bookmarks, history, and Opera GX-specific features.

Chrome, on the other hand, is all about rounded corners. UI elements come without a single sharp angle, and we like it. When it comes to themes and colors, it’s all up to you. You can go with subdued colors or create a firework made of bright pink and radioactive green. Overall, we like Chrome aesthetics more, but this is an entirely subjective category, and your taste might be a complete 180-degree turn compared to ours.

What we would love to see is Opera GX supporting Chrome themes. Sadly, despite Opera offering an extension that allows users to install more or less every extension available for Chrome, this doesn’t work for themes.

As for the UI, we like it better on Opera GX. You have the aforementioned sidebar but also a quick settings tab called “East Setup” available with just one mouse click. You can also open a new tab card by clicking anywhere on the tab bar. On Chrome, you have to click on the plus sign in the tab bar to open a new tab. Aside from these minor differences, UI is very similar in Chrome and Opera GX. But small stuff like the ones we just mentioned makes using Opera GX just a tad bit more pleasant.

If you don’t like to experiment and use Chrome flags (experimental and beta features), Opera GX is a much better choice. It’s packed with features, and its settings menu comes with a ton of options to tweak. You have stuff like the sidebar, seamless integration of various messenger apps (Telegram, WhatsApp, Messenger, etc.), the ability to have Spotify in the sidebar. There’s also a neat little screen capture tool that can create cropped screenshots.

Opera GX also comes with a built-in ad blocker that’s quite good. Aside from seeing an ad on the YouTube front page, we didn’t encounter any ad slipping through Opera GX’s ad-blocker gates. The browser also offers a built-in VPN, but we don’t recommend using it. Find out why here. Finally, you have neat minor features such as the option to force dark mode on websites (it doesn’t work on all websites, but it’s nice to have), weather details on the Home Page, or a ton of home page tweaks.

The GX Corner, a “gaming-centric” portion of the browser that includes various content that could be interesting to gamers, can be found in the sidebar. Now, some of its parts are genuinely useful. We simply love the video game release calendar, which is pretty accurate. It includes both AAA and indie titles and also shows platforms games release on. Neat.

Next, we also like free games notifications. These notifications show both free-to-play titles and game giveaways, like on the Epic Games Store. You also get a handy gaming news aggregator along with links to new video game trailers. All of the aforementioned features can be handy to gamers. The GX Corner also includes links to the biggest digital storefronts, and this is where we find a couple of nitpicks.

For instance, shady key-reselling sites such as G2A are featured right next to stores such as Steam and GOG. It’s a bit disingenuous to place G2A next to Steam. One of those is the biggest games store globally, and the other is a site known for selling stolen keys. Next, the deals section is also suspicious. Instead of showing deals on Steam, GOG, EGS, and other official key reseller sites such as Fanatical, you get deals found on the aforementioned G2A and a site called Eneba?

Anyway, we have to say that the GX Corner can be a handy tool for gamers. You get release dates and a bunch of relevant gaming news and trailers. Just don’t use GX Corner for deal hunting. Why’d you do that when you have fantastic sites such as IsThereAnyDeal (PC) and DekuDeals (consoles)?

On the other hand, Chrome isn’t exactly feature-slim, but it’s definitely weaker in this regard compared to Opera GX. You have nice little features such as a reading list (great for marking pages to read later instead of bookmarking them), but overall, Chrome is way behind Opera GX when it comes to the number of features available from the get-go. There are, of course, Chrome flags, but regular users probably don’t know about this. Overall, we like Opera GX more regarding the number of built-in features.

Chrome extensions are a significant part of Google Chrome. Extensions drastically improve the situation regarding features and usability and give a definite edge to Google’s product. With that said, there’s that extension for Opera browsers that allows Opera and Opera GX users to install Chrome extension. We’ve tried it, and most of the extensions we’ve been using with Chrome worked on Opera GX without issues. Everything except Chrome themes, but that was to be expected.

Talking about performance, both browsers are snappy and fast to load pages. Opera GX is a bit slower to start, and it has a white screen that shows when you open the browser. The white screen shows for about half a second, and it isn’t annoying. Still, it’s there, and some users might find it irritating.

Both browsers are very similar when it comes to the amount of system resources they use. As shown in our analysis Chrome has a slight edge when you run it alongside video games. Finally, gaming-specific tools such as CPU and RAM limiters found in Opera GX are of little use to everyone except users owning budget gaming PCs with 8GB of RAM or less. Finally, there’s also a tool called Network Limiter and that one could be useful if you’re on a slow network. On the flip side, if you’re playing a YouTube video or a Twitch stream, it doesn’t make sense enabling it.

Both Chrome and Opera GX are very secure web browsers. They both use Chromium as a base and Chromium comes with a ton of security features. Overall, Chromium is a highly secure platform. We’re keeping this short: if you care about internet security, both browsers are excellent choices.

As for your privacy, well, neither of the two is great. You can expect your private browsing data to be collected and used in ad campaigns. We’ve already talked about privacy issues in Opera GX and how it’s almost certain that Opera sells your data or earns money from your data, either directly or indirectly. And, if you’ve followed tech space in the recent decade, you know that Google does the same with Chrome.

Overall, as an out-of-the-box experience, Opera GX is a slightly better choice. It comes with more features, offers handy options such as the sidebar, and includes a pretty solid adblocker. Chrome is also good, and if you’re okay with experimenting, you can get a ton of experimental features via Chrome flags. Visually, we like Chrome best, but this comes down to personal preference. Below you’ll find a list of pros and cons for both browsers.