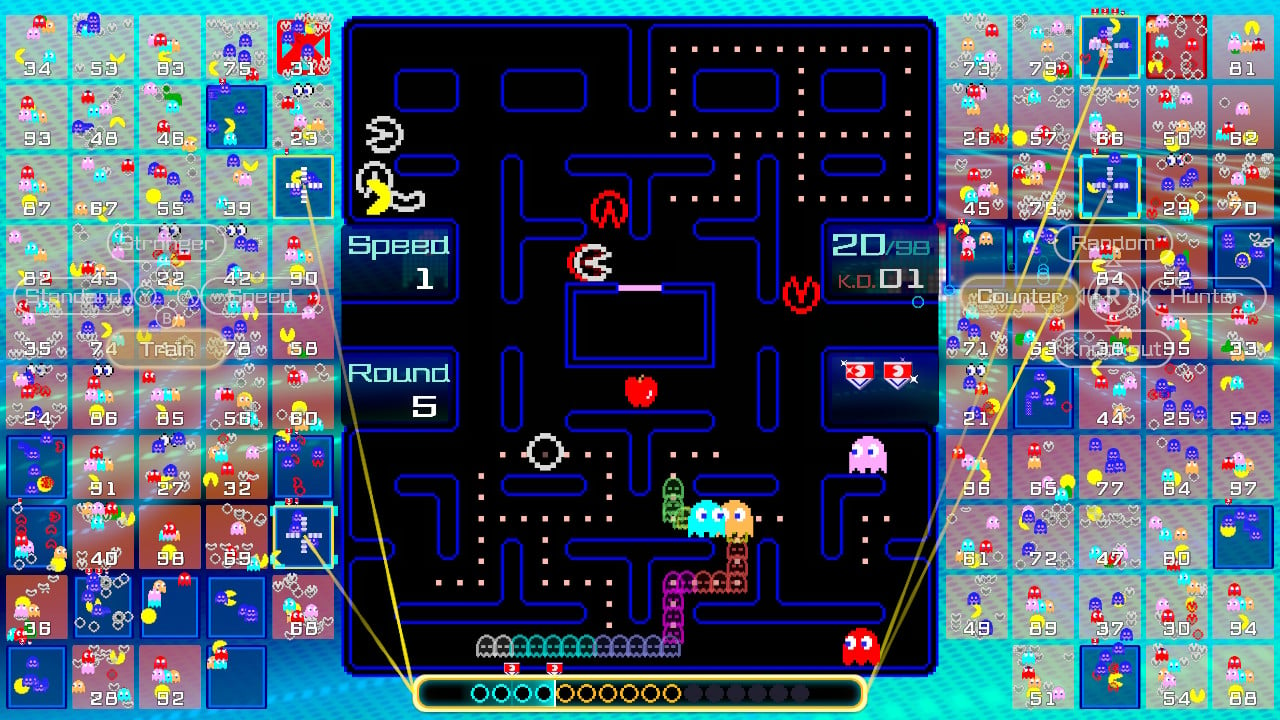 Play as everyone’s favorite yellow ghost and take down the competition.

Pac Man 99 is the latest free-to-play battle royale title for the Nintendo Switch. The game’s based on the same premise as Tetris 99 and Mario 35. You compete against a bunch of other people are trying to survive, beat everyone else, and win the game. This time, we’re playing as Pac Man, one of the best-known video game characters in the world.

The race’s on as soon as the match starts. Unlike Tetris 99, Pac Man 99 has a sense of urgency right from the get-go. Instead of having a couple of minutes’ worth of breathing room, Pac Man 99 throws you into high-paced action right from the start. You could utilize some strategies that can make the game much slower (like camping in corners), but the majority of the time you’ll be running from and chasing ghosts at a breakneck pace.

The game’s main, Battle Royale, mode is free but you’ll have to shell out $15 to unlock extra modes. The price is too high for a simple collection of modes that include CPU Battle, High Score Attack, and Time Attack. Too little is offered for the price and, unless you’re a Pac-Man fanatic, we advise you to skip the paid content. They could’ve at least offered a rudimentary campaign for the price. Oh well.

When it comes to visuals, Pac-Man 99 looks just right. The game’s simple in its graphics department, faithful to the original game, in most aspects. You have the hungry yellow dude, the hungry colored ghosts, who turn into frightful ghosts once you eat a power pellet. There’s the classic labyrinthine map, and a ton of dots to eat. Of course, there are some tweaks to keep the game multiplayer-friendly and competitive.

First of all, you can pick up ghost icons that then transform into ghosts and stick to one of the ghosts cruising the map. This creates a sort of a ghost train. Then, after you eat a power pellet, you’re able to eat like 20 ghosts at once, launching a flurry of attacks towards your foes. Like in Tetris, you create combos by eating ghosts and once an attack is ready, the people you’re targeting will receive a number of white, jammer Pac-Man dudes who roam the map and slow you down once you get in contact with them. Power pellets are used to get rid of the jammers. That said, advanced jammer forms (such as red jammers) cannot be completely removed from the board.

Once you’ve collected enough dots, a fruit will appear below the ghost box. Instead of giving you a fat bonus to your score, fruits reset the board, repopulating it with dots (not always) and power pellets. Finally, as the game progresses, yellow and red jammers will start showing on the map. The former will chase you across the map and slow you down, while one contact with the latter means game over. There are, of course, attacks, like in Tetris 99. But instead of just allowing you to change the targets of your attacks, Pac Man 99 also gives you different attack forms.

You have the Classic attack, that sends Pac-Man jammers towards players you target, without any repercussions but also without any bonuses. You also have three variations of the classic attack. The Stronger attack sends more jammers towards your opponents but also reduces the time ghosts stay in frightened form. Train adds more ghosts to the train but it also spawns one jammer for each extra ghost you create by picking up ghost icons. And finally, the Speed attack allows you to run across the max at 2x speed after eating a power pellet. On the flip side, you send fewer jammers as part of your attacks.

These changes to the cult classic gameplay formula ultimately create a fast-paced multiplayer experience that is finished in about five minutes. Some matches will take a bit longer (about seven minutes, based on experience of playing dozens upon dozens of matches) but the majority of battle royale battles is done in just five minutes. And this is great because you can play Pac-Man 99 anywhere.

This makes the game a near-perfect pick-up-and-play title. Unlike Tetris 99, which can take dozens of minutes for one match to play out, Pac Man 99 is a fast-paced Battle Royale where there are 50 people left before you even realize the game has started. This works in the game’s favor because you’ll always have the time for one match. You can just pick up your Switch whenever you are, even if you’re on a five-minute coffee break. We found ourselves playing the game quite often, without any preparation. Instead of finding the time and planning in advance, as we did with Tetris 99.

Breakneck speed but not without focus

As we’ve said, the game’s non-stop in sixth gear. You cannot glance at other people’s screens as you can do during the early stages of Tetris 99. Unless you’re a camper, anyway. But the thing is, other people’s screens aren’t as informative as in the other 99 title. In Tetris, you can see just how big of a trouble other people are in. The number of lines is a great descriptor of the overall state of other players’ boards. Yes, they could pull out a hail marry move and clear the majority of their board, but on average, more uncleared lines usually means a worse situation.

In Pac Man 99, things are different. You cannot see the number of power pills other players have. You cannot see if they have fruit waiting for them to eat, restart the board, and hit you with a strength of 20 ghosts. And while you can see the number of ghosts and their state, this isn’t as informative as the number of unclear lines in Tetris. A player can be surrounded by colored ghosts and red jammers but they might just wait for a perfect moment to eat a power pill.

Or they might look like they’re winning only to end their run by slamming into a ghost that decided to change their direction in a fraction of a second. And while other players’ screens aren’t providing much aid, this doesn’t mean Pac Man 99 is devoid of strategy.

As we already said, you can decide to camp and grab a few moments of respite. This could buy you a couple of seconds, enough to avoid the current wave of attacks, and survive long enough to launch a counteroffensive. You can also time your attacks by waiting for other players’ efforts to kill you to stop and only then start eating ghosts. Further, eating fruit means restarting the board but also cutting down the time ghost stay in their frightful form. You can time when and how often you pick up fruits in a way that gives you an advantage.

We also mentioned you can target your attacks. The random option is turned on by default. Changing it to Counter will send jammers to players who attack you. You can hunt down players with the most KOs with the Hunter targeting option. Or you can pray on the weak by selecting the Knockout option. Combined with camping, timed power-up pick-ups, and other strategies, Pac Man 99 can become a frantic, yet strategic experience where you aren’t just running around like a madman. But do all these qualities and quirks ultimately make for a good game?

Charming, but not going for the top spot

If you like Tetris 99 and Pac Man games in general, you’ll probably like Pac Man 99. It has beautiful retro visuals, fast-paced gameplay, matches that are short but filled with adrenaline-inducing moments, and the game’s deeper than what it looks like on the surface.

Deaths are quick and you won’t realize you’re done until moments before the end. Winning a game is relatively hard, especially because during the last couple of minutes you really have to push your reflexes to 11. And we like Pac-Man 99. It’s a fun little game that’s perfect for short bursts of multiplayer fun.

But it doesn’t have much depth when it comes to progression. You win a match and then what? You cannot collect tickets (at least for now) and unlock new stuff. You can’t switch between maps. Adding unlockable vanity items, such as unique ghost and Pac Man designs, or different visual designs of the map would be great. Or a single player campaign on top of other paid modes. Also, some players might dislike the fact that the game doesn’t explain anything. You have to play it and connect stuff on the go. A simple tutorial would do wonders for new players.

Sure, Pac-Man 99 doesn’t have many reasons to play it on a regular basis. But as a title you’ll return to when you want to kill some time it’s more than alright. Winning games will probably become much harder once enough players master the game but hey, at least the journey to a win is as fun as winning a match. In the end, this is a simple free-to-play title that doesn’t try to reinvent the wheel (Tetris 99 sort of already did that). Instead, it offers pint-sized multiplayer that can keep you hooked, if only for a while. And that’s enough for us.