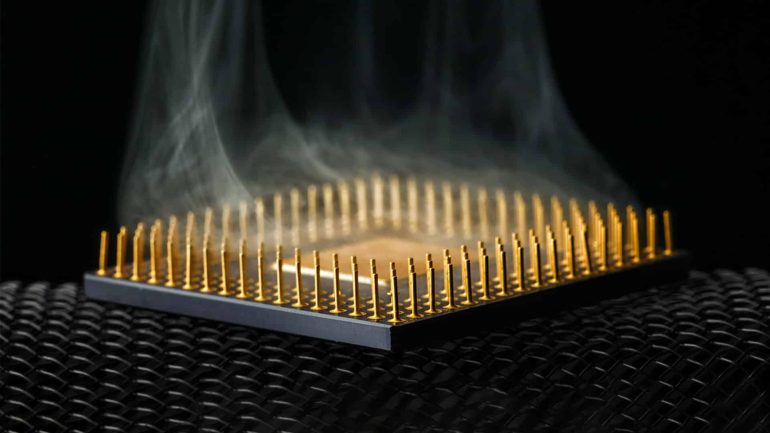 The AMD Ryzen 5 5600X and the Intel Core i5-10600K are two very similar CPUs. They both have six pretty fast cores and twelve threads, their price is pretty similar, and they both have been called the best bang for the buck gaming CPU at some moment. In fact, the 5600X has taken that crown from the 10600K. So, which of these two processors is a better choice, for games and productivity? Find out below.

The Ryzen CPU has much more cache than Intel (32MB vs 12MB) and the 5600X has also better power optimization, with 65W TDP. The 10600K has an official TDP set at 125W. Real work tests confirm this, with the 5600X using noticeably less power than the 10600K in different types of usage scenarios when both run at stock. When overclocked, the 5600X uses about 50 percent less power on average than the 10600K.

When it comes to the selling package, the 10600K doesn’t come with a box cooler, unlike the 5600X. Yes, the Wraith Stealth bundled with the 5600X is loud as hell and can’t compare to even the budget aftermarket coolers, but it can hold its ground until you get a better cooler. Or you can continue using the Stealth. It’s a perfectly fine cooler if you don’t mind the noise and don’t plan on overclocking the CPU.

The catch? On B460 you’re limited to DDR4 2666 and you cannot overclock the CPU. Since older B450 and X470 boards should get BIOS updates in early 2021 that will allow them to run the 5600X (some board manufacturers are already bringing B450 BIOS updates), the 5600X is a clear winner when it comes to chipset compatibility. Now, let’s compare the performance between the two.

In short, the Ryzen 5 5600X is faster than the 10600K both in games and productivity apps. In games at 1080p, the 5600X is faster upwards to twenty percent in selected titles. Some games (RDR 2) still prefer the Intel offering, but the overwhelming majority of games work better on Ryzen. On average, the difference is about 10-15 percent.

Do note that this is CPU performance at 1080p. At 1440p, and especially at 4K the GPU becomes the main choking point. Even the RTX 3090 will bottleneck both of these CPUs at higher resolutions. If you game at 1440p or 4K, you probably won’t notice the difference between the two (well, aside from 1 percent lows, which are higher on the 5600X). So, if you game at high resolutions and that’s all you use your PC for, you can buy either of these CPUs and you’ll get virtually the same performance.

Well, yes, but the 5600X is no slouch either. While it won’t gain massive performance gains when overclocked, when you put the two CPUs one against the other, overclocked and paired with heavily tweaked memory, the 5600X is the winner, even in RDR2. Now, while these results may seem impressive do not forget that we’re talking about heavily tweaked memory (that’s usually quite expensive to get in the first place) and a motherboard that’s too expensive to justify the performance gains.

On a mid-range B550 or an X570 board expect less impressive results. Most users will be just fine running the 5600X at stock clocks. Overclock the CPU only if you really need a couple of frames more in games, a couple of seconds less when rendering a video, or if you just want to have some fun. The 10600K, on the other hand, can get larger performance gains when overclocked (without using tuned memory), reaching 10900K performance in games. If you have a solid Z490 board and a quality cooling solution, feel free to OC the 10600K.

Price and which one to buy

At the moment, the 10600K is about 10 percent cheaper than the 5600X. Even though it’s pricier, the 5600X is the better choice, both for gaming and work. It’s about 10-15 percent faster in games (the difference is even larger in productivity benchmarks) than the 10600K, it can run on basically every B550 and X570 board (the 10600K demands at least a decent VRM in order to reach its full boost clock potential), it comes with a box cooler, and it’s a newer CPU.

When it comes to the longevity of the two CPUs, we reckon they will age the same. The performance difference will stay so the 5600X is a bit better choice for futureproofing your rig. We reckon both CPUs will work great with next-gen games, especially at higher resolutions. But if you have to pick between the two, get the 5600X.

The 5600X is the best bang for the buck gaming CPU, but you should think about getting a 10600K if you find a killer deal that lowers the price to about 30-40 percent lower than the 5600X price, or if you find a used 10600K along with a motherboard for a great price. The 5600X is for people who want a gaming CPU that’s in the same ballpark as the 10900K or the 5900X but don’t want to pay a flagship fee for getting one of those. Also, if you cannot find the 5600X at its MSRP, or if you cannot find it at all in your area, the 10600K is a worthy alternative.

The 5600X is the best bang for the buck gaming CPU at the moment and should be the first pick for every gamer who wants great CPU performance for (much) less cash.

The 10600K is slower than the 5600X in every way and it doesn’t come with a box cooler. Still, it can be a solid choice if you find it massively discounted, or if you cannot buy the 5600X for some reason.