What are advantages of running RAM in dual-channel or quad-channel mode? 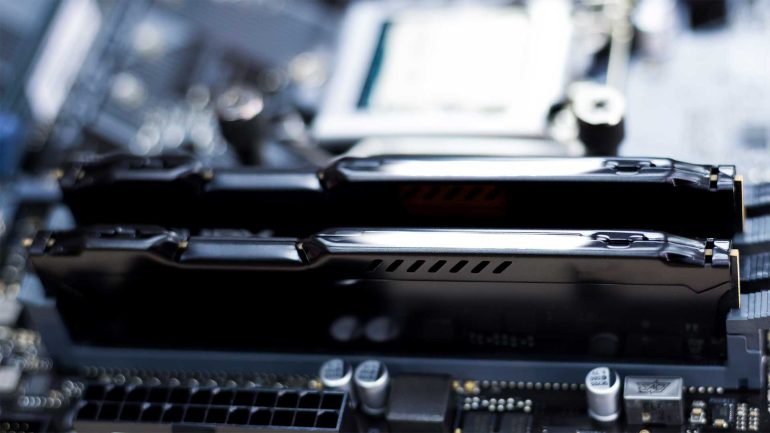 You’ve probably heard that you should run your memory (RAM, not the same as vRAM) in dual channel mode. In other words, you should always get two sticks of RAM (a kit) instead of one if you want the best performance. But what is dual-channel memory configuration, and how does it work? Next, what are the advantages of running RAM in dual channel, or maybe quad-channel mode? And is it right that it’s almost impossible to make two different RAM sticks run in dual channel configuration? Read on and find out the differences between running RAM in single-channel, dual-channel, and quad-channel configs.

How does it all work?

Unlike memory rank, a spec that entirely depends on the design of a RAM stick itself, whether you’ll be able to run RAM in multi-channel configuration depends on your CPU and motherboard. The memory controller in your CPU (back in the day, the memory controller was part of the board’s chipset) can support either dual, triple (quite rare these days), or quad-channel memory operation. Next, different motherboard models have support for different multi-channel configurations.

You can only run memory in single-channel or dual-channel modes on mainstream or consumer-grade platforms (AMD Ryzen, Intel Core series of CPUs). Only HEDT CPUs and motherboards (AMD Threadripper and EPYC, Intel Core Extreme, and Xeon series) support running memory in a quad-channel mode of operation.

But if you have a consumer-grade CPU and board, they usually come with a memory controller with two-channel support and DIMM slots that feature two physical memory channels. Each memory channel has a 64-bit bandwidth, and here lies the main reason for running memory in the multi-channel configuration. By running it in dual channel mode, you practically double the data rate from 64-bit to 128-bit (or 256-bit, in the case of quad-channel configuration).

Now, on the motherboard side, RAM slots supporting dual-channel configurations are usually colored the same. So, if you have a dual-stick memory kit, install the two sticks in DIMM slots that have the same color. They are usually slots 1 and 3 or 2 and 4. On some models, this can be different but if you’re not sure, follow the coloring scheme.

Running memory in multi-channel configurations can have certain performance benefits. In case you’re using apps that can utilize this extra memory bandwidth. For instance, if you’re playing an open-world game where data is constantly swapping in and out of RAM. Having a 128-bit memory bandwidth instead of a 64-bit one will increase performance in these demanding open-world games.

A similar thing can be said about memory-heavy apps (rendering apps, video editing tools, programs used for simulations, and machine learning). Doubling or quadrupling the memory bandwidth should increase performance to a certain degree. But just how much? Let’s find out.

Performance differences in games and apps

So, let’s start with gaming. The current open-world trend in gaming means games need more RAM than ever. And, if possible, they prefer fast RAM that runs in multi-channel configuration. This allows the CPU to cycle through memory faster and more efficiently, which should increase performance. You can find more about how CPU and RAM work together and depend on one another in our RAM vs CPU guide.

In practice, this indeed works as intended. In most games, you will see more than 10 percent of performance increase, no matter whether you run the games in 1080p or 1440p. Because, in most cases, you’re GPU-limited at 4K resolution, we expect these gains to be less pronounced (if any) when playing demanding games at 4K. Esports titles will see noticeable improvements. They run very fast even in 4K since they’re not GPU-bound at 4K. AAA games that struggle to reach 60fps with ultra settings won’t see that high of a benefit.

And this also works for older titles. Here you can see that CS: GO, a game that’s almost a decade old (yes, we know, it has been nearly ten years since this game came out), sees up to a 33 percent performance increase when running on a system with a dual-channel memory configuration. Of course, not all games will see a benefit (see Doom in the first video or Total War Shogun 2 in this Gamer’s Nexus analysis). But, in most cases, you will see significant improvements.

Do note that, even if you don’t see a higher average frame rate, there’s a good chance you will get higher 1% and .1% lows. Next, running faster memory in single-channel mode will net you fewer frames than running slower memory in dual channel config. In other words, it’s better to get two sticks of slower memory than one stick of fast RAM.

And, what’s also very important, running a smaller amount of memory in dual channel mode leads to better performance than running more memory in single-channel mode. In other words, even if you plan on getting a budget build (let’s say, with eight gigs of RAM), spend a bit more cash on an 8GB kit with two sticks instead of a single 8GB stick unless you’re planning to get a second stick soon and can get the same memory, with the same speed and timings. More on this later.

In applications, there are some performance benefits. But, they aren’t as pronounced as when playing games. You can net a couple of percent in most apps, and that’s about it. Demanding apps used for simulations and other extreme computations, such as the Euler 3D, will see a double-digit performance bump. As for the quad-channel vs. dual-channel performance, you’ll get wider bandwidth, but not much in terms of performance increase.

Just remember that if your graphics card is the main bottleneck in your system, chances are you won’t see a high performance increase, as shown in different analyses featured here. Now, let’s talk about how different memory sticks work together and whether it’s indeed almost impossible to make two different RAM sticks run in dual channel mode.

There’s an unwritten rule in the DIY PC community that says the following: if you plan on running your memory in dual or quad-channel mode, get a RAM kit from the get-go. It’s because getting different RAM sticks to run in multi-channel configuration is next to impossible, even if they run at the same frequency and have the same timings.

The reality is a bit different. Now, two things are sure:

You can mix other specs, and you’ll still have a good chance of running different modules in multi-channel mode. At least if you’re planning on populating two DIMM slots. Or three slots, two with a RAM kit and one with an extra memory module. Occupying four slots with different memory will probably cause all sorts of issues, so we don’t recommend that.

Now, if you plan on upgrading your memory and have only a single RAM stick, we recommend getting the second stick from the same manufacturer with other specs being as close to your current stick. You can get a module from a different brand, but the chances of them cooperating without issues won’t be as high.

Further, do not forget that similar modules from the same manufacturers can have their memory chips manufactured by different companies. For instance, look at these two G.Skill Trident Z Neo RAM kits:

They look pretty much the same, but the first uses memory chips from SK Hynix, while the second includes memory chips from Samsung. Samsung’s memory chips are better for overclocking and come with tighter latencies, making the second kit much more expensive. So, if you had the second kit and wanted to upgrade to four RAM sticks, you could run into issues. Buying the first kit will make your original RAM run with looser timings and probably allow it to overclock. So, don’t forget to check out all specs (even the latencies) before purchasing.

In each case, make sure you can return the new stick and get your money back before pulling the trigger. If you encounter issues (and there’s always a chance you will), you’d want to have an easy way out. Our general advice is that if you can return the extra module you’re getting, it’s okay to buy a different module and try running it in multi-channel mode. If you cannot RMA the purchase, don’t risk it.

Finally, when buying a Windows laptop or a prebuilt PC, make sure you pick a config that comes with two UDIMM slots or two RAM sticks, respectively. Some laptop models have dual-channel memory but just one RAM slot. In these laptops, the second RAM module is soldered to the PCB. This makes upgrading the memory further down the road complicated if you want to keep using dual-channel configuration. And some prebuilt configurations come with only one RAM module, meaning you’ll have to buy a second stick to enable dual-channel mode.