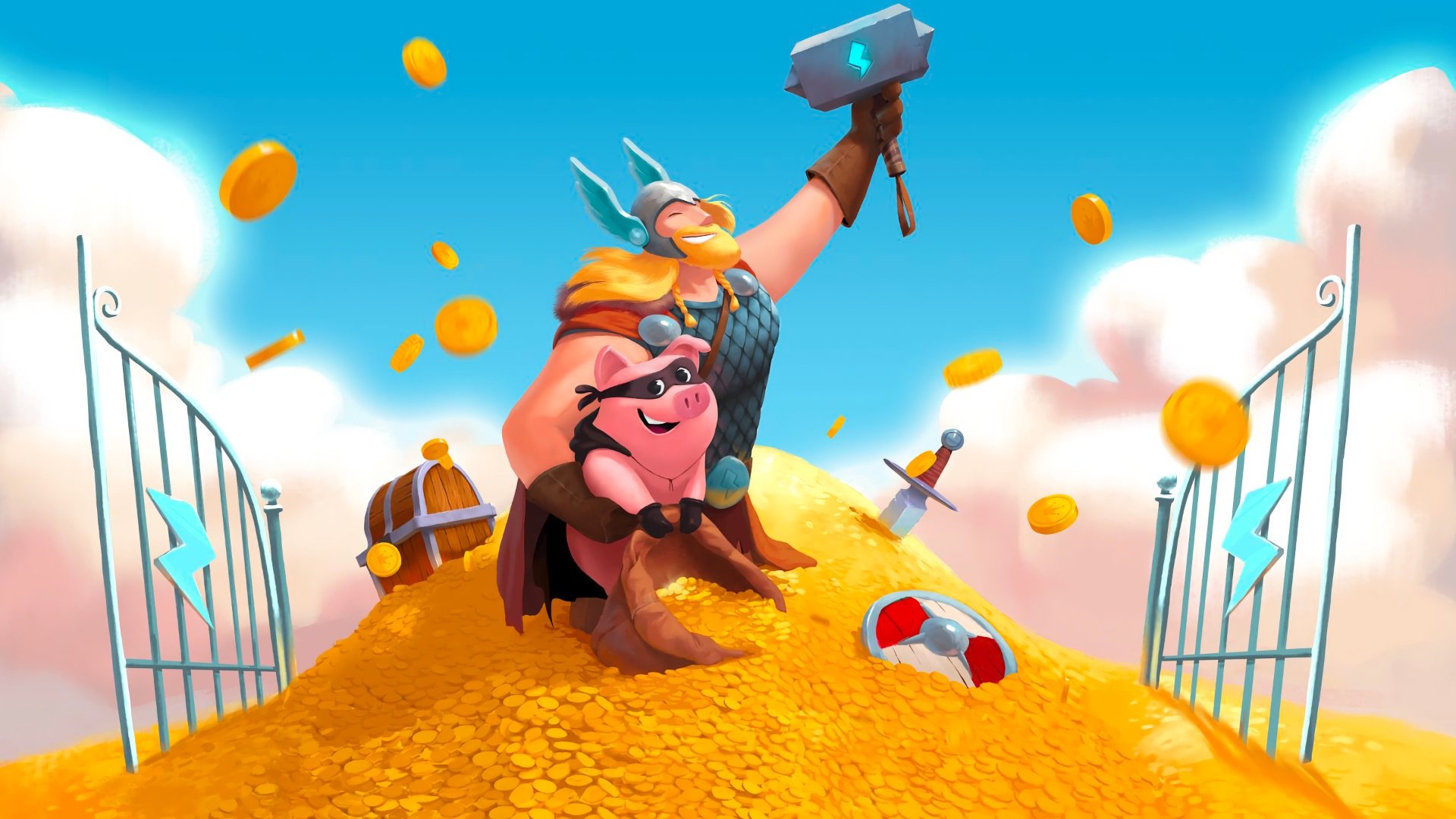 This top-grossing game shows no signs of stopping.

Coin Master was developed by the Israeli company Moon Active and released in 2010 on iOS and Android. It is a casual free-to-play game that borrows its core mechanics from gambling. The game is single-player; however, some events or modes can be multiplayer.

To quote the game itself, with Coin Master “spin, attack, raid and build” to be able to upgrade your village/attack other villages by earning coins through a system akin to slot games. The number of spins per hour is limited, but players can buy more spins from the in-game store or get extra ones by doing specific actions. There are also Coin Master free spins one can get through links for people subscribed to the newsletter and on different social media accounts. Each village is themed (for example, you can find the Buddhist village or the Viking one), and each represents a level. Currently, there are a total of 452 villages.

The app is still quite popular nowadays, so let’s see what it has achieved and how it fared since its inception with the most significant Coin Master statistics and facts. If learning more about the gaming industry excites you, then we think you’ll love our piece about our video games industry statistics.

They are the ones sometimes spinning more than 100 times per day, and have kept the game afloat since release and are still doing so. Cutely named Vikings by Moon Active, who are the people behind their screen and the success and longevity of Coin Master?

Most Coin Master players are female at 69%.

One thing that has been noticed with casual mobile games is that they are extremely popular with the female audience. They are usually pretty easy to understand, relaxing to play, and possess straightforward mechanics. Even with the extra features, Coin Master is mostly all about spinning a wheel. We can then understand why the most active players are mature women. In general, the fanbase is on the adult side, which goes well with the age rating. Because the game features gambling mechanics and involves spending real money, it could not have been targeted toward children. And parents who allow their kids to play the game are advised to keep an eye on them.

The game started picking up steam in 2018 and reached its best numbers in 2020. The COVID-19 effect has been impactful in 2020 for Coin Master, with people being forced to stay at home, with an exponential growth that introduced new players to the game and kept them loyal. Even the amount people were willing to spend saw a significant increase in time.

As in most cases, the United States tops the ranking in terms of player spending. The top three are pretty constant, with the same countries always at the top. In Germany, the game is often found in the Monthly Most Downloaded Games category. Those numbers show how invested players are, and even if profit during lockdowns and quarantines was way higher, it does not change the fact that Moon Active is still making quite a lot of money.

As of 2021, Coin Master was earning around $1 million daily.

While Moon Active has leveraged celebrities to promote Coin Master, among them being Terry Crews and Jennifer Lopez, the game has internal mechanics to boost engagement. Coin Master a prevalent card collection mode that even generated a lot of social communities on the Internet for players who would want to show their collection or trade with other people. Players can attack other people’s villages or raid their fortunes to inflate their own. Events that will last over a few days are also organized, including a tournament where players can play with and against each other. For what seemed to be a simple slot game, Coin Master has several features, increasing the interest in players and giving the game its addictive nature.

Coin Master is ranked #5 in the Most Downloaded Games with 25 million installs.

2020 took a turn for Coin Master and a positive one at that. The game even got past games like Roblox and PubG, ranking pretty well in that top 10. All in all, just being part of it is already a feat since there are hundreds of apps out there. It is quite a surprise that it was not part of the top 10 Most Downloaded Games – worldwide. The game is still as popular financially in Germany and the UK, while it is waning in the US (but it is still doing well).

Time to take a closer look at how the community consumes the game: it is not only about the countries most in love with the game (read: with the most installs), but we will also explore the social media presence of Moon Active’s baby.

The United States ranks first as the country with the most installs of Coin Master at 39.5 million installs (20.3%).

We find a more typical ranking once the monetary aspect is taken out, and we only consider the number of downloads. One with India, Brazil, and the United States is seizing the top spots for themselves. The United Kingdom got quickly sidelined by Brazil, even if the UK stays a big spender nowadays compared to Brazil.

Coin Master is popular on social media, but most of all on Facebook with 19.9 million people liking their page.

One thing Coin Master does well is engaging through social media. Their community manager knows their job as all platforms are frequently updated. The content pushes players to engage with other players and the game itself (even if indirectly). Several mini-games offering the chance for more spins/coins/pet food/exp are posted during the day, and those are pretty easy, which means that there is no favoritism and the game is allowing all players. Even if their Youtube seems to be a bit left behind, the videos are highly entertaining, with many ads for mini-skits featuring real people.

Coin Master is not that popular on Twitch, being ranked at #9239.

It is surprising to find Coin Master registered on Twitch, even if its specs are terrible. Naturally, the game is not made for streaming as it may prove to be exciting for the player, but certainly not for viewers who are just going to end up mostly watching some wheels spinning. But now, you know that you can stream yourself raiding your neighbors.

Coin Master is a mobile-only game that makes it easier to pinpoint where it creates more waves and where players are more invested. It was also a great idea to stay on mobile devices, considering the nature of the game and its mechanics (such as your spins getting replenished after an hour or so).

Coin Master is ranked #1 in Top Grossing Games of the Google Play Store in the US.

Since we already know how the game is doing in Germany and the UK, it is also interesting to see how it is received on the charts in Brazil and India, the two countries right after the US in terms of downloads. Not so surprisingly, the game also opens wallets left and right over there. Android users are then again the majority regarding which platform has seen the most downloads. Even if it does not rank that well in Top Free Games, the game is still being downloaded, saying something.

Coin Master is ranked #4 in Top Grossing Games of the iPhone App Store in the US.

The gap between Android and Apple users is always a bit drastic, and Coin Master is no exception. However, one thing that stays the same is how the game dominates the most grossing charts except maybe on iPad, where the game does not have a big audience in Canada and the US. Also, thanks to Sensor Tower, we pinpointed that on iOS, right after the US, France and Canada were the countries accumulating the most downloads. Unfortunately, even if China is only using iOS due to Google’s restrictions, data from there is not available.

Coin Master did not seem like much when it entered the scene, but it quickly created a new trend and revitalized a genre in the mobile game industry that was already existing but had no visibility. In 2020, Coin Master represented 93.3% of the total revenue generated within the category of Social Casino. And nowadays, it still occupies a spot way higher than any other game from the same genre. Its success gave rise to so many copycats that you might download the wrong game if you aren’t careful on the App Store or Google Play, thinking it to be Coin Master.

The game has reinvented the genre by adding multiple exciting features that bring diversity to the gameplay and even adding a social dimension by involving other players. It is not just about spinning some wheels waiting for shapes to match each other. The only downside would be the intense gambling that goes hand in hand with the game and might trigger some addiction and compulsive gambling behaviors. Other than that, as long as people are responsible and do not spend more than needed, everything is well. Most players are adults enjoying financial freedom after all.