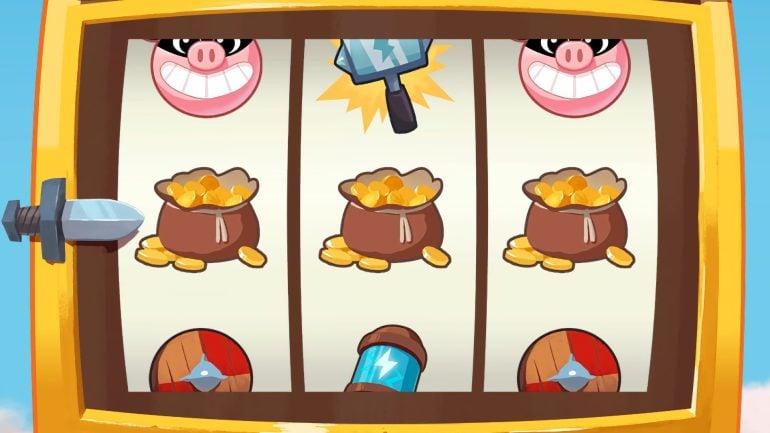 Merge a base-building strategy game with the chaotic thrill of a slots machine, and you’ve got Coin Master. The gameplay is simple: spin the Slots machine to perform an action. You can earn Coin, attack other players’ bases, raid player stashes, or get shields that reduce the effect of other players’ attacks. Then use the Coin you gain to construct and upgrade your base’s structures.

Coin Master is about as straightforward as they come, so it shouldn’t take long for you to pick up the mechanics and start playing. But that doesn’t mean there aren’t ways to optimize your play and improve your Coin Master experience. Read on for a complete guide to the best Coin Master strategies, including some tips and tricks to accelerate your base building and keep your Coin stash safe from other players. Be sure get some Coin Master free spins while you’re at it.

What is Coin Master?

Coin Master begins with a brief tutorial that introduces you to the basic mechanics, then gives you the freedom to start playing however you want. It’s certainly enough to get started, but here we’ll get into some of the mechanics the tutorial doesn’t explain.

Everything in Coin Master revolves around obtaining and spending Coin. There are three primary means of earning Coin in Coin Master (outside of spending real money for it): 1) winning Coin from the Slots Machine; 2) attacking other players’ bases; and 3) raiding other players’ bases. To perform one of these actions, you must take a Spin on the Slots Machine.

The Slots Machine is where the meat of the game lies, and you’ll be spending much of your game time on this screen. You can get to the Slots Machine by opening the in-game menu and selecting it or by swiping down from the Village view.

Below the Slots Machine, you’ll see your current number of available Spins. Each time you use the machine, this number goes down by one. The Slots Machine in Coin Master has four reels with four different symbols. If you get four of the same symbols in a row, you immediately perform that action. These four symbols are a bag of coins, a hammer, a pig bandit, a shield, and a spin capsule.

The Bag of Coin

The Bag of Coin, as its name implies, gives you Coin. Unlike the other pictures, you don’t need an entire row of these to earn the reward. Every Bag of Coins you get after a Spin net you a small reward, but getting a whole row of them gives a bigger payout than four individual Bags of coins would.

Get an entire row of Hammers (the game’s artwork implies this is Thor’s Hammer), and you will attack another player’s base. If you’ve linked your Facebook account to Coin Master, you can choose a friend to attack; otherwise, the game picks a random player.

The player’s Village will appear on your screen, and you’re asked to choose which of their buildings you want to Attack. Attacking a building net you a Coin reward and reduces the star level of the attacked building.

The Pig Bandit is a symbol of a grinning pig wearing a bandit mask. If you get four of these in a row, you immediately perform a Raid.

Unlike with Attacks, you can’t choose the target of your Raid. Above the Slots Machine is the name and picture of your Coin Master, a player who is your assigned Raid target. When a Raid begins, you’re taken to your Coin Master’s Village. However, instead of attacking one of their buildings, you’re given three Shovels to dig holes with. There are several locations in the Village that you can dig up (marked by large X’s). Pick three holes to dig up; some of them will contain a significant amount of Coin. This Coin is taken directly from the victim’s current Coin stash and is a great way to get on someone’s nerves.

The Shield is used to protect your base from enemy attacks. You can have up to three Shields at once, meaning you’re protected from three attacks. If you have a Shield when an enemy attacks your buildings, your building will be saved and won’t go down in Star rating.

The same rules apply when you’re attacking a player with a Shield. You will still gain 50,000 Coins (much less than you would otherwise), but the player’s building won’t take any damage and won’t go down in Star rating. It’s important to note that the Shield doesn’t protect you from Raids.

Villages serve as the levels in Coin Master. There are five buildings you must construct at each level. To complete it and advance to the next Village, you must upgrade all of the buildings in your current Village to a 5-star Rating. Upgrading buildings costs coins, and upgrades become progressively more expensive the further you get in the game, so prepare for a grind. The buildings don’t have any special effects or functions and are merely markers for your progress toward the next Village. As of right now, there are 314 villages, each with its unique theme, that you can complete in Coin Master.

The Revenge mechanic allows you to get back at a player who has Attacked your Village. If another player has successfully attacked your base, you have an opportunity to get strike back.

Give the Slots Machine a Spin. If you get a full row of Hammers, the game will take you to the Attack screen and transition to a random Village. Pay attention to the top of your screen; there should be a Revenge option there. Select this, and the game will bring up a list of all the players who have recently Attacked you. Pick one, and you’ll be taken to that person’s Village, where you can lay down the hurt.

Cards are earned by opening up Chests, which are purchased using Coins. There are several themed Card Collections, and each Collection contains nine Cards. Collect all nine Cards in a Collection, and you’re rewarded with bonuses, including a massive influx of spins coins, and even Pets.

There are three kinds of Chests that you can purchase; the more expensive the Chest, the more cards you’ll find within. The quality of the Cards you can get from a Chest is dependent on your current Village Level. Once you reach the higher Village levels, you also have the chance of getting special Gold Cards from the Chests you open. Gold Cards are rarer versions of other cards, and their Collections offer much bigger rewards upon completion.

One of the most exciting mechanics in Coin Master is the Card Trading system. You can send up to 5 Cards to your friends every day, so it’s a good idea to join Coin Master forums and communities. Many have dedicated Card Trading sections where you can strike trading deals with other Coin Master players.

As explained above in the Cards section, You can purchase chests from the in-game shop for Coins. All Chests can give you cards of up to 5-star quality level, but the more expensive Chests have greater odds of dropping higher quality cards. Higher-level Chests also have lower odds of dropping low-level cards than low-level Chests, so if you’re looking for a particular 1-, 2-, or 3-star card to complete a Card Collection, you’ll want to spend Coins on lower level Chests.

You can also receive Pet Snacks, Pet XP, or bonus Spins from Chests. These are added to your inventory atop the Cards you receive, so they don’t affect Card drop probabilities.

How to get Lenny the Lefty in Coin Master

Depending on which Chest you’re opening, you have a greater chance of drawing a specific card’s rarity. Only the Mystery, Ruby, and Valentine’s Chests have chances of dropping a Joker Card. The rest do not.

You can see the official probabilities according to Moon Active, the developer behind Coin Master. The Bonus Spin probabilities for Mystery, Valentine’s, Small Lucky, Big Lucky, Small Easter, and Big Easter Chests are dependent on your current Village Level. Pet XP also works the same way; the higher your Village Level, the more potential Pet XP you can receive from a Chest.

The Joker Card is an ultra-rare card that you can earn by participating in Coin Master events or unlocking Mystery Chests. The Joker Card can transform into any card you want, even Gold Cards. Note that Joker Cards have a time limit, so be sure to use them before they expire!

Pets are adorable animals that accompany you on Raids and Attacks. These loyal little critters also offer cool bonuses that help boost you on your journey to become Coin Master. Pets are hatched by accessing the Pet screen via the game’s menu or tapping the Egg beneath the Slots Machine.

Once activated, your Pet will give you their bonus for the next four hours. Once those four hours are up, your Pet will fall asleep, and you won’t be able to enjoy their effects for a substantial period.

You can speed up their recovery period by feeding your Pet with Treats. You can spend real money to immediately get Food or take a Spin on the Slots Machine for a chance to get Treats. Treats are given alongside the typical reward you earn from your Spin result.

The effects granted by Pets can be increased by giving them XP Potions that level them up. Like Treats, XP Potions have a chance of dropping with every Spin on the Slots Machine.

Tiger boosts the amount of Coin you earn after Attacking another player. As you level Tiger up, the Coin boost increases.

Rhino is unlocked by completing the Creatures Card Collection. When active, Rhino has a chance of blocking enemy Attacks, much like a Shield does. Leveling up Rhino with XP Potions increases the odds that Rhino will successfully fend off an enemy attack. At his base level, Rhino has a 10% chance of preventing an enemy attack.

Foxy is the first Pet you unlock when playing Coin Master but is also the most valuable later in the game. Foxy gives you an extra shovel in Raids, meaning you have one more chance to find Coin or dig up a Chest. Foxy unlocks at Village level 4.