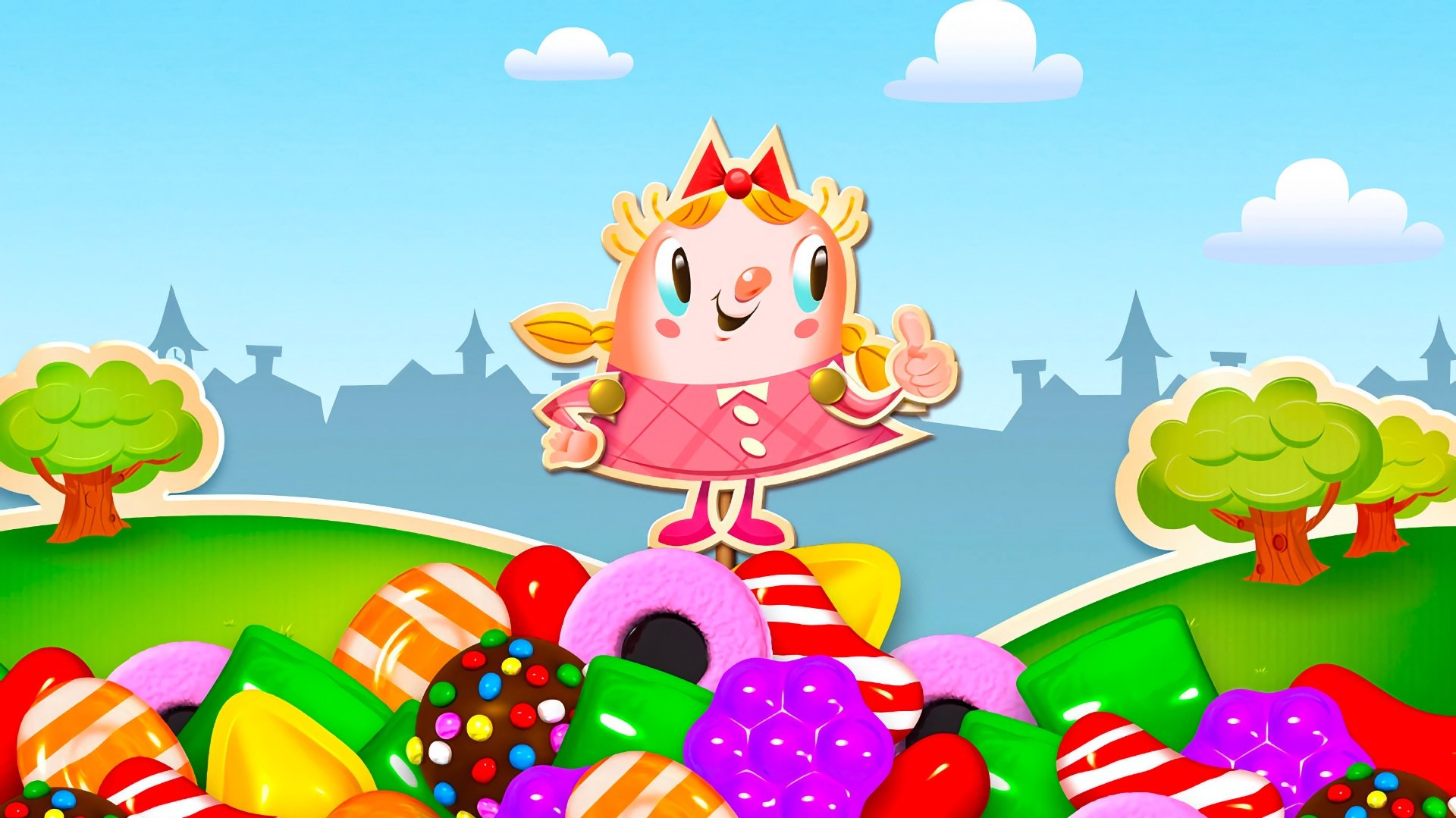 Thanks to this classic, King is crushing revenue projections.

Starting as a browser game, Candy Crush was released on Facebook in April 2012. The match 3 puzzle game would then be released progressively on mobile devices and Windows 10.

You might not know it has an actual name, but you must have tried or seen match 3 games before. In this genre, you have to match at least three identical elements present on the grid to make them disappear so that more could appear. Matching more than three simultaneously will result in different power-ups that will help you clean the map faster. Each map features a specific goal you have to reach, and for some match 3 games, there is even a time limit. Little by little, several obstacles will be forced on you, requiring you to have a better strategy… or enough money to buy more power-ups and advantages.

Like several other games from King, Candy Crush started as a browser game that could be played on their website or web portals. The game was then straightforward, with no variation in its gameplay. But when Facebook decided to also feature games on the platform in 2009, King seized the opportunity, seeing in it a chance to also break into the mobile games market. Their first game on Facebook and mobile devices was Bubble Witch Saga, which divided the game into levels with goals to allow the game to continue instead of waiting for the player to reach an unwinnable state (marking the end of the game). It then used the same formula with Candy Crush, renaming it Candy Crush Saga, adding more mechanics, and revamping the visuals. The game turned into the raging success we all know today with millions of players and huge profits.

The game has been around for nine years now and maintains its health, with ups and downs. But to try to understand such a success for a match 3 game, let’s put it under the microscope with the Candy Crush Saga statistics and facts.

When the game started getting more popular, most people wondered who their target audience could be. Who was investing so much time and money in a match 3 considering that the genre did not have a nice reputation back then and was even mocked? At the time, the changes brought by Candy Crush Saga were such a novelty that no demographics were known. So, who is playing Candy Crush Saga?

The game was primarily targeted at women aged 25-45.

The game has an enormous appeal for people from all walks of life and age groups. But it has been recognized that it is easy to find retired people, housewives, and convalescents among us. Women enjoy it the most for its aesthetics and relaxed vibe (men are said to be extra competitive in video games), and players, in general, appreciate how easy it is to pick up. The study was conducted in Germany, France, Great Britain, and the US. People defined as ultimate gamers enjoy all types of games and spend all their time gaming. They rarely have other hobbies than gaming. The popcorn gamer is a regular on Twitch and Youtube because they enjoy watching more than playing. Finally, the time fillers only play games when they have some time to spare, which is why mobile games are their favorites.

Not that the numbers throughout recent years are bad, all the opposite. Candy Crush Saga is still showing quite the following and has an astounding number of players. Nonetheless, we can still see how 2014-2016 were the game’s golden age, and we do not know if it will ever be back to such. 2020 improved the situation with an addition of 1 million players, but it was 2020: the year that allowed most games to get known/be more used since everyone was looking for entertainment at home. The time spent per day on the game must have also increased drastically for the same year. It is not an issue since the game is doing really well and still dominating as one of the most lucrative games on mobile.

People who were interested enough to download the game seem to be, for the most part, really into game apps that do not require to be too invested in terms of time and that are easy to play. It goes well with the demographics we have pinpointed above. Also, we can see that King does not even need to heavily promote the game everywhere to garner attention as most people look for it themselves or directly go on the iOS/Google Play page. That speaks volumes about the notoriety of Candy Crush Saga.

With such success, everyone is curious about topics focused on revenues, profits, downloads, and more information around the game itself.

Candy Crush Saga has accumulated a total of 2.7 billion downloads.

And counting. Even after all those years, the game is still downloaded pretty often. Some people have played for nearly a decade since the game’s inception, while others finally decided to give it a go. The fact that it still managed to accumulate over 100 million installs in 2020 is crazy enough. Even with the situation as we know it, it is still a significant number for a game like Candy Crush Saga. It still appeals to millions and is far from dying.

Candy Crush Saga was the first freemium game to generate over $1 billion in revenue in 2014.

Candy Crush Saga changed a whole industry by creating the business model of what a freemium game should look like and what it should do. After King’s game, all games in the industry going free-to-play would use the same strategy (for better or for worse). The concept worked well for them, as King is a lucrative company for Activision Blizzard. The numbers generated by Candy Crush Saga have always been the topic of heated debates over how the game is creating an addiction in players and taking advantage of it. The game already made history, though.

The difference between revenue and profit is that your revenue represents the amount made through selling your business’ main goods and services. In contrast, your profit is what will be left after all expenses have been considered. This means that with Candy Crush Saga, King is not only generating a ton of money coming directly from its community, but the company still sees profits high enough to make up for its different expenditures largely. After all, it is not like Candy Crush Saga is a game that requires high production and distribution costs. The perfect balance was achieved here.

Time to take a closer look at how the community consumes the game. The game has enjoyed worldwide fame since at least 2014 and saw a quiet but active community forming around the delicious app. What have they been up to?

The United States is the country playing the most with over 212 billion rounds played.

If we only pay attention to the total number of rounds played, the United States is indeed at the top. However, if we consider the number of rounds per player, Spain is #1. It is then followed by France, Great Britain, and the US. It’s a shame that those interesting stats are dated back in 2018: King released them to celebrate their anniversary. Hopefully, we will have an update from them for their 10th anniversary.

Players have played over 1.1 trillion rounds and swiped the equivalent of 70K miles every day.

And remember that those are from 2018! What would they look like in 2021? Or in 2022, when Candy Crush Saga will celebrate its 10th anniversary? Considering that they have managed to maintain a high number of daily to monthly active users, I think we would be right to imagine a new highest record and stunning numbers of swiping and whatnots.

King was right when they saw the future of casual games being on mobile devices. Their decision to join Facebook to give them a boost ended up being a life changer for the company. Candy Crush Saga was made for such devices considering the nature of King’s games: something that will keep the players busy when they have the time, that they can leave alone for a while and then come back to whenever they have a free slot in their schedule. And that, wherever they might be.

Candy Crush Saga snatched the top spot as the #1 most grossing puzzle game on iPhone and iPad.

It is an all-kill all across the board for Candy Crush Saga in those three countries: not only has the game been downloaded the most from there, but they are also big players. It is understandable to see the app falling in categories involving free games since it has already been heavily downloaded. It is even a wonder to still see it in the top 10 to 15. Spain shows that it is the most devoted country by scoring the best numbers. Also, notice how the game never falters in keeping its spot as the #1 with every country.

Not only is Candy Crush Saga free-to-play, but it is also elementary to understand and easy to play while also providing a great way to unwind and a little daily challenge. People were making fun of Candy Crush Saga when it started to be popular, and big numbers were introduced to the game because it was not considered a real game. However, they underestimated another layer of society: that one group of people not into games as we know them.

They found the perfect way to keep busy in waiting rooms, at home after a day of work, in their home every day after retirement, etc. King found the perfect audience. Plus, not only are they financially independent, but it is also possible to play the game without spending one cent, which means that they do not feel ripped off. Tough levels can be finished if you are tenacious enough, and you can wait several hours for your lives to replenish. Players rather spend money for advantages and boosters of their own volition.

The website where it all started, RoyalGames.com, was shut down in December 2021 after 18 years of operation. The company explained that the obsolete nature of Flash games and the ever-evolving technology used for websites led them to take the difficult decision. The news was met with many heartfelt messages from the users who reminisced fondly of their time on the website and what all the games and the community brought in their lives (some even got married). The forum is still available, though, and it is good news as Candy Crush Saga will be around for a while!