How long does pink last in World of Warships?

Here's a full explanation on what having a pink name means in World of Warships. 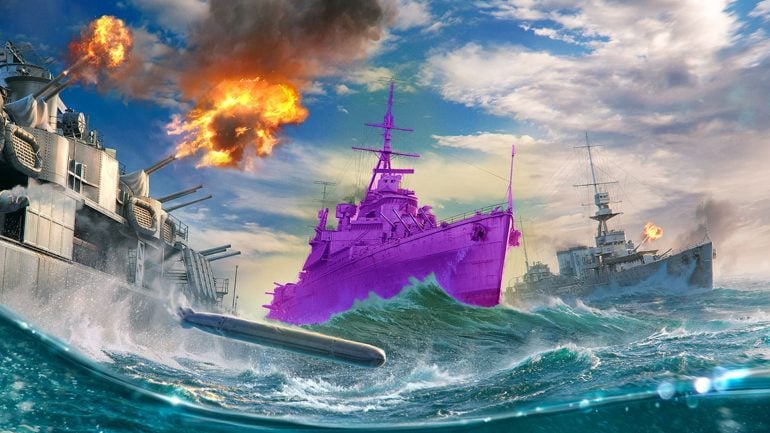 In World of Warships, your name turns pink as a warning for “unsporting conduct.” A pink name has no effect on gameplay, but it does act as a signal to your allies that you’re reckless with your guns or tend to AFK or leave matches early.

Who doesn’t like free stuff? Use these World of Warship promo codes for Doubloons and other WoWs rewards.

What is pink name status and how long does it last?

When you engage in actions that World of Warships considers “unsporting conduct,” the game will give you a warning in the form of:

If your infraction was friendly fire, then you’ll be hit with an additional punishment: “You will lose hit points each time you strike allied ships.”

A pink name is just a warning and is merely a cosmetic change. Gameplay isn’t affected. Pink name status will usually disappear after completing 2 battles without breaking the rules, though sometimes the penalty is longer.

If you keep breaking the rules, you’ll be given a penalty for unsporting conduct. This turns your name orange and blocks access to all match types except Co-op, Clan, and Training battles.

What counts as unsporting conduct?

Wargaming defines unsporting conduct as “player behavior that detrimentally interferes with allies’ actions in battle and affects their enjoyment of the game.” Examples of unsporting conduct include but aren’t limited to causing damage to allies, going AFK in battle, and leaving a match early.

In previous versions of World of Warships, you could deal damage to and even sink your teammates. This sometimes led to conflicts and griefing between players on the same team. Thankfully, allied damage was removed from World of Warships, but friendly fire is still tracked and punished in the game.

Friendly fire is defined as hitting teammates at least 15 times with torpedoes, collisions, or shells. The number of times you’ve hit allies is tracked over several matches.

What is the best cruiser in World of Warships?

AFK (going to “sleep”) during matches

If you spend 10 consecutive minutes in a match without taking action, World of Warships considers you AFK and will give you a 1-minute warning before booting you from a match. This counts as unsporting conduct and can result in a waning and your name turning pink.

Players who actively participated in a match for less than 75% of its full duration are considered to have left the match early. For instance, if a power outage causes you to disconnect after 7.5 minutes, you’ll be penalized if the match lasts for 10 minutes or longer.

Wargaming’s in-game punishment system is tough but fair. There’s enough leeway that accidentally shooting an ally or disconnecting for technical reasons won’t result in a penalty. Since the system tracks performance over several matches, only players who violate the rules many times will be punished. So, if you find your name has turned pink, just stop breaking the rules! It will go away after a few battles.

You’ve conquered the seas in World of Warships, now it’s time to take the land and air with this list of the best war games to play in 2023.

Games are more fun with friends. Get all your pals together and enjoy the best cross–platform games to play in 2023.