How to strafe in World of Warships

Dominate the skies with this simple technique! 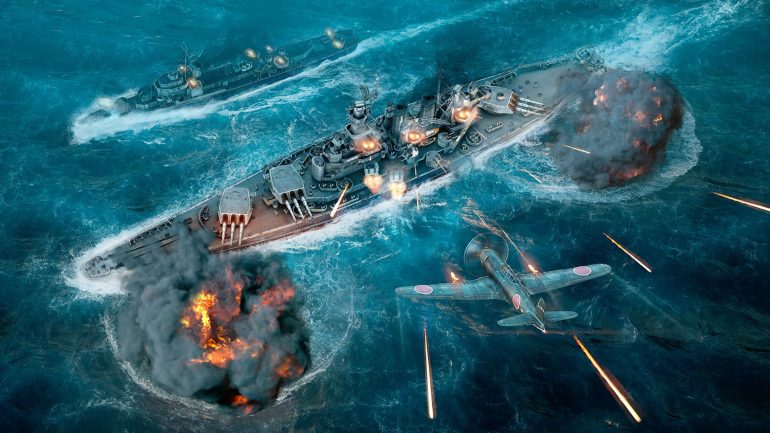 Have you ever wondered why enemy fighters seem to always obliterate your own air squadrons? Then you know what it feels like to be on the receiving end of a strafing run. Strafing is the other way fighters can fire, and when done right, it can be very dangerous. It also uses up a ton of ammo and hurts both enemy and friendly units, so be careful when you use it.

Knowing how to strafe effectively is a simple and effective way to instantly become more dominant in air fights. In this guide, we’ll show you both how to strafe in World of Warships and when to use strafing for maximum effectiveness.

How do you strafe in World of Warships?

To strafe, select a fighter squad and hold the ALT button. This will bring up a rectangle that indicates your fighters’ flight path. Any enemy planes caught in this area will be torn to pieces by your fighters.

A dashed circle also appears at one end of the rectangle indicator. This is the effective range of your fighters’ guns. Position your flight path indicator so that your planes engage the enemy within that circle. Starting a run too close to the enemy will cause your planes to overshoot the enemy position; too far away gives the enemy ship time to escape.

What is strafing in World of Warships?

In World of Warships, strafing is the technique of manually setting the flight path of an air squadron. Typically, when engaging enemy fighters, your own planes move in a cluster, flying about the combat zone almost randomly. When strafing, your planes follow a designated flight path, moving in a mostly straight line while shooting down any enemy planes they encounter.

What’s really happening is that the game is applying a special dogfighting bonus to your fighters. A proper strafe will almost always shoot down an enemy squadron that isn’t strafing. However, since strafing planes move in a straight line, if you set the wrong flight path, they may miss the enemy entirely.

When should I strafe?

Clever use of strafing will let you conquer the skies, but there are two very big drawbacks to the technique.

Strafing uses up a lot of ammo. If you overuse this technique, you’ll find you’ve run out of ammo very quickly, making your planes useless for the rest of the fight. For this reason, you should save your strafes for situations where you’re certain to engage with enemy fighters, for example, taking down a squad of incoming fighters.

Strafing damages anyone caught in the flight path—that includes friendly ships and even you! Poor strafing can lead to lots of unnecessary friendly fire, which can get you punished. There’s no turning back once you’ve set a flight path for a strafing run, so make double sure that you’re hitting the right guys!

Those were the basics on how to strafe in World of Warships. Strafing is easy and effective in the right hands but can be very risk if used incorrectly. You should spend some time in a practice session getting used to how the mechanics work before jumping into a real battle. Now get out there and shoot down some planes!