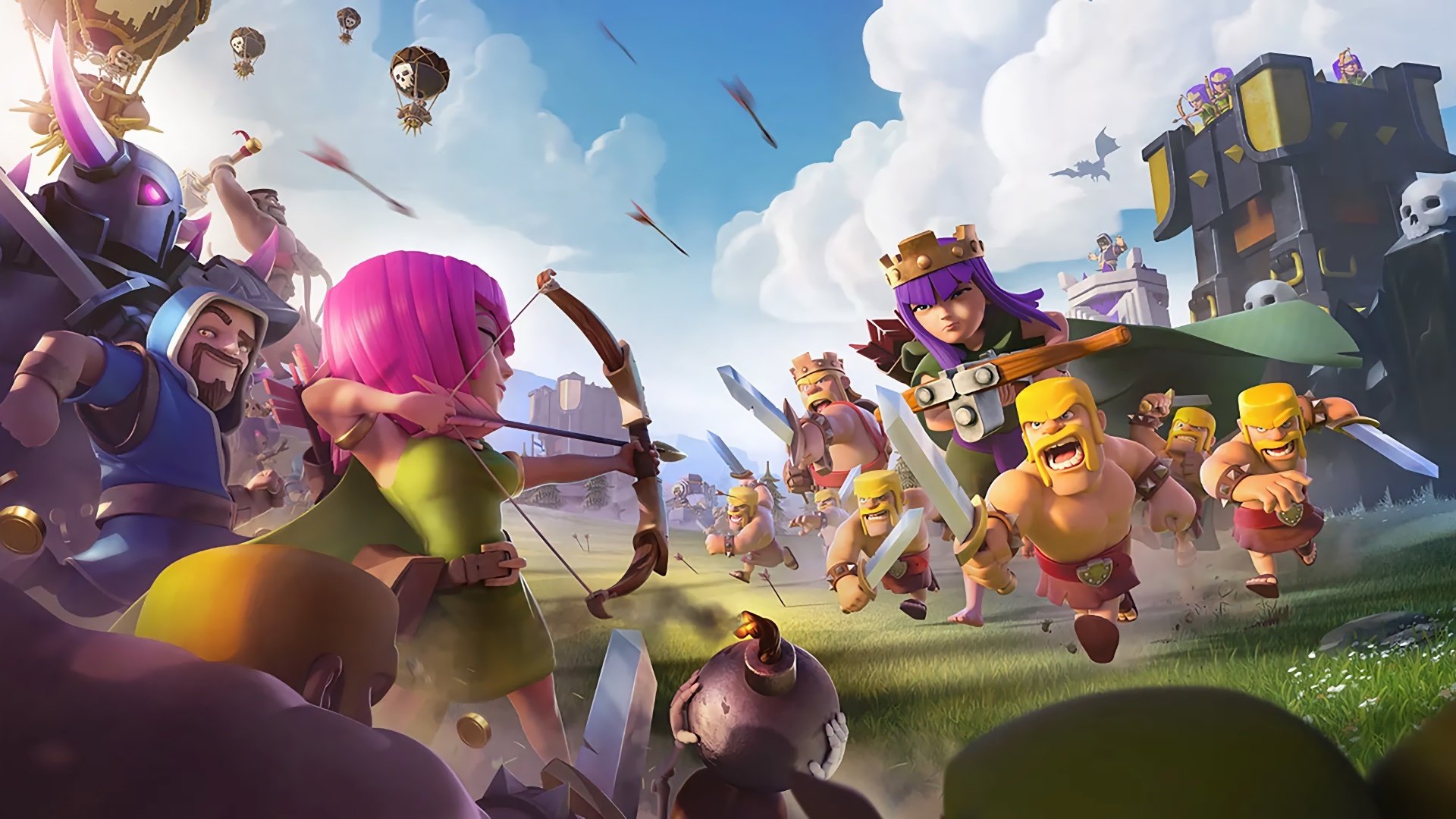 Clash of Clans is a free-to-play online multiplayer strategy game released in 2012 on iOS and one year later on Android. The game is PvP and uses the freemium business model. Subverting everyone’s expectations, the title is one of those mobile games that ushered mobile gaming in a new era and changed perspectives.

Here, the player is a village chief who is tasked to build and expand their village using the resources that can be acquired in different ways. Those resources (gold, elixir, and dark elixir) can be obtained by attacking someone’s village, as rewards, by producing them in your own village, or by buying them directly with medals. The resources can also be used to train your troops. Not only that, but players can also create an alliance (up to 50 people) who will fight together, give and receive troops and be able to chat with each other. A single campaign has also been included, and the player can gather different resources, with the most precious one serving as rewards at higher levels.

The game was developed by the Finnish studio Supercell, with the idea that mobile devices needed games that could be played for a longer time than just a few weeks. To do so, the devs used a skeleton, creating a system of interdependence between the different game elements. For example, if you need to store more items, you require a bigger storage house, but to do that something else needs to be built and at a certain level. Strategy games at the time were not much of a thing, as developers found that it was difficult to implement due to the limitations of the medium, but that did not affect Supercell, as few changes were made to the gameplay during development.

The game is not as popular now, but it is in good shape as these Clash of Clans stats and facts will reveal. If you want more mind-boggling and awe-inspiring facts and figures then check out our video games industry statistics for some great information!

Represented by their clans and the classes they chose to fight as, players in Clash of Clan are not just hardcore fans of strategy games. There are also a lot of casual players who found something easy to understand and that would be a bit of a daily challenge. Of course, since it is a PvP, players need to have a bit of a competitive bone. Thanks to the social aspect of the game when forming an alliance, there is also a real sense of community.

Players in Clash of Clans are predominantly male with 77%.

We can see that the player base is pretty mature, which also means that not only is the game rooted in a genre that suits more active and adult people, but their financial stability also translates into money being poured into the game whenever they need it to. A really famous player named Panda once shared how he would spend up to $7000, but that amount only accounts for 7% of his monthly income.

42% of Clash of Clans players are hardcore gamers and only 31% are casual gamers.

This poll shows that contrary to popular belief and just because the game is on mobile devices, Clash of Clans is actually a game to be taken seriously. It might not have been them, but the audience is mostly composed of people who are into games in all shapes and forms. It is also illustrated by the fact that way more Clash of Clans players are open to playing games like Candy Crush (that are on another spectrum) compared to the opposite. We can infer, based on the demographics and this profile, that there are a lot of adult men with a family, a job, and financial independence who have less time to play games as much as before but still want something that would be thrilling and test their skills. On a smaller scale, though.

Unfortunately, after 2016, Supercell stopped sharing the number of users. The company never really shared the daily or the monthly number of players, either. Information like that would come from websites such as Sensor Tower or Appmagic and that does not happen often. But from what we can see, the growth was organic

Clash of Clans has generated over $6.4 billion in lifetime revenue through microtransactions.

When Clash of Fire entered the stage in 2012, it took less than seven months to become the top game and the top-grossing game on iPhone in the United States. Something that was repeated when the game was finally released on Android. Looked down upon by console and PC gamers, the game was making huge waves in the mobile gaming landscape. It was possible to generate millions to billions with a simple game if you knew how to manage your formula. Because Clash of Clans did not create anything new in its gameplay: he used something that was already used and perfected it. The game counts on players’ unwillingness to wait for resources to be harvested and their willingness to spend real money on gems that would speed up the process. And when in 2019, Supercell introduced its Gold Pass, it drastically boosted the game’s revenue. Nowadays, the game is still earning money, but it is difficult to assess a monthly or yearly total.

Clash of Clans still makes a minimum of $1 million in daily player spending.

Time to take a closer look at how the game is consumed by the community. Clash of Fire was a global phenomenon during its heydays and is still played nowadays. The studio always makes sure to add new updates to bring novelty and the Gold Pass and its exclusive content that keeps changing are sure to keep the players entertained for a while.

United States plays Clash of Clans the most.

Leading by far, the United States might be the biggest market for this game. I say “might” because the participation ratio does not always translate into high player spending. But knowing the United States and how they spend on video games, there is a good chance it is actually lucrative. The game was banned in Iran for promoting violence, tribal warfare, and being way too addictive for young people.

There are a total of 7.8 million clans in Clash of Clans.

Clash of Clans shows its global reach with this ranking (the whole thing, not just the top 5). It is also a nice mix of everything, as no particular continent dominates over the rest. And since the game is not too demanding in terms of performance, it is open to people from all walks of life and not just individuals with deep pockets who can afford high-end phones.

The best clan in Clash of Clans is Bharat from India with a total of 56K trophies.

Now, when considering the clans on an individual scale, we can see that a good chunk of the top 20 is dominated by Southeast Asian countries and the Middle East. The first western country can only be found at #20 (Great Britain). However, #12 is an international clan, meaning that it is composed of players from different countries.

Clash of Clans is #2 on both iPhone and iPad in the Top Grossing Strategy Games category.

A rare occurrence, we can actually see data from China with this one. It will only be for iOS though since Android is not active in China. At least, not in a legal way. Other than that, even if China has downloaded the game quite a lot, it seems like players in the country are not paying much attention to it anymore. However, the West continues to give it a lot of love, considering that they are still spending quite the big coin for in-app purchases.

The title actually has its own eSports scene. It is the biggest out there, nor could it be said to be part of the biggest; but it exists. It is also really active, and they have not surpassed the $1 million threshold in prize money yet, but they might steadily get there, it is still a nice sum. Clash of Clans uses a format that is actually adapted for eSports: the game is focused on multiplayer and PvP, it involves strategy, players can form alliances and the pace is fast enough that an audience would not get bored.

The biggest prize pool in a tournament reached a total of $730,000.

Clash of Clans is not really the kind of title you would think about when saying eSports, but the community still managed to have its own slice of that cake. The circuit is still pretty professional, with something always happening and no shortage of players. The World Championship was canceled/delayed in 2021 and should happen during H1 2022 since the qualifiers are now over.

The French player Lenaide is the highest earner in the circuit with $110K.

It is true that South Korea is known for its huge presence on the eSports scene, but it is still a surprise to find them here, in a much smaller circuit. Who would have thought it could interest them? We can also find a lot of Japanese players, but French and Chinese players are ranking very well individually.

Germany dominates the circuit with its $361K earned with the highest sum of money awarded.

This list pretty much enforces what the list of individual earnings was already showing. France is actually the country with the lower number of players: less than 20 compared to the other three countries with 20-30 players.

There is that nebulous notion lately that a dead game is one that does not make the headlines 24/7, with its numbers displayed everywhere. Clash of Clans is clearly proving that that is not what it is all about. Showing longevity in the industry, while still making a nice profit and making your player base happy, even if the numbers are lower, is far from being dead. All the opposite. Nowadays, Clash of Clans is still topping the charts as a lucrative game and has nothing to be shy about.

The player base is loyal, but a lot of players constantly return to the game to feel that ping of nostalgia and still have a good time. Plus, the demographics make it so that players will not be fickle, turning to the last trendy app or game. Clash of Clans is one of those life-changing games that appeared in the 2010s and showed that mobile devices were not that limited if you knew how to play your cards correctly and adapt. Like with Candy Crush, an astounding number of copycats saw the light of day, trying to copy the formula, but never succeeding in making it their own. From the title to the graphics and the logo, Clash of Clans is definitely part of something that changed the mobile gaming landscape.