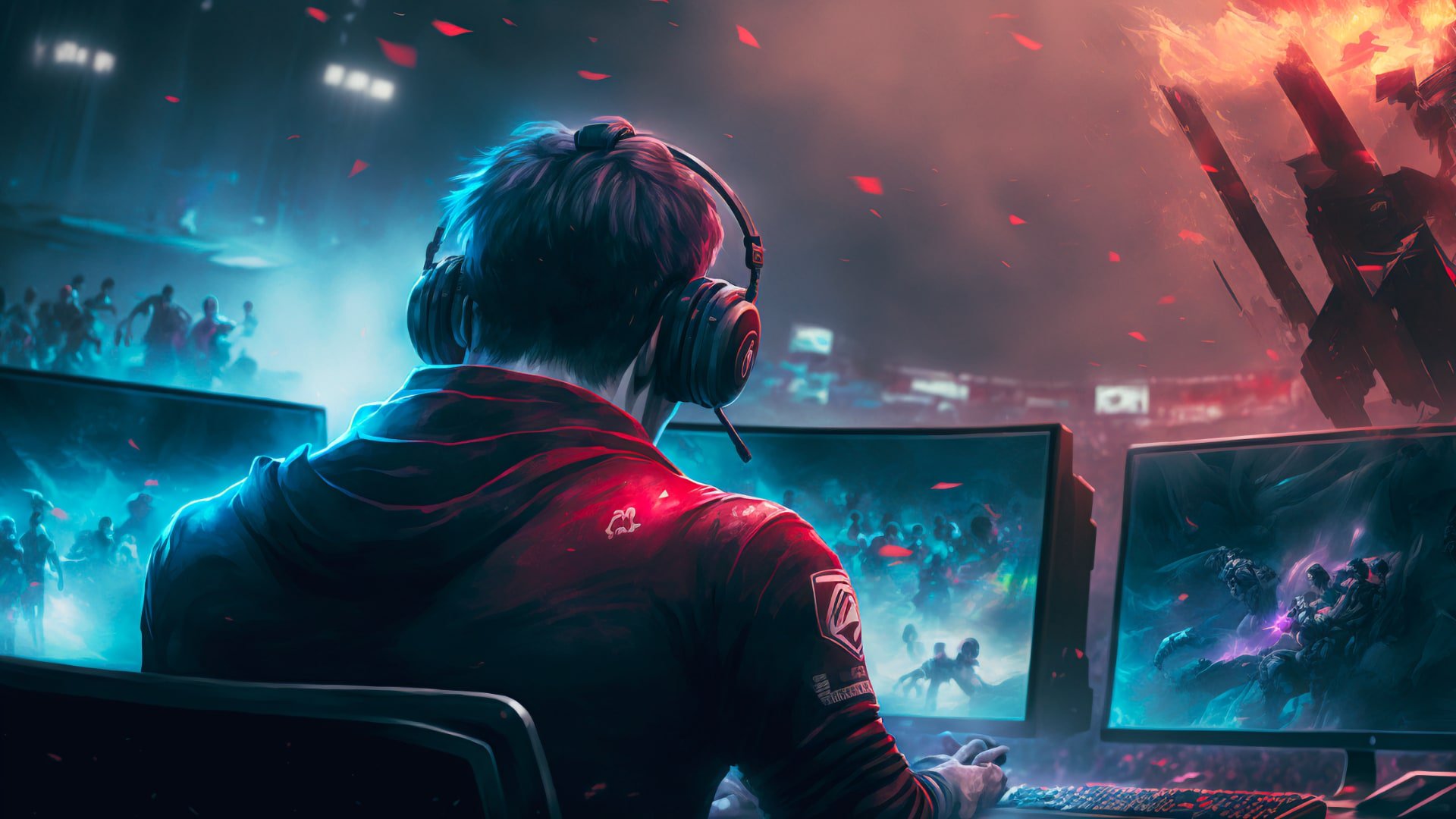 The esports industry is a game-changer.

Esports, or Electronic Sports, is a competitive gaming platform that pits players against one another in order to win. Often, this includes playing in groups to reach the goal as a unit.

Gaming in the form of esports has taken the world by storm. In a fairly short time, a slew of esports tournaments, sponsors, investors, teams, and fans have risen up, each with huge prize pools, large investment amounts, and millions of enthusiasts around the world.

Esports is an exciting industry that is rapidly rising in popularity, as proved by the following esports statistics. Playing and watching internet games has grown in popularity every year since the first esports event in 1972 and, the way things are going, can only continue to rise. That being said, if you want to learn more about the video games industry statistics then click on the link and prepare to be surprised.

Stats on esports that will amaze you

Take a look at these esports statistics to see how popular competitive gaming has become:

Statistics and Trends in the Esports Industry

The esports market is worth more than $1 billion.

In recent years, esports has grown in popularity. Its market value has risen up.

Despite a minor pandemic-related drop of $947.1 million, the esports business has grown.

There are an estimated 577.2 million people are predicted to follow esports.

In recent years, the esports industry has boomed, with a growing number of viewers tuning in to see their favorite games being played by some of the top players in the world.

There are around 234 million esports enthusiasts worldwide.

There were an estimated 197 million esports enthusiasts in 2019. A total of 200.8 million people watch esports on a regular basis.

By 2021, the number of Enthusiasts had risen to 234 million. There are also 240 million casual esports viewers.

Esports enthusiasts are predicted to number 285.7 million by 2024. In addition, 291.6 million viewers tune in on an occasional basis.

China now has the world’s largest esports and gaming community.

The esports market in the United States is projected to be worth $243 million. And it is now the second-largest esports regional market in the world.

The esports market in Western Europe is estimated to be worth $205.8 million.

Most investments in the esports industry are through series funding.

Because the esports industry is new, it is currently evolving at a quick pace. It’s no wonder that a number of celebrities, athletes, and individuals are investing actively in esports, with global profits exceeding $1 billion per year!

According to the given figures, the investor ByteDance led the investing world with a $4 billion investment in developer Moonton.

Activision Blizzard held an estimated 21.85% share of the market.

The COVID-19 epidemic, which prompted people to seek alternative sources of entertainment during the widespread cancellation of global athletic events, has boosted the esports industry in recent years. The worldwide esports market is largely fragmented, with a number of huge media and gaming industries owning considerable investments.

In 2021, Activision Blizzard, which is known for games like Overwatch and the Call of Duty series, was expected to have a market share of 21.85%.

In 2021, sponsorships in esports brought in more than $600 million in market income.

In 2021, esports sponsorships are estimated to generate $641 million in market income. This is the most major segment of esports revenue, accounting for roughly 60% of overall revenue.

In the esports industry, media rights are supposed to generate $192.6 million in income.

Around 80% of sponsorship is from the gaming hardware & peripherals industry.

Gaming Hardware & Peripherals is responsible for over 80% of all sponsorship deals in the esports industry. This is followed by furniture and energy manufacturers in second and third place respectively.

The U.S. ranked first with $180 million in prize money.

The graph illustrates the world’s highest-earning esports countries, as measured by prize money won. Chinese esports gamers are expected to earn almost $152 million in esports events, according to projections. With prize money of $180 million, the United States came in first.

With $432 million in total prize pool, MOBA game tournaments have the highest payouts.

By far the most popular genre of esports games in terms of the total prize pool are Multiplayer Online Battle Arena (MOBA) games. The top five in that genre are Dota 2, League of Legends, Arena of Valor, Heroes of the Storm, and SMITE. In second place are first-person shooters, and battle royale in third.

The graph shows the top esports tournaments in the world, ordered by the total prize pool. Dota 2 came in top, with a total prize pool of $276 million, as shown in the pie chart.

The International 2021 had the highest prize pool of any tournament with a fund of $40 million.

The statistics show the top esports tournaments in the world, ordered by the total prize fund. The International 2021, which is an annual Dota 2 tournament organized by Valve, was ranked first at the time of measurement, with a total prize fund of $40 million. The game dominates the top charts with 6 tournaments each consecutively with a larger prize pool than the last.

The Free Fire World Series 2021 became the most watched esports event of all time.

In recent years, the esports industry has flourished, with an increasing number of viewers tuning in to watch the top gamers in the world compete. With 5.41 million peak viewers, the 2021 Free Fire World Series, a Free Fire championship hosted by Singapore, became the most-watched esports event of all time. With roughly 3.99 million peak viewers, the 2019 League of Legends World Championship was the second most-watched tournament.

Team Liquid has won more tournaments than any other esport team, but also played more.

Team Liquid, which was created in the Netherlands but is now based in the United States, was the leader on the list at the time of the evaluation, with total prize money received over the course of the team’s lifetime totaling more than $37 million after competing in a staggering 2051 tournaments. In second place and arguably the most efficient in terms of tournaments played and earnings is OG, earning $35 million with just 121 tournaments.

The chart displays a positive relationship between tournament participation and earnings, but outliers like OG exist. If you participate in more tournaments, you will have a better chance of earning money. On average the top 100 teams in esports participated in 263 tournaments.

FaZe Clan dominates on social media with a total of 26.6 million followers.

In February 2021, the FaZe Clan was the most popular esports team worldwide, with followers of more than 26.6 million on social media.

Team SoloMind was the second, with more than 6.5 million social media followers.

Over $7 million has been won by Johan Sundstein (N0tail) the highest earning esports player in the world.

Danish player and OG captain Johan Sundstein, also known as N0tail, is the highest-paid esports player as of March 2021, with a total of $6.97 million.

Six esports players have now won a total of more than $5 million. Three more have surpassed the $4 million thresholds.

In contrast, Sasha Hostyn (Scarlett), the top female esports player, has only earned $400,000.

Publisher Riot’s games (League of Legends & Valorant) are the most watched.

Riot Games is the publisher behind the global MOBA sensation League of Legends and the hero shooter Valorant. Riot Games’ games were watched for a total of more than 35.5 million combined streaming hours.

Despite the hurdles that this new industry faces, the esports market is expected to continue to expand. More advertisers and sponsors will naturally invest as the number of active streamers and viewers increases.

At this rate, esports has a chance to outperform current market predictions in terms of overall income, audience, and investment. It’ll be interesting to observe how it interacts with the gaming business in the future.

Indeed, the esports industry is one to keep an eye on, regardless of the course it may eventually follow.