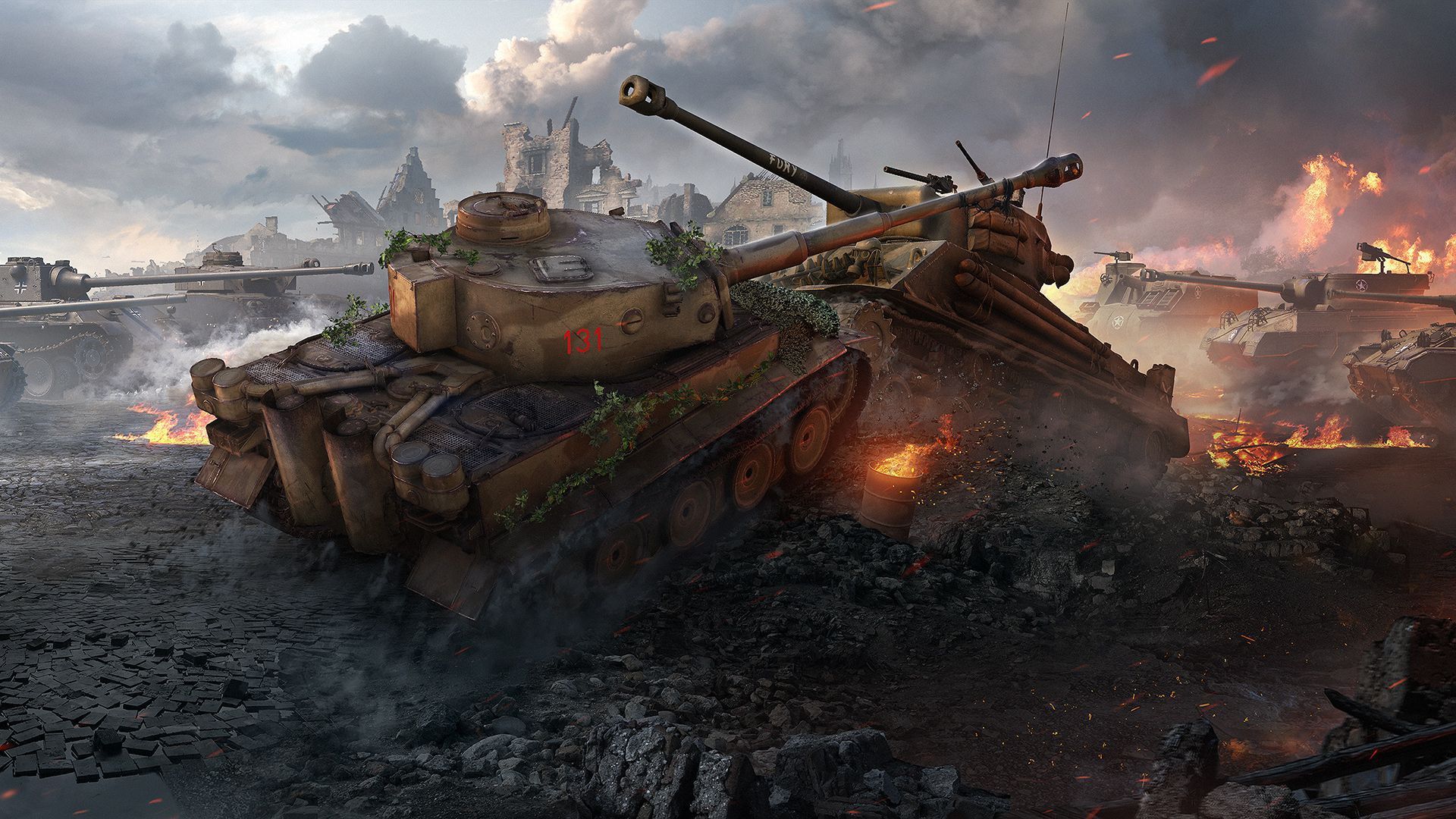 World of Tanks (WoT) is a massively multiplayer online game throwing the player in an all-out war featuring tanks… a lot of them. The game focuses on player vs player gameplay rather than player vs environment. It is free to play, but it uses a freemium business model, meaning that you can download the game for free, but you will have to pay to enjoy some advantages in-game.

World of Tanks is a veteran, as it was released in 2010 and has been on the scene for 11 years now. WoT is the most lucrative and most played game created by the Belarusian company Wargaming, their golden child. They decided to bet everything on it before its release, so much that a month before its launch in Russia, the company had nothing left in its wallet. It was a big 0. The developers survived the last month thanks to family and friends and their blood, sweat, and tears were widely rewarded as World of Tanks was a striking success upon release. The game has actually two versions: the normal World of Tanks on PC, PS4, and Xbox 360/One, and World of Tanks Blitz released on mobile devices and later on Switch and PC.

The vehicles are actually pretty faithful to their real-life counterparts (which shows the dedication put into the game). There are two in-game currencies: the credits that you can freely earn in the game or redeem through Wargaming codes and the gold that you have to purchase from the in-game store to be able to buy premium content. Players can also create their own clan, build a stronghold, expand their zones of influence based on membership and go to war against another clan.

As you can see, the game is pretty complete and after it celebrated its 10th anniversary, it might be a good time to crunch as much information as we can. A whole decade for an indie MMO game coming from a small company deserves retrospection and here are the latest World of Tanks stats and facts to do just that. Video game facts and figures are always surprising and if you want to learn more about the industry then head on over to our video games industry statistics piece for more figures and data.

Blitzing through the map with their shiny and customized tanks, ready to wreak fiery havoc on their rivals, players in WoT are their own captains. Eleven years later, they are still around, still loyal and still firing those rounds in a sea of metallic chaos.

Most players are 25 and up.

Are we surprised? No. First, the dominant gender. The game is all about big tanks, not a topic that a lot of women will relate to, even if they are huge gamers. I have been gaming since I’m 6 and if I do see the value of the game in its gameplay and concepts, I have no interest at all in those big, chunky, and manly tanks. Second, the age range: the game does not require you to be quick on your feet, no need for twitch reactions. It is strategic and will require that you think about your movements. Apart from that, the tanks look realistic, it is not gory nor bloody and the substory around WWII are magnets for people from all walks of life.

World of Tanks has over 160 million registered users.

Throughout those 11 years, WoT managed to make sure to continuously score new users, up to millions of them per year. Sure, like with a lot of MMOs, they have lost quite a big chunk of those users who stopped playing after some time. However, the game is still making numbers. In addition to that, they have still managed to make more than 100,000,000 people download and play their game at one point in their life (with some even coming back years later).

As of April 2021, World of Tanks Blitz has been downloaded 140 million times across all platforms.

The result of a ‘dinosaur’ of a game. Wargaming has always made sure to provide content, but also to promote itself to new crowds. It was not that long ago that a lot of gamer YouTubers were advertising the game at the beginning of their videos.

In September 2020, WoT was ranked #6 in the Top Grossing Titles (PC) category.

Players in WoT gladly spend their money to buy premium content, that is for sure when looking at the astronomical profit the company makes out of microtransactions alone. It goes hand in hand with the fact that a big chunk of their fanbase is made of adults already working.

World of Tanks Blitz earns an estimated $2 million every month.

The store is full of offers, items, and specials, so it is easy to understand why so many players are tempted. Plus, to always stimulate diversity in their lineup, Wargaming often has collaborations with different brands. They even had one with a Japanese anime full of cute girls and Panzer.

In 2014, World of Tanks had the highest average revenue per user of any game in the world.

Believe it or not, 2 of them are “Still Playing” awards. Its concept was also acknowledged and rewarded.

The countries with the highest number of players are the US, Ecuador, and Canada.

It is a bit surprising to not see Brazil as they tend to really like multiplayer games.

World of Tanks has a selection of over 600 armored vehicles from 11 nations.

The game can be pretty technical when giving the specs of those vehicles. As you can see, the best tanks are Tier V and up (Tier X being the weakest). A lot of work must be achieved to obtain them…or a small swipe of your credit card.

World of Tanks is ranked #57 on Twitch.

Streaming is also working well for the franchise. Notice how the number of viewers tends to increase during the weekend: might be because, during the week, a lot of the players are at work.

World of Tanks Blitz is ranked #742 on Twitch.

Blitz is the lesser version with fewer people in the platoons and lesser graphics, which could explain the lack of streaming. However, we also saw that most people on Steam went for this version of the game (since it took ages to release the better one), so what gives?

Starting with PC through its own platform to download the game, World of Tanks has slowly made its way on most consoles and is now available whether you are on a bus, in your bed, or comfortably sitting on your couch.

It is a bit weird that Wargaming released the first version of the game, the one with 15 vs 15 and more content, only recently on Steam. We can see that it has some trouble starting strong, even though it is not the pits.

The game is still doing really well and stays active around the clock. A lot of updates and events are still added, so the community has content to play with. But those numbers are great to see because they are extremely balanced: there is no drastic drop between them. Blitz is also a nice alternative for players with not-so-powerful PCs.

As of April 2021, World of Tanks Blitz on Switch has surpassed 1.5 million installs.

A lot of users were discontent with the game because it was just a ported version of the mobile game. The limited number of players during a versus, a type of vehicles not being included and the poor graphics did not please them at all (even if the gameplay was still as fun). It is worth noting that this is what is happening most of the time with the Switch when mobile games are released on the console: they barely get any new enhancements.

The game was generally well-received by critics, but the learning curve is a pain point.

The game is pretty popular with critics and users tend to appreciate the different ports. A point that is often highlighted in their reviews is that WoT is addictive and extremely entertaining, but the matchmaking is horrendous and it can be a bit difficult for newbies. See our review on WoT to get an in-depth look into how the game works.

Are you surprised? The game is a popular PvP with tanks and strategy. It was made for eSports.

The biggest prize pool in a tournament reached a total of $308,494.

WoT has been part of the eSports scene for ages now. There are more than 50 tournaments out there centered around the franchise. Amongst the big ones, you can also find the smaller local ones  (mostly in Russia).

The top 3 of the highest-earning players are dominated by Russia.

Russian players have been loyal, active, and really good since the inception of WoT. It is no surprise to see them dominating the tournaments. You will actually find a lot of big-earning players from Eastern Europe.

Russia is dominating the chart as the top country with $1.3 million won in total.

China really is trying to shine in almost every multiplayer game on the eSports scene. Congratulations to Greece though, as they have managed to enter the chart with just one player.

World of Tanks is an enigma. A lot of people have never heard of it, and when they did it must have been during their campaign on YouTube. But the game has been around way longer than most games we know nowadays. And even better: for a small MMO developed by a really small company, it touched the sky and went beyond.

After 11 years, the title is still going strong. From their profit to the number of active players, everything is stable. Of course, nothing is perfect and Wargaming had to go through some losses, but nothing strong enough to kill their spirit. Today they plan to hire 100 more people to work in their new office in Lithuania. Wargaming knows its public and what they want, they keep updating the game (they have done so more than 100 times by now) and they often have events and special missions.

The game is not perfect: the players complain about the terrible matchmaking that will pit Tier IX players against Tier II players, the premium content that causes a big imbalance, and some hiccups with the gameplay… but other than that, nothing major. We can only hope that the game will continue to walk the flower path.