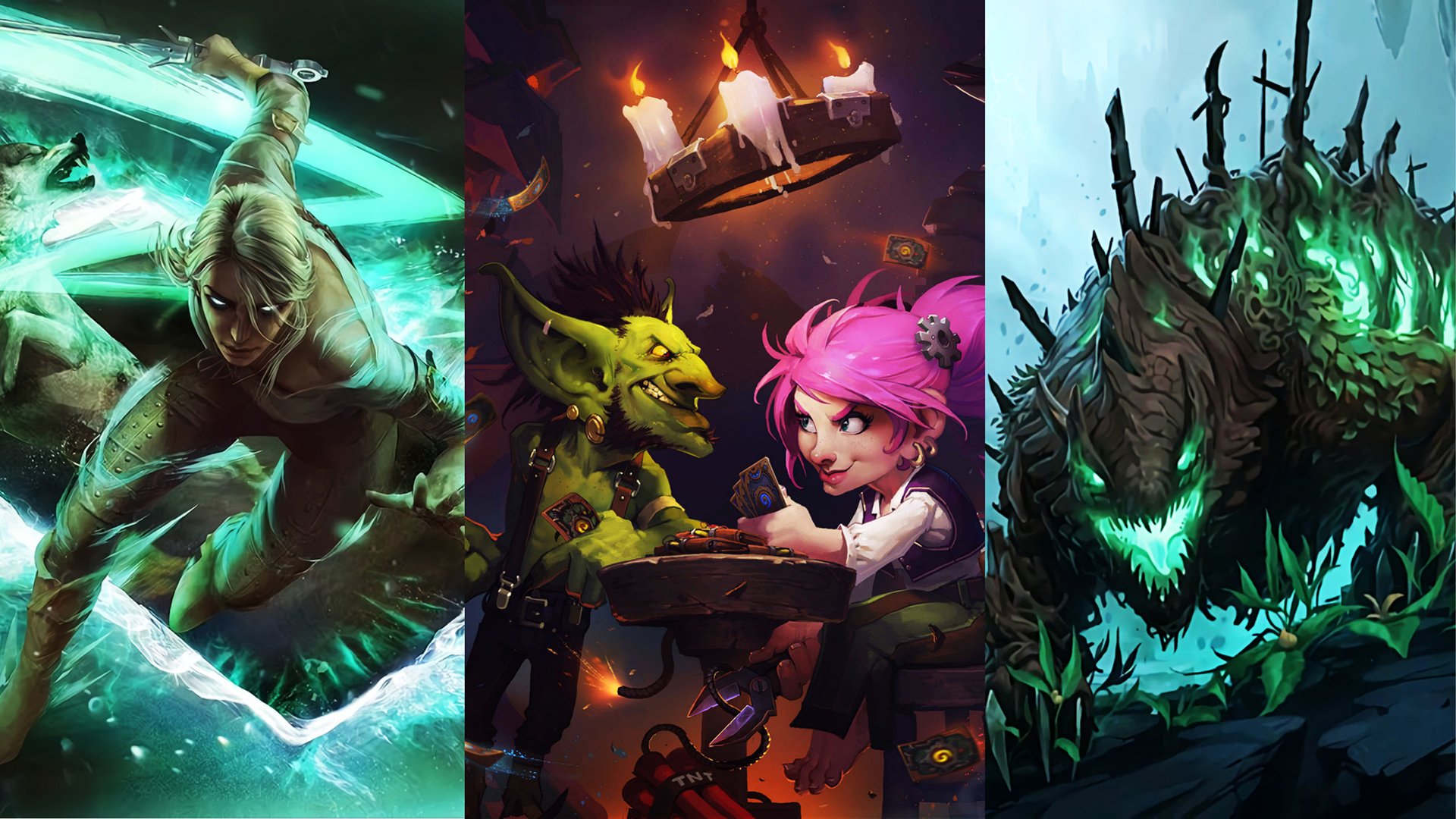 Grab your deck and outwit your opponents in these incredible titles!

When you want to think tactically and engage opponents in battles of skill, online trading card games are the way to go. They have the right mix of strategy, lore, and mechanics that have to be mastered before you can utilize each facet of the game efficiently. They offer you a thrilling experience that is worth all of the practice you out in.

But what are the best online trading card games? Well, we’ve prepared this list so you don’t have to go to a different corner of the Internet to get your information. These games are titans of the genre with their own worlds, lore, and rules that need to be adhered to, which is what makes them fun!

Once you’ve had your fill of all the cards you can fit in your hands, you could branch out to new genres. If that’s your intention, we have just the thing for you. Take a look at some of our other articles to find new games that pique your interest. We have action-packed lists like the best WW2 games, as well as some lists that won’t break the bank, like the best free PC games!

Starting strong, we have Hearthstone, arguably one of the best online trading card games out there. The style of the game is heavily based on the Warcraft series, featuring the most prominent characters from Warcraft, as well as a wide variety of creatures and spells, as well. Players choose a hero that has a certain playstyle to if. For example, if you choose Hunter, you will lay out trap cards and summon beasts to aid you in combat, while a Mage will use spells and spell buffs to increase their potency. As you play and defeat opponents, you can collect a myriad of cards ranging in rarity from common to legendary. Adding the best cards you have to your deck will help you improve in games and give you an edge over your opponent. It is a very immersive game with a lot to uncover, making it an icon in the world of video games.

This game is the product of players absolutely obsessing over the mini-game located in The Witcher 3: The Wild Hunt. Players can easily spend hundreds of hours looking for poor sods to challenge to a match of Gwent, so CD Projekt Red decided to make it its own thing and let players enjoy all of the charms of Gwent without needing to play The Witcher 3. In Gwent, you have a deck of cards containing various classes of units and spells. The goal is to play your units in a way that will secure you the most Power points. Each unit has a Power value assigned to it, and adding units to the board will give you more Power points, while removing units will do the opposite. The players can either play all of their cards or pass to the next round, and the player with the most Power points after 2 of 3 rounds will be declared the winner. Being good at Gwent requires you to be shrewd and tactical, which is very appealing to most people, and is something you look for in the best online trading card games.

In 2020, Riot Games decided to branch out their industry into more diverse games, coming out with an auto battler, a tactical shooter, an adventure game, and a collectible card game. Each of these games follows the same tropes of classic games, but with a little League of Legends flair added to them. This is fantastic because the best online trading card games should think outside the box with more interesting characters. In Legends of Runeterra, you battle another player in a classic card arena. Each round you are given 1 mana point that you can use to summon units and cast spells. As the game progresses, each player will get more mana points, up to ten. When you place a unit on the board, it will automatically defend your Nexus, and any other units that want to attack the Nexus have to get through that card first. Because of this, you have to think ahead of your opponent to place cards in a way that will give you a free shot at the Nexus. This is a very thrilling game with a steep learning curve, but it pays off.

This game is essentially just Gwent, but with a heavy shift in the main focus of the gameplay, which is a completely new story that takes place before the events of The Witcher 3: Wild Hunt. Of course, this does not detract from its status as one of the best online trading card games. In this game, you play as Meve, the Queen of Lyria and Rivia, and her quest to assail the northern realms to take them back. There is a lot of decision-making in this game and your decisions can drastically change the course of the story, as well as the cards in your deck. For example, you can meet a small lord and win his friendship. This interaction will add him as well as his units to your deck so you can use them in battle. Maintaining these relationships will ensure that you still have cards to play and something to rely on, so you have to be careful. The campaign is 30 hours long and quite well-written, so if you’re a fan of Gwent and want more, take a look at this game!

The game that launched a whole line of deck-building games, Slay the Spire is among the best online trading card games that has an excellent premise and style of gameplay. The gameplay is reminiscent of a roguelike game, where players have to ascend a spire and defeat any enemies they come across. To do that, you have to start at the bottom of the spire where you’re given a small deck of cards, some health, a relic, as well as some gold. From here, you continue to the next level, coming across enemies. Defeating these enemies will give you extra cards to add to your deck as you progress further. Enemies will become stronger and more difficult to defeat, forcing you to be more careful and think strategically. The gameplay is very satisfying since there aren’t too many nuances. All you have to do is release your attack units and buff them so they can defeat the enemies of the level. After a few attempts, you’ll notice that the game is very addictive and fun to play time and time again.

One of the best online trading card games ever, Magic: The Gathering has amassed millions of fans all over the globe who love going to conventions and competing against other players to see who is better. Magic: The Gathering Arena is a digital version of the cult classic, and offers many of the same features, with the added benefit of being more animated and easier to keep track of. Players have decks of assorted unit cards, as well as land cards. Land cards allow you to determine the type of terrain your units can use to move, as well as the color of your mana pool. There is a wide variety of units, spells, and special abilities you can use to reduce your opponent’s health pool to zero, and the endless possibilities of realizing this are what makes Magic: The Gathering so appealing to anyone who likes card games.

Faeria has a very interesting gameplay concept that is, in theory, difficult to execute, but it does it extremely well. Instead of the classic battle board approach, this game has the concept of a “living board” made up of empty hex tiles that you can fill with land to summon units. Each round you are given three mana points that you can use to perform actions, and these points can be further increased by gaining control of the mana wells on the board. Using your mana points, you can summon different units and use spells, but a large part of the game involved adding land tiles to your territory. Land of a specific type will allow you to summon special units that can only be summoned on that land type. The concept of a Power Wheel is also introduced, wherein you can spin it to determine which action you can perform during your turn. Whoever decreases their opponent’s health to zero is the winner. Take a look at all of this originality and you can’t deny that this is one of the best online trading card games.

Fans of the original Yu-Gi-Oh! series will be enthralled by this new game. Yu-Gi-Oh! Master Duel is the newest addition to the series, with new, high-definition graphics and a refined combat system. It is one of the fastest-growing and best online trading card games in 2022, amassing over 10 million downloads since its release. In the game, you play in the same way as the classics — place units on the board in either a defensive or offensive position, place trap cards, and outsmart your opponent with clever moves. The entire experience is made more enjoyable by the stunning graphics and well-made visuals, so you can get the full Yu-Gi-Oh! ride like never before!

An incredibly complex game, Eternal has a very unique style and follows the classic mechanics of card-collecting games. Winning matches and completing quests will give you gold and new cards. Gold can be used to purchase cards from the store. When it comes to the gameplay, players have a deck that is a mixture of Power cards, as well as the other types of cards that are made available through the use of power cards. From here, the gameplay is very reminiscent of Hearthstone, where the use of units, spells, and buff is paramount for victory. Something that other games do not have is the presence of Sites, a special card class that takes up two spaces on the board and has special mechanics, such as casting one spell every turn, or summoning a Hero after certain conditions are met. Once you get into the game, it can feel very addictive and engaging, which makes you play even more. Overall, it’s one of the best online trading card games!

Todd Howard, you did it again! The Elder Scrolls: Legends is a game where 2 players battle each other using spells and creatures from the Elder Scrolls series. Of course, the classic gameplay approach is present, where players each have a deck of up to 100 cards, and each turn they draw a card and get a Magicka point. Similar to Hearthstone, Magicka is required to use your spells and units, and the one who decreases the opponent’s health to zero is the winner. Something that differentiates this game from other best online trading card games is the fact that there are two lanes on the board. A unit placed in one lane can only attack other units inside that same lane, adding more depth to the general gameplay dynamic. To keep everything fresh and interesting, there are five gamemodes that you can play, each with a drastically different theme from another. This game is a very nice, new approach to the Elder Scrolls series, and is very welcome.

And there you have it! Some of the best online trading card games available at the moment! There is something for everyone, so go and take your pick. Maybe you will find a new regular game! If you’re still looking for other games, you can always check out the best tank games, as well as the best naval games!