Best Minecraft gun mods that you need to download 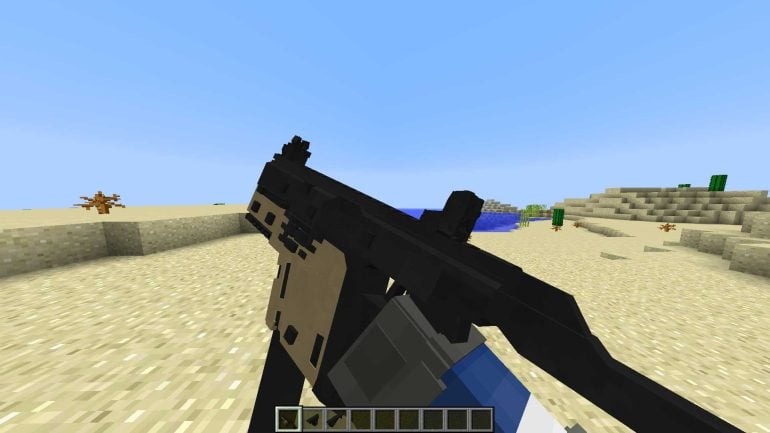 Minecraft is a cultural phenomenon.

One reason for that is the simplicity Mojang made central to the entire experience. You fire up the launcher, log in, and you’re immediately transported into a blocky world in which you’ll quickly find yourself immersed.

But that simplicity comes with its downsides. Sometimes when you spawn in, you might not be content using just a diamond sword or iron pickaxe to slaughter creepers.

That’s when the other reason for Minecraft’s success comes in: the game’s active community of modders, who have created more add-ons for Minecraft than perhaps any other game out there.

So, when it comes to Gun Mods, they’ve got you covered.

Before we start, a quick disclaimer. For this list, we’re going to focus on Minecraft Java Edition, avoiding mods for Xbox or Android Pocket Edition for now.

pWn3d_1337’s Techguns is a mod that adds a massive range of custom guns to Minecraft.

From modern weapons to some more futuristic options like lazer-beams and plasma canons, the modpack also adds 3D models, ammo, recoil & reload animations and brand new death effects – some of which are a bit gory, to say the least.

Techguns isn’t just a gun mod, though. It also adds new NPCs (including enemies who themselves use weapons), unique crafting benches, UI changes and a couple of new blocks, too. If you’re looking for an all-in-one gun mod, this might be the way to go.

Not a gun mod in the traditional sense of the term, but it’s a mod with a gun in it, so I’m going to include it anyway.

The Portal Gun mod basically turns Minecraft into one of Valve’s most beloved games, Portal. It adds beams, turrets, and weighted cubes for puzzle solving and emotional support. But most importantly, it adds the titular Portal gun, a device which allows you to navigate biome terrain like never before.

The device is simple: it shoots two different coloured portals. You jump in one, you come out the other. You can also use the portal gun to pick up solid blocks and mobs with the ‘G’ key, sort of like the gravity gun from Half-Life.

MrCrayfish, a YouTuber with over a million subscribers and apparently also a children’s arms dealer, has come up with one of the most interesting gun mods I’ve seen yet.

Instead of adding a ton of different guns to Minecraft, MrCrayfish adds just a few. However, they’re highly modular, meaning you can add a bunch of different attachments to them to create infinite numbers of new guns! MrCrayfish continues to add new attachments as he goes, so this is definitely one to keep your eye on!

The Combat+ Mod is almost the complete opposite. It throws spaghetti at the wall and sees what will stick, adding a bunch of weird and wonderful weapons to the vanilla game.

Combat+ adds syringes, javelins, glass swords, bombs, flashbangs, TNT launchers and even radioactive cacti. Best of all, Combat+ even comes with a flamethrower, which is a griefing game changer.

CrackShot is a Minecraft Bukkit server plug-in which gives you an arsenal of guns and weapons to choose from in your multiplayer worlds.

For a plug-in that doesn’t require mods, these guns feel amazing. Although you’ll need a resource pack to get them actually looking like guns, they are effective and widely customisable. There’s also shop integration, meaning that you can establish gun stores on your server… and then rob them… with the guns.

You’re not likely to use this one in singleplayer, but it’s a good solution for adding guns to multiplayer without a bunch of hassle.

The Minecraft Fortnite mod looks amazing, but most importantly it features some of the most realistic weaponry available in the game today.

With most mods, holding a firearm basically just feels like holding a regular Minecraft item that looks a bit like a gun. It’s certainly not very immersive. But with the Fortnite mod, you’ll get a number of fully 3D-modeled weapons with FPS mechanics. You can even aim down your gun’s scope.

You can’t do the dances though… thankfully.

Okay, this one features a LOT more than guns. But the guns Age of Weapons does offer are pretty cool, on top of everything else that comes with the modpack.

Age of Weapons adds 300 items, blocks, tools and new weapons to the base game, some which have their own effects and features. These items span from the stone age to today, including everything in between. It’s probably the most comprehensive weapons pack around today, so certainly worth a look. Sadly, though, the current version seems to be quite buggy and it’s unclear if the mod team is still working on the project.

But maybe you’re not looking for an expansive anthology of all the weapons from recorded history. Maybe you’re just looking to focus on one of the coolest gunslinging eras. If so, Derdon1998 has you covered.

The Wild West Guns Mod recognises that a lot of other weapon mods look a bit better than it does. The guns look fine, mind you, but that’s simply not the intention. Instead, Derdon1998 attempted to focus “solely on gunplay”, working hard to make these weapons feel fantastic and adding complex combat dynamics to worlds with them in it.

Just like the ol’ West cowboys, this is a mod more meant to require immense skill and strategy to succeed in shootouts. If you just want to go massacre some villagers, perhaps best to look elsewhere.

The Modern Warfare Mod offers a huge (and ever growing) catalogue of 3D modeled weapons, armours and equipment. Like the Fortnite mod, these are designed more to look like an actual FPS than to look like your standard Minecraft affair. If you’re familiar with Modern Warfare, or really any FPS set in the present, you’ll find all your favourite weapons here. Better yet, each is customisable with attachments and scopes, just like in CoD.

Maybe, after reading through this list, you’ve realised that perhaps picking up an AK-47 and mowing down flocks of noobs might change the nature of the game a bit. There’s probably a reason, after all, that Mojang hasn’t included fully automatic combat rifles in vanilla Minecraft.

But if you’re still wanting a more wholesome FPS Minecraft mod, look no further than the Airsoft Mod. The mod features all the weapons you’re familiar with – SCAR, M4A1, H&K – but this time they’re not filled with deadly bullets but BBs. It’s more of a natural looking Minecraft aesthetic, but the fact the modpack also comes with a Capture the Flag mini-game mode means that it’s certainly worth giving this one a try.