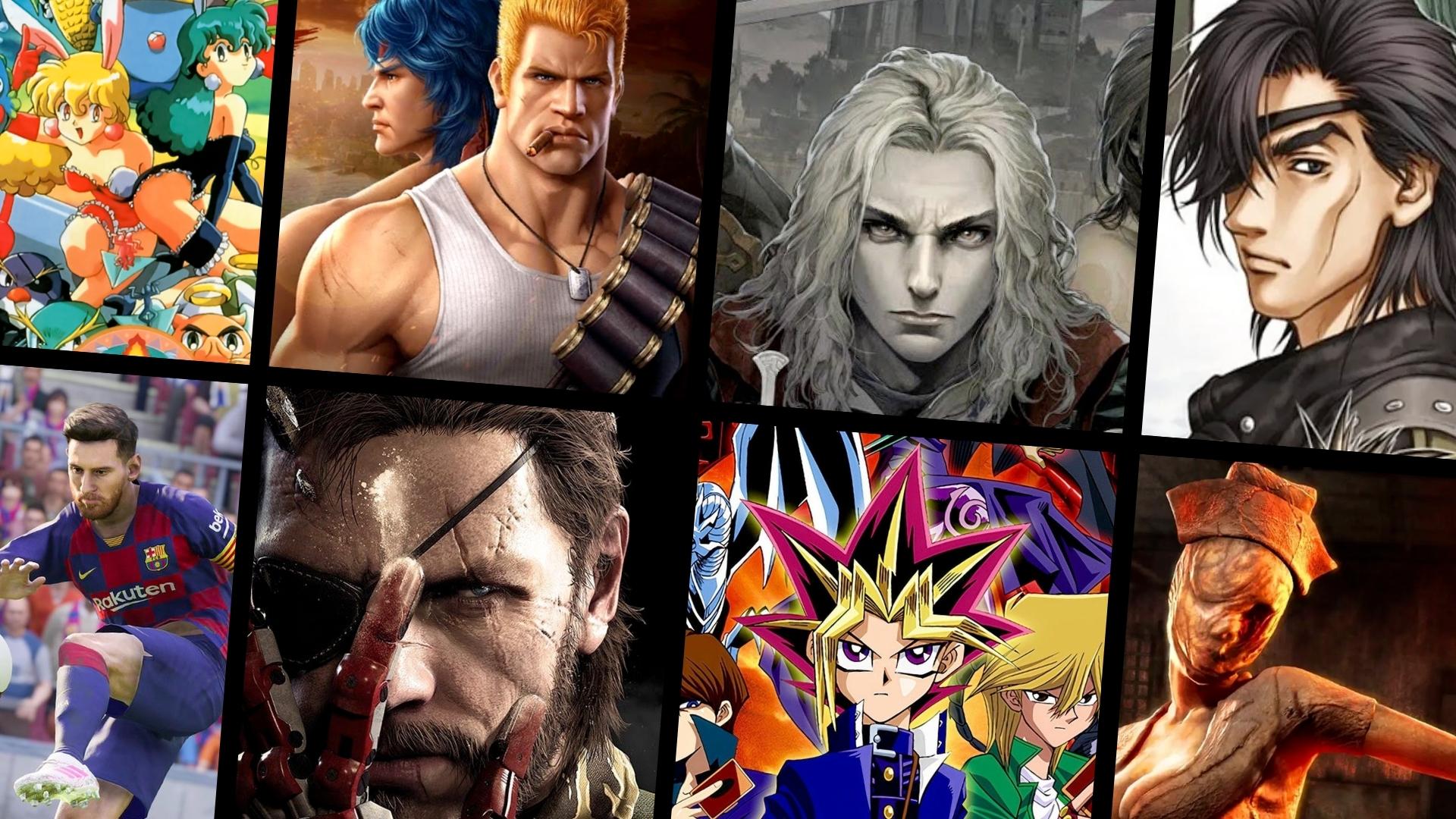 Konami’s origin story will sound familiar to people privy to Sega’s: both started as small businesses that turned their attention towards machines for video arcades, before becoming the legends we know today. In Konami’s case, it all began in 1969 when Kagemasa Kozuki transformed his jukebox rental and repair business into an amusement machine for video arcades business. In 1973, Konami was officially established as Konami Industry. The name is a portmanteau of the name of the three founding members; KOzuki (Kagemasa), NAkama (Yoshinobu), and MIyasako (Tatsuo). By 1979, Konami was exporting its products, arcade games, to the United States and finding great success in that venture. 1982 was a big year, as the company established a subsidiary in the United States and expanded into the PC game industry (followed by the NES in 1985).

From this point forward, Konami continued to make a name for itself in the video games landscape with exceptional titles in the living room (Metal Gear Solid, Castlevania, Suikoden, etc.) and arcade centers (Bemani rhythm game series). Nowadays, the company has a corporate structure with numerous ramifications and iterations and offices worldwide. The significant subsidiaries deal with sports, fitness, entertainment, casinos, and even real estate, showing the size Konami has achieved since 1969. Here are the latest Konami statistics and facts to paint this picture for us.

After 53 years in the business, Konami is still around and a big name that several generations now know. The company has its paws in multiple industries, but its first love was video games, and it is still investing quite a lot in that aspect. However, the focus has shifted quite a bit for a few years now (too much sadness in the gaming community), and Konami has shown the image of a primarily business-oriented company.

Konami’s market value has been estimated at around $7.9 billion market cap.

Surprisingly, 2021 was a far better year than 2020 for Konami. Even 2019 fared better than the latter in everything. However, there is no big mystery or boycott behind those numbers: Konami has been slowly neglecting the home video game aspect of the business. They are still releasing them, but few and far between. With such a strong focus on arcade centers, casinos, pachinko, or sports/fitness centers, it was evident that the 2020 crisis was going to affect the company so drastically. Most of those places were forced to stay closed or had to follow a strict schedule. Konami’s saving grace was the fact that it has been focusing on mobile games and microtransactions. 2021 was a healthy year with people slowly living again and 2022 is already showing quite the flying colors.

Konami has already taken measures in case of a new drastic lockdown by implementing measures that would allow their customers to use their services online. For example, online fitness classes or the release of a Konami-station to enjoy arcade games at home or on your phone.

Konami Holdings Corporation has a total number of 8,817 employees.

Konami’s four main subsidiaries also represent the four main sectors the company is involved in. It comes as quite a surprise to see that sports/fitness has the second-biggest number of employees. Few would think of “sports” when hearing the name “Konami”. But that is mainly because the sporty side of the company is mostly active in Japan. To the point that several Japanese Olympic athletes call Konami Sports home. Results for Q4 are not out yet, but we can already see that the Asia/Oceania region has seen a considerable change in how they consume Konami’s products. It might well have reached ¥10,000 million at the end of FY22.

Even though the focus has somewhat shifted when it comes to video games with Konami, the fact stands that the company has given birth to a slew of legendary titles/franchises in the gaming landscape. Not only in arcade centers, but also in our living room, and that is how it actually conquered the Western audience. Even if they are not being exploited nowadays, Konami still retains ownership of all those titles.

The Castlevania franchise has sold over 22 million units worldwide since the first game’s release.

Upon its release in 1986, Castlevania proved that Konami had what was needed to create hit after hit. It might seem trivial today, but the game really created a new way of playing for the action/adventure genre. The improvements and changes it brought are still used in terms of level design. Of course, nothing’s perfect and the franchise has the occasional bad title here and there (looking at you, N64), but nothing big enough to kill the legacy. The last original game was released in 2014 (Lord of Shadows 2), as Konami seems to only focus on ports of old titles and collections now. A shame considering the potential here, the success of the Netflix animated series (over 30 million viewers), and the still really strong community.

The Metal Gear franchise has sold a total of 58 million units since inception.

A reference in the thriller-stealth genre, Metal Gear/Metal Gear Solid was the big introduction of the talented Hideo Kojima to the world. It finally gave a name (and some strong street cred) to the stealth genre, showing that it could be done in video games. It was not the first stealth game, but he was definitely the first to succeed in flying colors to show a real appeal. Furthermore, it also demonstrated that video games could be cinematic. With a mix of particular humor, deep narrative, intricate storyline, cyberpunk, philosophy, political stakes, and rich and intuitive gameplay, MGS engraved its name in video game history forever. Unfortunately, like with a lot of its games, Konami mistreated the franchise and went so far as to bully its creator, even after he left the company. Proving that Kojima was the blood in MGS, after Konami released a new entry following his departure, the game completely bombed.

Silent Hill is still acclaimed today as one of the best survival horror franchises, if not the best. It changed the negative outlook people had on the horror genre as B movie material. The games dive into tortured psychology with a gritty environment reflecting the mental struggles of the character in a skillful manner. The first game used real-time 3D rendering and in order to mask the limitations of the PlayStation, the devs used a lot of smog, grainy textures, and badly lit surroundings, which actually added to the atmosphere of the game. The formula was golden. The last 6 main games were developed by western studios, and not by Team Silent. Regrettably, those games are severely under-tracked, and even when finding numbers for units sold for each game, those tend to be way inferior to the real statistics. Except maybe for Silent Hill: Downpour. That one deserved the terrible numbers. And let’s not even talk about the P.T. (Silent Hills) fiasco in 2014. Another neglected franchise.

Winning Eleven/Pro Evolution Soccer/eFootball has sold 112.5 million copies since the release of the first installment, in 1995.

Pro Evolution Soccer, as known internationally, is actually a franchise that was first released in 1995 in Japan under the name “Winning Eleven”, but took to the world stage in 2001-2 only. Konami then decided to change its name for a second time in 2021, renaming it eFootball. That new name also came with a new commercial strategy: eFootball 2022 is using the free-to-play business model, meaning that microtransactions are numerous. There is also a spin-off series called J-League Winning Eleven that is exclusive to Japan. eFootball is one of the most lucrative franchises owned by Konami at the moment: between the eSports championships organized by Konami since 2010 and the huge appeal the games still have (over 400 million downloads on mobile), profits keep rising. The game has been losing some steam in the West and eFootball 2022 did not help since it has been completely panned after its release: with outdated graphics, terrible handling, and bugs galore, needless to say, Konami took a hit. A life-changing patch is scheduled for April 2022.

Konami was a juggernaut. It still is but in a different manner. Whereas we all knew the company for its games, nowadays, it seems that there is no real reason to acknowledge them. Yet, they are enjoying quite good financial health. Why? Simply because the point of view in Japan and the West is drastically different.

Konami is well-known in Japan for its arcade machines, casino machines, involvement in sports (even at a professional level), real estate agencies, affiliations with television, even with Internet providers, etc. Konami is a holding corporation and amongst their numerous businesses, you will find video games. In the West, that is all Konami is known for. Thus, when the company decided to neglect their best games, the ones that opened the west to them, the audience on that side of the globe was not happy.

However, it is not just that: Konami is hopelessly motivated by a greedy thirst, and several of their decisions show that milking the players is their priority. Best believe that they have quickly jumped on the NFTs business using Castlevania. Konami is also known for its bullying nature and acts regarding its employees and ex-employees, sabotaging their chances to find a job elsewhere. From Suikoden which the company decided to let rot in a dungeon to Metal Gear Solid owes all its success to the one man they harassed without mercy, Konami lost its spunk when it comes to video games in the living room. They are still doing very well with Yu-Gi-Oh though, and they have announced that they will be focused on mobile gaming from now on…and sometimes console/PC stuff.