Take a look at the all starters from generations one to seven, and how they’ve changed over time. 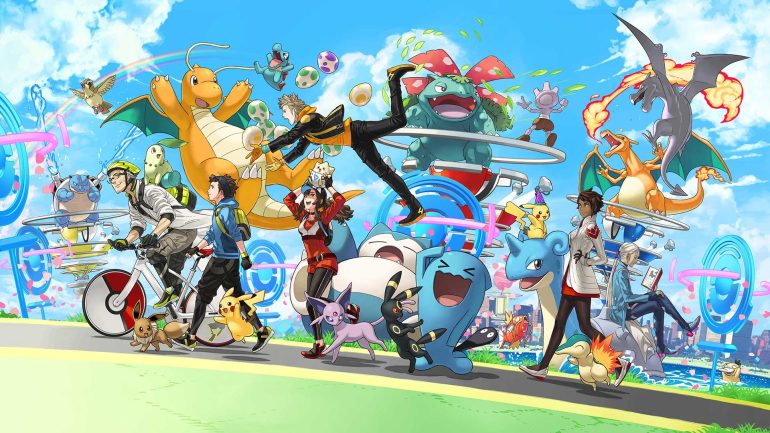 Pokemon has been enthralling gamers and squeezing their parents’ wallets for more than 24 years. Since we first popped that blue (or red) cartridge into our Gameboys in 1996, Pokemon has grown into the world’s largest media property, eclipsing Mickey Mouse and Star Wars and even beating out the saccharine pop-culture juggernaut herself, Hello Kitty, with more people playing now more than ever thanks to Pokemon GO on their phones.

In those two and some odd decades, we’ve become Pokemon masters, defeated the Elite Four countless times, and earned dozens of Gym Badges. We’ve battled our friends, traded Pokemon, and accidentally deleted a few by accident. The most dedicated among us have even caught them all.

Of course, all the badges, trophies, and exhaustive Pokedex collections would have been impossible without our loyal pocket companions. And no matter what generation kicked off your journey, it always begins with three: the starter Pokemon. So here’s a tribute to all the starter Pokemon that have been there from the very beginning.

A side note for those wondering where Professor Oak obtained Pokemon that are so rare that they’re not found in the wild, the anime offers an explanation. Apparently, starter Pokemon are bred in special ranches to be distributed to young children around the world. Ash and the gang learn this when their travels take them to a Mudkip farm in Season 6.

Bulbasaur, Charmander, and Squirtle — three iconic Pokemon that would play critical roles not just in your Pokemon story, but also in Ash’s rise to glory in the animated TV series. Only one could be yours; the starter Pokemon are not encountered in the wild. And so your adventure begins with a critical choice that will shape the arc of the rest of your playthrough (though we just picked the cutest).

Unlike some other Generations, the Gen 1 starter Pokemon are all viable throughout your entire run of Pokemon Red/Blue. Charmander struggles in the early Gyms but gets a major power boost after evolving. Squirtle dominates early Gyms and is a great rotation pick in the late game, but is outshined by other Water Pokemon before he becomes Blastoise. Bulbasaur is clearly the best of the bunch — he’s strong against a lot of Gym leaders and has a great move set that will carry you through the early game. Bulbasaur doesn’t do well against the Ice and Dragon type Pokemon that the Elite Four own.

For those of us who watched the anime before playing the games, it was a sore disappointment to learn that Pikachu wasn’t included as a starter. In Red and Blue, Pikachu could only be found in Viridian Forest or the Power Plant, and its encounter rate was terrible — a measly 5%. For a time, it seemed our dreams of recreating Ash’s saga to Pokemon Mastery would never come true.

It didn’t take long before Nintendo realized their mistake and gave us Pokemon Yellow. Now you could begin your journey with Pikachu, just like in the anime! Unlike the other Pokemon titles, you don’t choose your Pokemon starter in Yellow, you’ve only got Pikachu (though you eventually do obtain Bulbasaur, Squirtle, and Charmander in Yellow). And just like in the TV show, Pikachu refuses to be evolved into a Raichu.

It should be noted that Pikachu is a horrible starter Pokemon that struggles against most Gym Leaders. If you thought Charmander had trouble beating Brock, wait until you see Pikachu try to take him and his Rock type Pokemon on.

Generation 2 introduced dual-type Pokemon — Pokemon that had strengths and weaknesses of two different types. The dual-type system introduced great depth and variety into the combat, elevating it beyond the simple rock-paper-scissors mechanics of Gen 1.

Oddly enough, none of the three starter Pokemon in Gen 2 are dual-types. Cyndaquil is pure Fire type, Totodile is pure Water type, and Chikorita is pure Grass type. This meant they had fewer weaknesses than dual-type Pokemon, but also had less potential for growth as their single type would limit their potential move set. Chikorita in particular would earn a reputation as one of the worst starter Pokemon in the series’ history due to changes to how critical hits work.

Gen 3 had a great selection of starter Pokemon. Torchic and Mudkip have evolutions that do well from start to finish. Their power curves are very similar, so you can’t go wrong with either. Mudkip has fewer weaknesses and has slightly better stats, so he edges out Torchic. Mudkip’s also a lot stronger in Emerald, as the Champion uses Water types which is Torchic’s natural weakness.

Treecko is the only single-type Pokemon of the three starters in Generation 3. Even after evolving, he stays a pure Grass type, which limits his move set. He’s not a bad starter Pokemon by any means, but Mudkip and Torchic are so strong it’s hard to recommend Treecko over them.

Just like in Generation 3, Diamond and Pearl gave us two excellent starter Pokemon and one underpowered option. This time around, the Water starter is the runt in the litter.

Turtwig is the first great Grass starter Pokemon since Bulbasaur. Its excellent Strength growth and high Defense, Turtwig is a veritable tank that never goes down. It’s a bit slow, but makes up for it with a powerful move set that deals crazy damage.

If you were to make a list of the best Fire starter Pokemon, Chimchar would certainly be in the running. Basically the polar opposite of Turtwig, Chimchar has terrible Defense stats but makes up for it with raw Speed. As Chimchar evolves, he becomes a Fire/Fighting type — a deadly combination with few weaknesses.

Piplup starts off as a pure Water type Pokemon but eventually gains the Steel type. Its greatest weakness is, surprisingly, its speed. Though Turtwig is still slower, Piplup doesn’t have Turtwig’s rock-hard Defense stats to compensate.

Along with the new region of Unova, Black and White gave us 156 new Pokemon (the biggest Pokedex update so far), seasons, Triple and Rotation battles, as well an excellent story that touches on surprisingly mature themes. For these reasons and more, Generation 5 is widely considered the greatest generation of Pokemon games. Unfortunately, it also has some of the worst starters in the franchise.

Snivy, Tepig, and Oshawott feel almost like reskins of starters from previous generations. Snivy is a mono-type Grass Pokemon who never really takes off (as is typical of mono-types). Oshawott is, statistically, the worst Water type starter in all of Pokemon — it has low health, deals average damage, and is slow as molasses. Even Tepig, the best of the three, is boring and derivative. Tepig is a Fire/Fighting type (where have we seen that before?). Tepig is also super slow, making fights a chore.

X/Y does away with a series tradition — your starter Pokemon isn’t given to you by a Professor, but from your neighbors.

Chespin, a Grass type Pokemon that eventually evolves into a Grass/Fighting combo, is a physical damage sponge. It has excellent Defense, great Attack, and high HP. It’s a great rotational pick for taking on Pokemon that deal a lot of physical damage, but Chespin is at a disadvantage against special attacks. Chespin and all of its evolutions are also incredibly slow, so prepare to take a few hits at the start.

Fennekin is a Fire type that becomes a Fire/Psychic type. Its strengths are Special Attack and Speed — like Chimchar, Fennekin wants to make the first move and end fights quickly. Fennekin also has high natural Special Defense, but doesn’t do well against physical damage.

Froakie is the clear favorite of this generation. While Fennekin is a fast fighter, Froakie is built for Speed. Its move set combined with its above average Attack makes Froakie a glass cannon — it hits hard but can’t take punishment.

10 best competitive Pokemon in Sword and Shield to play

Although Speed is often considered the most important stat in Pokemon, the real reason Froakie is considered the best starter of Gen 6 is its Hidden Ability, Protean. Protean changes Froakie’s type to the type of whatever move it casts. With the right move set, you can absolutely obliterate your opposition, no matter what their type.

Pokemon’s 7th generation introduced new Pokemon that divided the fanbase. Entire articles have been written on why Sun/Moon has the ugliest Pokemon. Meanwhile, Pokemon user forums are full of players arguing about why Gen 7 looks terrible (or is the greatest generation of all).

No matter which camp you’re on, I think we can all agree that the starters in Sun/Moon are bland. They’re basically regular animals.

Rowlet is a Grass/Flying type Pokemon with great stats across the board. It does well early in the game against the Water and Grass type Pokemon. Once it evolves into Decidueye, it can even learn Ghost moves.

If you look at Litten’s poor base stats and tepid growth makes it a poor choice of starter Pokemon. For a long time, Litten was considered a bad Pokemon, due solely to its inability to single-handedly carry battles. It would find redemption on the competitive circuit, where its evolved form, Incinerorar, would become one of the most popular Pokemon for three years in a row. This is thanks to its excellent supporting abilities, cementing its place as one of the greatest Doubles partners around.

Popplio doesn’t start well, but as it evolves it eventually becomes the starter Pokemon with the highest Special Defense and Special Attack. It has a great move set that leverages all of its strengths; an arsenal of Water type attacks that can send your opponent packing. However, its low Speed, poor Defense, and largely useless Hidden Ability (Liquid Voice) makes it viable in only special situations.

At last, we’ve arrived now at the latest generation. Sword and Shield are the biggest Pokemon games yet, introducing a slew of awesome features and an incredible new region inspired by the UK. It also modernized Pokemon for a whole new generation and brought a true single-player Pokemon experience to home consoles for the first time.

Grookey is the Grass type equivalent of Chimchar — fast and powerful. In fact, Grookey has the highest Attack stat of any starter Pokemon. It also benefits from the Hidden Ability Grassy Surge, which restores 1/16 of Grookey’s Max HP every turn. Grookey shines in a utility role thanks to moves like Drum Beating, which makes opponents slower.

Scorbunny is one of the fastest starter Pokemon around with a power curve and evolution line similar to Froakie. Despite its strong Attack stat, Scorbunny and its evolutions have a limited physical attack pool. With the hidden ability, Libero (essentially Protean Mk. II), which turns all of Scorbunny’s attacks into STAB attacks, the Pokemon really comes into its own.

Sobble starts with the second best Speed and Special Attack of any starter Pokemon. Unfortunately, its shallow move set and mono typing puts a cap on its usefulness quite early on. Its STAB attacks are excellent, but limited to Water type moves. Even its Hidden Ability, Sniper, can’t save Sobble — it increases the effect of critical hits but only works for Snipe Shot.

What’s next for Pokemon starters?

That covers the 25 starter Pokemon from all the mainline titles of Pokemon. We’ve watched the series transform from an 8-bit, colorless handheld exclusive to an expansive 3D tour de force. Sword and Shield lets us experience the world of Pokemon the way we imagined it staring at our Gameboys twenty four years ago. We can’t wait to see what the series has in store for us next!