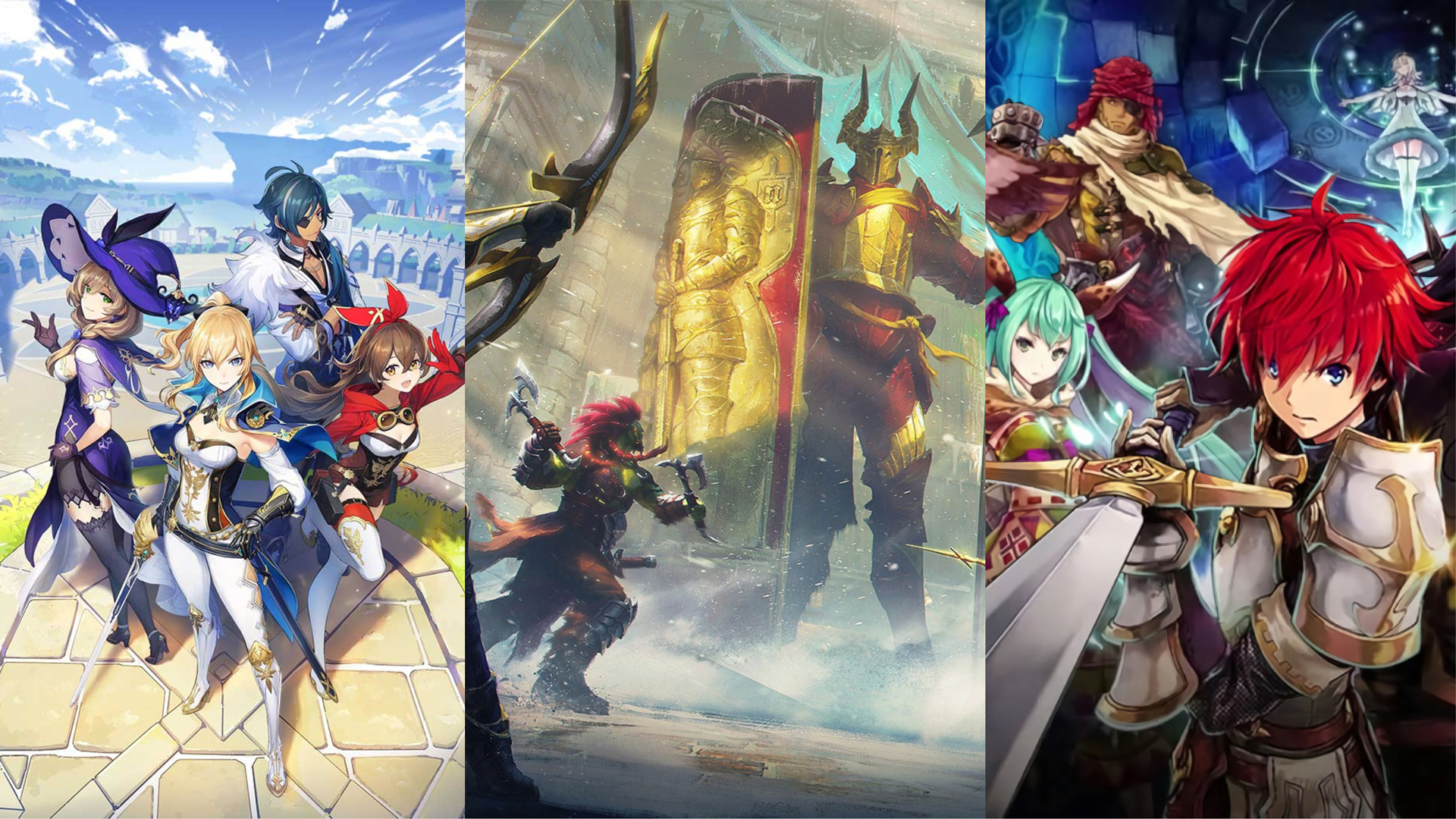 These are the best gacha games on both iOS and Android.

Whether you’re curious about the genre and don’t know where to begin, or you’re a gacha fan looking for a new adventure, we’ve got you covered. Here’s a list of the best gacha games available today.

Gacha games are the super-popular game genre inspired by the capsule dispensers of old. The premise is simple: spend some currency and get the chance to win a cool toy to show off to your friends at school the next day. While the original gacha games were essentially roulettes rolls for (potentially) cool toys, modern gacha games show the genre has evolved. The biggest and best gacha games are video games first — they offer deep systems, great stories, and memorable characters to reel players in. Once you’re immersed in their virtual worlds, the gacha mechanics are there to keep you glued to your screen.

This is one of the most popular gacha games we have today. Raid: Shadow Legends focuses on the idea of collecting champions in order to have them fight for you on the battlefield and to have them take castles and strongholds utilizing siege tactics. What makes this a gacha game is the fact that you have a certain amount of energy which is expended upon completing an action such as raiding or fighting. To replenish your energy, you need to wait for it to recharge, purchase refills from the in-game store, or use promo codes to get multiple bonuses. This might seem like a tedious matter for many players, but the rich storyline followed by the brilliant gameplay makes up for having to wait a bit. If you’re someone who likes PvP then Raid: Shadow Legends can accommodate you as well through the well-made multiplayer arena.

Genshin Impact is an Action RPG with light gacha elements. Its incredible graphics and insane production quality made waves when it was first announced way back in June of 2019. Now that it’s out, gamers are showing it lots of love.

Genshin Impact boasts free-exploration mechanics inspired by Zelda: Breath of the Wild with a combat system that imitates the elemental rock-paper-scissors of the Tales series. Explore the beautiful fantasy land of Teyvat, scale massive cliffs, swim through vast bodies of water, and glide from mountain to mountain without ever having to reload the overworld. Plus there are codes to help you out.

Beauty comes at a cost, though — you’ll need a pretty beefy smartphone if you want to run Genshin Impact with all its bells and whistles.

With a total production cost of over $100 million, Genshin Impact’s scope and vision rival that of major games by established AAA publishers. In less than two weeks, it had made that money back and more. Could this be the beginning of big-money productions finally gaining a foothold in the mobile games market?

The Alchemist Code sports a Google Play Editors’ Choice Badge on its Play Store page. This turn-based strategy title employs a combat system that should be familiar to fans of classic SJRPGs, like Final Fantasy Tactics. Characters take turns moving on a grid and you must use your tactical skills to think of ways to flank, defend from, and attack your foes. The Alchemist Code has 50 characters you can collect, 4-player co-op mode, and competitive PvP. Players love this game for its full, fleshed-out campaign and great characters.

The gameplay in Dragalia Lost, a gacha RPG published by Nintendo, is a lot more engaging than the turn-based auto-battlers that are common in the gacha genre. You take direct control of your characters, maneuvering them from above in a third-person perspective as they navigate obstacles and go to battle. The monetization systems are light and unintrusive. Success in the game is more skill-based — you don’t need incredible gacha luck or a fat wad of cash to do well in Dragalia Lost.

Everyone knows what Dragon Ball is, but did you know about the Dragon Ball gacha RPG for mobile devices? This game is not a fighting game like the other games in the series, but an RPG with a simple battle system. What’s unique is the ability to traverse through a 3D environment by swiping the screen. The controls are easy to handle: swipe around to move, flick to the side for dodging, tap the screen to attack, etc. Dragon Ball Legends has quite a variety of game modes to keep you busy, such as the Missions/Adventure, Story Mode, and PvP mode.

The Fate series is famous for its vast cast of characters. The game has a very engaging story and soundtrack. The story follows the original fate series storyline. The gameplay allows you to summon a wide variety of characters, engage in special events, and a friendly free-to-play scheme.

This Final Fantasy entry brings the old and new into one. Dissidia Final Fantasy Opera Omnia (quite a long name) features +120 legendary heroes from throughout the Final Fantasy series, starting from original Final Fantasy to Final Fantasy Type-0. Fans of classic, turn-based JRPG mechanics will feel right at home in this nostalgia-inducing homage to some of our favorite RPGs from childhood.

Azur Lane is based on the famous Kantai Collection game in Japan. A unique feature in Azur Lane is the shoot-em-up (shmup) mechanic. However, most of the time, you will be auto-battling enemy encounters. There are more than 300 characters you can unlock, special events to take part in, and a lot of mechanics found in other gacha games. The UI may seem a bit cluttered, and the English translation is a bit wonky, but the interesting gameplay and super-cute characters make it all worth it.

Brave Frontier has more than 700,000 positive reviews in Google Play Store. Many consider this the best gacha game downloadable now. Although the game plays like most gacha games, the collecting and F2P aspects are what keeps people coming back to Brave Frontier. You can collect more than 200 characters through summons, and the free-to-play aspect is friendly enough to bring in more players.

Exos Heroes brings special features into the gacha world. One of the noticeable features is the 3D graphics. The polished and flawless graphics show how much love the artists put into the game. Another useful feature is the AFK leveling system that allows your characters to gain new items and loot while you’re not actively playing. You can also change your characters’ gender and appearance.

If you are an anime lover, you know what One Piece is. Join Luffy and a cast of famous characters from the iconic One Piece manga series as you duke it out for treasure and glory in various online arenas. This team-based brawler features 4-on-4 multiplayer combat, capture the flag style game mode, and a host of awesome characters and classes to battle with.

Another Final Fantasy title in this list is Final Fantasy Brave Exvius. Due to its friendly free-to-play mechanic, you can go through the story without any boundaries, unlock all of the heroes, join in on special events, and many more. The combat in this game is turn-based like the older titles in the Final Fantasy franchise. The game has unique features, such a:

Arknights is a special gacha game that’s a hybrid of the original gacha RPG and a strategy RPG. Plenty of the mechanics are similar. You can go through the campaign mode, timed events, and unlock hundreds of different characters to summon into your team. The fighting is quite different from other gacha games where it’s less JRPG and more like an SRPG. The key aspects of this game are:

Nintendo did an outstanding job infusing the turn-based, tactical action of a classic series like Fire Emblem with gacha elements. There are quite a lot of things to do in this game, such as:

In a genre dominated by anime-inspired titles, MARVEL Strike Force brings western comics into the gacha fold. Get ready for a lot of grinding and to spend a bit of cash if you want to unlock everything. That hasn’t stopped hundreds of thousands of players from enjoying this game on a daily basis.

Lord of Heroes has an excellent storyline, great characters, and some of the best visuals you’ll find in a free-to-play gacha game. The turn-based battles, hero collection, and training mechanics constitute your standard gacha game fare, but they’re executed with a rare polish. You can get pretty far without spending a dime, which is great news for free-to-play gamers looking for a casual auto-battler to jump into every now and then.