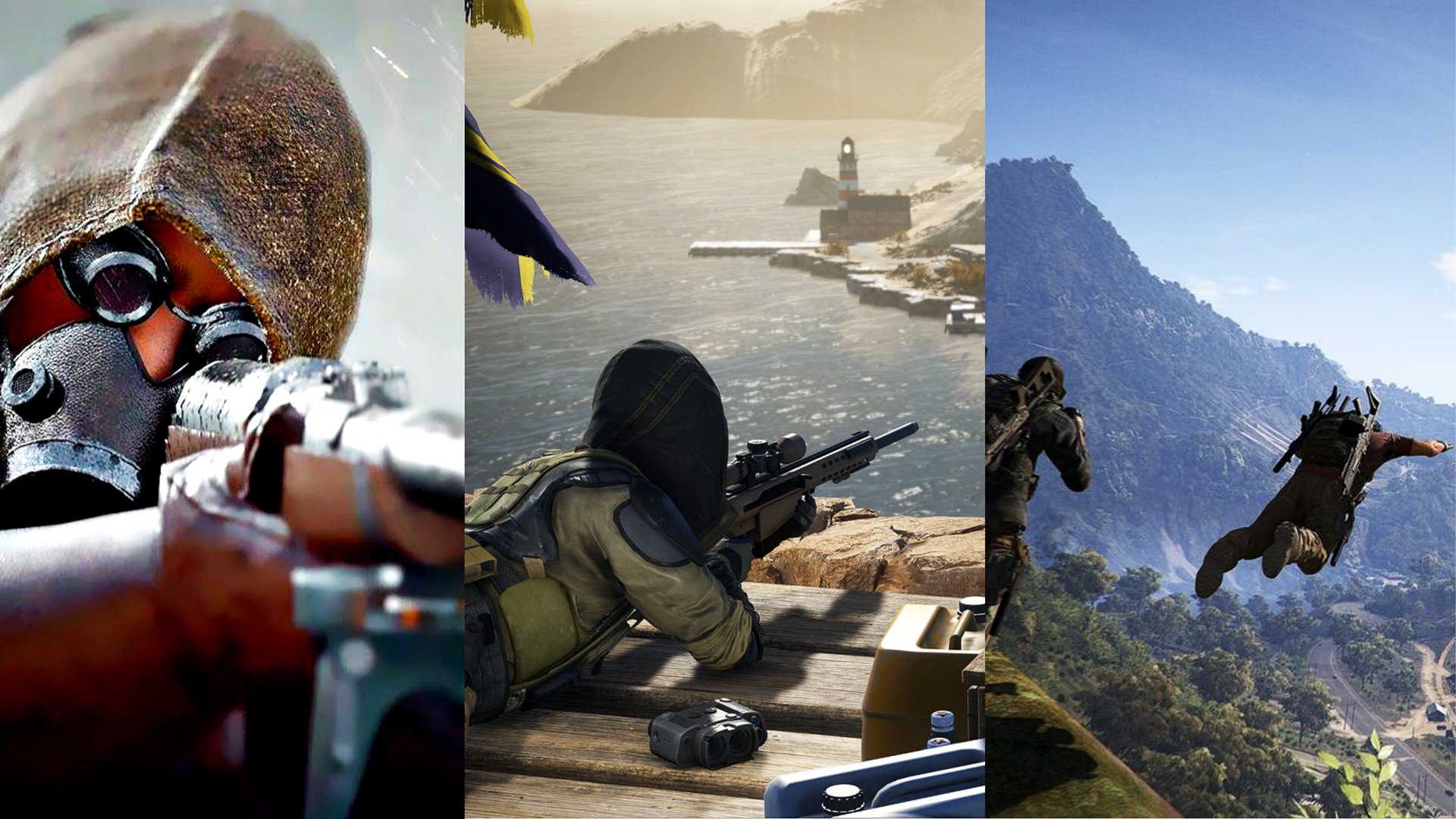 Take aim and execute your targets in these intuitive sniper games!

There are two types of online shooter players — those who prefer a gun and gun approach, being in the heat of the action all the time, shooting enemies down with heavy assault rifles, and those that prefer the calm approach, stealing away into nests and looking for enemies to dispatch with a single, well-placed shot. Sniper games take the latter playstyle and bring it to perfection.

Because these games are wonderful representations of a calm and collected playstyle, we have decided to create this list of the best sniper games, so you can find one that suits you and enjoy it for hours.

If you’re the type of player that wants to enjoy a little bit of everything when it comes to combat, then you should check out some of our other articles such as best war games and best tank games. These cover a wide variety of war topics and offer a lot of content, with some of them even being free!

Sniper Elite 4 is the fourth installment of the iconic Sniper Elite series and features excellent combat where you complete missions with varying objectives. This installment has made a name for itself as one of the best sniper games around. The campaign is rich with a variety of missions, so each one will feel like a new experience. Something that this game also has is an x-ray mechanic, where long-distance shots will initiate a cinematic kill sequence. This will show your bullet flying through the air and entering the enemy and destroying bones and vital organs, just like it would in real life. Some mechanics have been improved, such as the ability to tag enemies to know where they are, as well as the office mechanic where if you kill the commander, his forces will fall back. If you enjoy playing these games with friends, you can do that as well through multiplayer mode.

Aha! A mobile game! Sometimes you might not have the time to play these games via your PC or console, but you can always turn to your mobile device if you want something to play on the train or while you’re waiting for someone. The premise of this game is that you play as Agent 47 as he embarks on a mission to assassinate some people in Montenegro. Many levels need to be completed, and each one requires you to tactically assess the situation to see how you can kill the target without alerting everyone. You don’t have to do anything when it comes to movement or confrontation, all you have to do is look through the scope and shoot. However, no matter the fact that you can’t move, you can still fail the mission if you’re noticed, so care should be taken. It’s difficult to talk about the best sniper games and not mention the Hitman series.

Battlefield games are always remarked as some of the best sniper games due to their interesting combat dynamic where the focus lies in teamwork and outmaneuvering your opponent. While the campaign is amazing because of the World War 1 setting, most of the hype lies around multiplayer mode, where players join lobbies and select their class. One of the classes you can select, Scout focuses exclusively on bolt-action rifles and snipers to execute enemies from a large distance. There are 10 gamemodes in Battlefield 1, each of which has an extremely different dynamic compared to the others, so they offer a wide variety of experiences for sniper players who want to experience different things. If you want a gritty game that thrusts you into the heart of the horror of WW1, then this is the ideal game for you!

Tom Clancy’s Ghost Recon Wildlands is a game where stealth takes precedence over everything else, and where you play with a battalion of U.S. soldiers who need to complete various missions across a rich open world. You can utilize weapons commonly seen in the U.S. army and around the rest of the world, but you can also use the plethora of vehicles just lying around the wildlands. There is a lot to uncover in this game seeing you have the open world, but also a wide variety of missions and control points that give you access to different parts of the map. You’ll quickly see why this is one of the best sniper games. Such a large map is best enjoyed when you add other people into the mix, and for that, you have the co-op multiplayer mode that allows you and your group to tackle the missions together, as a team.

The predecessor of Sniper Elite 4, Sniper Elite 3 places you in North Africa at the height of World War II. The landscape is brilliant, with vibrant tones strewn throughout. Your job is to complete missions and assassinate key members of the Axis forces, as well as normal footsoldiers. Your primary means of dispatching enemies is your sniper rifle, which adheres to the laws of physics much like in real life, where you have to account for many factors such as wind speed, drop points, and more. Besides the rifle, you also have access to other types of equipment ranging from sidearms to bombs. You can progress through the ranks of the game by accumulating points through stealth kills. The most satisfying thing about Sniper Elite 3 is the x-ray system where you can see the damage of your bullets in real-time. As you can see, a game that is solely focused on snipers is bound to be one of the best sniper games.

Moving on, we have a game that focuses on the gritty, slow combat of World War II where the battles are done on a large scale, with over 100 players participating at the same time. Hell Let Loose features some of the most iconic battles of World War II, most focusing on the Western Front, where cooperation is the key to success. You have access to some incredibly well-made maps where you have multiple ways of assailing the enemy team. Want to engage in an all-out firefight where strategy is thrown out the window? Of course. Or do you prefer to lie in wait, supporting your allies with choice shots at out-of-place enemies? You can do that, too. The freedom to choose your approach is one of the best things about the best sniper games. There is a lot of things to do in Hell Let Loose, and it’s your job to approach the battle and seize glory!

Sniper Fury is a small game that does not have that much recognition in the gaming community, but it can still be considered one of the best sniper games. The game is set in the near future where methods of enhancing soldiers have been perfected. When it comes to the gameplay, you can expect the same tropes and themes that other sniper games have — being stealthy and executing your targets with perfect precision. A benefit of this game is that you also have access to futuristic tools that help you get some insight into the situation to see what the best course of action is.

This game is the sequel to Sniper Ghost Warrior 3 and features some interesting changes compared to its predecessor. Primarily, the gameplay revolves around completing missions where your goal is to execute individuals to complete your contracts. There are 25 missions you can solve, with each one giving you money upon successful completion. Money can be used to upgrade your attributes through the provided skill trees, where you can improve certain aspects of combat to help you complete the contracts more efficiently. Overall, it is one of the best sniper games that offers a lot of content and hours of sniper gameplay.

Let’s face it, when you want to enjoy a game that has a little bit of everything, you can’t go wrong with Arma 3. This game is a sandbox-type game that has a campaign included, and the central focus lies in realism and completing missions that have some solid reflection to real life. If you want to, you can run through the whole game with just a sniper rifle and you would notice the difference. Now, when it comes to Arma 3, it really shines in the community modding section. With over 90,000 active mods at the moment, you’re basically guaranteed to find something that fits your playstyle and needs, including something that caters to players looking for the best sniper games. This is why everyone who’s a fan of war games should check out Arma 3.

This game is all about large-scale warfare done between multiple squads on a massive map. Each squad can have up to 9 players and one squad leader who can communicate with other squad leaders via the communication network. Each squad member is able to select their class, which ranges between the most common combat tropes in war games. The attention each class gets, especially the scout, makes this one of the best sniper games available. You can choose to be a medic, support, assault, or a scout, which is our focus at the moment. Because of the good communication system, you can station your snipers to have an overlook on the situation and snipe key targets while others engage them properly. Squad is a wonderful game that any war game fan would love.

There you go, that’s all we have for you regarding the best sniper games. As you can see, they range in complexity from simple mission games to full-scale warfare games where the goal is to survive. If you’ve found this informative and interesting, consider checking out some of our other articles like best gacha games and best mobile multiplayer games!