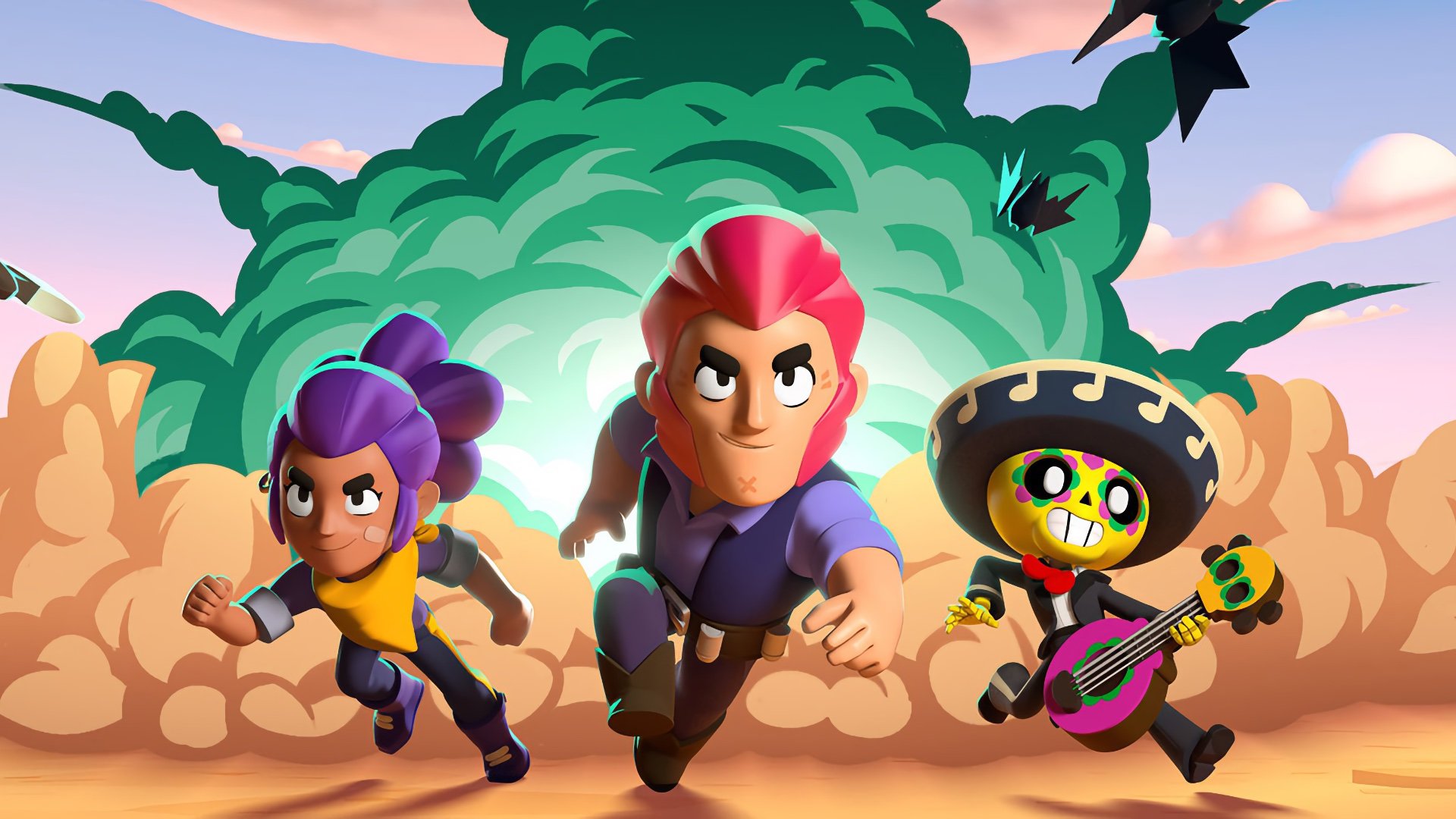 Brawl Stars is Supercell’s (of Clash of Clans/Clash Royale fame) surprising take on MOBA games, with a twist in the shape of hero shooter elements. The game was released globally in 2018, but it was already on soft launch since 2017 and lasted for 522 days.

In Brawl Stars, players get to choose between 50 different Brawlers, each with their specific set of skills, strengths, and weaknesses. The game is a simplified version of MOBA games as we know them, while keeping the core elements intact. It also incorporates the hero shooter genre in its gameplay and some aspects of the battle royale genre. Matches are played in an arena using a 3v3 PvP format and the goal is usually to score higher than your enemies by killing other Brawlers. Brawl Stars features over 10 different modes that will protect a city from big monsters to holding onto your gems until the end of the countdown. There is even one dedicated to soccer! The game also has a competitive ranking system called Power League, allowing players to gain Star Points at the end of each season (2 months). Finally, the Club League is a weekly competition held between Clubs on specific days of the week.

Here are the latest Brawl Stars statistics and facts on how the game is performing. After this, if you still crave some more facts and figures, then check out our piece about video games industry statistics for some shocking insights.

The Brawlers take up arms, weapons, and gadgets to ensure their victory in a frenzied match that will require more than just luck. Players will tell you themselves: in Brawl Stars, you need good mechanical skills and a good game sense. Those are necessary to be able to predict your opponent’s movements, but also to assist you in aiming while moving. Whether solo or in 3v3, the game keeps them on their toes.

After leaving its soft launch phase, Brawl Stars went on to enjoy a high and fast rate of downloads. After almost a year in beta, word had quite spread about the game and all the changes it experienced made people curious as to what the final version would look like. Even if Supercell had to deal with a new genre, they clearly gave the players what they wanted. Then again, the studio released a game that was open to everyone and really took the mobile community into consideration. If Supercell can generate huge numbers from a spin-off of an existing game (Clash Royale with Clash of Clans), there is no way they would not score with a new, unique concept.

Over 10 million players pre-registered before the game was officially released globally.

Supercell’s games are always eagerly expected, as the studio is well known for polishing its products. Brawl Stars is no exception and its long period in beta state only served to inflate that expectation. Not only did it bring an astounding number of pre-registrations, but it also generated a lot of money, considering the fact that the game was not actually ready for consumption, based on Supercell’s standards.

Brawl Stars has generated a total of $1.4 billion since its launch in 2017.

The prolific studio Supercell is back with another success with Brawl Stars. Even if it is an overly simplified MOBA borrowing several codes, Brawl Stars is a hybrid that found its audience. The game is Supercell’s fifth title surpassing the $1 billion threshold. Profit is solely generated through a freemium business model, meaning that the game is free, and can be enjoyed without spending a cent, but for those willing to do so, it is possible to indulge in in-app purchases. In Brawl Star’s case, those include the premium version of the battle pass and gems (the hard currency) that allows you to buy loot boxes and Gold (the soft currency). The monetization in Brawl Stars depends on the player’s motivation, making it less aggressive than Clash Royale, another Supercell’s successful title.

250 million maps have been created by players via the Map Maker.

The scale of Brawl Stars is, simply put, huge. The constant updates and the really great communication between Supercell and their fans are, of course, part of that secret recipe for success. They even hold a ceremony tailored just for the players, The Brawlies, awarding some of them with special prizes. Talk about recognition! Their YouTube is always scoring new views, never falling into a negative number, and it can even brag about the fact that the biggest Finnish channel is for a mobile game. Their number of players is pretty steady: through forums and comments, we can see that it is easy for players to find people to play with and there is a constant stream of activities to indulge in. That would also explain the millions of players always on time for the big monthly event. Unfortunately, Supercell is not in the habit of sharing exact numbers for MAU and DAU.

Brawl Stars was nominated for Mobile Game and EE Mobile Game of the Year at the 2019 BAFTA Game Awards.

The title did not win the BAFTA, but it is quite the feat to be nominated. Obviously, with such a success, it received the highest distinction in its country, Finland. In general, Supercell is a source of pride for its representation of the Finnish mobile gaming industry on the global scene.

Time to take a closer look at how the community consumes the game. Brawl Stars has a tight bond with its player base. They are pretty accessible on several social media platforms (Twitter being the most active), but also on Twitch and YouTube. It makes it easier for devs to gauge the feedback and for players to share their worries or compliments. There is always something in the oven for the Brawlers!

Brawlers can be randomly obtained in the different loot boxes and therefore, your roster does not always look the way you wanted at the beginning. Collecting Brawlers and leveling them up is one of the pleasures players enjoy. Even if they are at the top spot, we can see that Lola and Grom are particularly appreciated by players.

The best team in Brawl Stars is composed of Grom, Grom… and Grom, as this trio won 3,900 matches.

Here are the most used teams for the most popular mode in the game: the 3v3 ranked matches. Each player controls a different Brawler, which means that there is a need for balance, but also strategy and good communication between team members. Even if the top combo lacks the diversity of the other teams in that list! But, Grom seems to be a fantastic character, as he also placed second in Best Star Powers.

On iOS South Korea, Brawl Stars places #1 on iPhone and #2 on iPad in Top-Grossing Casual Games.

Those three countries were not chosen randomly: they are the countries you will always see in the top 3 of the biggest spenders in the community. Since the beginning, South Korea and Japan have shown quite a loyalty towards the game, with South Korea always making sure to be first. The US is quite involved too, but it is clear that Japan replaced it as the second country, a place it used to occupy.

The contrast is quite big when compared to iOS. Except for South Korea, that just stays content in how it loves the game, platforms are damned. An interesting fact that might explain this phenomenon is the fact that the game has been heavily downloaded on Apple devices in these three countries, which is the complete opposite of what happened with Android. However, countries like Russia and Brazil have been more active on Android. In Russia’s case, the number of downloads is as good on iOS, though.

It all started in a restaurant/bar where the devs held a mini-tournament between a lucky few. It was nothing big, but it captivated everyone, even the waiters. That is when they understood that Brawl Stars had the potential for eSports. And why not? The game is fast, clean, and provides a smooth user experience and an uninterrupted play with constant progress. It is not the biggest circuit out there, but it is one worth looking into.

The biggest prize pool in a tournament reached a total of $1 million.

Brawl Stars is still new on the eSports scene but had a fairly wonderful start in the industry. The game was made for that with its gameplay, potential for entertainment, and the need to work in a team. Those make rather compelling elements when taking into account an audience. It adds another stone to the altar of mobile games making for good eSports, and the professional scene is thriving steadily.

Japan dominates the top 5 players with the highest earnings.

SkYRiiKZZ from Austria and CoupDeAce from Singapore break the Japanese supremacy in the list, which shows a lot of diversity afterward. The Japanese players are all part of ZETA DIVISION, a local eSports organization with teams in other tournaments such as Valorant, PUBG or even Wild Rift. Fun fact: the two eSports teams attached to the PSG and the AC Milan also field in Brawl Stars.

The Japanese ZETA DIVISION team has the highest earnings at $633K.

We already talked about ZETA DIVISION and the eSports team affiliated with the PSG soccer team. INTZ is Brazilian and fields teams in mostly big licenses, Brawl Stars being the smallest tournaments they take part in. SK Gaming, one of the biggest eSports organizations and the biggest in Europe, is pretty well known with its international roster (SkYRiiKZZ is actually part of it). Tribe Gaming is North American and competes only in mobile gaming tournaments. It was created by a gamer/influencer with huge faith in what mobile gaming could do (and he was not wrong).

Brawl Stars is another smashing success coming from the productive Finnish studio Supercell, and one they did not see coming. It certainly cements the fact the studio is a reference in mobile gaming and that they know how it works and what kind of audience they should target. Creating a MOBA game for mobile devices is no easy task. Not when the master of the genre itself, League of Legends, decides to also throw itself in the competition.  But its simplified system, mixing up to three different genres, did the trick: Supercell mastered its equation.

The game attracts a wide and diversified audience: from teenagers aged 13 to 17 to mature adults well settled in their finances or even seniors of 50+ years of age. Brawl Stars is a community where being 30 years old will not mean that you are a boomer. Plus, the community is actually non-problematic. But we rarely saw Supercell’s communities being a problem. The game is still pretty young and has, obviously, several good years waiting to happen. It will also most certainly help to establish the important space mobile gaming is now occupying in the video game industry.