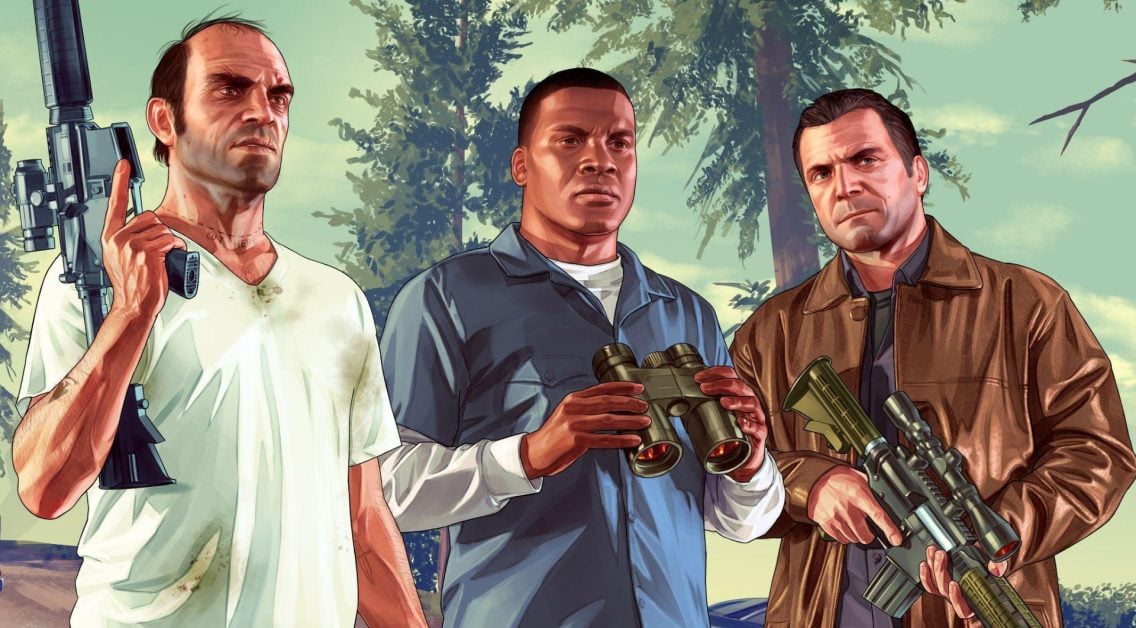 Grand Theft Auto V is an action-adventure game set in the open world of San Andreas, its countryside, and the city of Los Santos. The game was developed and published by Rockstar. It is the seventh entry of the main GTA saga, not including expansion packs or handheld games.

For the first time in a GTA game, the player is introduced to three different protagonists: Michael de Santa, Franklin Clinton, and Trevor Phillips, three criminals (retired, for Michael) who will end up trapped between the biggest players in the underworld, the US government and the dirty side of the entertainment industry. Pulling heist after heist, each more dangerous than the other, our three compadres live on the edge in the ruthless Los Santos, trusting no one but themselves. GTA V is the pinnacle of everything GTA, really: the world is bigger, there are even more activities to do, numerous easter eggs or collectibles to find, more vehicles, more weapons, fantastic protagonists, amazing voice acting… There is no end to it. In good GTA fashion, players are often left to their own devices, roaming freely and interacting with people and businesses. The scenarios advancing the stories are the most linear quests in the game.

Grand Theft Auto Online, the online multiplayer coming with GTA V, is the wet dream of all fans finally coming to fruition. Set in the same world as the main game, the game puts you in control of your customized character, searching for fame and glory in the criminal world. You will then have to partake in different quests that reward you with items, experience, and money. Up to 30 concurrent players are allowed, and the game proposes different sets of activities and modes that will keep you and your friend busy for a while.

Time to dive headfirst into the underbelly of Los Santos with these GTA V statistics and facts! Plus, if you want to learn some video games industry statistics then click on the link to learn some great new information.

GTA V features a proper multiplayer with more options than what we saw with other attempts at multiplayer with Rockstar for that particular franchise and even the possibilities of future updates. GTA aficionados were in utter bliss. The appeal of roaming freely in Los Santos and San Andreas, wreaking havoc with your friends, and taking the GTA special touch to a whole other level has been on the mind of the community for ages now.

1. The age group 18-34 is the most predominant one playing Grand Theft Auto V.

The poll has been conducted by the same user on those two platforms. We can easily see that GTA Forums is preferred by adults, which are also the biggest crowd in the game. Since the first GTA was released in 1998, Rockstar never hid that the series was created with adults in mind. The game clearly trusts its audience to know when the game starts and ends. With its more than mature themes, the rating has never been an issue within the community, full of working adults; some of them (if not most of them) even grew up alongside the franchise. However, a lot of criticism has been hurled at the games (for every release), labeling it as one of the causes behind modern violence in children/teenagers. Never mind the fact that parents are the ones buying the game and that the age rating is right there, slapped on the front cover, or in full display on the page when buying on Steam.

GTA V had to deal with millions of players right after its release quickly. Not only in terms of the individual for the single-story mode but also for its multiplayer. Sure, it was coming for free with your game, but not everyone is interested in playing online. So, we can infer that a lot of those sales first came from players wanting to play the main campaign, which must be the case because, in the beginning, the multiplayer was just plain terrible and impossible to play. Then Rockstar started fixing it and adding content, and since it was around the time it went on Steam and crossed to the next-gen of consoles, not only people who could not buy the first batch, but people who upgraded their consoles would then buy a new copy since they wanted to continue playing online. Covering generation after generation of consoles is pretty smart!

GTA V has been a global success since its release in 2013. Eight years later, it is clear that Rockstar and their favorite are not done yet. The game is still selling units left and right. The online component is racking in huge amounts of money thanks to the different microtransactions available (upgrades, accessories, clothes, in-game currencies, etc.). Plus, the title has now been on two different generations of consoles and is getting ready for the PS5 and Xbox Series X/S in March 2022. The longevity of the game, financially and game-wise is simply astounding.

From 2013 to 2021, the game has been selling at least 10 million units each year, amounting to 20+ million for some of them. 2020 has been the only year when the game was not featured among the games with the highest sales. Only in 2020, because in terms of lifetime, Grand Theft Auto V is the second best-selling game, right after Tetris. And because it will be released next year on PS5 and Xbox Series X/S, the online mode will be standalone if you so desire, that Playstation started a campaign rewarding people who intend to buy it with 1,000,000 of the in-game currency each month until the game is released and that both the main campaign and the multiplayer will have new exclusive content and enhancements, yeah, we are not done seeing that total rising higher.

5. GTA V has received over 50 awards and accolades.

Of course, those are mostly the most notable since they are connected to the video game industry and arts in general. It is essential to acknowledge those awards, too as they contribute to showing the world that video games are way more than just “pixelated games used to pass the time.” Nowadays, many of them are movies of their own merit with fantastic voice acting, graphics, directing, story, soundtrack, etc. That is also why most of those live adaptations coming from Hollywood mostly fail: players already have a movie they can even interact with. Is there a need for a watered-down version of it?

Time to take a closer look at how the community consumes the game. It might be GTA, but there is still some order to it. The multiplayer mode suffered a lot of hiccups during its inception, but Rockstar worked really hard to fix those and continuously provide content to enhance the players’ experience in-game.

6. The United States is the country with the highest rate of daily participation at 11.06%.

We can understand why the United States is first: as many players have said before, they recognize their country or specific cities that have served as models. Of course, there is also the fact that the game is awesome, but that is always a plus.

I hope you are into cars, planes, and whatnots because GTA V/GTA Online is a haven for tuners and vehicle connoisseurs. Gathering them and showing them off is a past-time a lot of players indulge in. The numerous updates and events focused on giving some love to your vehicles are always around the corner. Signs of wealth, do not even have to be efficient for people to drool over them.

8. The most powerful weapon, the Remote Sniper, can exclusively be used in GTA V during a specific mission but boasts a score of 73.20% in efficiency.

Know your guns, that is really all one can say. It is GTA after all. And remember that in this game (like in Saints Row), size does not always mean that you have a powerful beast in your hands. The only issue is that, most often than not, you will find a smartass online who decided to mod/hack their weapons to be able to obliterate everyone for no reason at all.

The game is still a wild success on Twitch after eight years on the market, mostly thanks to its online mode. The main story is excellent, but the reason behind such longevity is that online, you will find new content pretty often. Plus, the game’s setting is perfect for role-playing, something that is really popular with the community. Viewers going on Twitch to watch many people living their own life in Los Santos is not a rare sight.

Signs that the title was most expected on Steam, it set all its records during its release month. In general, the game makes great numbers, but none as successfully as the legendary April 2015. The game is played for an average of 1.5 million hours to 2.5 million hours each month. Meaning that the player base is pretty loyal and engaged, and that, even if the game is plagued with hackers killing people indiscriminately. And that is only for Steam, so imagine the numbers on other platforms…

Considering the nature of the game, it is understandable why it cannot be translated into eSports. However, GTA V is not empty (far from it) and the community has taken it upon itself to organize small events/tournaments for the player base. They are nothing too crazy, but they are legit, prizes can be won (not always though) and they are a lot of excellent fun!

11. On game.tv, 63 community-hosted tournaments have already been organized.

Considering that players can craft their own and that Rockstar actually has added different gameplay modes in GTA Online, it is a bit bizarre that the company is not organizing tournaments in-game. Sure, they have all those side-missions and achievements, but tournaments are a whole different ballpark. Websites like game.tv are beneficial since they help the community organize itself properly. And the prizes are proper: vouchers for Amazon or Steam, prize money in in-game currency, expensive items from the game, etc. Some hosts also look for participants on forums like Reddit.

People were hoping for something new about GTA VI after the Game Award, but because Rockstar intends to release the game on PS5 and Xbox Series, that will not happen for a while. Plus, as said before, those versions will come with a good number of perks bringing even more players. Rockstar has even neglected the main campaign in favor of the online mode, keeping it updated and always active 24/7. The main campaign received no DLC at all: we usually get a new scenario that way, but this time, nada!

However, it is not like it will be easy for Rockstar; fans already complained about the quality of the trailer they have released showcasing the game on new-gen consoles, so they have some work waiting for them until March 2022. Maybe by then, Rockstar will also think about organizing some tournaments on a bigger scale as right now, players play on maps they have created (which is still a big thing). All in all, there is not much to reproach to GTA V/GTA Online: Rockstar pretty much knows its stuff. Except with remastered versions: please, do better than the GTA Trilogy.