How to get Fury in World of Tanks — explained 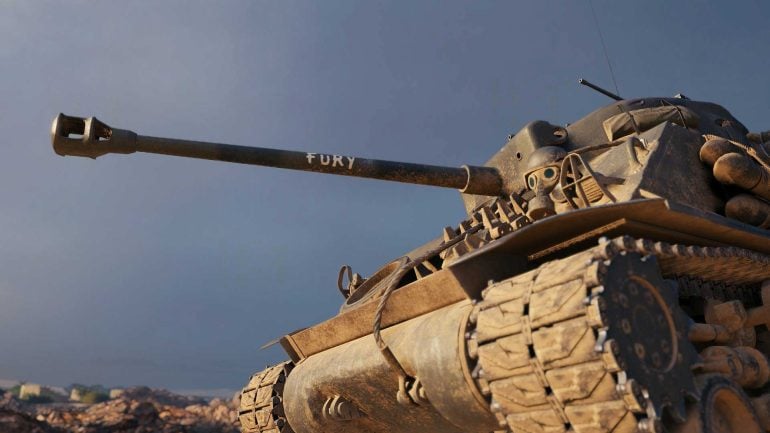 Fury was a legendary M4A3E8 that first caught the public’s eye as the centerpiece in the 2014 Brad Pitt film of the same name. Known for the wooden logs strapped to its sides and the word “Fury” etched into its barrel, this souped-up Sherman Tank has a bigger engine and harder-hitting cannon than the original model.

Fury was first added to World of Tanks the same year the Hollywood film hit but was later removed and made into a collector’s piece. It’s gone back to market a few times since, though never for very long, making it one of the most coveted premium tanks in the game.

This guide will go over what makes the M4A3E8 Fury such a great tank in World of Tanks, including how it stacks up to the OG Sherman Tank. We’ll also cover how and when you can get a M4A3E8 Fury of your very own, as well as where to find information about its availability in World of Tanks.

But before we dive in, you’ll want to make sure you’ve got enough Gold in the bank. Use these WoT gold codes for an injection of WoT’s premium currency.

How to get the Fury Sherman Tank in WoT

Sergeant Wardaddy’s iconic tank, made famous in the movie Fury, was first made available from October to December 2014. The M4A3E8 could be purchased with a 20% promo discount for $69.99. It was subsequently taken off the market, making it a rare collector’s item. Fury has been added back into the store a number of times since then, but only for short periods.

There doesn’t seem to be any rhyme or reason behind when Wargaming decides to sell Fury in the shop. Recently, you could buy it in March of 2021, but that was only for two days.

Since Fury is a premium tank, it can only be obtained by buying it from the in-game shop. It’s usually sold as part of a bundle, so you get some Gold, special 100% crew, loads of Credits, and an XP boost, too.

You can get the latest information about Fury’s availability from the official Wargaming Twitter account or the official World of Tanks website. If you play the game regularly, you can’t miss the promo images plastered inside the actual game client whenever Fury becomes available.

The official in-game description for Fury boasts a bigger cannon and a more powerful engine under the hood. What it doesn’t mention are the unique Fury turrets, upgraded radio, and improved suspension. Here’s a quick rundown of how Fury’s modules stack up against a stock Sherman Tank’s:

As you can see, the Fury has higher-tier modules across the board. Keep in mind that the original M4A3E8 can also be outfitted with upgraded modules; some of which may be better than the Fury’s (on paper, at least).

Here are the two tanks base stats, side by side. Figures with an underline are the winners in the comparison:

As you can see, the Fury is tougher and generally more mobile than the stock Sherman. While the Sherman is lighter and has a higher max speed, it’s subject to higher terrain resistance, which makes it tougher to navigate in all terrain types.

How to join a platoon in World of Tanks

The Fury also hits harder and faster than the stock Sherman, thanks to the premium tank’s quicker reload times, higher rate of fire, and faster traverse speeds (for both turret and tank).

Overall, the Fury is better than the M4A3E8 Sherman Tank, though, frankly, not by much. Just looking at stats alone, the Fury is one of the better Tier VI tanks in the game, though it’s pricier and harder to find than other premium tanks in its tier. If you’re looking for a Tier-VI tank with similar performance, consider the Cromwell B or T-34-85M. Both aren’t quite as good as the Fury, but there are aspects where they outshine it. More importantly, you can get either tank right now.

And that just about covers everything you need to know about how to get Fury in World of Tanks. As our stats rundown has shown, it’s definitely a tank worth saving up for if you want to lay down the hurt in Tier VI. You may be in for a long wait, though, so keep your eyes on official developer channels for the latest news.

Who doesn’t like talking a warzone from inside the metal chassis of a roving war machine? Find more awesome tank games with our guide to the best tank games to play in 2023.

Got friends on all platforms? Get the gang together with our list of the best cross–platform games to play in 2023.