Which version of World of Tanks should you play? Here we go over all the differences between WoT and WoT Blitz, so you can decide for yourself. 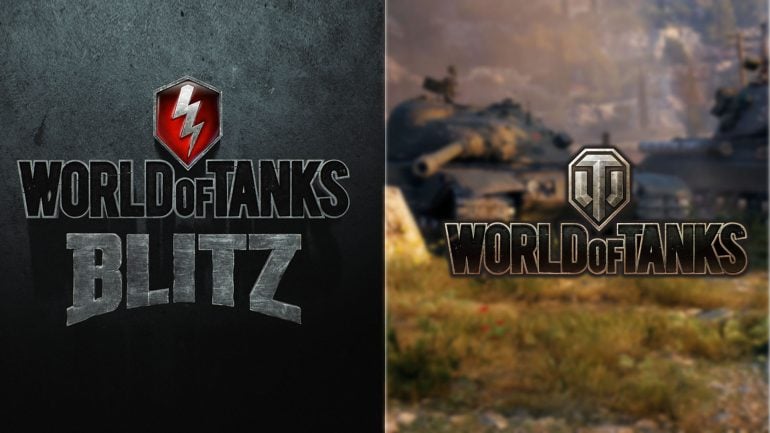 At first glance, both games look the same—you get into a war machine and blow tanks up—but there are some important differences between them. Below, we’ll talk about the biggest differences, including map size, tank selection, and more.

If you want to compete with the very best in World of Tanks, take any advantage you can get. Grab free loot, rewards, and bonuses to boost your WoT career with these free World of Tanks Wargaming codes!

World of Tanks Blitz is sometimes called the “pocket version” of World of Tanks. Designed from the ground up for phones and tablets, Blitz is an impressive remake that brings much of the original’s depth to gamers on touchscreens. Still, it’s not a one-to-one conversion—some changes were necessary to make it suitable for a mobile audience.

The first difference is map size. Maps in World of Tanks Blitz are much smaller than in the PC version. Yes, Blitz only supports 7-on-7 battles compared to the original’s 15-on-15 matches, but the smaller map size makes for more crowded and dense battles. The developers say a round of Blitz has about twice the tank density of the PC version, so you shoot more and spend less time looking for fights.

The smaller map size also contributes to the next big difference between WoT and Blitz:

World of Tanks’ ongoing appeal is because it balances simulator with arcade gameplay. World of Tanks Blitz is more arcade-like than the PC version; tanks are more responsive and simpler to maneuver.

Smaller map sizes help with speed. In World of Tanks PC, it may take a minute to reach a fighting zone. In Blitz, you can spawn and start fighting within seconds. There’s little down time between deaths.

Wargaming also adjusted the turn rates of tanks in Blitz to fit the game’s tighter combat zones. This makes evading shells and moving in and out of cover easier than in the PC edition.

Shooting is simpler in World of Tanks Blitz

Shooting in World of Tanks isn’t as simple as pointing and firing. There are lots of things to consider before committing to a shot, like shell dispersion, weapon accuracy, aim time, ballistic trajectory, shell velocity, and reload time. Sim game fans love this complexity, but it can be a lot if you just want a simple deathmatch.

Combat is mostly unchanged except for one big thing: bullet drop is removed in World of Tanks Blitz. This means your shots will more reliably land where you want them, which makes combat in Blitz way more accessible without sacrificing much depth.

World of Tanks Blitz has fewer tank models and types

With more than 300 vehicles and counting, the tank selection in Blitz is nothing to sneeze at. However, World of Tanks PC doesn’t just have more vehicles (600 and growing); it also has a larger variety of vehicle variants.

The larger tank selection makes for more varied matches in World of Tanks PC compared to its mobile counterpart. You’re guaranteed to run into a tank you’ve never seen before at least once a week. Having more vehicle types allows for greater vehicle diversity in all tiers.

World of Tanks Blitz does not have artillery

Artillery is the World of Tanks equivalent of snipers. Artillery class machines can deal massive damage from halfway across the map, making them the most-hated vehicle class in the game.

World of Tanks Blitz does not have the artillery class—the maps are just too small for them. To some veterans, this alone makes Blitz the superior game.

Longtime World of Tanks fans often recommend Blitz to newcomers based on two factors. The first is no artillery in Blitz. The other is the streamlined crew management.

In the World of Tanks games, you assign crew members to any tanks you want to deploy in battle. In the PC version, there are thousands of unique crew members to choose from, each with their own backstory and stats. Each member levels up with experience earned from battle, unlocking crucial special skills only after you’ve spent dozens of hours grinding to max them out.

In World of Tanks Blitz, crew management is as simple as spending some Gold or Silver to level up the crew’s effectiveness. Simple and easy to understand.

We’ve talked about all the major distinctions between World of Tanks and its mobile version, World of Tanks Blitz. Many assume that because Blitz is for mobile that it must be a shallow imitation of its PC brother. We hope that this article has shown you that isn’t the case. Blitz may be the more arcade-y of the two, but it’s still a deeply nuanced and challenging experience that sim fans are sure to enjoy.

Looking for other awesome tank games like World of Tanks? Read up on the very best best tank games, right here. And for more awesome games that explore warfare from different perspectives, see our guide to the best war games.