Looking to improve your combat skills in Minecraft? Here are some of the best Minecraft PvP tips! 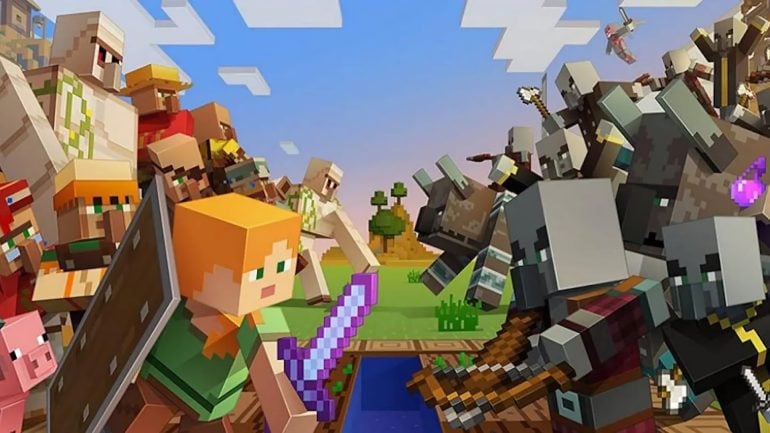 Most of the time, when people choose to play Minecraft, they spend a lot of time in survival/creative mode, just enjoying the game and practicing their building skills. However, that is just half of the game, the other being PvP, or player versus player. In multiplayer, you have awesome servers where you can fight other players to be the winner on themed maps, which is quite fun.

Being good at PvP is something that takes a long time to achieve since it all boils down to practice and skirmishing, which is the only way to learn. So, to help you improve your PvP skills, we’ve prepared this list of the best Minecraft PvP tips to take your game to the next level!

While multiplayer is a fantastic side of the game, some people might not like it and choose to play the game on their own. If you’re one of these people, we recommend you take a look at the best Minecraft room ideas as well as the best Minecraft mob farms, if you need something new to build.

One loose arrow can mean the difference between winning a fight against someone else and giving them an opportunity to shoot back and kill you. If your aim is bad, you’re going to have a tough time taking advantage of the distance between you and the enemy player, thus increasing your risk of death once they get closer. Check if your server has a dedicated area for aiming practice, and if not, just practice is a creative world.

Every server has different rules when it comes to enchantments, but if you’re able to choose your enchantments and prepare before a fight, make sure that you choose the best of the best. This will notably increase your chances of winning because certain enchantments work really well in PvP, such as Knockback and Sharpness.

We’ve mentioned aiming as the first entry for the best Minecraft PvP tips, and while that does help you considerably, you also have to keep in mind that enemy players will more than likely be using the same strategies against you. Because of this, you need to practice evasion tactics such as strafing and jumping so any arrows that could have potentially hit you, miss. The only way to master this is to just practice in any server.

Imagine you’ve been fighting for a few minutes, both of you are low on health, and you need to swap to a potion to heal yourself, only for you to press the wrong button, get confused, and eventually killed. This is why it’s important to establish some muscle memory and good hotkeys for your items so you never fumble a win. We recommend you use a mouse with macro keys on the side so you don’t have to engage your left hand on other keys as much.

One simple but underrated skill you’re going to need in PvP is very fast clicking. Clicking quickly and faster than your opponent is a great way of securing wins in many areas. Like all the other Minecraft PvP tips we’ve mentioned, this is another skill that needs to be constantly practiced. It is also recommended that you get a good gaming mouse so it doesn’t die too soon.

Using just a sword is not going to get you too far in Minecraft PvP, and that’s something you’ll see once you start playing regularly. Utilizing axes, potions, bows, fishing rods, and much more is going to make sure that you’re ready for any situation. Be sure to practice with many different weapons on your server and get used to quickly switching between them with hotkeys.

Whenever you hit someone in PvP while you’re standing on the ground, you’re going to deal the same amount of damage no matter what. However, when you jump and hit someone while you’re in the air, you can get a critical hit that deals a lot more damage than normal hits. Getting multiple crits is a great way of dealing more damage to your enemy than they do to you, so it’s one of the best Minecraft PvP tips to master!

This PvP tip is a bit niche since it takes a lot of coordination to execute properly, but if you have a fishing rod in your pocket for specific situations, you can massively outplay your enemy and beat them into the ground. Using a fishing rod, you can snatch your enemy and pull them in different directions to disorient them and get the upper hand.

Believe it or not, sprinting is another useful mechanic to take advantage of because you can very quickly catch up to enemies that are trying to switch weapons or use potions. You have to be careful with it though, because you can just as easily run into a charged or critical attack, making your plan backfire.

And finally, the final Minecraft PvP tip we have for you is to practice. That’s the best thing you can do since there are no shortcuts to getting better. Just get on your server whenever you get the chance to and start some fights, you have nothing to lose. After a few weeks of consistent practice, you’ll surely see some improvements.

That’s all we have to say about the best Minecraft PvP tips! These are very simple, yet fundamental aspects of both PvP and Minecraft in general so you might as well get used to them so you can get some wins! We also recommend you take a look at some of the best naval games, best tank games, and best war games if you’re looking for a break from Minecraft.