Just got to the Nether and want to build a place to live? Check out the best Minecraft Nether bases! 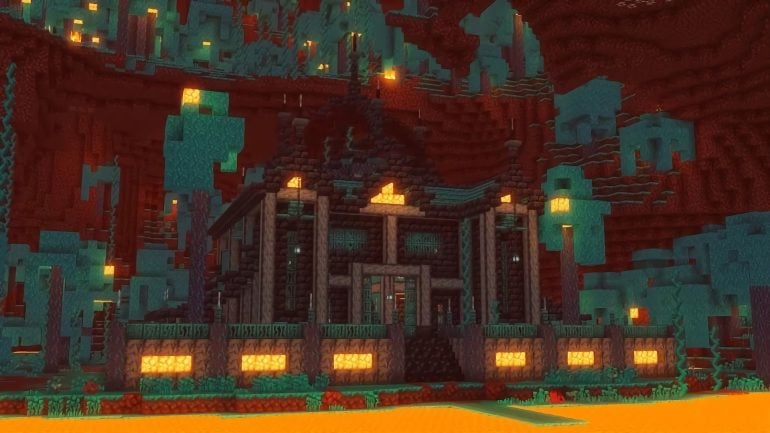 The Nether has recently been given a massive update that has considerably improved the overall experience of exploring it. It has gotten to the point where the Nether is actually a very essential part of Minecraft since there is a lot more for you to do. One of the things you might be thinking about doing is establishing a Nether base.

To help you move along with that, we’ve prepared this list of the best Minecraft Nether bases that are extremely innovative and fun to build. Most of them are relatively simple, not requiring more effort than a mansion to build, while others are gargantuan, for the bold.

The very first design we have for you is one of the biggest projects you can undertake in the Nether. This base requires over 2.5 thousand blocks to fully complete, ranging in type so there are some nice color variations. It’s a highly functional base, providing you with enough room to store anything and do anything you want. You can completely customize the interior to suit your tastes, something we look for in the best Minecraft Nether bases!

This small Nether base by Spudetti is sure to appeal to all of you who love simple, small bases. This base, in particular, is meant to be built on the “coasts” of the Nether, on the surface of the lava. While this does sound scary, it’s not too bad since all you have to do is be careful and you’ll be fine, nothing in your base is flammable anyway. The general atmosphere of this base is very cozy and warm (of course), and you can feel like you’re safe down there especially if you build it somewhere where there are no hostile mobs!

This is one of the best Minecraft Nether bases because it takes the classic concept of a nice forest cottage and applies it to the Nether. The Nether now has forests and greenery inside it, which means that you can also find trees there and use them to build your base. This base is a twist of a classic forest house that is functional while looking very good as well. The inside of the house looks beautiful and you can customize it as you wish!

No one ever said that Nether bases need to be medieval and old-school. If you’re the type that likes to take on modern builds, then this one is for you! This base features contrasting colors that really stand out in the fiery reaches of the Nether, which is a welcome sight once you’re there for a long time. It’s one of the best Minecraft Nether bases because it’s a very unique idea that doesn’t sound like it should work in the Nether, but it does!

The next base we have for you is perfect if you’re a fan of castles and want to bring that aesthetic to the Nether. This castle is large, foreboding, and looks absolutely spectacular. It features sloping roofs and grand towers that really make it stand out in the Nether, especially since it has some light colors to it. The inside is free for you to design as you wish, you can keep the inside the same as the outside aesthetic, or you can put your own spin on it. The best Minecraft Nether bases have a lot of free-form thought to them!

This base is for those of you who have just started your Nether adventure and don’t want to dedicate too much time to building a large base. This base is designed to be built into the side of a wall and capped off with glass so you can see everything outside. The inside can be expanded as much or as little as you want, and that is the beauty of the best Minecraft Nether bases!

Castle On The Lava

This one is very similar to one of the other entries we’ve mentioned, but instead of a cozy cottage, this is a smaller castle that can easily accommodate everything you might have, on top of looking awesome! The design is quite simple and reminiscent of classic castles so you can expect that it won’t take too long to build. We highly recommend this build if you’re looking for something unique.

We would like to preface this by saying that this is definitely one of the best Minecraft Nether bases, but you shouldn’t try to build it. Not alone, at least. This is a massive build that can easily take you months to build normally, so we suggest you get a few friends together on a server and then try to tackle it. The fortress is massive and features its own railway infrastructure, but you can bet that it’s a fun build!

This one is very simple, yet can still be counted among the best Minecraft Nether bases because it is ideal for new players who are still trying to get used to playing in the Nether. The entire build is like a normal house in the overworld, so you can be sure that it’s going to be a quick build! We recommend this for all new players who do not want to dedicate too much to building.

The starter base we’ve already mentioned is a hole in the wall, but if you want to stick to this building dynamic, then this cave base is ideal for you! It’s designed to be infinitely expanded according to your needs, and that’s exactly what you expect not only from cave bases but also from the best Minecraft Nether bases. This one has a lot of character to it so you can feel like a real dwarf in your hidey-hole.

That’s all we have to say about the best Minecraft Nether bases! As you can see, these bases are awesome and there are enough building dynamics that work for everyone, so we’re sure you’re going to find something that fits. If you ever want to take a break from Minecraft, we recommend you take a look at the best WW2 games, best free PC games, and the best tank games!