Check out some of the best Minecraft pixel art ideas! 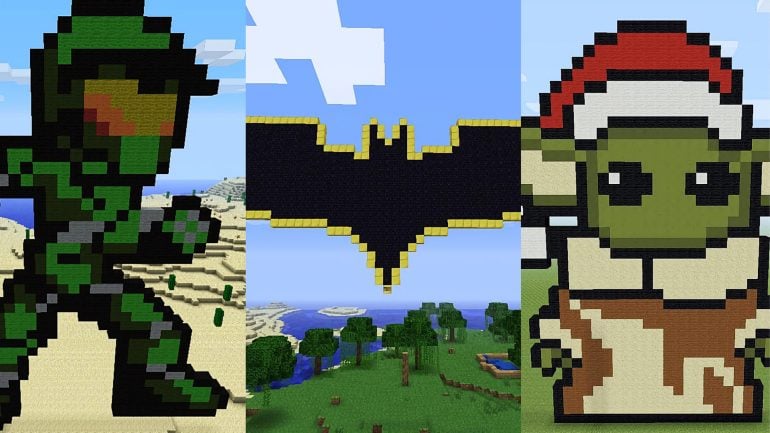 While the way Minecraft is designed tends to lean more toward the simple side, there is no denying that the fundamentals of Minecraft can make some fantastic art, when you apply it to a larger scale. Many pixel artists have devoted hundreds of hours to designing excellent art so anyone can use it and decorate their world as they wish.

To help you choose a new project to take on, we have prepared this list of the best Minecraft pixel art ideas. They range from simple designs that do not take too much time to very complex ideas based on some of the most prominent pop-culture icons around.

Playing Minecraft doesn’t always have to focus on the creative aspects of it. You can take some alternative approaches to play the game by checking out modpacks, house ideas, and much more. For some excellent mods, check out the best Minecraft modpacks. For some unique worlds to conquer, take a look at the best Minecraft 1.17 seeds!

Starting out, we have a relatively simple Minecraft pixel art idea that is just the shape of the Batman symbol, or a batarang, Batman’s signature weapon. The design is simplistic with a straightforward outline of a bat, and it’s great to have if you have some superhero projects to fulfill. If you’re someone who has just started getting into pixel art, this design is a great way of understanding scale and symmetry.

8-bit video game characters are a very popular pixel art concept because they are very easy to execute. This is largely due to the general look of them, with all of the pixels neatly organized so you can literally copy it exactly as it is with ease. If you have a building project in creative mode, Super Mario would be an excellent addition!

We’ve had DC, now we move on to Marvel. In recent years, we’ve had some excellent movies with some of the best antagonists ever. Among these is Thanos, a tyrannic supervillain that wants to collect the six Infinity Stones in order to manipulate the universe as he wishes. Without spoiling anything for those of you who haven’t seen the recent Avengers movies, the Infinity Stones go into a large gauntlet to harness their power. This pixel art design represents all of that power and is amazing as a general build in creative mode.

Back to simple Minecraft pixel art ideas, we now have a humble heart. Hearts are a massive part of contemporary imagery and are used to represent love and other emotions, and is an excellent addition to any love-themed projects you might have. It is also a great design if you combine it with other designs that share a similar theme.

Now we have one of the most badass characters in video game history – Master Chief. Master Chief is the protagonist of the massively popular Halo series. The Halo series is a Sci-Fi FPS series that has very intense gameplay and a fantastic story, which is incredibly satisfying, especially if you play all the games in order. For fans of Halo, as well as gaming in general, this design is amazing!

This cute little rat thing is one of the most popular Pokemon in the video game/anime series of the same name. This design captures the nature of Pikachu and his fiery demeanor, about to blast something with lightning. There is a decent amount of complexity to this build so it’s a neat little project if you’re trying to get more experience in pixel art.

When The Mandalorian came out, the incredibly cute young version of Yoda from the Star Wars series captivated many hearts of fans worldwide. The little critter is 50 years old despite his looks, but this doesn’t stop him from curiously cooing over everything he sees and generally acting like a baby. This design has a lot of details to it, so it’s a considerable undertaking for anyone, no matter your skill level. Still, it’s one of the best Minecraft pixel art ideas for anyone who wants to add some Sci-Fi elements to their world.

Among Us has become a cultural staple since its release in 2018, with millions of players worldwide losing their minds arguing about who did what on the ship. Because of its massive popularity, thousands of different creative ideas have been created, and this pixel art idea is one of them. The outline of the crew member is simple, so there’s not too much complexity to it.

Now we have a second entry regarding Super Mario. Yoshi is another one of the characters from the series that is incredibly cute and cuddly. The little turtle dude isn’t too complex but not too simple either, so anyone can try out this design for their creative mode world. Super Mario characters usually make for the best Minecraft pixel art ideas since their classic versions are already presented in an 8-bit form, so it’s ideal for new players.

From one of the most creative and the most offensive shows ever, we now have Eric. Cartman is easily one of the evilest characters in fiction, with a crime list miles long. If you’re a fan of South Park and want to decorate your world with its colorful characters, feel free to use this design!

And there you have it! Some of the best Minecraft pixel art ideas around. They are quite creative and there is a nice balance of complexity and simplicity so there’s a proper idea for players of all skill levels. Check out some of our other articles like best naval games, best tank games, and best horse games!