Looking for that perfect medieval texture pack for your Minecraft world? Here are some of the best ones! 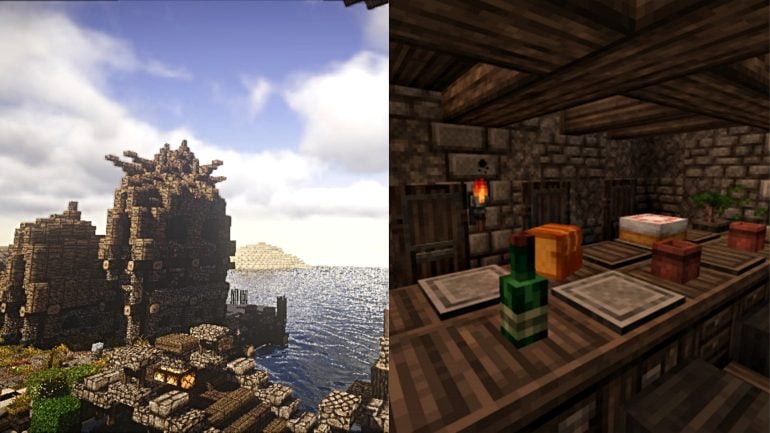 Texture packs, more commonly referred to as resource packs, are a great way of completely transforming the way Minecraft looks and giving it a fresh appearance. There are many different themes of texture packs that range from futuristic to ancient, and there are even some medieval ones!

That’s exactly what we’re going to be talking about today. The best Minecraft medieval texture packs provide your game with an old, rustic look that is very appealing if you’re running some adventure or fantasy maps.

Whether you choose to run the vanilla look of Minecraft or beef it up with texture packs, you’re going to want some new builds to take on. We have just the thing for that. Check out some of the best Minecraft mansion ideas, and the best Minecraft village ideas.

Excalibur is a texture pack that is the epitome of rustic, medieval flair. The textures are exactly what you expect them to be for a medieval pack while remaining up-to-date and competitive with all other texture packs in the same genre. The colors are a bit darker than usual, but that only adds to the atmosphere and ambiance. While there are a ton of new details in this texture pack, they are not too overwhelming and you can enjoy it while it still feels like you’re playing Minecraft!

This is one of the newer medieval texture packs out there, but it has already made a name for itself due to its sheer quality and uniqueness. One of the main things you’re going to notice about this pack is that all of the blocks in the base game have had their textures updated to look more realistic while simultaneously giving them more depth. The foliage in the trees finally has a bit of life to it, and that’s the most important part of the pack, aside from the epic visuals!

The two previous entries we’ve mentioned so far have been fairly gritty and dark, and Wolfhound Heavenly is here to break the mold! This pack has a good bit of vibrance and color to it, appealing to the whimsical side of fantasy and the medieval setting. All of the textures in the base version of Minecraft have been changed with completely new textures, which is evident once you start playing with it. If you have to run some cool adventure maps, this pack is for you!

Moving on, we have another fantastic texture pack that is awesome for general medieval builds and whatnot. The textures are quite simple and have a lot of body to them, while still including a good deal of detail. Something we also like about this texture pack is the way the animals have been changed as well, making them look more robust and rustic, just like they should be in medieval times. Overall, the realism and grittiness of this pack are awesome and you should totally try it!

Where Wolfhound Heavenly is a very lighthearted and vibrant pack, Wolfhound goes in the opposite direction and makes the textures of the world look more gritty and darker. However, just because this pack is darker than its whimsical counterpart, that doesn’t mean that it won’t fit in the same settings as other packs of the same nature. If you are looking for a fantastic pack that works in any medieval/fantasy/adventure setting, this one is ideal!

Simplicity is the name of the game in this texture pack. It’s not a complete texture overhaul compared to other texture packs we have mentioned. Instead, it focuses on the subtle features of Minecraft and changing them up just enough so you notice the changes. The textures in general are very sleek and satisfying and take away some of the clunkiness of the base game. Fantastic pack!

This wonderful pack is great for players that are looking for a different look to Minecraft while remaining faithful to the base version of the game. It doesn’t try to change the look of the game completely, instead focusing on improving subtle features of the game like lighting, details, particles, etc.

Erivale is a pack that has a more drastic impact on the game than other packs here, and that is because all of the textures are dense with particles and imaging so it looks more filled up and satisfying. It’s an awesome texture pack for anyone looking to put a medieval flair on their world. We highly recommend this texture pack because it has a set goal and strives to achieve it as well as possible.

DokuCraft is a pack that really capitalizes on the medieval aesthetic and idea that the Dark Ages were a time when monsters would roam the lands, looking for people to eat. The visuals are a bit darker and have a dulled hue to them, making the world look more dreary and rustic, ideal for medieval packs, in our opinion. The textures in this pack are quite different from the base version of Minecraft but the resource utilization is not as intense, allowing for low-spec builds to run it without issues.

And finally, we have one of the best Minecraft texture packs that are great for any medieval villages you might build in the future. The textures are very sleek and interesting making for some fabulous-looking buildings. One of the most noticeable aspects of this pack is the animals that have some of the most good-looking appearances of all texture packs. Overall, it’s a wonderful pack if you’re looking to make your world beautiful and unique.

And there you have it! Some of the best medieval texture packs in Minecraft! These are awesome for any players looking to take their world to the next level. If you’re looking for a break from Minecraft, we highly recommend you take a look at the best naval games, best tank games, and the best WW2 games!