Looking to challenge yourself with a new complex build? Take a look at some of these cool Minecraft village ideas! 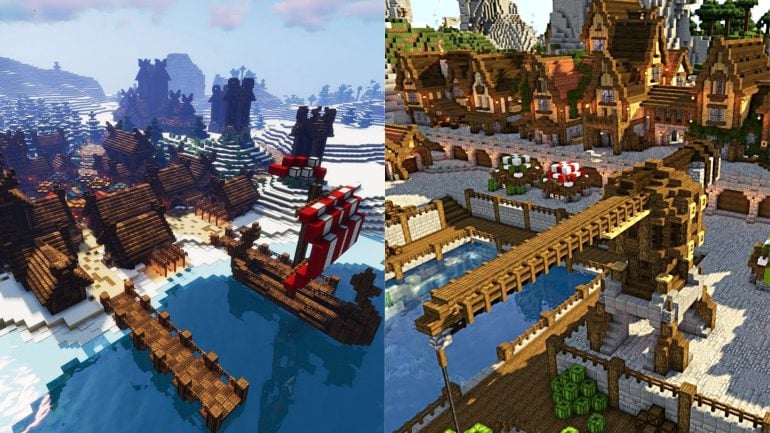 Building a base in Minecraft is one thing, but dedicating much more effort to creating your own village is another. Take the idea of the naturally-occurring villages you can usually find in the game and you will more than likely find some inspiration for building your own village.

As you have probably assumed by now, we are going to be talking about the best Minecraft village ideas! Each village has a specific theme to it that is fantastic depending on what you are looking to achieve. We highly recommend you take a look at these builds if you have some extra time on your hands and want to create something fun!

You’re likely to be a bit burnt out after completing any of these village designs because they require a bit more effort than more simple builds, so we recommend you take a look at the best Minecraft mansion ideas and the best Minecraft temple ideas.

The very first design we have on this list is massive since it’s a fairly large village attached to a port, so you need to build it near a coastline. The entire perimeter of the village is made of stone so it appears sturdy, and the interior is filled with houses and merchant shacks so you can even include some more players and enjoy some medieval multiplayer action. This is one of the best Minecraft village ideas because it’s a classic idea executed perfectly.

Moving on, we now have the Japanese village. This one is not nearly as large as the last entry, so you don’t have as much work to do. The general theme of this village is a chill atmosphere where you can do your work modestly and enjoy your time there. There is a considerable deal of foliage around the whole village further accentuated by a fish pond in the middle, so it looks very nice while being functional as well.

Jungle villages are a fantastic concept and can be counted among the best Minecraft villages ideas simply because it is unique compared to other ideas. The concept of building your houses in the trees is very dynamic because crossing between houses with rope bridges makes you feel more adventurous, with the added benefit of being highly functional. This village design in particular is meant to be a tribal village with many houses in the trees, depending on how large your jungle biome is. We highly recommend this build for players who like to play in multiplayer and want to make the experience more interesting.

Village building doesn’t always have to be from the ground up since you can always use a naturally-spawning village and build upon it. This village is that exact thing, where the creator used a normal desert village and expanded it by adding fortifications, houses, decorations, greenery, as well as fountains, and other water elements to give it more life in the dry climate of the desert. This build is awesome and you should absolutely check it out!

Everything revolving around fairies in Minecraft is great because the general theme around these things is very whimsical and lovely. This village design, in particular, is very large, with many established, detailed buildings and other decorations that denote fairy aspects. You’ll notice the vibrant colors and out-of-the-box building ideas that will give you all of the serotonin you need.

The next village we have is great for those of you who like fantasy and fairies because it has a whimsical feel to it on top of looking very nice. The general idea of this village is that it has some mushroom houses strewn about it, and wooden paths that connect every house to one another. When it comes to the finer details, you will notice that the ground around the village is also spotted with colors other than green, so the color really pops. We highly recommend this build if you’re looking for the best Minecraft village ideas.

Building your own little cabin in the woods in the middle of a freezing snow biome is a great way of making yourself feel cozy. While snow cabins are a great thing to build, a snow village is on a whole other level. This build is more of a small town than a village, but we’re not going to be smart about the structure licensing. The general idea of this village is that it’s ideal for multiple players, but also for just you if you want more immersion in your world.

The next awesome village design is another innovative one because we’re going to be taking the base of a standard Savanna village and improving upon them. The Savanna biome is usually quite visually appealing, and building your own village seems like a great idea. This village build, in particular, includes a ton of different buildings that match the aesthetic of the Savanna, making for some nice multiplayer action. When it comes to the decorations, you can add more or less depending on what you want, but otherwise, the best thing to do is to just follow the instructions in the video.

You’ve probably noticed the beautiful architecture on some TV shows like Vikings where everything looks pleasant, rustic, and built up from hard work. This Minecraft village idea takes inspiration from the Vikings and their sailing prowess, choosing to build this village near water so you can also build some ships. The structures are made of wood and stone, just like in medieval times, and they are not too complex so you can get it done in no time. If you’re feeling especially lazy, this build can also just be downloaded!

Mountains are another popular building location because they are usually quite nice to look at on top of providing an interesting building challenge. Since you don’t have a lot to work with on sheer mountain cliffs, you can look to this build for inspiration. The original creator made a point to hollow out various points of the mountain and use wooden bridges to bridge the gap (hehe, get it?). We highly recommend this Minecraft village build if you want to express your inner dwarf.

Our next village design doesn’t have any specific theme to it since you can essentially just build it anywhere, and that’s the beauty of building anything in Minecraft. Since the village is arbitrary according to your needs, you can change up any aspect of it to accomplish what you want. Need an extra enchantment room? Build one. Need a bigger stable? Yep! You’re completely free to expand on the basic design of this village, and we’re all for it!

Over the last few updates, the Nether has seen some excellent quality of life improvements by adding extra biomes and new interesting blocks to build with. One of the new biomes you can explore is the Warped Forest, a very nice-looking teal forest without any hostile mobs. Because of the lack of danger there, it’s an ideal place to build a village! Check out the video below this to get all of the details on how to build this village. It’s relatively simple, with matching colors and some added utility.

Another transformed village! Tundra villages look very cool on their own, but this village build improves upon the base design massively. To be fair for this one, you’re probably going to need a few friends to help you since it’s a massive project that takes up a lot of space. Nonetheless, once you’re done with this build, you can take a step back and appreciate it for all of its grandeur. It’s an especially interesting build if you’re a fan of snow biomes.

Now we have an extremely innovative Minecraft village design that takes a different approach to aesthetics than other villages on the list. Where others are medical, rustic, and old-timey, this one is completely sleek and modern, focusing on stark white buildings, modern add-ons, and decorations that are very pleasant to the eye. It is really not that difficult to complete the build since this is another transformation build, so you can just replace all of the base blocks in a naturally-occurring village with the new blocks.

And finally, the village we have now takes inspiration from the best western movies of all time, featuring complex buildings with a lot of character to them. There is a saloon, stables, and living quarters, and you can, of course, add anything you might need like different utility buildings. Western motifs are always interesting to take on in Minecraft, and this is one of the best Minecraft village ideas because it does everything so well.

There you go, 15 of the best Minecraft village ideas you can take on right now and prosper. As you can see, there are tons of different themes in these villages so you’re bound to find something that appeals to you and make it your own. If you’re ever looking for more games that aren’t Minecraft you should take a look at the best war games, best tank games, and the best WW2 games.