Need to enhance your Minecraft Pocket Edition experience? Take a look at some of these shaders! 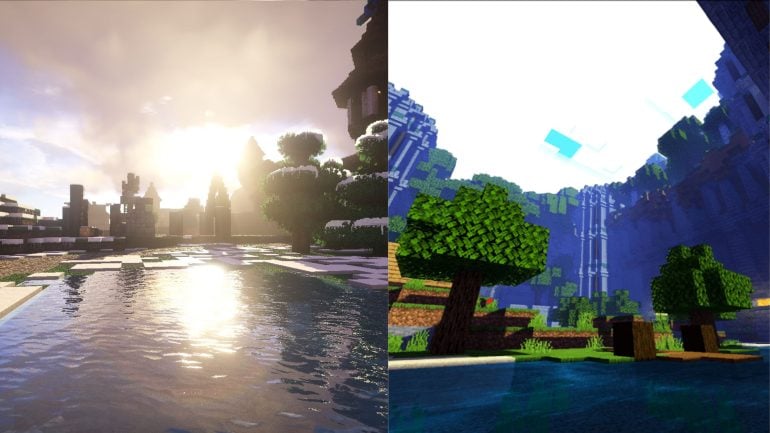 Minecraft Pocket Edition is a fantastic way of bringing this amazing game to a wider audience so more people can enjoy it. The mobile version of the game is very well-made and optimized for any phone. Because of this, you can enjoy the game as much as you want, whether it be on the train or in the bathroom, anything goes.

Just like the PC version of the Chocapic shaders, this shader pack is fantastic for anyone that wants to increase the graphical quality of your game without making your phone explode. These shaders have a great number of texture upgrades as well as ambient improvements. This is quite noticeable when you step out into the rain or stand near some lava. The weather feels more impactful and the lighting is fantastic. If you’re ever looking for a good shader pack that doesn’t have high requirements, Chocapic Shaders are for you!

The most noticeable feature of these shaders is the water quality improvements. The water is very blue and dull in the Pocket Edition of Minecraft, and Bicubic shaders make the water feel more vibrant and immersive. They make the water more transparent so you can better plan out mining and fishing since it’s so nice to look at. Of course, water is not the only part of these shaders as they also improve many aspects of the game for the better.

Many shaders focus on drastically changing the look of your game, whether it be by adding huge lighting improvements or completely changing the physics of the game. However, here we have some shaders that change minor things in the game, such as improving particle physics, making plants look better, and anything else you can think of! Check out ESTN shaders if you need something subtle, but not too powerful.

This is another shader that is relatively subtle, while simultaneously improving the graphical quality of your game. While this is nothing amazing, it is still enough to instantly notice that the game looks much better. When it comes to the changes to the game, you will notice that the lighting is great, the ambiance is improved, and the water looks fantastic. The Natural Mystic Shader is excellent and quite optimized so you can use it no matter the strength of your phone.

Continuum Shader is fantastic because it doesn’t feature the same level of saturation and jarring changes that other shaders have, and that is what makes it so good. When you apply this shader to your game, you’ll notice a drastic improvement to the lighting in the game, as well as small changes to particles, plants, and ambiance. If you’re ever in the market for a fantastic shader that is perfect for subtlety and a chill vibe, Continuum Shader is for you!

And there you have it! The best shaders for Minecraft Pocket Edition! We’ve included five of the best shaders that you should try if you want to spruce your game up. If you’re also looking for other games to play besides Minecraft, you should take a look at the best Android games, the best free PC games, and the best horse games!